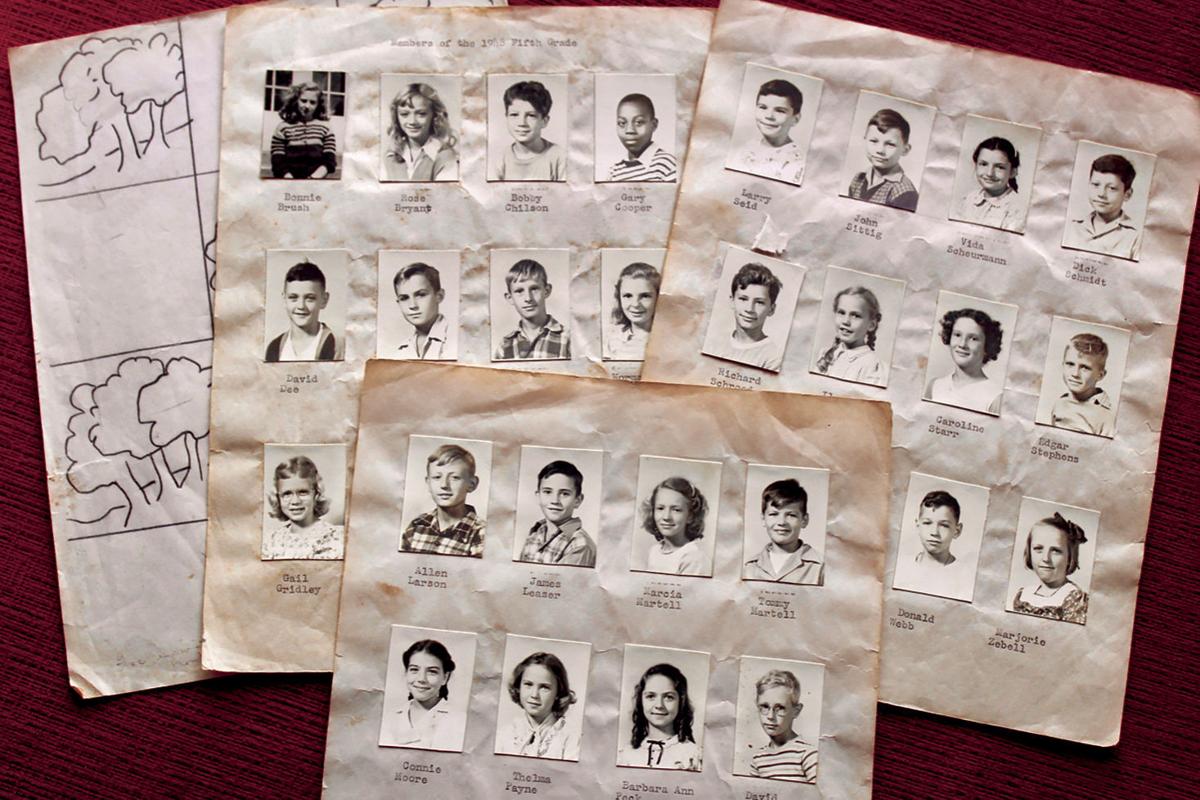 Jean Curren’s 1947-48 fifth-graders who produced an “And Still We Grow” book on Three Oaks history which contained Jesse Otis’ account of his time in the village. 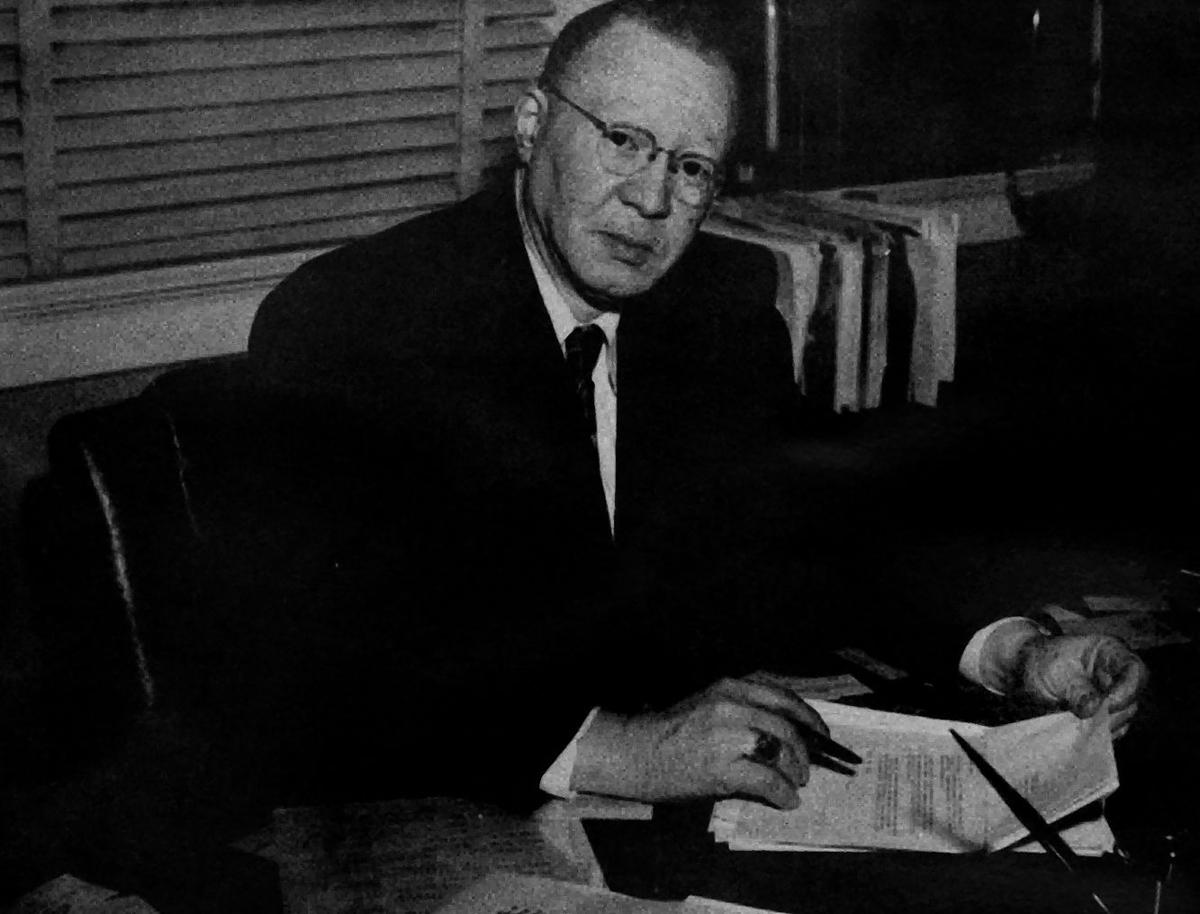 A photo of Jesse Otis when he was president of Alcorn A & M in Mississippi.

Jesse Otis is seen in this 1925 Iowa State University yearbook photo. He graduated from Three Oaks High School in 1920, and later received degrees from Cornell University.

Jean Curren’s 1947-48 fifth-graders who produced an “And Still We Grow” book on Three Oaks history which contained Jesse Otis’ account of his time in the village.

A photo of Jesse Otis when he was president of Alcorn A & M in Mississippi.

Jesse Otis is seen in this 1925 Iowa State University yearbook photo. He graduated from Three Oaks High School in 1920, and later received degrees from Cornell University.

He would go on to earn a PhD from Cornell University, and serve as president of Alcorn A&M in his home state of Mississippi.

Local historian and documentary filmmaker Nick Bogert recently wrote an article for the Summer 2020 edition of The Michigan Historical Association’s The Chronicle entitled “Four Years in Three Oaks: Jesse Otis in Michigan.” In November 2020 he spoke to members of the Rotary Club of Harbor Country about the time Otis spent in this area – a story he discovered thanks to a 1940s Three Oaks Elementary fifth-grade historical project.

Bogert said Otis had never been more than 50 miles from his home in Carson, Mississippi (where he was born in 1899), before he came to Michigan 1916 to become the first Black student at Three Oaks High School – by about 30 years.Bogert said while Otis was attending the Piney Woods School, located about 43 miles from Carson, school founder Dr. Laurence Jones was at an agricultural convention in Lansing, Michigan, where he met Three Oaks farmer Zach Kinne (Kinne raised prize-winning Poland China hogs and had a Jersey cow dairy herd at his at the Spring Brook Farm outside of Three Oaks).

Bogert said Jones worked out an arrangement to have Otis (Piney Woods’ “Most Industrious” student) live with Kinne, work on his farm, and attend high school in Three Oaks.

In his Chronicle article, Bogert wrote; “At first, the 14-year-old was overwhelmed. The Kinnes lived miles from village schools, and burdened their visitor with so many chores, Otis complained he couldn’t stay awake in class. School officials noticed, and arranged for Jesse Otis to stay instead with Dix and Ella Beeson.”

Bogert said Dix Beeson was “one of Three Oaks’ leading citizens,” having been elected village president and a village supervisor who was credited with “leading the efforts to put in hard roads to replace the dirt streets that got so muddy.”

Beeson was a former pharmacist who (with partners) ran a dairy and mint-growing farm (the winter market was booming due to Wrigley’s Spearmint and Doublemint gums).

Bogert said after reporting that his hands sometimes cramped from milking the farm’s Holsteins, Otis “fixed an old, broken milking machine which freed up himself and a lot of workers for other tasks.”

Bogert said Otis’ relationship with Dix Beeson “became more and more that of father and son.”

“When he was a senior, Jesse Otis took over the milk route in town for Beeson’s Dairy, a way that he could make some money for college.”

Bogert noted that Otis later said the milk route “built hundreds of friends for me,” adding that he was perhaps best known to many for training “Beauty,” a dapple-grey Percheron “who could be made to turn a wagon from a block away by merely talking to her.”

He said Otis wrote a letter of thanks to Three Oaks residents when he departed for college in the summer of 1920 (published in the local paper The Acorn) that stated: “The experience which I have gained in this community could not be replaced with a million dollars worth of drilled training.”

At the same time Otis was attending school in Three Oaks, Bogert said minstrel shows were being staged at the Acorn Opera House (which stood at what is now a parking lost next to the Vickers Theatre).

“A few years later a cross would be burned at the corner of Ash and Elm streets as the Ku Klux Klan celebrated reaching 500 members in the area.”

But Otis later wrote of an overwhelmingly positive experience living with the Beesons.

“The fine atmosphere of culture to which I was exposed in their home is largely responsible for my later idealism. They are the kind of people who made this country the great nation it is.”

Bogert said Otis earned a degree from Iowa State – an institution which had previously been attended by George Washington Carver who got a bachelor’s degree in 1894 and stayed on to become the university’s first Black professor.

“Dr. Carver was a botanist and a horticulturalist, while Jesse Otis majored in Animal Husbandry. After graduation Jesse Otis taught at the Piney Woods School for a time, but within three years he’d gravitated to Tuskegee Institute where George Washington Carver was president,” Bogert said.”He worked alongside Dr. Carver for seven years, adding that Carver was ‘all and more that publicity had credited him.’”

Otis went on to earn a Masters Degree in 1933 and a PhD in 1944 (both in in Agriculture and Life Sciences) at Cornell University.

“His dissertation was entitled ‘Changes in characteristics of the type of farming area in Alabama, 1880 to 1940,’” Bogert said.

In 1946, Otis was named president of Alcorn A&M, a historically Black college in his home state of Mississippi.

“A history of the college says that he oversaw ambitious building programs there, and that he tried to beef up research at Alcorn,” Bogert said.

His tenure as president ended in 1957 after an Alcorn history professor wrote a series of articles for the Jackson State Times linking the NAACP to communism and criticizing Congressman Adam Clayton Powell.

“Alcorn students were outraged and they organized a boycott (demanding that the professor be fired). Within a week 500 of the school’s 571 students were taking part.”

Bogert said Mississippi’s pro-segregationist governor, James Coleman, fired Otis and told students they would be expelled and barred from attending any state schools if they did not end the boycott.

Bogert said he believes Otis went back to Tuskegee Institute after that. He died in 1970 (survived by a wife named Franke).

Bogert said he found out about Jesse Otis thanks to a project undertaken by a fifth-grade class at Three Oaks Elementary in the 1940s. Teacher Jean Curren had her students research and write a local history entitled “And Still We Grow” during the 1947-48 school year (he said the project won a national award and is “really fun to read”).

“The kids wrote Jesse Otis a letter asking him to describe his time in Three Oaks, and he responded with a six and a half page letter extolling his four years in Three Oaks and noting “The happiest school days of my life were spent in Three Oaks. I shall forever be grateful for knowing the fine people of Three Oaks and for the opportunities which were opened to me.”