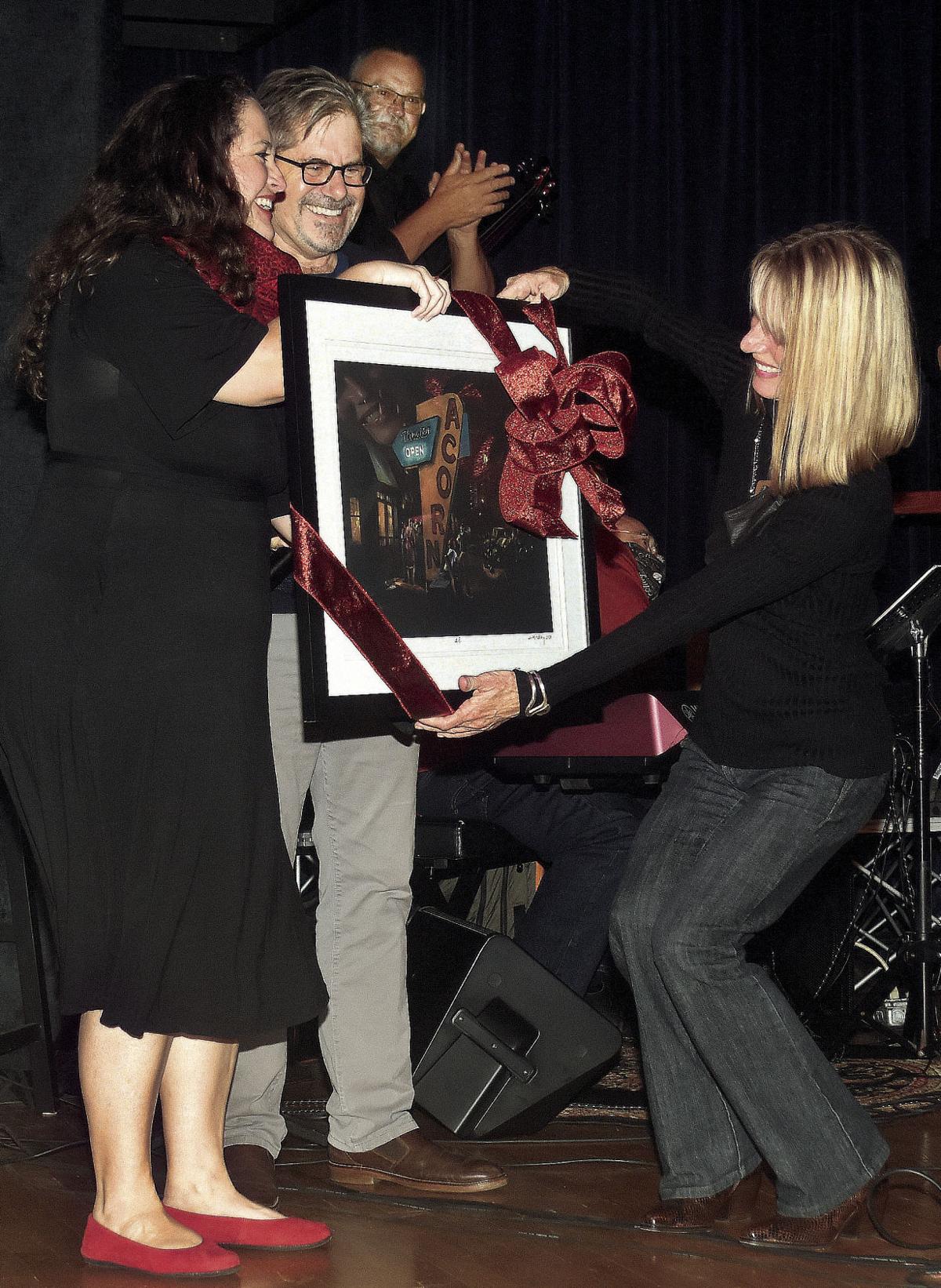 Sandra Thompson (right) is presented with the “Open Mic” Joe Hindley print by Beth Kaskel and Tom Abrahamson on Nov. 11. 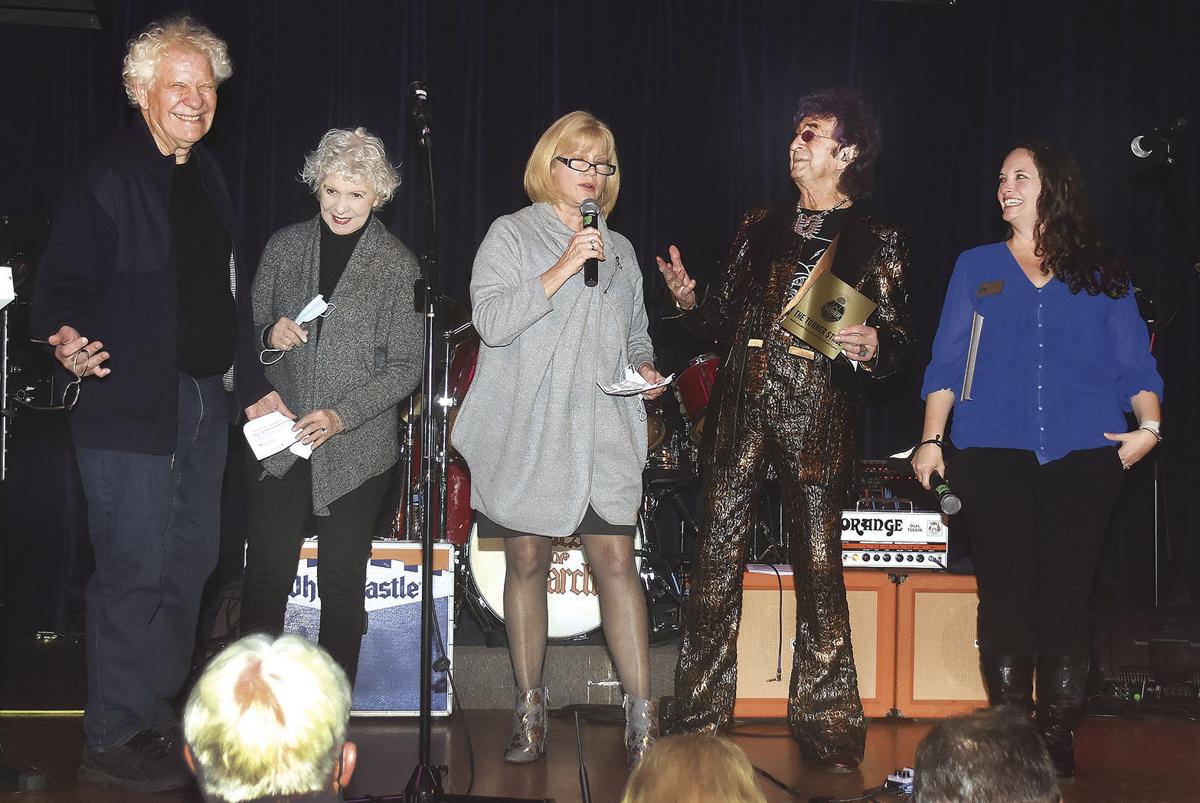 Allen and Lynn Turner, Janet Davies, Jim Peterik and Beth Kaskel on what will soon be identified as The Turner Stage at the Acorn. 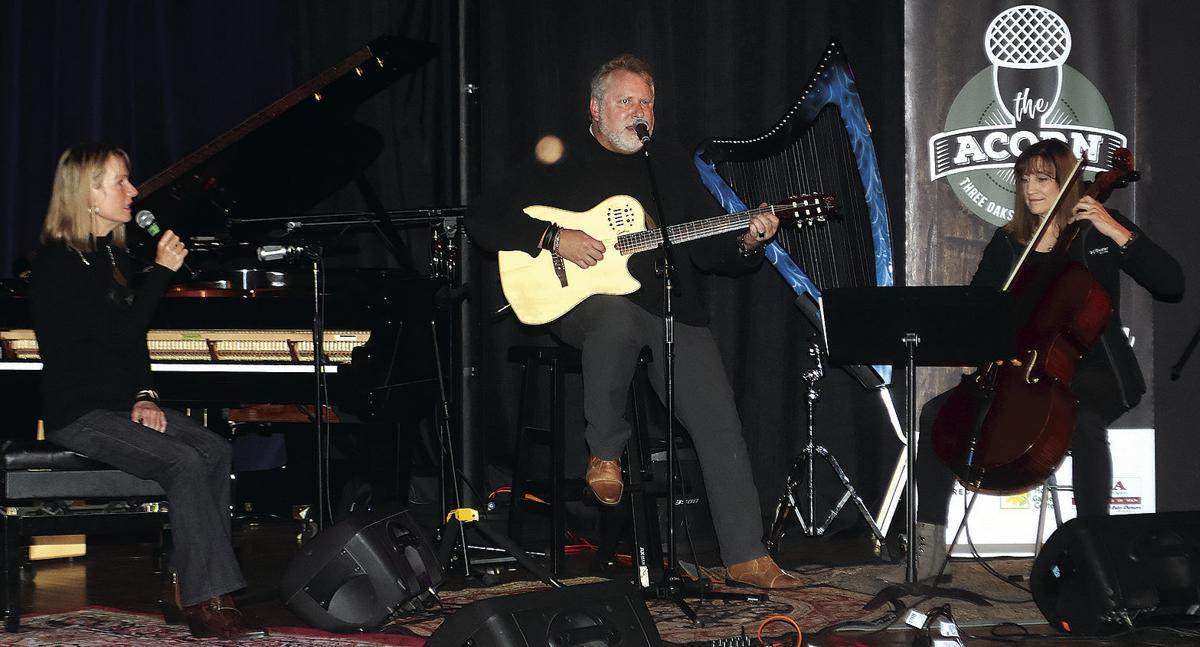 Sandra Thompson perofrms with with Brian Lubeck and Michelle Rumsa (from left) during the Nov. 11 OPen Mic Night at The Acorn. 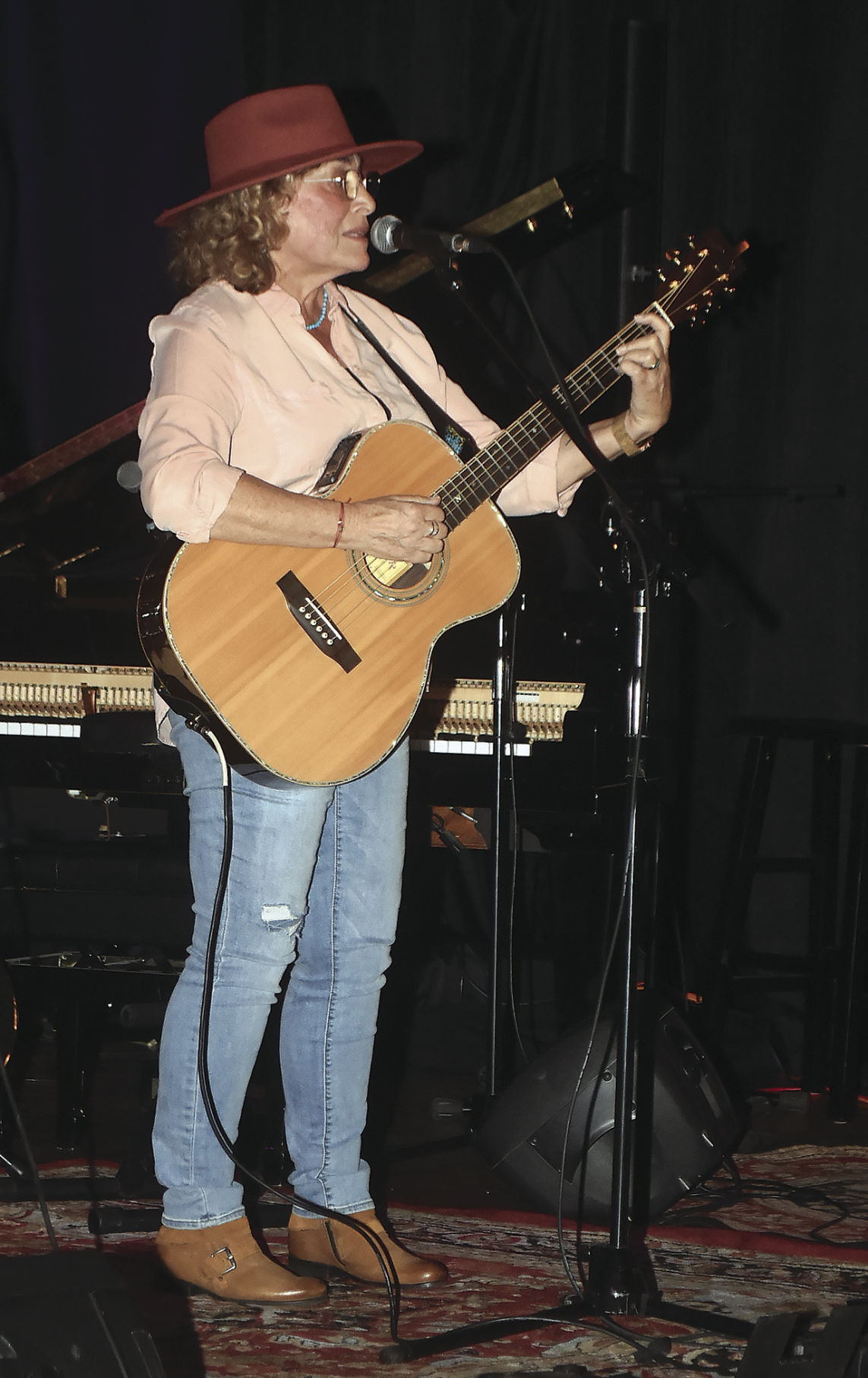 Patty Shaffner performs during the Nov. 11 Open Mic NIght at The Acorn.

The Ides of March perform on The Turner Stage at the Acorn on Friday. Nov. 12.

Sandra Thompson (right) is presented with the “Open Mic” Joe Hindley print by Beth Kaskel and Tom Abrahamson on Nov. 11.

Allen and Lynn Turner, Janet Davies, Jim Peterik and Beth Kaskel on what will soon be identified as The Turner Stage at the Acorn.

Sandra Thompson perofrms with with Brian Lubeck and Michelle Rumsa (from left) during the Nov. 11 OPen Mic Night at The Acorn.

Patty Shaffner performs during the Nov. 11 Open Mic NIght at The Acorn.

The Ides of March perform on The Turner Stage at the Acorn on Friday. Nov. 12.

THREE OAKS — The Acorn Theater bade a fond farewell to longtime Executive Director Sandra Thompson on Nov. 11, and on the next evening officially dedicated the Allen Turner Stage.

Both milestone events took place on evenings filled with music.

Thompson, who has been involved with the Acorn Theater for nine years, serving as executive director until 2021. She has been the theater’s artistic director for most of this year.

“It’s been the most incredible job I’ve ever had,” Thompson said. “It’s a great honor to have worked here.”

“Tonight is Sandra’s last Open Mic as a staff member here at the Acorn. It will not be here last Open Mic either as a patron or as a performer I am sure,” noted Acorn Executive Director Beth Kaskel on the evening of Thursday, Nov. 11.

Indeed, Thompson went out on a high note by performing with Brian Lubeck and Michelle Rumsa.

Thompson also was praised by Open Mic Night performers including Brian Kanyer and Patty Shaffner for her support of area musicians over the years.

“I wouldn’t be here without Sandra,” Shaffner said.

“I wouldn’t miss this for the world, it’s been a pleasure … Thank you, you’ve welcomed me into this place, you’ve opened the doors and you’ve given me wonderful times under the stars,” Carey said

Acorn Board of Directors Chair Tom Abrahamson (speaking on behalf of the board) shared some thanks and praise about Thompson.

“Sandra began her work here in 2013 as the theater’s general manager when the Acorn was a for-profit business – The vision of founders David Fink and Kim Clark.”

Abrahamson said Thompson has conducted hundreds of events over the years and came up with innovative programs such as Open Mic Nights, Acorn Homegrown, the Singer Songwriter Competition, and live radio shows.

During the pandemic, he said Thompson orchestrated “a stunning pivot” and created dozens of Acorn Anywhere outdoor concerts which enabled the entity to survive “18 months when this theater was dark.”

In what Abrahamson called “a bold move” in 2016, to expand the theater’s regional impact while putting it on a path “live on what we hope is forever,” Thompson led the complex effort that converted The Acorn into a non-profit organization.

“In just five years under Sandra’s leadership and relentless devotion, The Acorn has accomplished what typically takes decades, and often never even happens at most other non-profits.”

He said today The Acorn is a thriving, growing organization with limitless opportunities ahead of it, “and I credit this success to Sandra’s skills and experience in the performing arts business, her unstoppable energy and her contagious enthusiasm that has resulted in the loyal and devoted patron base, our artists, and an army of volunteers and donors.”

Abrahamson said Thompson also has helped Kaskel make a successful transition to the role of executive director. He added that she recruited many members of the board of directors, which has worked alongside Thompson to strengthen the theater.

“Simply put there would be no Acorn as we know it today without Sandra Thompson.”

Acorn Board member Bob Beemer noted – “The sense of community that Sandra envisioned and orchestrated, she created a theater with a warm, inviting feel, a place you have to bring your friends, a place where magic happens.”

“We’re really grateful, and you will be missed,” Kaskel said.

She also thanked reserve seat donors prior to the start of Open Mic Night performances.

“We are a non-profit, and your support helps us to grow and offer great programming to our community.”

Kaskel also gave a shout-out to The Acorn’s volunteers.

“We could not do half of what we do around here without our volunteer support” adding information on becoming a volunteer is available at acornlive.org.

Another special ceremony was held Friday, Nov. 12, ahead of a well-attended concert by The Ides of March.

“We are very honored to finally give a long-overdue recognition to Lynn and Allen Turner for creating this beautiful stage we have here,” said Acorn Board member Janet Davies.

Allen Turner said when he met David Fink and Kim Clark 20 years ago it was love at first sight, “and they launched this great adventure.”

He talked about the many concerts, plays and other presentations that have taken place in The Acorn over the last two decades, witnessed by many audiences.

“Lynn and I have been proud to be supportive and to be helpful in all of this happening,” Turner said.

Davies said “it was Lynn and Allen who brought us here the first time to 16, 17 years ago to see the Weird Sisters.”

“If you’re really lucky, and we’ve done our job, you may see something that the world has never seen before, on this stage,” Allen Turner noted.

He later joked “I will have to update my wardrobe” (in reference to Ides of March singer Jim Peterik’s colorful stage garb).

Peterik presented Lynn and Allen Turner with a facsimile of a Turner Stage plaque that will soon be permanently put in place.

“This will be re-branded the Turner Stage at The Acorn” … and the reason is the generosity of this couple right here, who have not only given to the Acorn, but given so much to the arts community here in Three Oaks and in Chicago,” Davies said.

She added that Allen Turner has been the board chair of three theaters in Chicago – the National Jewish Theater, Victory Gardens, and the Goodman Theater along with Columbia College, and also is the chair of the Contemporary Art Museum in the Windy City.