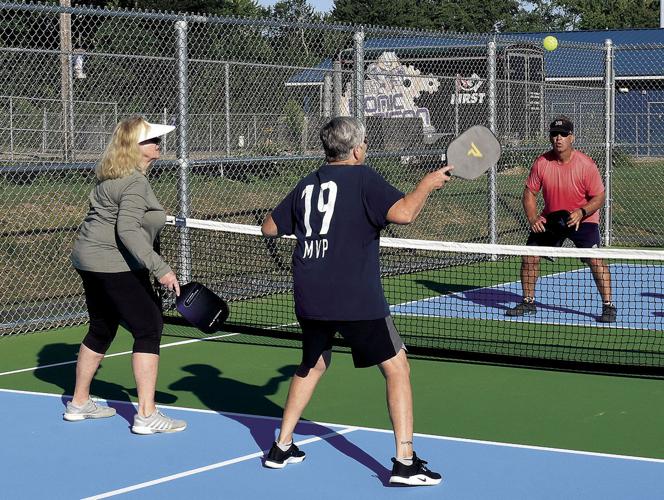 Sarah Everett (center) swats the pickleball toward Chad Gradowski (right) while Linda Fortino looks on during one of the first Aug. 27 matches played on New Buffalo’s new courts. 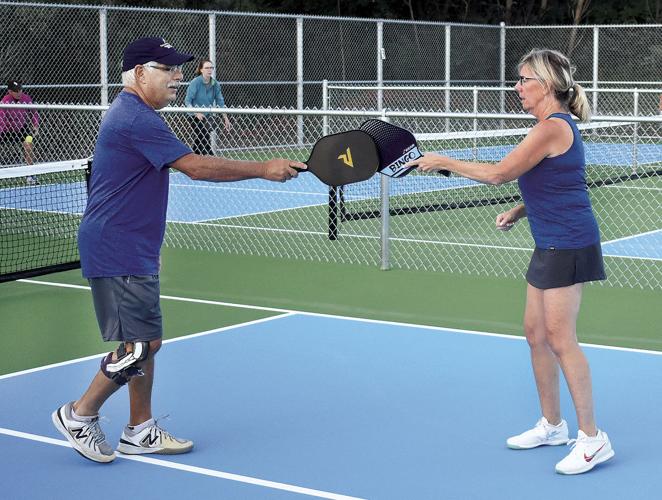 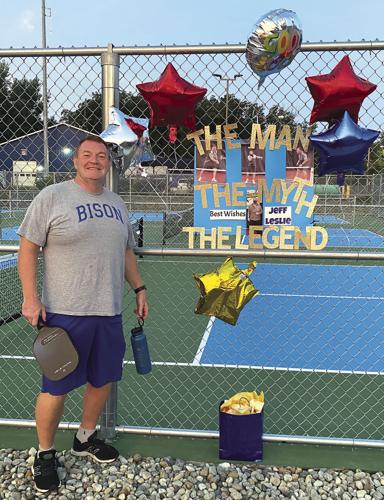 Dr. Jeff Leslie at the new pickle ball courts on Aug. 28 with a farewell message assembled by his fellow players. 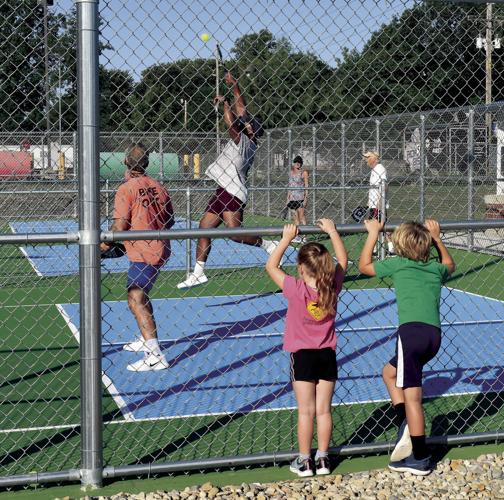 Watching the high-flying pickleball action in New Buffalo on Aug. 27. 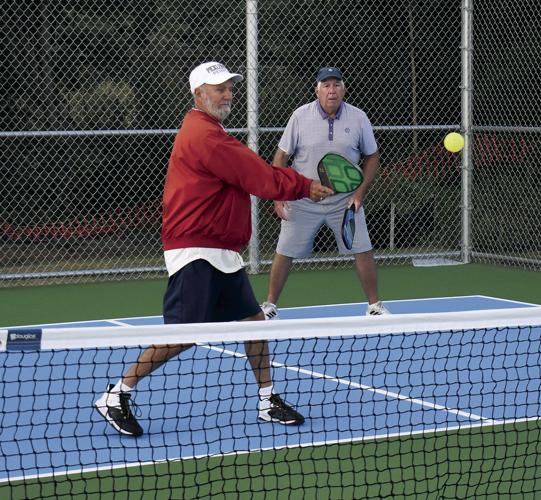 Les Wycoff (left) and Vaughn Gordy in action on the new pickleball courts constructed as part of a New Buffalo Area Schools project anchored by a STEAM Building. 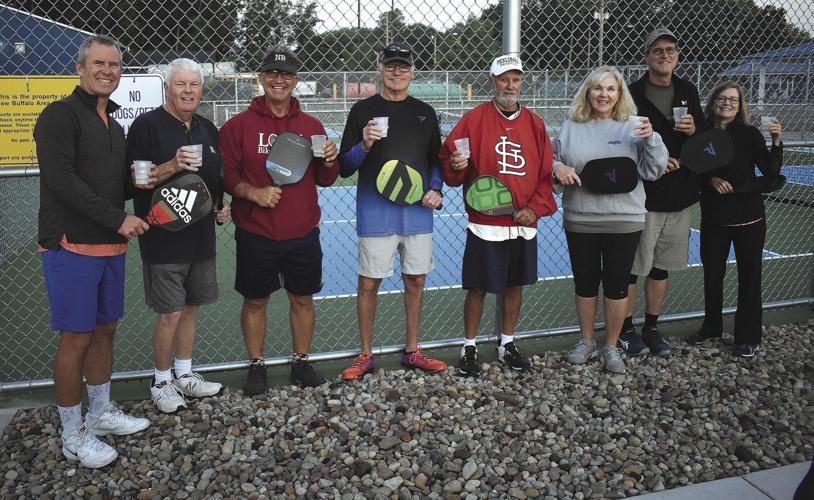 Toasting the new pickleball courts on the morning of Aug. 27. 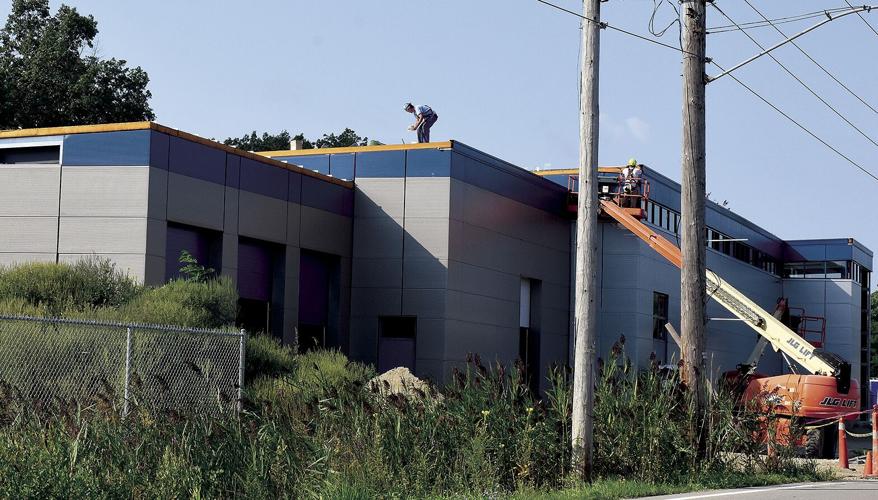 Sarah Everett (center) swats the pickleball toward Chad Gradowski (right) while Linda Fortino looks on during one of the first Aug. 27 matches played on New Buffalo’s new courts.

Dr. Jeff Leslie at the new pickle ball courts on Aug. 28 with a farewell message assembled by his fellow players.

Watching the high-flying pickleball action in New Buffalo on Aug. 27.

Les Wycoff (left) and Vaughn Gordy in action on the new pickleball courts constructed as part of a New Buffalo Area Schools project anchored by a STEAM Building.

Toasting the new pickleball courts on the morning of Aug. 27.

NEW BUFFALO — There are a lot of loyal pickleball players in New Buffalo, and many of them showed up bright and early on Saturday morning, Aug. 27, for the debut of a new six-court complex located across Clay Street from the New Buffalo Area Schools football field/track facility.

“It’s beautiful. It’s got to be one of the best facilities in the State of Michigan,” said Les Wycoff, a regular at daily New Buffalo pickleball sessions typically held from 7:30 to 10 a.m. and in the afternoon beginning around 5 p.m.

One of those playing the first matches on the new courts was Linda Fortino.

“We’ve been waiting a long time for this – real exciting!” she said, adding that the new tennis court-style surface on the brightly painted surface was much more comfortable for competition that the old facility.

“It’s hard on your body to play on concrete, and most of us are older.”

Seattle resident Andrew Smith, 29, who was visiting his wife’s parents in New Buffalo on opening day said, “I used to dabble in tennis but when a friend introduced me to pickleball, I immediately was hooked.”

A group of early arrivers toasted the new court with shouts of “Cheers!”and “Pickle!” before New Buffalo Area Schools Director of Facility Operations Keith Carlson unlocked the entrance gate to make it official.

There were so many pickle ball players on hand for the morning session Aug. 27 that some overflow matches took place on the old courts, a four-court space up the street closer to the under-construction STEAM Building.

Carlson said the old pickle ball space will soon be occupied by a new skate park and multi-surface basketball court.

A pavilion that includes rest rooms has been built by the New Buffalo Area Schools adjacent to the new pickle ball courts, and Carlson said it is expected to be open soon (a final electrical inspection was slated to take place during the week of Aug. 29-Sept. 2).

Carlson said COVID and the ensuing supply chain and trades worker shortage issues have made the entire construction project a challenge.

He said the goal with the STEAM building is to “be in there over Christmas break.”

One of those enjoying the new courts was involved in introducing the sport to New Buffalo.

“10 years ago, I started playing the game at The Villages in Florida where I spend the winter. It was catching on everywhere so I tried to figure out how to bring it here,” said New Buffalo resident Kris Jacobs, noting that she taped the tennis courts at the high school and got a few people playing.

She then approached former superintendent Mark Westerburg about putting temporary nets on the concrete area next to the skate park and the game immediately caught on.

The high school eventually added pickleball to the physical education program after Dr. Jeff Leslie came to the district six years ago, and he soon joined in the fun.

Leslie, who begins his new position at superintendent at Petoskey on Sept. 1, received a warn farewell send-off at the New Buffalo pickle ball courts on Sunday, Aug. 28.

Pickleball players use the app “Team Reach” to schedule games at other times during the day. There are 215 members registered on the local Team Reach app.

• In 1965, Washington state congressman Joel Pritchard and businessman Bill Bell created the game in Bainbridge Island, Washington. They improvised a badminton game using table tennis paddles and a perforated plastic ball. Finding that the game worked better on asphalt and with a lower net (36 inches) their group of family and friends were responsible for the first pickleball game.  The original purpose of creating the game was for a game the whole family could play when they were bored.

• There are 2 rumors about how the name pickleball came about. One is that the Pritchard’s thought the game reminded them of the pickle boat in crew where oarsmen were chosen from the leftovers of the other boats.  The other is that the “Pickles” was the name of their dog.  (Facts show that their dog came along after the game was created.)

• In 2005, the USA Pickleball Association was established.

In 2021 and 2022 the sport was named the fastest growing sport in the United States by the Sports and Fitness Industry Association, with over 4.8 million players.