You have permission to edit this article.
Edit
Home
News
Features
Sports
Photo Galleries
Opinion
Obituaries
Community
Classifieds
Jobs
How Do I?
1 of 15 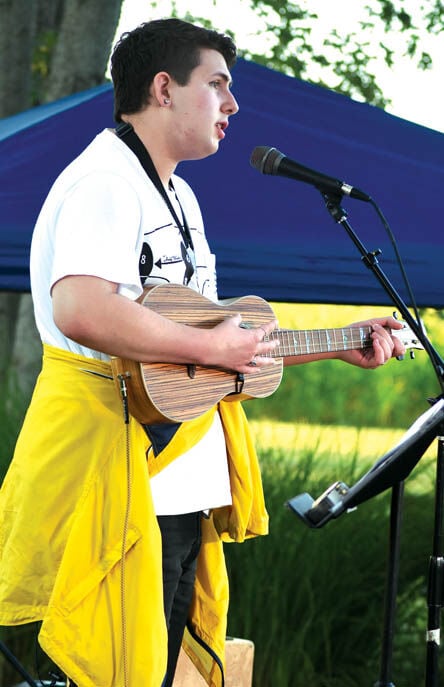 Dylan Reed Leavitt, the top finisher in the Aug. 13 Acorn Theater Singer Songwriter Competition, performs “Not One of You Yet” during the annual event held outside near a Three Oaks “Field of Dreams.” - photos by David Johnson 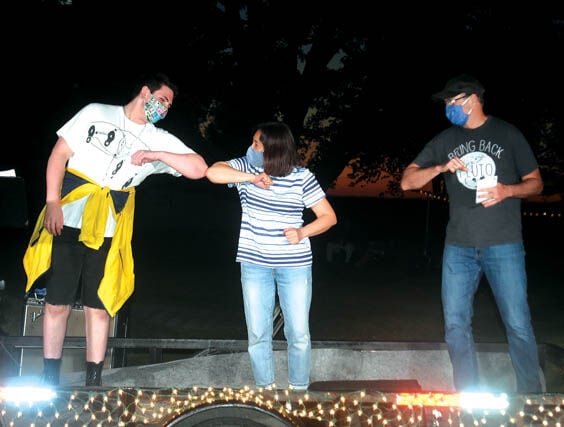 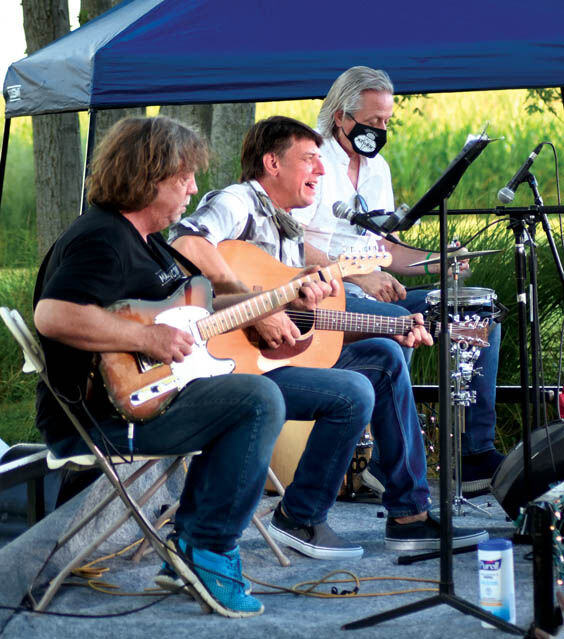 Jamie Wagner of Chicago and Three Oaks (with guitarist Brian Wilkie and drummer Larry Beers) performs “Back to New Orleans.” 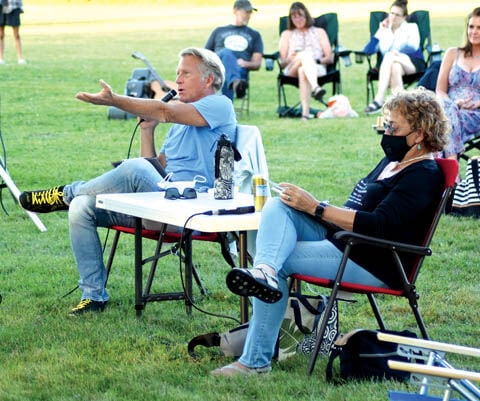 Singer Songwriter Competition judges Peter Carey and Patti Shaffner comment on one of the Aug. 13 performances. 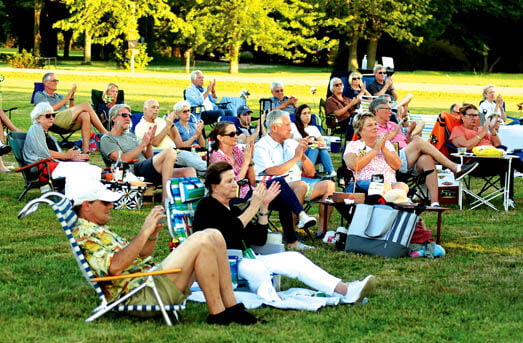 The socially distanced crowd applauds after hearing one of the six finalists play during the Aug. 13 Acorn Theater Singer Songwriter Competition. 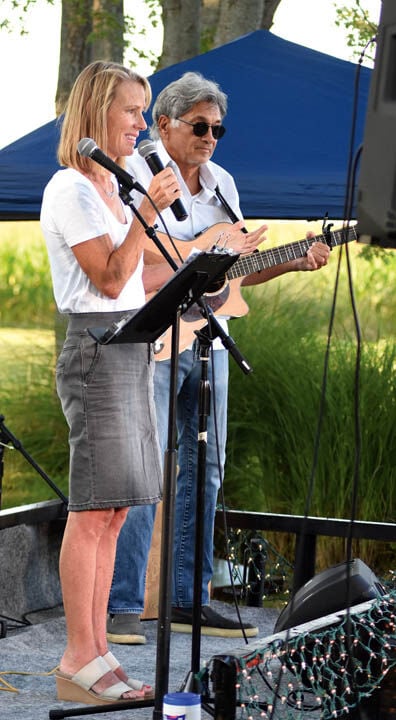 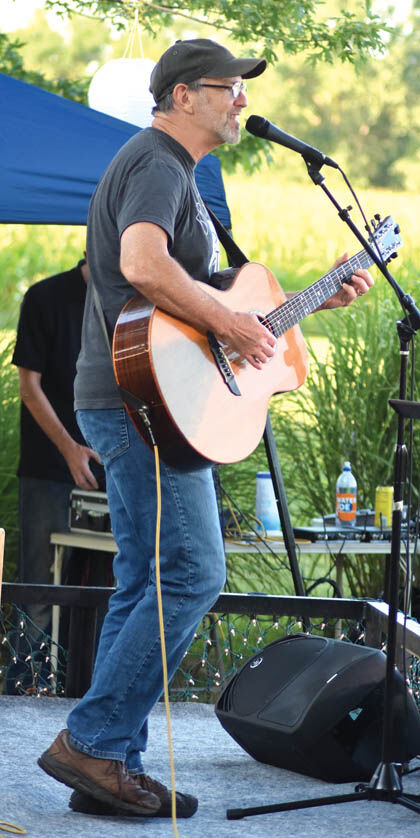 Singer Songwriter finalist Mami Matsuda performs “Where Have You Been?” 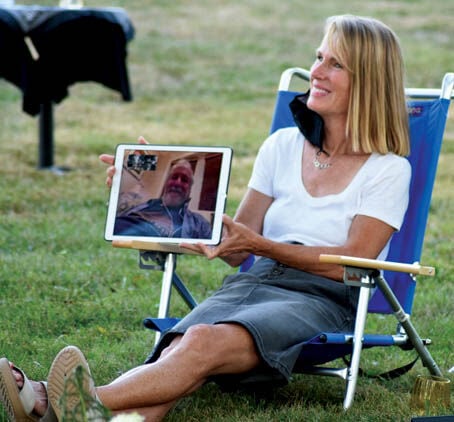 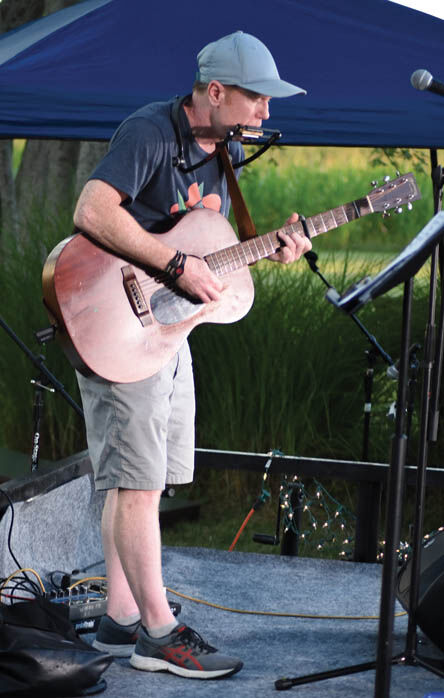 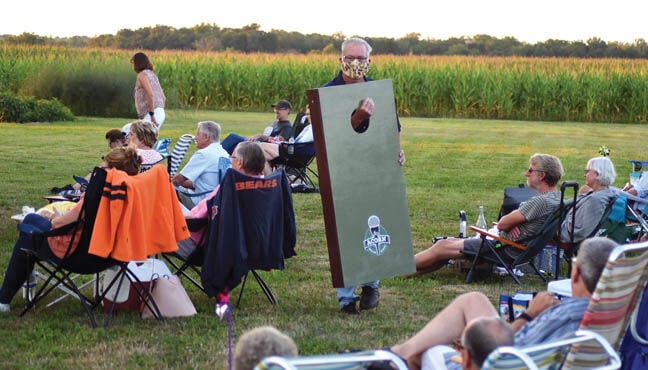 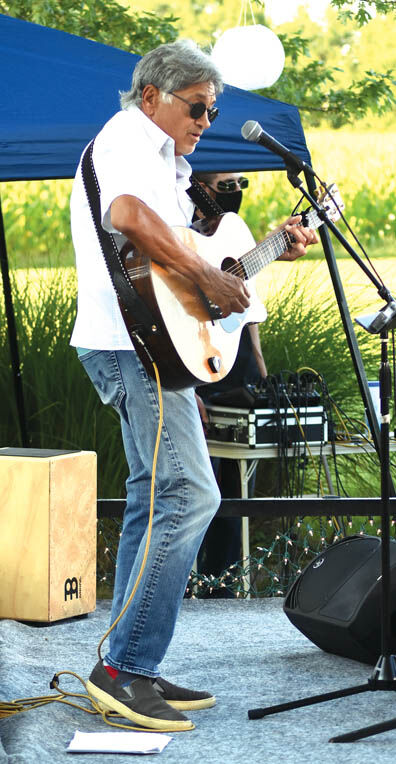 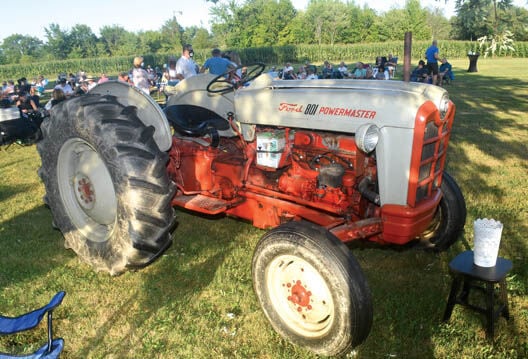 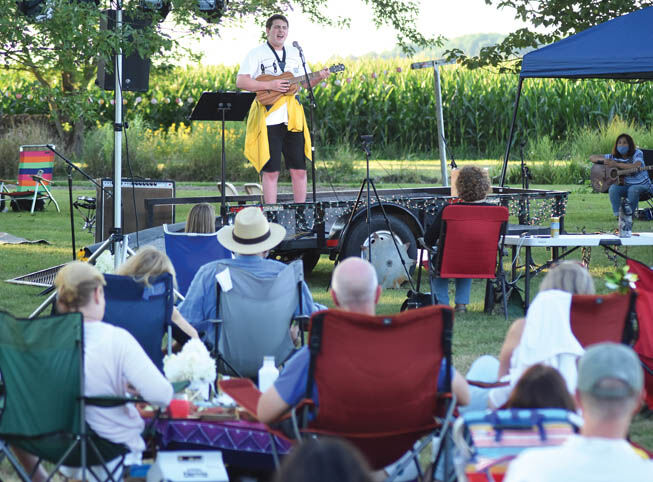 Dylan Reed Leavitt, the top finisher in the Aug. 13 Acorn Theater Singer Songwriter Competition, performs “Not One of You Yet” during the annual event held outside near a Three Oaks “Field of Dreams.” - photos by David Johnson

Jamie Wagner of Chicago and Three Oaks (with guitarist Brian Wilkie and drummer Larry Beers) performs “Back to New Orleans.”

Singer Songwriter Competition judges Peter Carey and Patti Shaffner comment on one of the Aug. 13 performances.

The socially distanced crowd applauds after hearing one of the six finalists play during the Aug. 13 Acorn Theater Singer Songwriter Competition.

Singer Songwriter finalist Mami Matsuda performs “Where Have You Been?”

THREE OAKS — The 2020 Acorn Theater Singer-Songwriter Competition was held in the great outdoors near Three Oaks on Thursday, Aug. 13, with six artists performing original songs for a panel of three judges who chose three of them for a second song. After another round of music by that trio, audience members selected the 2020 top three.

“Isn’t it great to get outside?” asked Master of Ceremonies Joe Bisceglia (who also performed at the beginning of the evening).

He said the eighth anniversary of the Acorn Singer Songwriter Competition continues the tradition of giving artists an opportunity to get out there “and keeps the whole idea … of original music and artistry alive.”

“It looks like the Field of Dreams out here. Let’s make it a wonderful night, enjoy Ravinnia style,” he said.

All six finalists performed on a trailer stage set up near the rural Three Oaks home of Jamie Wagner (one of the Singer Songwriter contestants) in the following order:

• Andy Baker of Gobles, Mich. (he performed “Skywriter,” inspired by a podcast about “the guys who go up in the airplanes and write words in the sky”).

• Dylan Reed Leavitt of Chesterton, Ind. (his original song was “Not One of You Yet” — which later prompted Judge Corky Siegel to comment “I don’t think you want to be one of them ever” while praising both the song and performance).

• Mami Matsuda of Valparaiso, Ind. (she performed “Where Have You Been?”)

• Jamie Wagner of Chicago and Three Oaks (with drummer Larry Beers and guitarist Brian Wilkie) performed “Back to New Orleans”).

• Timothy Gray of Chicago (who performed “Living My Best Life”).

According to the Singer-Songwriter Competition program, “This event format is similar to American Idol. Our judges will pick the top three from the first round. The audience picks the winner! With cash prizes totaling $1500, future performing gigs, networking opportunities and professionally edited videos for each contestant, this competition is a great experience for our finalists.”

Comments on each performance were made by all three judges (Peter Carey, Patti Shaffner and Corky Siegel, who did his judging and commenting remotely via an iPad).

A second round of performances by the top three as chosen by the judges — Baker (playing “16,”written in honor of his little sister), Leavitt (performing “If It’s Not Enough”) and Matsuda (“It’s Going to Be Allright”) — followed, with the audience both onsite and remotely then having their say.

After all the votes had been counted, the top three were: 1. Leavitt; 2. Matsuda; 3. Baker.

“This is a huge deal,” said Leavitt before his final performance of the evening.

During Bisceglia’s initial intro of Leavitt, it was noted that he speaks Japanese and sign language and has been writing music for about three years. The 16-year-old Chesterton High School student plays the ukelele, violin, guitar and piano.

Prizes were: First Place $1,000; Second Place $300; Third Place $200 (cash awards sponsored by Art Wible). All finalists receive video recordings of their performance and are considered for future performing opportunities, with the first-place winner guaranteed an opening spot for an established act.

The 2020 event was a fundraiser for The Acorn Theater, with online donations encouraged to help the theater “bridge the gap until we are back on the main stage.” A custom-made beanbag set was auctioned off (with performer Timothy Gray as the auctioneer) and many donations were made by members of the socially-distanced crowd. The number of tickets sold was limited to be in compliance with Michigan’s mandated safety standards for outside events. The event also was live-streamed.

Acorn Theater Executive Director Sandra Thompson said “one of her favorite events of the year” — which started in 2013.

• Peter Carey is a veteran of the entertainment industry with various acting credits in film, television, and live theatre. He has been a member of the performer’s union SAG-AFTRA for over 40 years, as well as enjoying longstanding membership in Actors Equity Association, the union for live theatre artists. In addition to his acting, he is a certified stunt driver for film and television projects. In addition to being a judge for the Singer Songwriter Finals, this evening, Peter has enjoyed volunteering as MC for Open Mic Night, the Denim Diamonds & Dancing gala fundraiser, and acting in the Spectacular Tournament of Playwrights at The Acorn Theater.

• Corky Siegel is known internationally as one of the worlds great blues harmonica players, blues pianist, singer-songwriter, and the sole pioneer/composer of award-winning revolutionary works that weave blues and classical forms together. Co-founder of the Siegel-Schwall Band and a Blues Hall of Fame Inductee, Siegel has a catalogue of recordings on RCA, Vanguard, Alligator, and million selling blues/classical recordings on the iconic classical label Deutsche Grammophon. His close associations with the blues masters in the earlier days of Chicago blues, his essential part in the blues rock revolution, and his surprising success in bringing together blues and classical audiences make him a pivotal (though stealth) figure in modern music history.

• Patti Shaffner, a singer/songwriter, actress, director and performance coach “often recognized for her dynamic stage presence and captivating vocals.” She has trained with Bobby McFerrin and Rhiannon (Mistress of Improvisational Singing). She has opened for the legendary Michael Smith, Dan Navarro and Special Consensus Bluegrass Band. She performs solo in jazz, folk, blues and with SongSisters, a folk trio in the Chicago-land area. Her songwriting has garnered numerous awards including twice First Runner-up at The Acorn and 1st in the Great American Song Contest in 2015.