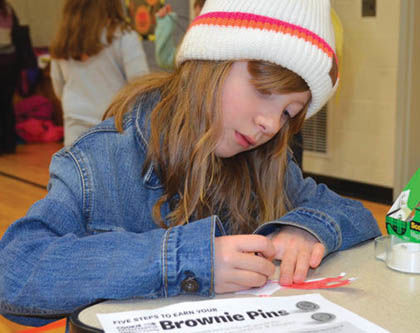 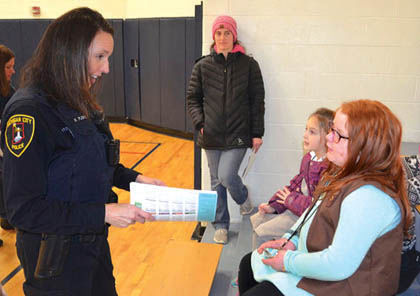 MICHIGAN CITY, Ind. – The Girl Scouts are back at it.

Starting Friday, Jan. 10, their iconic cookies were again available in the area. At a Jan. 8 Cookie Rally at Lake Hills Elementary School in Michigan City, area Scouts learned the basics of safe and successful selling, and sampled a few of the treats in anticipation of the upcoming sales season.

Some troops will also be selling limited quantities of the gluten-free Caramel Chocolate Chip cookie that debuted in 2017. It’s described as “rich caramel, semisweet chocolate chips and a hint of sea salt in a chewy cookie.” The Thanks-A-Lot cookie will be discontinued after this year’s selling season.

The cost remains the same – $4 per box – with the exception of the Caramel Chocolate Chips, which sell for $5 a box. The girls will be able to get more cookies to sell until March 8 and can technically sell through Sept 1. More than 1,100 cases of cookies are in the hands of troop leaders and ready for sale Friday.

Many Girl Scouts will have cookies on hand to sell while other troops take orders and fill them quickly. Customers can also find Girl Scout cookies at booths at various local businesses, including Lowe’s, both locations of Al’s Supermarket, and Walmart.

Besides offering the the tasty treats, cookie sales provide much more for the girls.

“It gives the girls experience at a young age in so many areas,” said Yvonne Bancroft, who manages local Service Unit 203, which comprises Michigan City; and New Buffalo and Three Oaks, Michigan. “They learn how to sell the cookies safely and how to budget the profit as they decide on what activities to do in their troops.”

Brianna Keith, leader of Troop 486 in Michigan City, comprising Juniors through Cadettes (grades 4-12), agreed: “It builds a lot of confidence. We teach them that they will get a no from 100 percent of the people they don’t ask and that every person missed is a missed opportunity. It teaches them good money skills. The girls are involved throughout the entire process.”

The volunteer-ran rally also gave the girls a chance to complete requirements for a new Cookie Entrepreneur Family Pin. Various stations set up in the gym taught them how to count back change, act out the scenario of door-to-door sales, and test their knowledge of the types of cookies they’re selling.

“The pin involves the girls’ families more in the cookie-selling process and expands on what they learned before,” Keith said.

In addition to the pin, girls who sell a minimum of 36 boxes of cookies receive their first incentive patch. This year’s national Girl Scout cookie theme is “Chase Your Adventures,” with foxes named Fiona and Frances as mascots.

Girls were encouraged to set a cookie-selling goal and create an action plan to achieve that goal. Lillian Baker, a fourth-grade Junior Scout with Troop 214 at Coolspring Elementary School, has a goal of 800 boxes this year.

She said she “wants to go door-to-door for the first time to reach her goal.”

Her mother, Janet Drews, leader of Ordiway’s troop, said the Cookie Rally “helps the girls learn safe practices for selling; better understand the purpose for selling cookies and the importance of goal-setting and making a plan to achieve goals; and to develop entrepreneurial skills.”

It was also an opportunity for Officer Kay Pliske of the Michigan City Police Department to discuss Safe Seller Tips, which are outlined on their selling forms.

The highlights of the discussion were “never go alone, go during daylight and never go in anyone’s home,” Pliske explained. Other important tips included wearing uniforms, staying on sidewalks out of the roadway, and making sure to hand over money to adults.

“Don’t answer personal questions,” and “Don’t go in someone’s house,” were some of Maddy’s replies.

Pliske said there’s again an emphasis this year on the girls refraining from disclosing any personal information as they sell. She said it’s easy to get caught up in easy conversation starters, such as where a troop meets or what school a girl attends, but the Girl Scouts should re-direct questions such as these to the adults they’re with.

Troops from other cities in the Northern Indiana Michiana council may be selling in Michigan City as well. The council, with nearly 10,000 girls, spans 22 counties, 20 of which are in the northern third of Indiana and two counties in Southwest Michigan. While La Porte and Westville are also in the council, Chesterton is in the Girl Scouts of Greater Chicago and Northwest Indiana council.

Keith said some of the proceeds from local cookie sales go to support the upkeep and operation of four council camps, including Camp Soni Springs in Three Oaks, Michigan, where many local Girl Scouts attend day camp each summer. Monies raised also pay for programs for girls run by the council, training programs for adults, and badges, patches and events/activities the girls take part in with their troops.

In addition, cookie money gives troops a way to give back to their community.

Keith mentioned how her troop made care bags for foster kids. Packed in reusable bags, they included needed items such as socks and underwear, coloring books and crayons for younger children, and journals and pens for older kids. Another troop created a community beach toy box at Washington Park as a junior Bronze Award project.

Only two bakeries produce Girl Scout Cookies: ABC Bakery, part of Interbake Foods; and Little Brownie Bakery, a Keebler bakery. This is why there are sometimes two names for the same cookie and different areas of the country may not sell the same cookies.

Girl Scouts of Northern Indiana Michiana get their cookies from ABC Bakery. For more information, go to: girlscoutsnorthernindiana-michiana.org or girlscoutcookies.org.