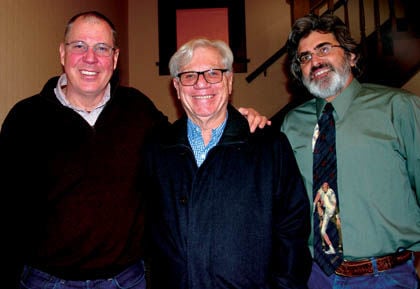 Former Major Leaguers Dave Gumpert and Dave Machemer (from left) told stories about their baseball careers and answered questions from Garry Lange and members of the audience. - photo by John Gunner Gooch 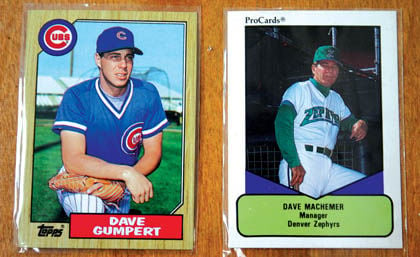 Former Major Leaguers Dave Gumpert and Dave Machemer (from left) told stories about their baseball careers and answered questions from Garry Lange and members of the audience. - photo by John Gunner Gooch

THREE OAKS – Baseball fans In Harbor Country enjoyed the opportunity to meet and listen to stories by former Major League players Dave Gumpert and Dave Machemer during a March 7 event hosted by Garry Lange at The Biggest Little Museum.

Lange introduced the pair of Michiganders who, through talent, hard work and perseverance, made it to the pinnacle of our national pastime.

Lange said that Machemer, currently a scout for the Baltimore Orioles organization, had a very full career in baseball that included playing in the minor leagues for 11 years before being called up to play in the majors for the Angels. He played in the majors for parts of two seasons before putting his baseball acumen to good use as a highly regarded minor league manager for 23 years.

By the way, he was the one who signed River Valley High School standout Jeff Peterek (who reached the majors with the Milwaukee Brewers) to a professional contract.

Gumpert continued his baseball career after high school by attending Aquinas College in Grand Rapids and playing lots of summer league ball. He made his Major League debut with the Tigers during the summer of 1982, and the following season he was named the Rookie of the Year for the Detroit organization. After the Tigers he went on to pitch for the Chicago Cubs and the Kansas City Royals during a five-year career.

At the conclusion of his baseball career he returned to the area where he became the athletic director at his alma mater, South Haven High School. There he remains active in the community and assists with the softball program. And yes, he keeps his talented arm busy by pitching batting practice.

Both athletes said that their love affair with the game of baseball that persists to this day began at a very early age.

“As a boy my father never said no to me when I asked him to go out in the backyard and play catch,” Machemer said. Growing up I played at all levels of baseball, including Little League in Benton Harbor. As it turned out, baseball became my life, and it all started by playing catch with my dad in the backyard.”

Gumpert said that the kids in his childhood neighborhood would organize their own baseball games.

“I had three brothers, but none of them were too interested in baseball,” Gumpert said. “I bought a rubber ball and would throw it against the side of our house – the side that didn’t have any windows so I wouldn’t break them,” he said with a smile. “I grew up a Tigers fan, and I still am, so I’d listen to their announcer Ernie Harwell broadcast their games, and I’d simulate them.”

Gumpert said he had a growth spurt while in college, and playing baseball in Grand Rapids in the summer helped him get discovered and get signed to a contract.

Machemer said that he got recruited out of high school and decided to play ball at Central Michigan because the coach there showed an interest in him both as an athlete and a person.

“I started out playing shortstop, but eventually I was moved to the outfield,” Machemer said. “I had a pretty good year as a junior, and I played summer ball in Battle Creek. I ended up being drafted by the Angels in the fourth round of the 1972 free agent draft.”

That began his long journey through minor league baseball, but batting .407 late in that quest finally got him noticed by the Major League club.

“I was recovering from a knee injury when I was called up, and I told them it was about 85 percent back to normal but I was good to go on it,” Machemer recalled. “The Angels were playing the Red Sox, so I flew into Boston but that game ended up being rained out, so I got some more rest.

“When we got back to Anaheim my knee was feeling even better. We were playing the Twins, and I was told that I’d be playing, but I couldn’t believe it when I saw the lineup card and my name was written in as the leadoff hitter,” he continued. “On that first at bat I worked the count to 3-2, then I fouled off three or four breaking balls, and then I figured the pitcher would try to bust one in on me. He did and I hit it good and right down the third base line. It ended up going into the stands for a home run, and I was so excited that I missed touching first base. The coach called me to come back and touch the bag, and I did and then circled the rest of the bases. The first person to pick me up and hug me as I returned to our dugout was (Hall of Fame pitcher) Nolan Ryan.”

That very first at bat home run put Machemer in rare Major League company. It also turned out to be his only home run in the majors.

Gumpert said he spent two years in the minors before being called up to Detroit, and during that time he transformed from being a starting pitcher to a reliever.

“My first game in Detroit I was called in from the bullpen and threw one pitch the batter hit into a double play. We hit a home run in the bottom of the ninth inning, so I picked up the win,” Gumpert related.

“My second game in Detroit (manager) Sparky Anderson called me in again from the bullpen in the ninth inning, and I got Buddy Bell to hit into a double play to end the game.

“By making it all the way to the Major Leagues I got to experience something that most kids dream about doing,” he added.

At the end of their talks Gumpert and Machemer answered questions from Lange and members of the audience.

Both said they liked the use of instant replay that attempts to make sure plays get called correctly, but they also said they would draw the line at using computerized strike zones in lieu of umpires calling balls and strikes.

“I wouldn’t want to lose that human element in the game, plus their calls give us all something to talk about the next day,” Gumpert commented.

Both professed to being proponents of “small ball” rather than a game dominated by sluggers who may hit many home runs but also collect a significant amount of strikeouts.

“I stole over 40 bases in the minors four times, but you don’t see that many stolen bases anymore, but that time may come around again,” Machemer said.

Both said they saw some positives for the use of analytics in today’s game, but they said there was much more to judging a player.

“Analytics or a radar gun can’t measure the size of someone’s heart,” Gumpert said. “A crafty pitcher like Greg Maddux probably never threw a pitch that reached 90 mph, but he had great control and location, and he’s in the Hall of Fame. Today he may not have gotten a second look because they are seeking pitchers who can throw the ball with greater velocity than he had.”

Both also gave the nod for letting all-time hits leader Pete Rose into the Hall of Fame.

“The Bird was pitching in a Triple A game and I was playing third base and made a pretty nice play and was able to throw the batter out, and he came sprinting over and chest-bumped me and nearly knocked me over, but that was just the way he was,” Machemer recalled. “He was a special guy and a very good friend. I loved him.”

Gumpert concurred, saying that Fidrych was truly one of the good guys in the game.

“He was never looking for a big 10-year contract or anything like that,” he said. “He truly just loved to play baseball.”

The love of the game is what The Biggest Little Baseball Museum (located on the second floor of the Three Oaks Township Public Library) is all about. It’s a place where fans can mingle and linger and share baseball tales and talk.

And it’s a place where those pictures on the front of the baseball cards sometimes come alive.