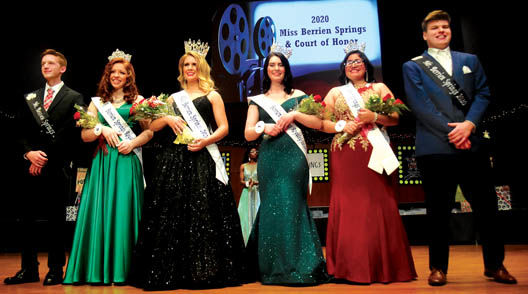 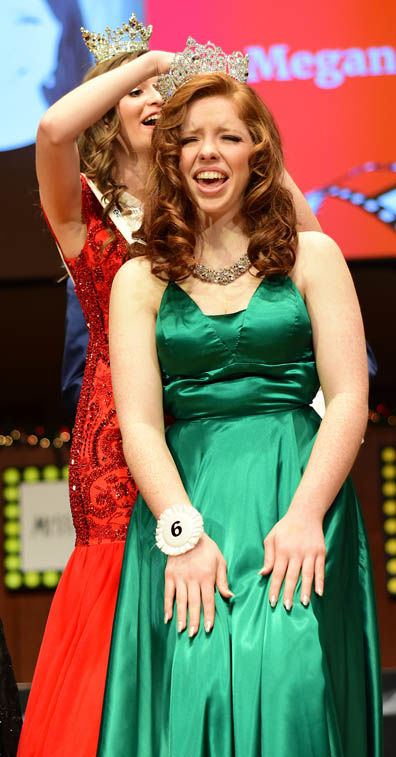 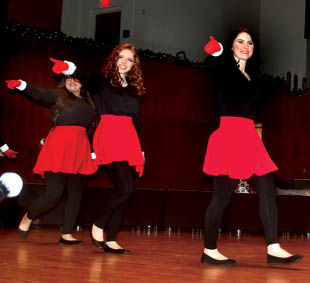 Lily Haskins (right) and Megan Klein participate in the “All I Want for Christmas is You” dance number that opened the Dec. 14 Miss Berrien Springs Scholarship Pageant. 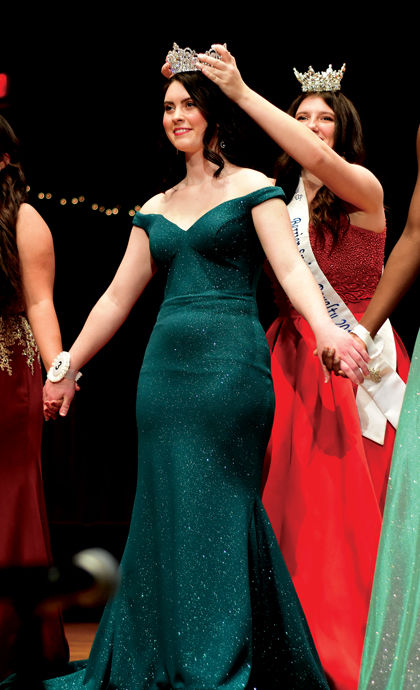 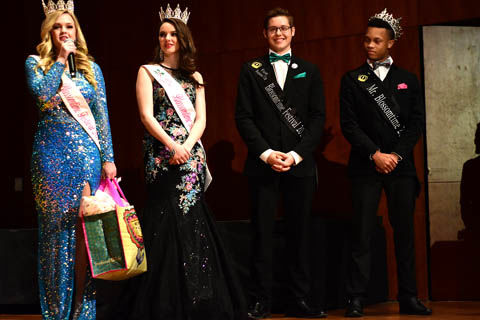 Lily Haskins (right) and Megan Klein participate in the “All I Want for Christmas is You” dance number that opened the Dec. 14 Miss Berrien Springs Scholarship Pageant.

BERRIEN SPRINGS — Faith Kittleson made history earlier this fall as the kicker on the Berrien Springs varsity football team.

Now, she is Miss Berrien Springs 2020 after being crowned Saturday night, Dec. 14, before about 400 people in the Howard Performing Arts Center at Andrews University in Berrien Springs.

Faith, 17, was chosen from a field of seven contestants and will now compete with other community queens for the Miss Blossomtime title March 1516 at Lake Michigan College’s Mendel Center.

The new queen is a senior at Berrien Springs High School and is the daughter of Eden Partlo and Cary Kittleson. She wore a black ball gown with a sweetheart neckline and rhinestone and glitter embellishments.

Kittleson plans to attend Western Michigan University to major in psychology and minor in business. She hopes to study abroad during her junior year and eventually to open her own business.

Her school activities include soccer and football. She is the girls soccer team captain, player of the year and record holder for goals scored and assists made. She has been the place kicker for the varsity football team this fall and set a state record for nine consecutive points after touchdowns made in one game.

In addition, Faith was the homecoming queen this fall, been on the honor roll all four years, plays with the Southwest Michigan Youth Orchestra and does ballet. She has volunteered with the Granger food drive, Granger soup kitchen, girls soccer camp, fire department pancake breakfast and Salvation Army.

Megan, 17, a senior at Bridgman High School, is the daughter of Glen and Amy Klein. She is in the Early Middle College Program at Lake Michigan College and plans to transfer to Western Michigan University after graduation. She hopes to earn a degree in biomedical science and pursue a career in the medical field. Her school activities include honor roll, cheerl eading, choir and theater. She is a National Merit Scholarship Award nominee and has volunteered with the Bridgman STEM Lab fundraiser and the Mini Bees cheer camp.

Lily, 17, is the daughter of Erik and Keri Haskins and a senior at Bridgman High School. She plans to attend the University of Michigan to study linguistics with the goal of becoming a speech pathologist.

Dulce, 18, is a Berrien Springs High School senior and the daughter Pedro and Maria Lopez. She plans to attend Lake Michigan College and then Eastern Michigan University to get a degree in elementary education.

Other contestants were Zoe Dortch, Ellie Haygood and Eboni Willis.

Dylan, a Berrien Springs High School senior, is the son of Sabrina Pesce and Chuck Mondschein. He plans to attend the University of Michigan. His school activities include National Honor Society, hockey and track.

Skylar is the son of Jacob and Lori Sawle and a senior at Berrien Springs High School. He plans to attend Western Michigan to get a degree in electrical engineering. His school activities include honor roll, football, track and field and wrestling.

Delanie-Jude Dutoi and Piper Perez were named the Little Miss Berrien Springs for 2020.

The judges were Sharon Gregorski, Beth Beaudette and Stephannie Vandenberg.