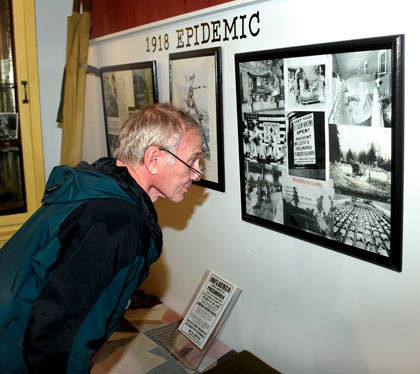 Tony Sherer of Lakeside gets an up-close look at the new 1918 Spanish Flu exhibit at the Region of Three Oaks Museum during the May 3 reception that kicked off the 2019 season. - photo by David Johnson 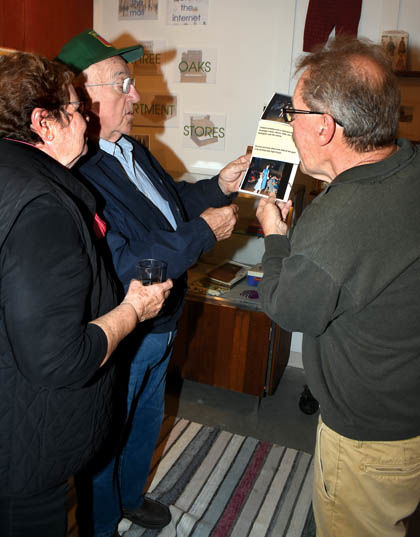 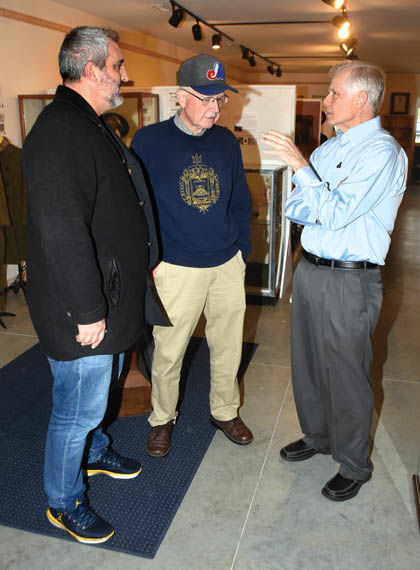 T.D. Butzbaugh, Jim Jeschke and Nick Bogert (from left) socilaize during the May 3 reception at the Region of Three Oaks Museum. 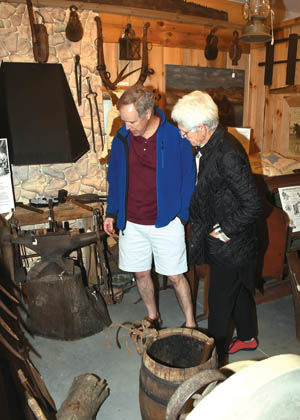 Michael Ruddick and Joanne Sims check out the Ag Room at the Region of Three Oaks Museum on May 3. 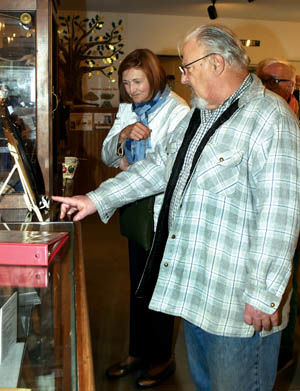 Randy Miller (right) and Marian Cioe look at a Civil War display at the Museum. 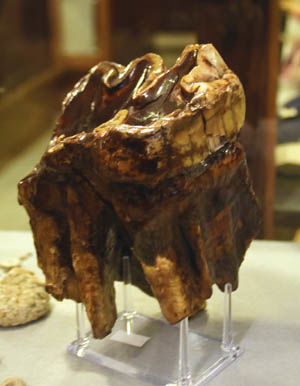 Tony Sherer of Lakeside gets an up-close look at the new 1918 Spanish Flu exhibit at the Region of Three Oaks Museum during the May 3 reception that kicked off the 2019 season. - photo by David Johnson

T.D. Butzbaugh, Jim Jeschke and Nick Bogert (from left) socilaize during the May 3 reception at the Region of Three Oaks Museum.

Michael Ruddick and Joanne Sims check out the Ag Room at the Region of Three Oaks Museum on May 3.

Randy Miller (right) and Marian Cioe look at a Civil War display at the Museum.

THREE OAKS — Hunerjagers’ Department Store was a big deal in downtown Three Oaks for much of the 20th Century.

A look back at the store’s glory days and much more are offered at the Region of Three Oaks Museum at 5 Featherbone Ave. in Three Oaks, which opened the 2019 season on Friday, May 3, with a preview wine reception.

The Museum is open through October every Friday through Sunday from noon to 5 p.m.

Previously known as the C.K. Warren and then Three Oaks department store before being purchased in 1934 by John Hunerjager who ran it with his wife Clara and later their children John, Mary Ann and Bob, Hunerjager’s was a landmark and a part of life in Three Oaks until the mid-1980s.

“That department store was wonderful, they had everything,” recalled Dee Jelinek. “Bob Hunerjager was a violinist with the St. Joe Symphony, so you often would hear him practicing in the back. His wife Charlotte was an organist and a piano player so sometime you would hear her.”

She said there was jewelry, a shoe department, fabrics — a little bit of everything.

“At Christmas they had a great, big Christmas tree and they had Santa Claus come in,” said her husband (and Museum Board Member) Ron Jelinek.

The Jelineks reviewed photos from a Hunerjager’s fashion show (held regularly by Charlotte in the high school gym) with Chuck Sittig during the reception.

“I was in one of her fashion shows when I was in high school,” Dee said. “It was at the Chikaming Country Club then.”

Chuck Sittig, President of the non-profit’s Board of Directors, said the museum has a new website (www.regionofthreeoaksmuseum.com), has new signs out front above the entrance and next to the parking lot, and is getting new landscaping thanks to the River Valley Garden Club.

It is surrounded by parking spaces shared with the Acorn Theater, Journeyman Distillery/Staymaker Restaurant and other downtown attractions.

Sittig said the Museum operates on about $7,000 per year and is  run and overseen by an all-volunteer group.

Museum Curator (and head of its Collections Committee) Judy Jackson talked about what’s new for 2019 including: three donated stoves for the kitchen display, noting that the timer on a Tappan range from the 1940/50s still works; the Warren/Hunnerjager Department Store section which includes a chance to guess what items cost back in the day; the Ag Room with an oil painting depicting E. K. Warren’s son at a cattle ranch in the American Southwest from Michigan State University (which has many artifacts from the old Warren Chamberlain Museum, which closed in 1952); and a new exhibit on the 1918 Spanish Flu Epidemic.

“Three Oaks lost more citizens from that flu than any other town or village or city in Berrien County. We got hit very, very hard,” Jackson said. “One reason why the flu spread so rampantly was because of World War I. Many of our Three Oaks soldiers … went to (Fort Custer) in Battle Creek and then they would come home to visit for the weekend or on furlough. Well, they didn’t just come to visit, they came home to bring the Spanish Flu.”

She said the music room and the bedroom, both loaded with local history, are basically unchanged.

Chuck Sittig noted that twin beds and other items from the Vine Cottage in Lakeside (E.K. Warren’s summer residence) should be arriving by Mid-Summer.

Jackson urged visitors to utilize the free QR app on cell phones to watch videos and access more information on some of the displays.

She thanked Sue Harsch for helping with exhibits and Nick Bogert for all of his hard work.

“He totally redid this whole area up front with Three Oaks history (including the high school, the Feartherbone and E.K. Warren), and he redid the whole military area and did the exhibit on Mr. Flynn, Whittaker (Street) and Joe Savoldi,” she said.

John Flynn was a Chicago labor leader who became a leading citizen of Sawyer.

Bogert (another Museum Board member) has made videos about Jumpin’ Joe Savoldi, E.K. Warren, the Potawatomi Band and now the Making of “Prancer.”

“Lights, Camera, Three Oaks! The Making of Prancer” will make its debut at noon on July 20 at the Vickers Theatre in downtown Three Oaks.

Bogert said he interviewed “Prancer” director John Hancock and actress Rebecca Harrell (who was 9 when she portrayed Jessica Riggs) for the documentary on the 1989 movie filmed in and around Three Oaks.

“She’s made some environmental documentaries with her husband,” Bogert added.

Bogert said there was some talk that the then-vacant Featherbone factory building was offered to filmmakers “if they wanted to blow something up.”

As anyone who’s seen the Christmas movie knows, no explosions take place and today the sprawling old Featherbone complex is home to the Acorn Theater, Journeyman Distillery and its Staymaker Restaurant.

Bogert said he also interviewed local people who appear in the film including a woman who had to sing the same Christmas carol “over and over and over.”

“A number of the items in that display case (including a pair of wrestling shoes, a Joe Savoldi Drop Kick Root Beer bottle and a photo of Joe shaking hands with Ed “Strangler” Lewis) are new this year because of Jim and his siblings.”

He noted that Lewis convinced Joe to give up football and take up wrestling.

Bogert said a give-back dinner for the Museum is being planned for June at the soon-to-open Froehlich’s Bakery and Restaurant in downtown Three Oaks (the long-time site of Hunerjagers’ Department Store); the “Three Oaks Against the World” video will be screened at the Vickers Theatre downtown at noon on June 15; in August a Three Oaks trivia night is being planned; and a program on the history of area wine-making also is in the works.

Randy Miller, a Museum Board member and volunteer, pointed out highlights of the Civil War displays including a cartridge case that had belonged to 12th Michigan Infantry member Oliver Brockway of Three Oaks (a close personal friend of village founder Henry Chamberlain).

Brockway lived until 1919 and is buried in Forest Lawn Cemetery.

“His name is actually engraved in the leather.”

Miller said Thomas Bradley, who had a farm on Elm Valley and Kruger roads, enlisted at the age of 41 and became the highest ranked soldier from this area.

“He got wounded in the neck at the Battle of Shiloh and then he came back home and resumed his farming career,” he said.

Bradley also is buried in Forest Lawn Cemetery, and Miller said a tour of Civil War veteran graves at that site will be part of the Three Oaks Civil War Days scheduled for July 27 and 28 (and co-sponsored by the museum).

Sorry, there are no recent results for popular articles.