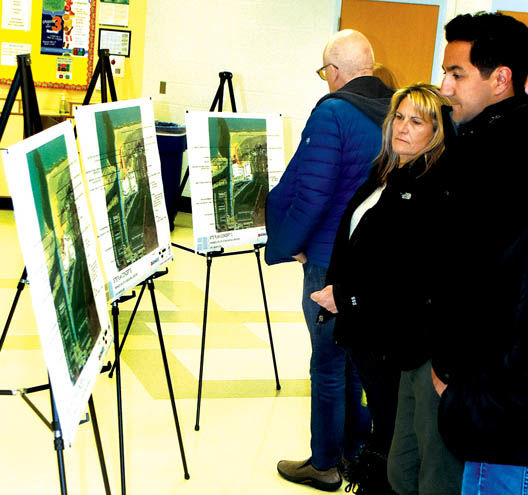 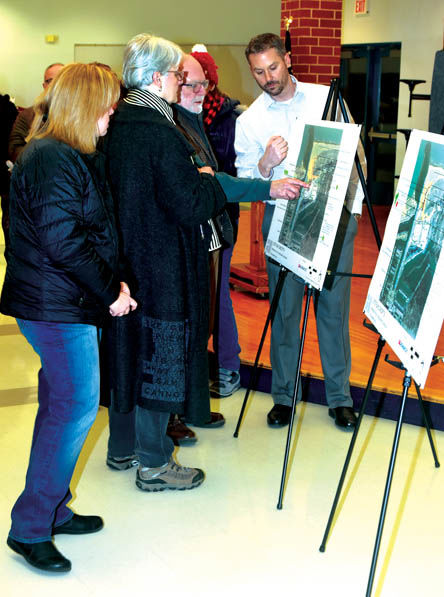 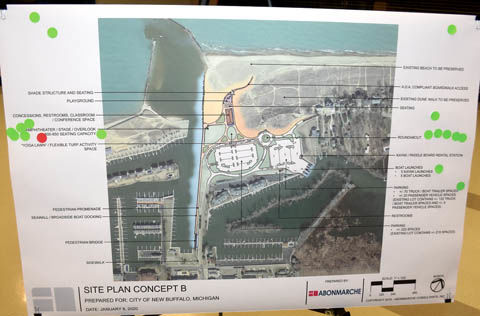 The site plan map of “Concept B” — one of three reviewed and critiqued by members of the public on Jan. 8. 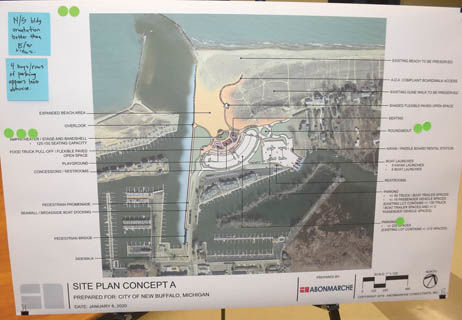 The site plan map of “Concept A” — one of three reviewed and critiqued by members of the public on Jan. 8. 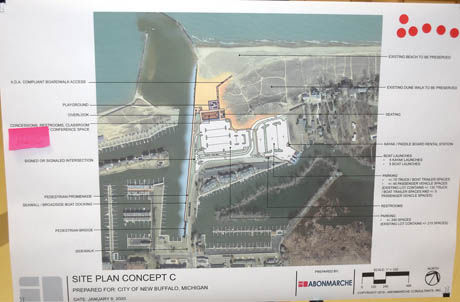 The site plan map of “Concept C” — one of three reviewed and critiqued by members of the public on Jan. 8. 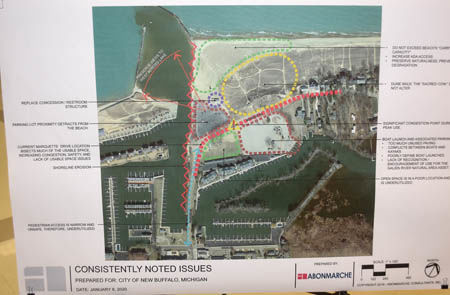 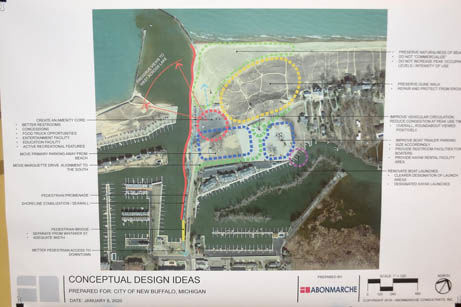 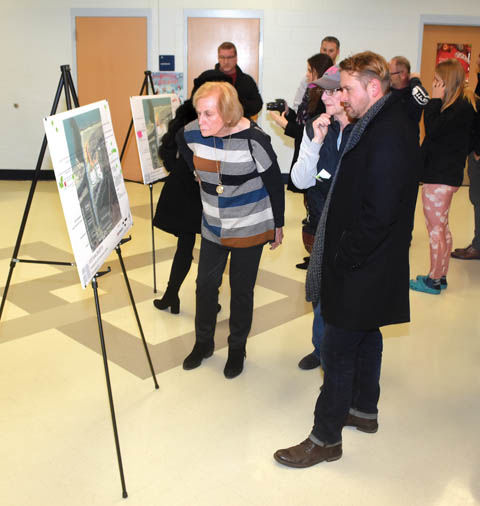 The site plan map of “Concept B” — one of three reviewed and critiqued by members of the public on Jan. 8.

The site plan map of “Concept A” — one of three reviewed and critiqued by members of the public on Jan. 8.

The site plan map of “Concept C” — one of three reviewed and critiqued by members of the public on Jan. 8.

NEW BUFFALO — Three proposals for a redesigned public waterfront area in New Buffalo were reviewed and critiqued by members of the public on Jan. 8 in the New Buffalo High School cafeteria.

It was the second “Design Charette” session stemming from the City of New Buffalo receiving a $50,000 grant from USDA Rural Development to fund a Waterfront Master Plan study.

A well-attended Dec. 5 Waterfront Master Plan Design Charette session took place at City Hall. Results of an online survey on the public beach and other waterfront amenities in New Buffalo that received responses from 654 people was reviewed on Dec. 5 before the public was given a chance to start working toward the future.

“We did two primary exercises at the first session,” said Abonmarche Planner Mike Huber. “We asked them to identify the critical issues in how the beach park operates right now … The second exercise we had was to design the beach as they wanted.”

A “Consistently Noted Issues” map of the current waterfront on display Jan. 8 listed issues and improvement ideas such as: Replace the concession/rest room structure; parking lot proximity detracts from the beach; the current location of Marquette Drive bisects much of the usable space and increases congestion; erosion issues along the Galien River were noted; pedestrian access along the river and over the Whittaker Street Bridge is narrow, unsafe and therefore underutilized; do not exceed the beach’s carrying capacity, increase ADA access to the beach; do not alter the Dune Walk overlooking the beach; Too much unused paving and conflicts between boats and kayaks at the boat launch facility; Encourage the use of the Galien River as a natural asset.

“We’ve created three different design concepts with varying levels of intensity of use … trying to address the key issues that were identified,” Huber said, adding that the designs are based on what members of public participating in the Dec. 5 session liked and wanted to see at the beach.

All three site plan designs keep the existing beach and Dune Walk areas pretty much as they are now, and all include a playground and some sort of an ADA-compliant boardwalk to help visitors reach the beach.

They also call for a seawall along the Galien River from the Whittaker Street Bridge to an overlook area at the beach that includes a pedestrian promenade, a foot-traffic bridge alongside the existing span, and broadside boat docking. A combo kayak and boat launch access facility across Marquette Drive from the beach (five each) is part of all three concepts as well.

Concept A (considered the medium use plan) features an ampitheater/band shell with seating for 125 to 150 people; a centrally located concessions/rest rooms building; a redesigned parking area accommodating about 220 vehicles (the current lot has 215 spaces); a food truck/flexible paved open space on one side of the concession building and a seating area on the other; and a shaded paved open space along the ADA-compliant boardwalk to the beach.

Concept B (highest-level of use) is similar to A, but expands the ampitheater/band shell facility’s capacity to at least 800 people; adds a conference space to the concessions/rest rooms building and moves it farther out on the beach with the longer side parallel to the river; and includes a yoga lawn/flexible turf activity space.

Concept C (lowest-level of use) is a simpler layout with an expanded parking lot (240 spaces at the beach), no ampitheater/stage area, and a centrally located concession, rest room and classroom/conference room building (called out for blocking views of the lake in an attached note).

While vehicular traffic is redirected through the current Lions Pavilion Park in all three plans (with park amenities and open areas moved closer to the lakefront), the A and B maps also add a roundabout at the point where traffic can go into the public beach lot, continue along Marquette Drive or return to Whittaker Street in the direction of downtown.

The concepts were rated on Jan. 8 using green (indicating a positive response) and red (for negative feedback) stickers. Sticky notes were used to make comments by those participating in the Design Charette.

A and B got quite a few green stickers (with the high-use Concept B getting the most), while C was mostly in the red.

Tom Runkle of Abonmarche said he was hearing mostly positive feedback on the roundabout idea during the Jan. 8 session.

“We’re trying to separate the parking from the through traffic throughout the areas,” he said.

Runkle said he also was hearing that people prefer the siting and orientation of structures at the beach in a way that preserves views of the lake as much as possible.

“We’ve heard positive concepts about an amphitheater or gathering space. We’re getting various opinions, though, on the size of that,” Runkle noted.

“I like that the city is taking steps to improve the lakefront,” said Tom Holland, who participated in the Jan. 8 Design Charette. “I hope they can come together and build something great.”

Huber said the two design sessions built around public input are an attempt to give the public a beach it will be proud of.

“We don’t want to come in and impose something on people and have them not like it. Building it off of what the public says they want to see will hopefully bring ownership,” Huber said.

Huber said information and feedback gathered at the Jan. 8 Design Charette will be communicated to the waterfront project’s Steering Committee and city officials “to coalesce all of this information into the vision that best fits the city’s vision for the waterfront plan.”

He said financing various aspects such as the pricey seawall/pedestrian bridge/public promenade/boat docking facility, will be an ongoing challenge.

“We’ll do some preliminary cost estimates … so they can start planning and budgeting and looking for grants and other revenue sources,” he said, adding “there are some pretty big-ticket items in here.”

Huber said the improvements to the Dune Walk that a recently approved grant had made possible also will be incorporated into the plan (see article in the News section of this website).