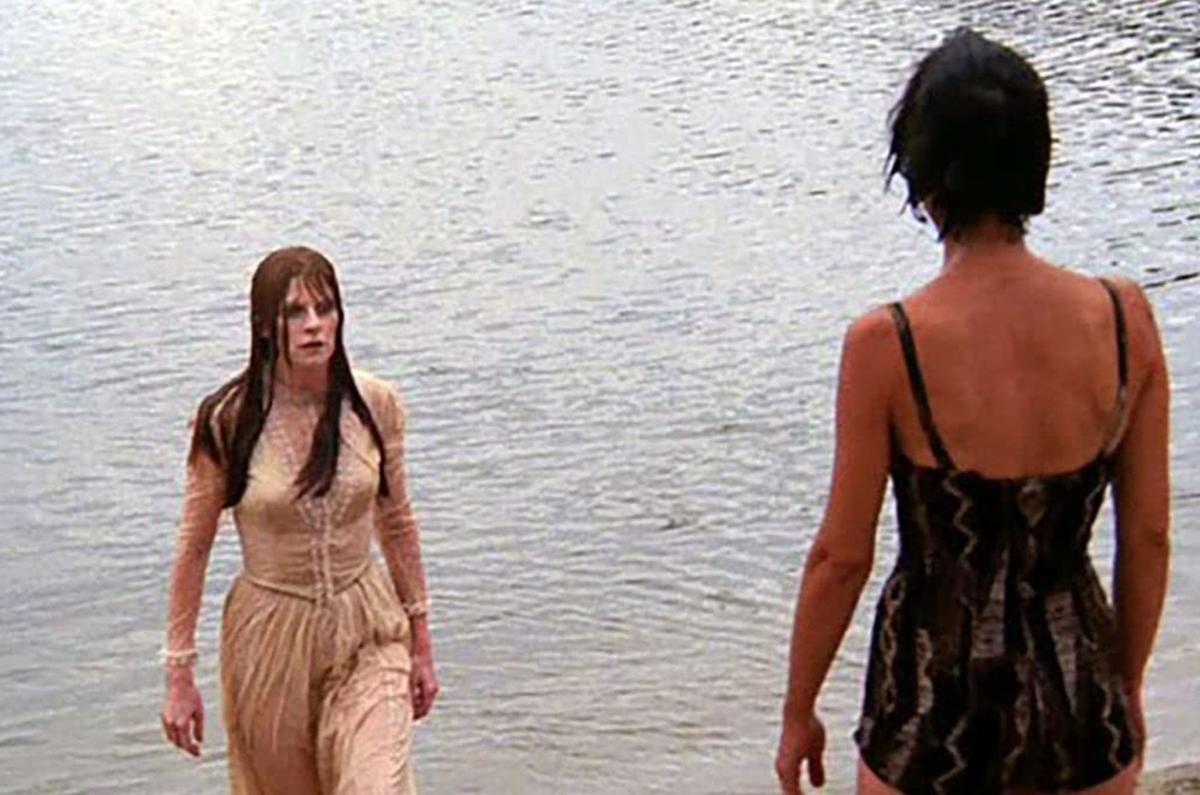 Emily (Mariclare Costello) rises from the depths in a wedding dress – the spitting image of the girl who drowned there before her wedding day 100 years ago – to confront Jessica (Zohra Lampert) in a scene from “Let’s Scare Jessica to Death.” 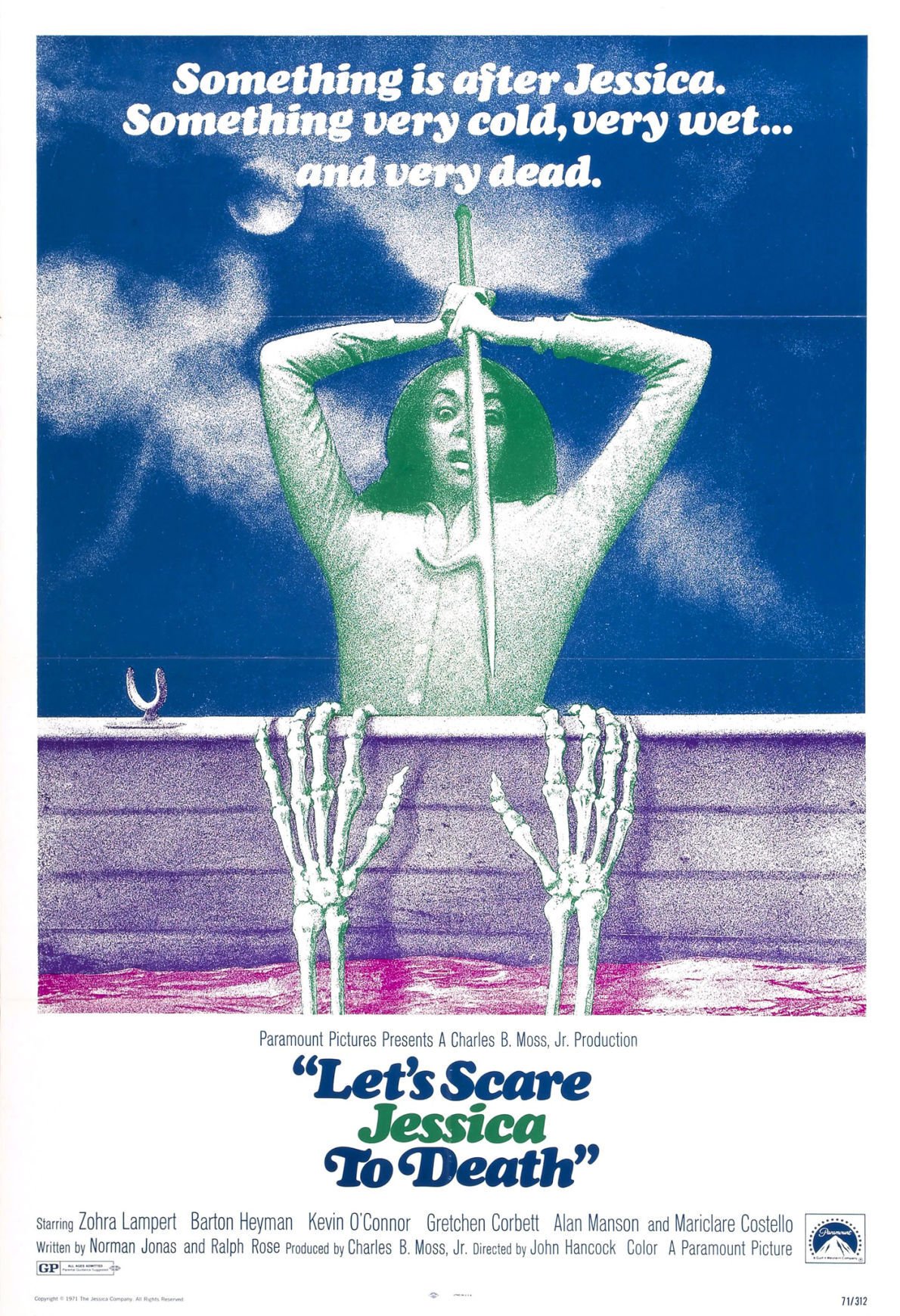 Director John Hancock complimented Paramount Pictures for the “wonderful” campaign and poster it provided for “Let’s Scare Jessica to Death” upon its release in 1971. 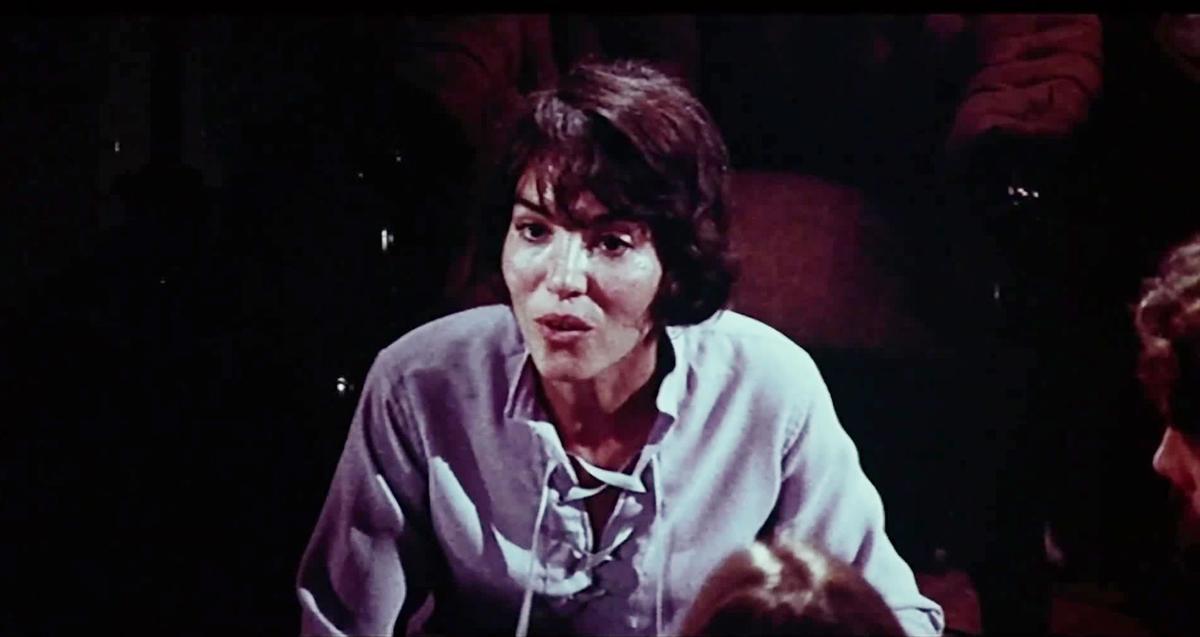 Jessica (Zhora Lampert) participates in a seance. “I thought Zhora was wonderful in the picture, and she really is why the picture I think really works,” Director John Hancock said. “You have to be able to do a good scream, and she’s a good screamer.”

Director John Hancock kneels in front of his La Porte, Ind., home, where he lives with his wife, Dorothy Tristan. He moved to La Porte full time in 1995, after his house burned down in Malibu. “Four hundred houses were destroyed in a big wildfire,” he said. “It looked like a moon, the mountain just black, everything burnt.”

Emily (Mariclare Costello) rises from the depths in a wedding dress – the spitting image of the girl who drowned there before her wedding day 100 years ago – to confront Jessica (Zohra Lampert) in a scene from “Let’s Scare Jessica to Death.”

Director John Hancock complimented Paramount Pictures for the “wonderful” campaign and poster it provided for “Let’s Scare Jessica to Death” upon its release in 1971.

Jessica (Zhora Lampert) participates in a seance. “I thought Zhora was wonderful in the picture, and she really is why the picture I think really works,” Director John Hancock said. “You have to be able to do a good scream, and she’s a good screamer.”

La PORTE, Ind. — In an early scene from “Let’s Scare Jessica to Death,” the heroine (played by Zohra Lampert) follows her husband and friend into what appears to be an empty home on a rural Connecticut fruit farm.

Prior to entering, she spots a stranger on the rocking chair out front, who disappears when she approaches. Earlier it was revealed she’d been institutionalized for an unnamed illness, and moved here in an attempt to start over.

As she walks inside, she freezes. Her husband looks at her, then at the staircase in front of them. A human-like figure straddles the landing, then rushes off. Jessica remains frozen. Her husband calmly tells her he saw it, too, as if she can’t trust anything she sees.

It’s at this point that Jessica’s mental instability becomes apparent. And everything that follows – whether evidence of a century-old revenant, her husband’s infidelity, or suspicions that townsfolk are vampires – is called into question.

For Oscar-nominated director John Hancock, this unreliable narrator is what makes the film – inspired in part by his experiences growing up on his family’s fruit farm in La Porte, Ind. – so effective.

Since its release in 1971, “Jessica” has garnered praise from the likes of Stephen King and Rod Serling, and made the top horror film lists of the Chicago Film Critics Association and Times Out. Shout Factory released an extras-packed Blu-ray of the film in 2020.

An Oct. 23 screening of the film at the Vickers Theatre in Three Oaks was part of a series of “Late Night Frights” shows which continues through Halloween weekend. All showings are one time. Admission is $7.

Saturday October 30th at 9 p.m. – Celebrate this Halloween Eve with a special screening of “A Nightmare on Elm Street,” the 1984 Horror/Mystery Wes Craven classic.

In light of the 50th anniversary of “Let’s Scare Jessica to Death,” Hancock, now a full-time La Porte resident, spoke about the film’s inspirations and how he views the cult classic today.

According to Hancock, in one sense, the genesis of “Jessica” began when his family bought a fruit farm the year he was born. It was there he spent weekends and summers while living in the Chicago suburbs.

“I wasn’t conscious of it, but (while writing the screenplay) I was calling on memories of my father on a sprayer, the poisons and a spooky house,” he said.

When he attended school in Cicero, Ill., several classmates came from mobster families, the town being the base of Al Capone; but Hancock said he wasn’t frightened of them. His fears focused on other dangers, such as polio.

During summer camp in Michigan, his counselor and four campers died from the disease, and Hancock was quarantined for weeks. The alleged cause was “bug juice” – Kool-Aid served from galvanized garbage cans.

This helped lead to an anxiety about loneliness, death and the paranormal. The antagonist in “Jessica” is Emily (Mariclare Costello), who bears an uncanny resemblance to a woman who drowned in a nearby lake a century earlier. Jessica suspects Emily is a phantom or vampire, and finds herself isolated as everyone turns against her.

“I had a great uncle die (when I was young), and I was very frightened of his ghost,” Hancock said. “That somehow fed into ‘Jessica’ a little bit. And then when my mother’s father died, I was left alone in the house in Berwyn, and I got very paranoid.

“I stopped going to high school,” he said. “I was a freshman, and I just couldn’t leave my room for about four days. Everyone had gone down to his funeral ... so that fed into Jessica a little bit. Just ghosts, the spirits of dead people.”

Preparing for the production

In the 1960s, Hancock established himself as a stage director in New York City. Then he received a grant from the American Film Institute to produce a short film, which became “Sticky My Fingers ... Fleet My Feet,” based on a New Yorker short story about businessmen playing touch football in Central Park.

After its Academy Award nomination, it caught the attention of Catherine Wyler, daughter of director William Wyler, and head of development for producer Joe Levine. She recommended Hancock to father-and-son producers Charlie Moss Sr. and Jr., who owned a chain of theaters, including the Criterion Theatre in New York.

They were searching for someone to direct a script called “It Drinks Hippie Blood,” which Hancock described as a parody of a horror film. They offered him the job.

“And I said, ‘Well, I don’t want to make a parody, I’d like to make a genuinely scary movie. If you let me rewrite this, I’ll do it.’ And they did, and I rewrote it, and changed it 80 or 90 percent. ... I grew up on a fruit farm on weekends, so that’s the first thing I did was set it on a fruit farm, and that really got my juices going,” he said.

According to Hancock, the original concept involved four hippies – two couples – who move to the countryside and encounter vampires.

But Hancock had an issue with the group dynamic, knowing “things are scarier if you’re alone.” He cited the paranoia he felt as a young teen when his parents left him alone. So he reduced the couples to one, and introduced the idea of Jessica having recently left a mental institution, after seeing a similar concept in the Robert Wise film “The Haunting.”

Jessica is still with her husband, but their relationship is shaky when the movie begins, due to Jessica’s mental state.

“And there’s this seance where Jessica’s calling upon the spirits of anyone who’s ever died in the house,” Hancock said. “I used to think a lot about who had died in whatever house I was in, so we tried to draw things in that scared me.”

The film was shot around East Haddam, Conn., and the village of Essex, with interiors in the E.E. Dickinson Mansion, owned by the family of Dickinson’s Original Witch Hazel fame.

A sequence Hancock was particularly proud of involves the vampiric Emily attacking Jessica in the lake. Jessica flees to the house, locks herself in a room and pushes the dresser against the door, only to hear Emily’s disembodied voice saying, “I’m here, I’m still here.”

“That scared me to write it late at night,” Hancock said. “I was living in Sneden’s landing, an old Tory settlement about 40 minutes up the river from New York. It was kind of a scary place in itself. It was haunted a little bit. ... It was a Tory settlement, so they were not sympathizing with the [American] Revolution, so there’d been people getting clubbed, there was a lot of non-military violence ... A very beautiful area, though.”

Upon completion, the film was sold to Paramount Pictures, which changed the title from “Jessica” to “Let’s Scare Jessica to Death,” and released it in August 1971. It premiered at the Criterion Theatre.

“It was one of the most exciting screenings I’ve had with the opening night event because the audience never shut up,” he said. “‘Oh no. Don’t go in there! Oh God!’ ... they were very vocal, and it was thrilling. There would be a scare, and then they would be talking and you wouldn’t hear the dialogue for 10 seconds. It went extremely well.”

And its influence shot through the horror world.

In Stephen King’s 1981 nonfiction book “Danse Macabre,” he included “Let’s Scare Jessica to Death” in a list of some 100 horror films between 1950-80 that he felt “contributed something of value to the genre,” marking it as one of his favorites on that list.

More gratifying for Hancock were the accolades Rod Serling heaped on the film. Years after its release, Hancock learned “The Twilight Zone” creator advocated for the picture while speaking at universities in the early 1970s. Hancock would later go on to helm several episodes of “The Twilight Zone” revamp series in the 1980s.

“And comparing those scripts with the original Rod Serling series, what struck me is his seriousness, which is exactly what I was saying about myself in terms of actually engaging with a scary world,” Hancock said. “So to me, it’s extremely gratifying that he liked the picture because that’s the big approach that he had, that I tried to have to some extent.”

In addressing his film’s impact today, Hancock said making “Jessica” personal and serious tapped into something that engaged audiences.

“I think also the element … is it in her mind, or is it real?” he said. “The response to that has improved with time. It bothered certain critics [when released]. I think it’s one of the things people are liking better now.”

Catch it on the big screen

Vickers Theatre in Three Oaks will screen "Let's Scare Jessica to Death" at 6 p.m. Oct. 23. It will include a Q&A with Director John Hancock. It will be followed by "The Shining" (1980) at 9 p.m. For more information, or to purchase tickets, visit vickerstheatre.com.