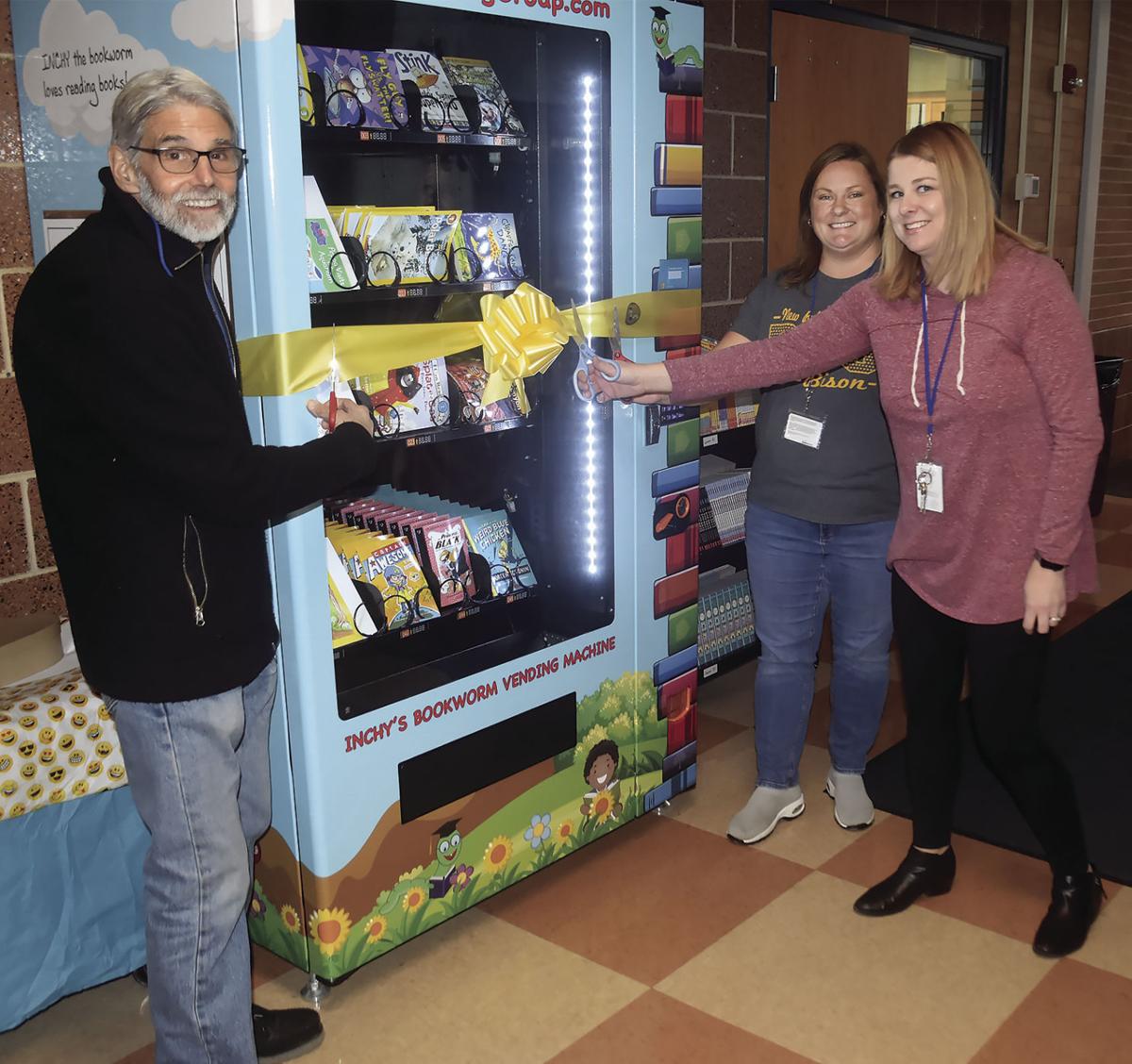 Ben Parker of the Rotary Club, Jean Haskins of the PTO and Title 1 instructor Melissa Lijewski prepare to cut the grand opening ribbon for the book vending machine at New Buffalo Elementary School. 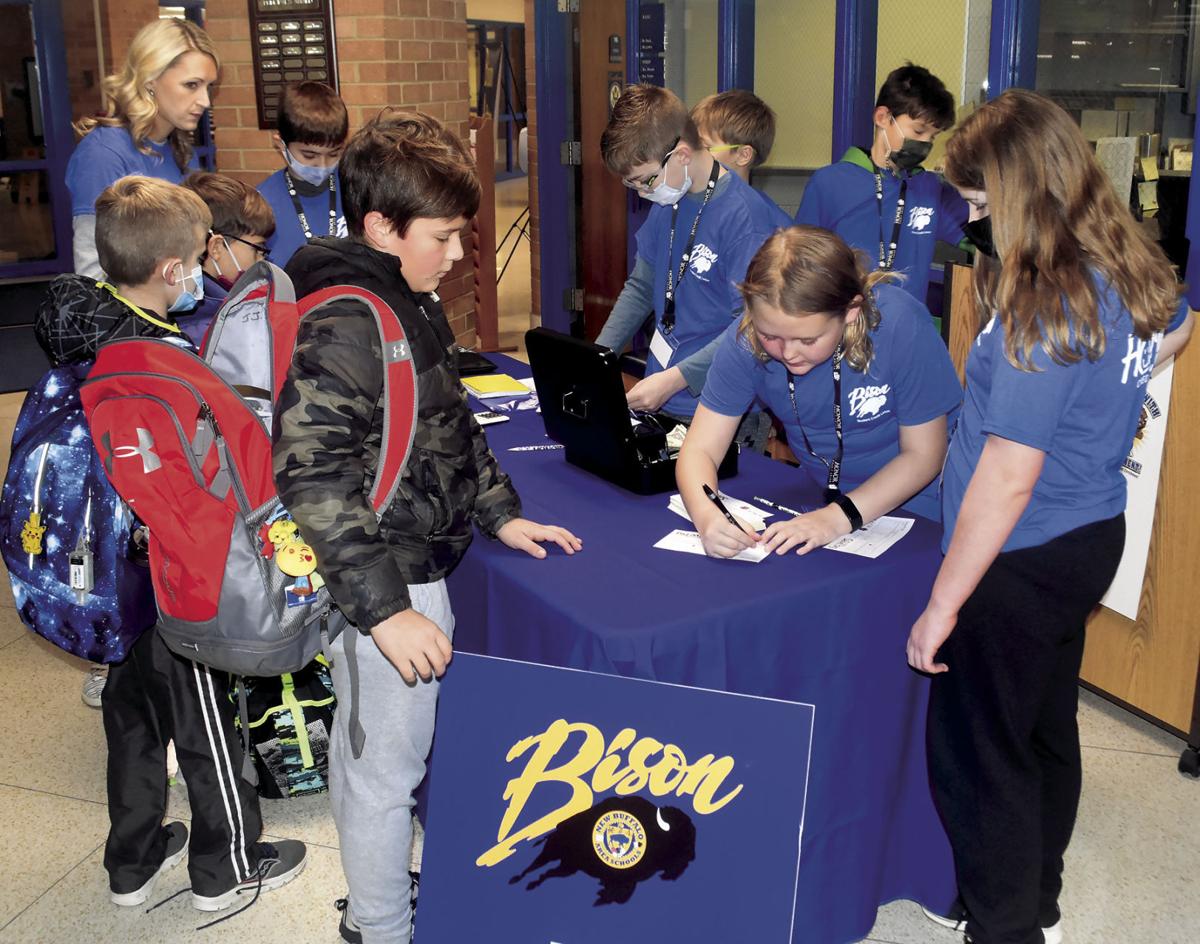 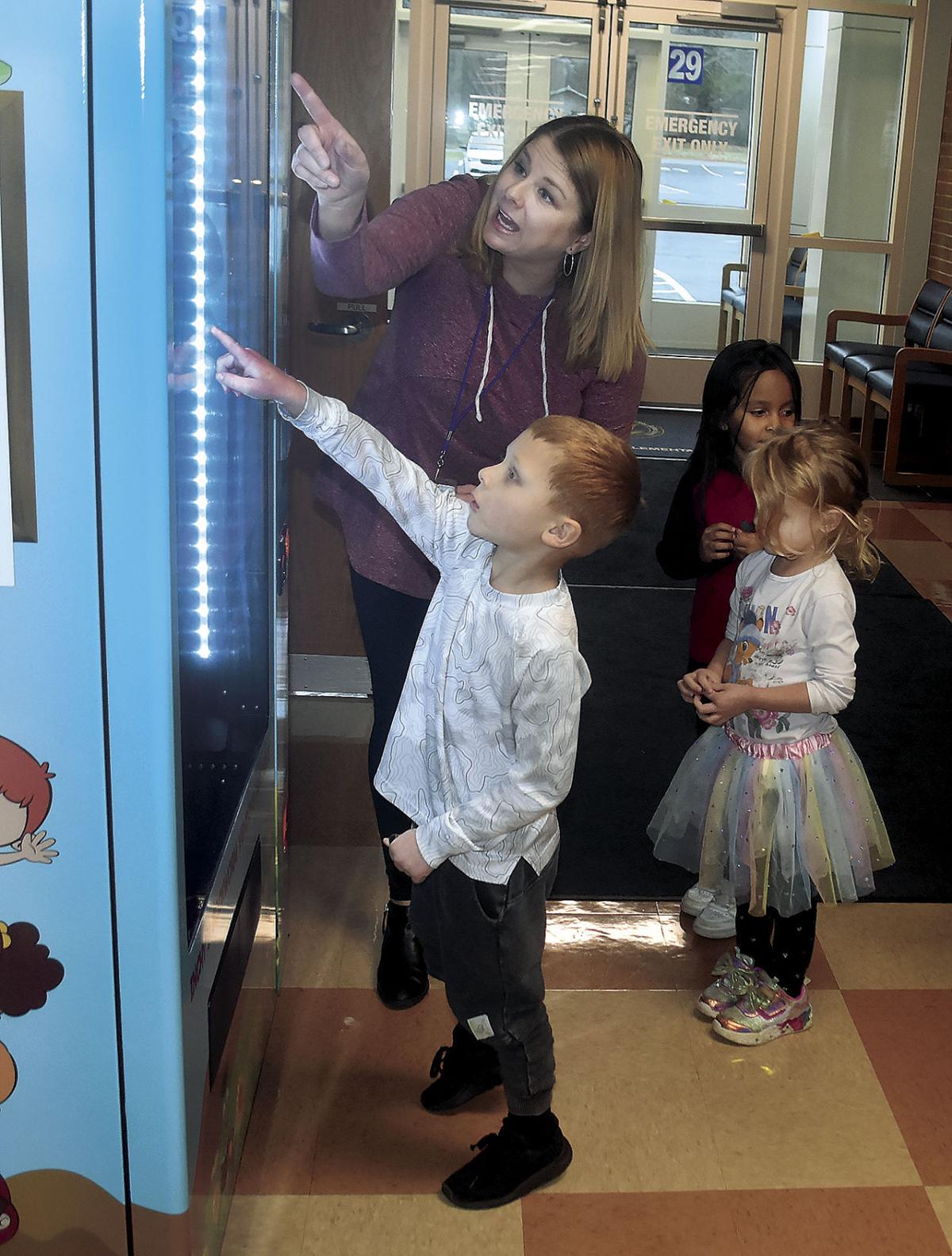 Preschooler Nash Grant points out the first book he wants from the new vending machine at New Buffalo Buffalo Elementary. 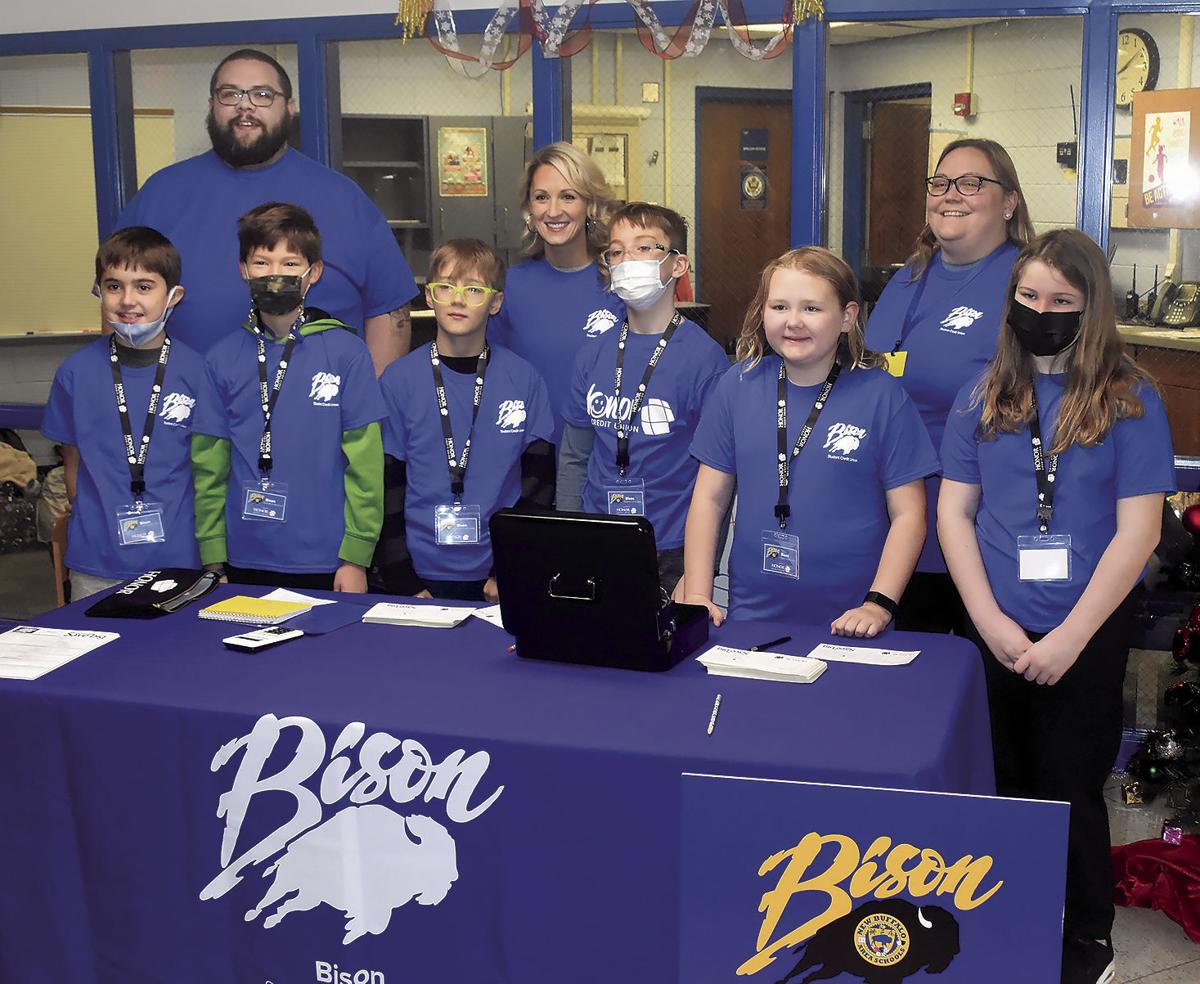 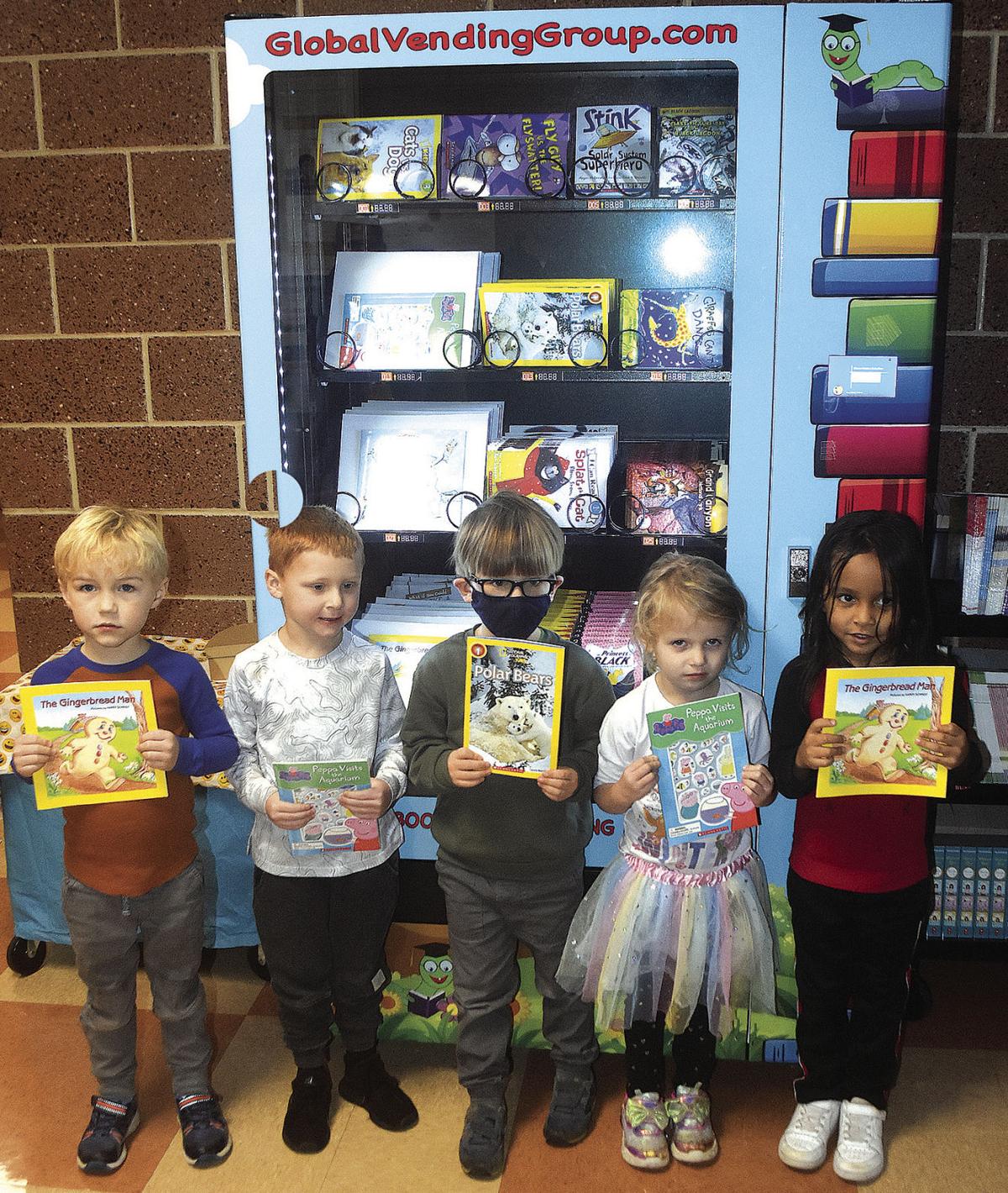 Cutting the ribbon for the Bison Credit Union.

Ben Parker of the Rotary Club, Jean Haskins of the PTO and Title 1 instructor Melissa Lijewski prepare to cut the grand opening ribbon for the book vending machine at New Buffalo Elementary School.

Preschooler Nash Grant points out the first book he wants from the new vending machine at New Buffalo Buffalo Elementary.

Cutting the ribbon for the Bison Credit Union.

A pair of recent ribbon-cuttings kicked off the Bison Kids Credit Union program and access to a pair of Bookworm book vending machines at the school.

The grand-opening ribbon for the book vending machines was cut on Dec. 6.

New Buffalo Elementary Principal Adam Bowen said it was about a year ago that members of the NBEL PTO and Harbor Country Rotary Club asked him about the possibility of installing book vending machines at the school. The two organizations eventually partnered with The Pokagon Fund to make the dream a reality.

“The day has finally come when we’re able to do this,” he said during a school-wide Zoom session, adding that students have seen the machines in the halls for the last two weeks while electrical hook-ups were being awaited.

“Everyone is going to have a chance sometime (next) week to get a free book,” he said.

Pupils get tokens that entitle them to one book from the vending machine, and the plan is for everyone to get at least five of them from now though the end of the school year.

Title 1 instructor Melissa Lijewski said they will get one for the grand opening, one to get a book ahead of Winter Break (which begins following classes on Dec. 17), one for their birthday, a book for March Reading Month, and a choice to read over the summer.

There may be incentives to obtain additional tokens as well.

Lijewski said the two Bookworm Vending Machines in the school – one for pre-kindergarten though second-grade students and another in a different wing of the building for third- through fifth-graders – contain grade-appropriate titles such as “The Case of the Weird Blue Chicken and “Giraffes Can’t Dance” for younger readers and “Way of the Warrior Kid” and “Bad Kitty Meets the Baby” for older readers.

There also are plenty of back-up books (nearly 1,200) on hand to re-stock the machines as students select their favorites.

“I’m interested to see which ones they choose,” Lijewski said. “That way when I order again I’m ordering books that the students will like.”

She noted that other area schools such as Hartford are using the same book vending machines.

“We hope you have so much fun picking out books and being able to take them home and enjoy them,” Jean Haskins of the PTO said to students during the Zoom session.

She thanked The Pokagon Fund and the Rotary Club “for helping us make this happen.”

“It was a joint effort and a great partnership, and we’re so happy to be a part of it.”

Haskins also gave credit to Bowen and Lijewski for “getting this up and running. There’s a lot of work that went into it.”

He said the organization’s ongoing Birthday Books effort will continue, only now students can choose their title from the vending machines (a similar program at the elementary level in the River Valley district will go on as it has with books wrapped as presents).

Bowen said Birthday Books for those whose big day happened during the first half of the school year (as well as in January) will be made available once pupils return from break.

“I’m always big into promoting literacy at our school, and I think when you can make it fun and exciting that just brings it up to a while new level and encourages students to read,” he said.

An in-school chance for New Buffalo Elementary students to learn about saving and managing money kicked off the previous week as the Bison Credit Union made its debut.

Bowen said the Credit Union (a partnership between the school and Honor Credit Union) was set to officially open the day the coronavirus pandemic closed schools in 2020 (March 13).

“It’s been long in the works, and we had our grand opening on Monday (Nov. 29) to talk to the kids and teach them how important it is to start saving money,” he said.

The Nov. 29 opening ceremony included a ribbon-cutting ceremony and information on the Bison Kids Credit Union shared with pupils.

It only takes $1 to open an account, and Honor Credit Union (the school’s partner in the endeavor) is contributing $10 when a student account is begun.

School Counselor (and Bison Credit Union staff sponsor) Angela Robertson said there was a lot of interest among fifth graders to be bankers. Going forward three of them at a time will be helping open or add to accounts twice a month.

Bowen said there also are raffle prizes for depositors, and free gifts were available for those making first deposits on Nov. 29.