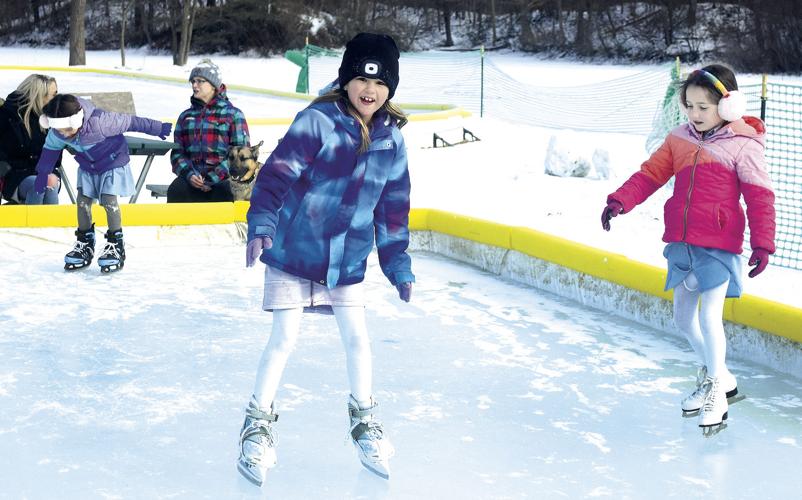 Sienna, Lola and Scarlet Schilling do some skating at the Chikaming Ice Rink in Harbert Community Park on Saturday, Jan. 22. 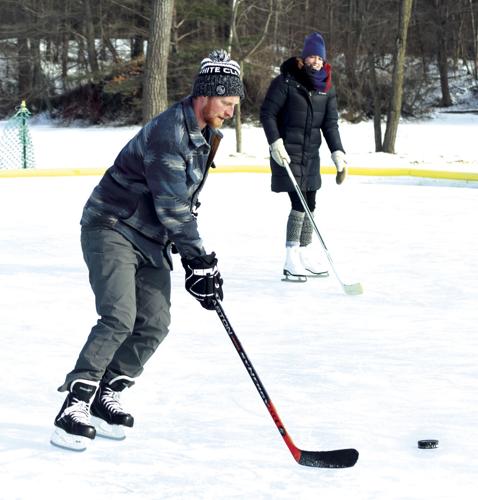 Jake and Mallory Kauffman play some hockey on the Chikaming Ice Rink on Saturday, Jan. 22. 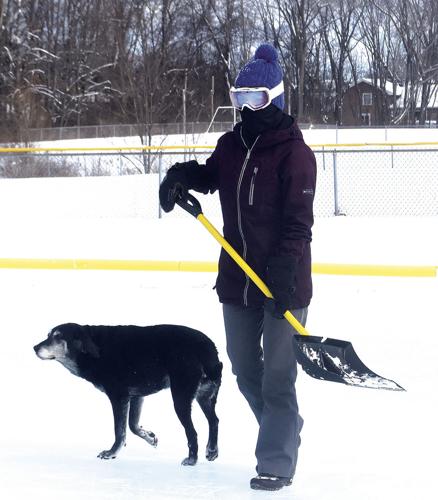 Erika Woluszyk and “Emma” help clear snow off the ice rink at Oselka Park in New Buffalo on Jan. 23. 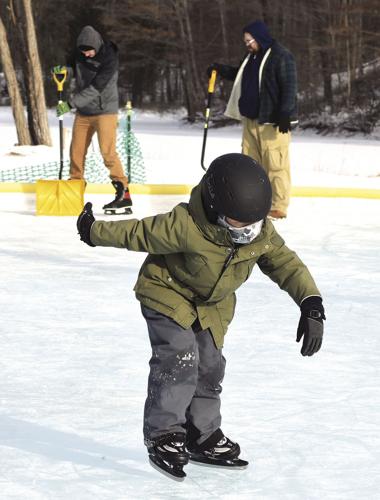 Harrison Honda skates on the Chikaming Ice Rink during a Jan. 22 visit to Harbert Community Park. 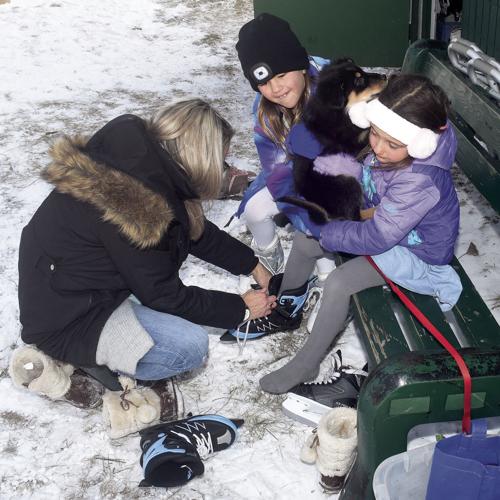 Sienna Schilling (right) gets her skates put on right by mom (Bae Schilling) while sister Lola (center) looks on at the Chikaming Ice Rink. 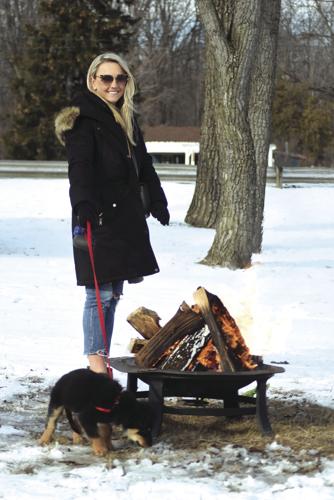 Bae Schilling and “Dingo.” gather around the fire at the Chikaming Ice Rink. 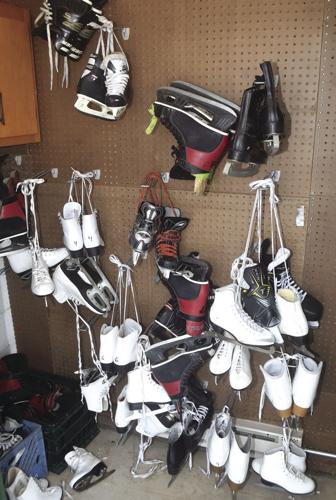 Skates in the closet at the CHikaming Ice Rink.

Sienna, Lola and Scarlet Schilling do some skating at the Chikaming Ice Rink in Harbert Community Park on Saturday, Jan. 22.

Jake and Mallory Kauffman play some hockey on the Chikaming Ice Rink on Saturday, Jan. 22.

Erika Woluszyk and “Emma” help clear snow off the ice rink at Oselka Park in New Buffalo on Jan. 23.

Harrison Honda skates on the Chikaming Ice Rink during a Jan. 22 visit to Harbert Community Park.

Sienna Schilling (right) gets her skates put on right by mom (Bae Schilling) while sister Lola (center) looks on at the Chikaming Ice Rink.

Bae Schilling and “Dingo.” gather around the fire at the Chikaming Ice Rink.

Skates in the closet at the CHikaming Ice Rink.

HARBERT — The first month of 2022 has proven to be a golden age for local ice skating rinks.

Following several mild winters that rarely got cold enough to freeze the ice on rinks at Harbert Community Park in Chikaming Township and Oselka Park in New Buffalo, this January has consistently turned down the temperature to well below freezing.

Visitors to the Harbert rink on Jan. 22 included Jake and Mallory Kauffman of Stevensville, who got in some hockey practice after finding the New Buffalo rink full with “a bunch of kids playing hockey.”

“So we came here instead!” she said.

“Let’s go skating!” exclaimed Scarlet Schilling before venturing out on the smaller kid’s rink in Harbert with sisters Sienna and Lola.

Megan Honda of Sawyer said she began bringing her sons Harrison and Mason to the Chikaming Ice Rink when it first opened earlier in January.

“The day the Facebook page said we could come, we were here,” she said. “And last year we were some of the first skaters too. We are just so grateful.”

Rennie Burian, Alec Burian and Erika Woluszyk were getting the Oselka Park ice rink ready for skaters on Jan. 23.

“Every time it snows we’ve got to be out here clearing it off,” Rennie said. “At night when the temperatures drop we’ll resurface it with our own Zamboni.”

He asked that anyone using the hockey net at the New Buffalo rink to please place it next to the rink on the snow where they’re done so it doesn’t sink into the ice.

During the Jan. 24 Chikaming Park Board meeting, member Shelly Taylor said, “The ice rink has been a huge success so far this year and we’re still early in the season.”

Taylor, a River Valley Elementary teacher, that she has run into some her students at the rink, and received 15 requests for the code to the on-site skate closet in January.

There was discussion about allowing groups to reserve the rink, although no decision was made and several members said there should be enough room for those who show up. If reports of the rinks being too crowded are received the idea maybe revisited. There are two rinks at Harbert Community Park.

Members also expressed concerns over not getting timely notice of a Jan. 22 event held at the rink.

In another Jan. 24 matter, Park Board Chairman Arthur Anderson said a design plan for a possible park at the northeast corner of Berrien and Isobel streets in Union Pier as presented to owner Alan Witt, who has proposed donating the parcel to Chikaming Township. Anderson said a state grant would be needed for development if the township were to acquire the land.

Witt has indicated to the township he would like the land to remain mostly wooded with an area be set aside for a children’s art area with tables and easels with him having naming rights for the park. On Nov. 22, the Park Board rejected the inclusion of a Bank-Shot Basketball court at the site.

On Jan. 24, Park Board member Steve Ellis said “I think it would be a good place to invest some money and some attention.”

Anderson said he feels Witt is still interested in making the donation of some type of memorial park.

“He has not made a decision yet, and we have not voted on it yet. If we recommend it to the township they would want to have a budget plan … and the means to finance it,” he said.

Ellis said he is in the process of organizing volunteers and public donations for the potential park.

And the Park Board on Jan. 24 approved a motion to have Abonmarche take the necessary steps to expand the scope of work on the Harbert Community Park improvement contract to an estimated cost of $100,000. Additional expenses are slated to include: an electrical connection to the performance area; adding to the path included in the Phase 1 plan, and adding benches, trees and landscaping.

Park Board member Garth Taylor said they are basically going back to the original Phase 1 plan “given that what we ended up with cost a lot less than we thought it was going to.”

Anderson said the current plan includes taking the walking path “to the water level, turn right and go to the performance stage.”

Taylor said he would like to see a brick patio added to a future phase of the park development.

In other Jan. 24 Chikaming Park Board business:

• Discussed granting access at Center Street/Miller Beach for demolition of a structure severely damaged by a recent fire at 15826 Lakeshore Road. (Anderson said the request was forwarded to the Township attorney for an opinion). It was later decided that a committee of three Park Board members – Taylor, Jill Underhill and Ellis – make a recommendation on the matter to the Township Board.

• The idea of recommending to the Township Board that an online donation program for the Park Board be established was OK’d.

• The board passed a motion to seek a benefits package for a full-time parks employee in the township budget process.

• OK’d applying for a matching ReLeaf grant for tree planting.

• Scheduled the next Park Board meeting for March (with a special meeting to be called earlier if needed).