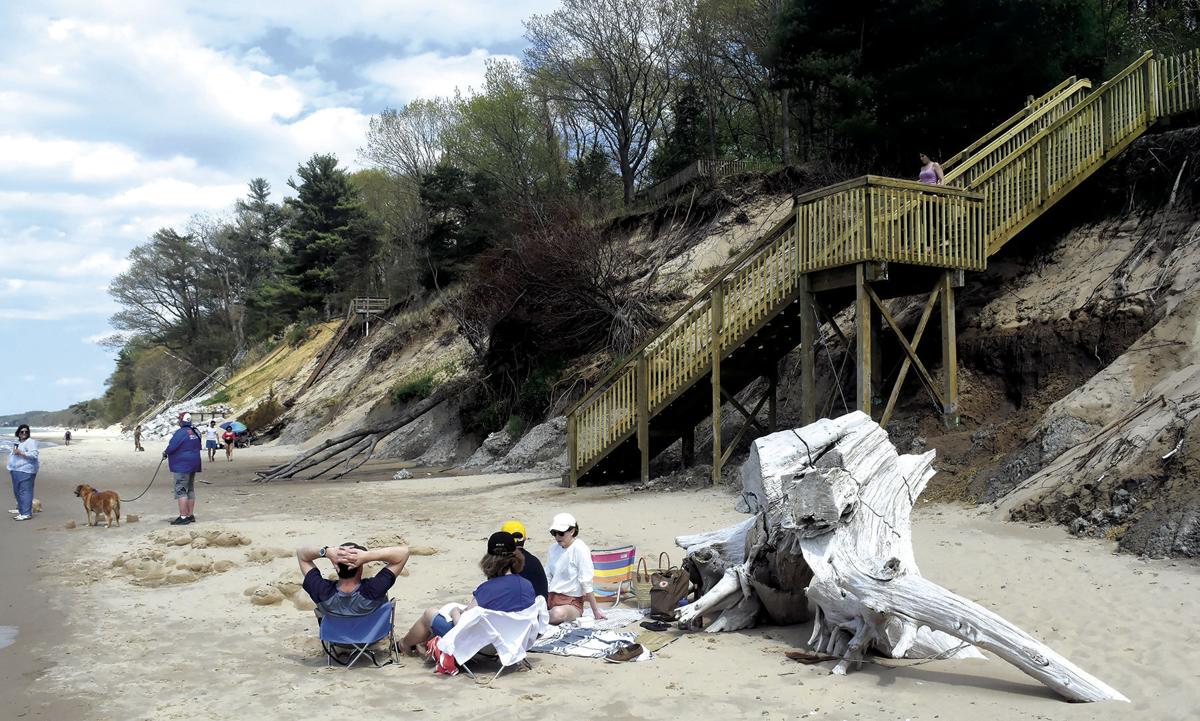 The new stairway to Chikaming Township’s Harbert Beach being put to good use on the summer-like afternoon of Sunday, May 2. 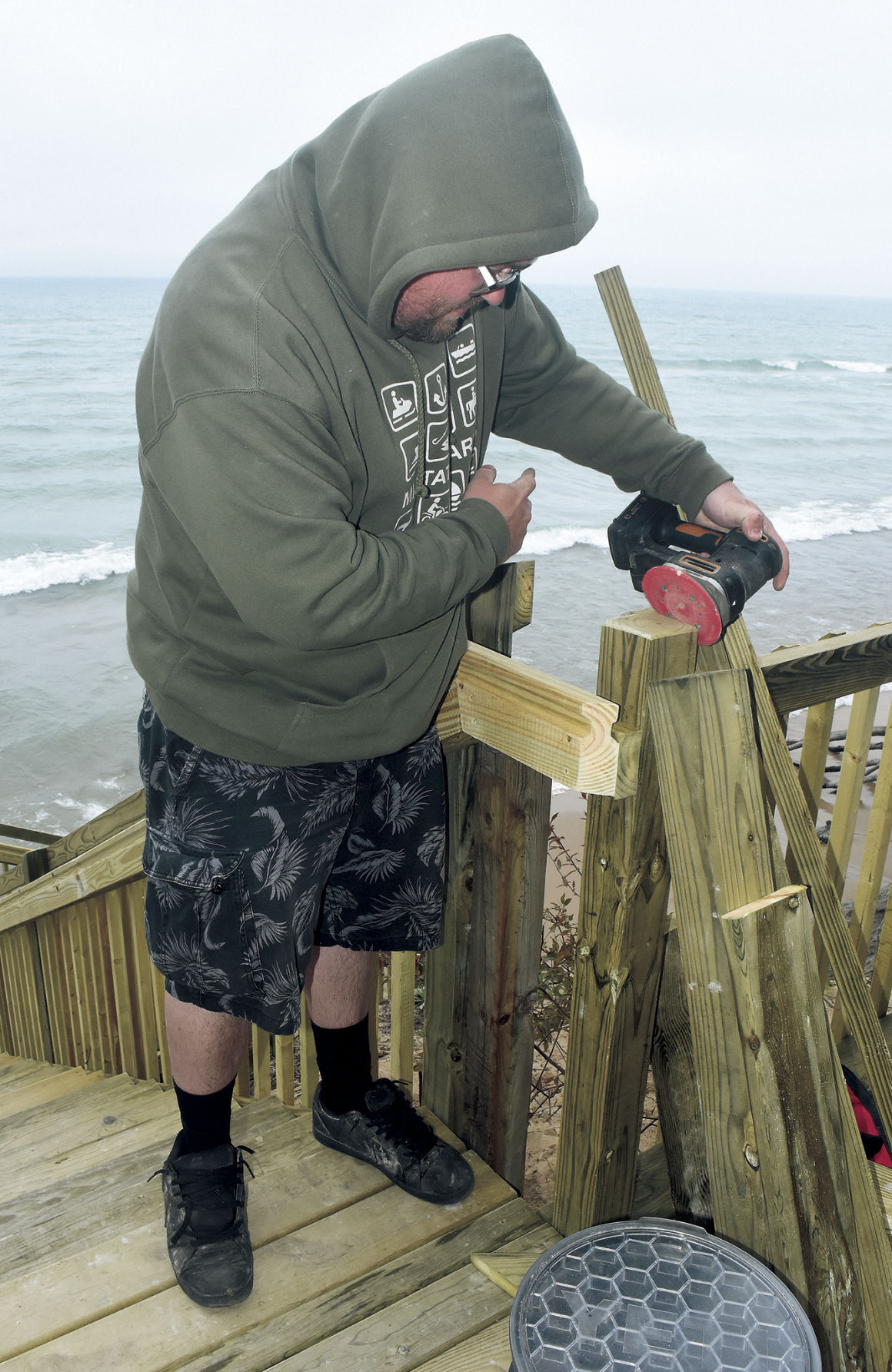 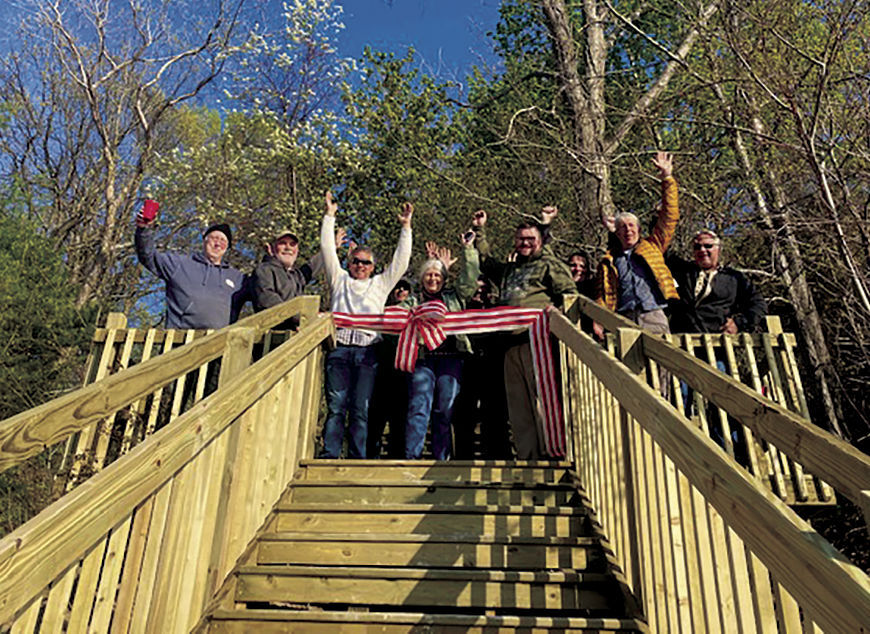 A celebratory moment on April 29 for volunteers who pitched in to build a new set of stairs at Chikaming Township’s Harbert Beach. 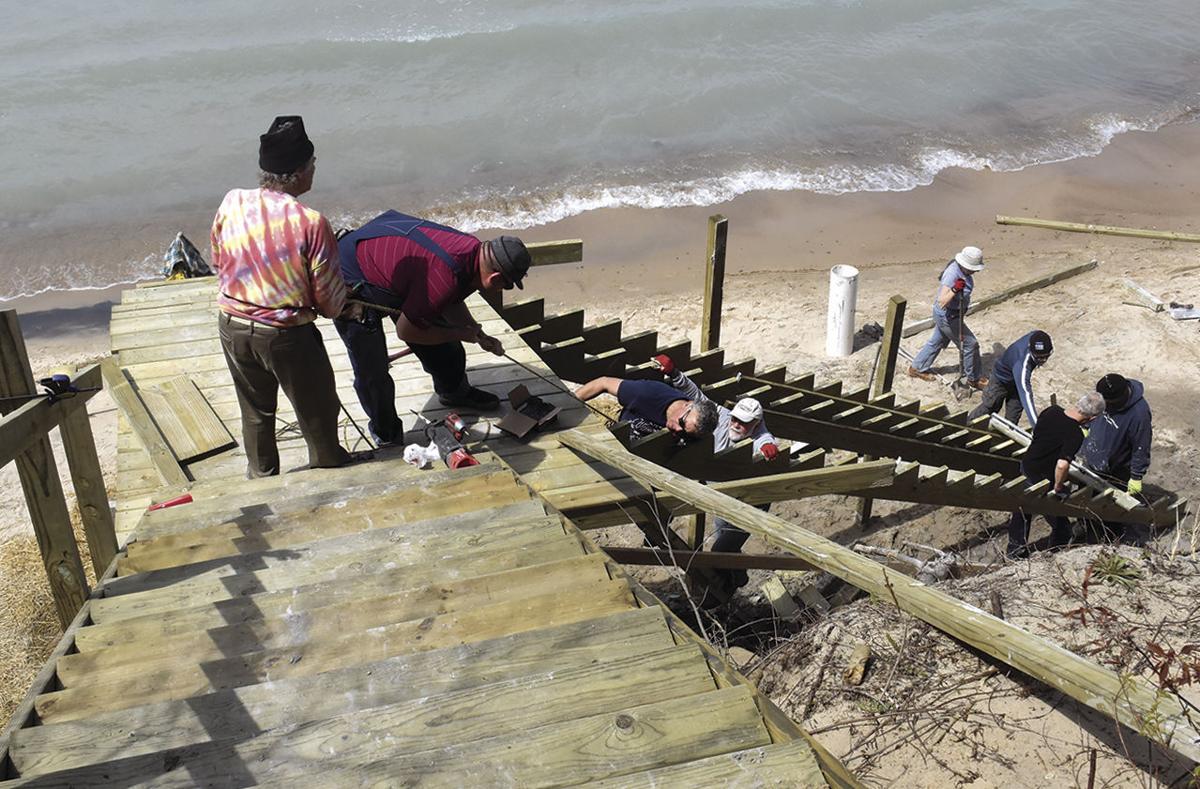 The new stairway to Chikaming Township’s Harbert Beach takes shape during the second week of the project. 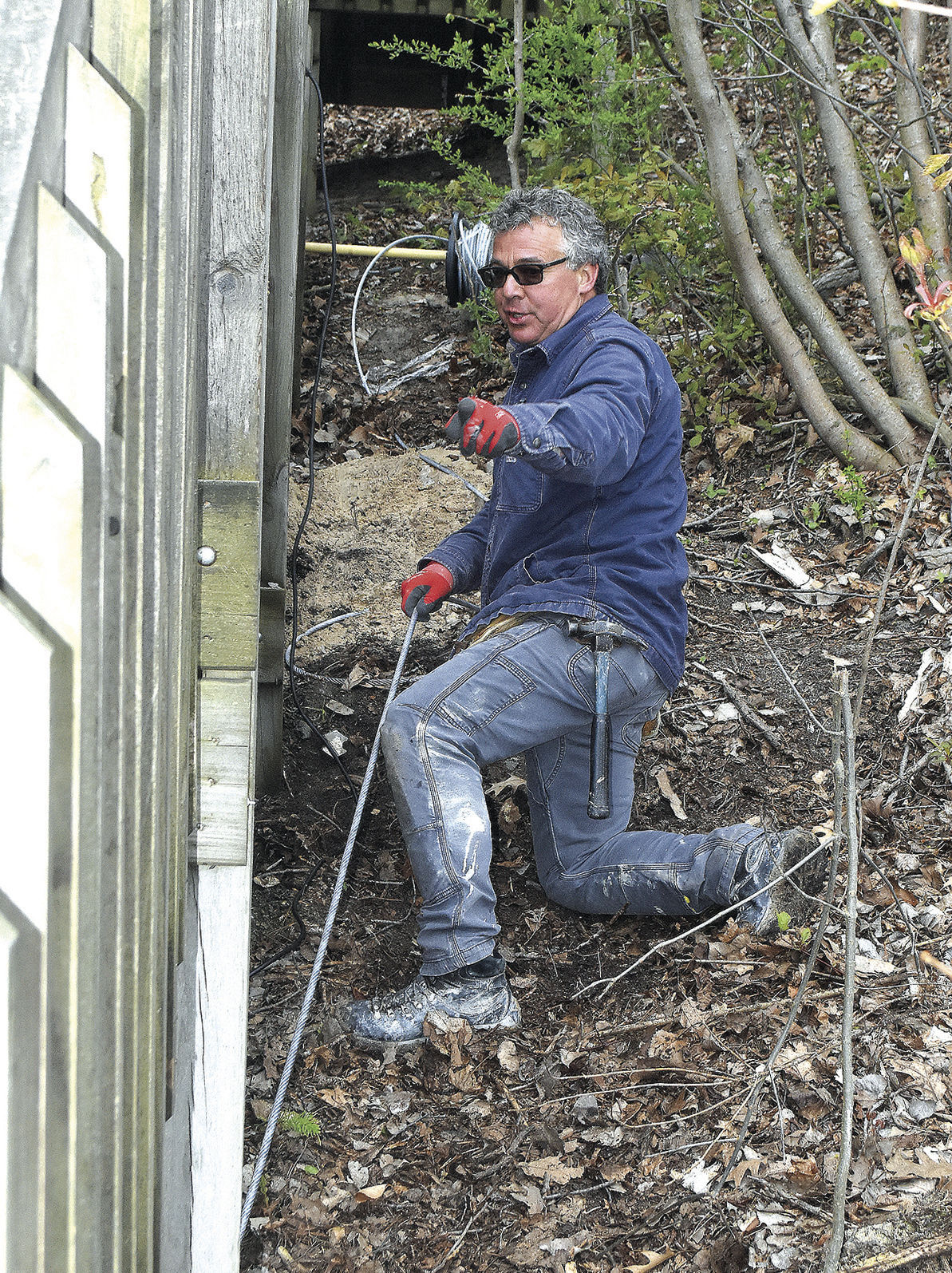 Joe Sipek works on the cable system that helps support the new section of the Harbert Beach stairs.

The new stairway to Chikaming Township’s Harbert Beach being put to good use on the summer-like afternoon of Sunday, May 2.

A celebratory moment on April 29 for volunteers who pitched in to build a new set of stairs at Chikaming Township’s Harbert Beach.

The new stairway to Chikaming Township’s Harbert Beach takes shape during the second week of the project.

Joe Sipek works on the cable system that helps support the new section of the Harbert Beach stairs.

HARBERT — The new, improved stairway to Harbert Beach was completed in time for the summer-like weekend of May 1-2.

A group of volunteers was busy putting the finishing touches on a new structure that includes a spacious two-sided deck that oversees the beach along with several flights of five-foot wide stairs on April 28.

“People who don’t want to go all the way down to the beach to watch the sunset, they can come this far,” said Joe Sipek, one of those volunteers.

The entire process took about three weeks, and Sipek said it was closer to two weeks in work days by volunteers

“That’s because we had all these great volunteers. I think we had 14 one day.”

Many of the same people helped rebuild the Cherry Beach stairs in the summer of 2020.

The effort to replace the bottom portion of the Harbert road-end beach stairway, washed away in 2019 by a combination of storms and historically high lake levels, was completed way ahead of schedule.

While the handrails and benches were sanded and other final stages of the Harbert project were being tackled on April 28, Sipek was under the steps installing and tightening steel cables for the tensioning system being used to strengthen and support the structure as it descends a steep slope to the shore. A similar system of cables supports the Cherry Beach stairs a short distance to the southwest.

Park Board member Jocelyn Verlee said the last day of the project (Thursday, April 29) “started with us huddling under umbrellas to keep dry and turned into a fabulous sunny day. The details of anchoring the cables and securing the guard along the walkway finished out the day.”

She noted that the “Beach Closed” signs were taken down and the stairs were opened providing beach access to the public, with the Harbert Stairs Committee (EnRico Heirman, Steve Ellis, Joe Sipek, Arthur Anderson, Sherri Curry, Jocelyn VerLee and the Chikaming Park Board) hosting an April 29 ribbon-cutting and cookout in celebration of the accomplishment.

On the balmy afternoon of Sunday, May 2, it was apparent that Lake Michigan has receded from its recent high-water mark as there was enough sand for beach-goers who had used the new Harbert stairs to stay dry.

Brooke and Stephen Long were among those enjoying some time at Harbert Beach.

Brooke said it’s the closest beach to their home, and Stephen said they would come to the top portion of the stairway (which did not have access to the beach) to watch sunsets last year.

“What I really like about this one is that the platform is very wide, its really accommodating, there’s a lot of spacing,” she said. “It’s truly like a landing.”

During the April 5 Chikaming Township Park Board meeting Chairman Arthur Anderson thanked Sipek, Dan Menitoff and Jocelyn VerLee for their work on the Harbert stairs, and the board approved the expenditure of up to $10,000 for the project.

The Chikaming Township Park Board will hold a public meeting at 6:30 p.m. Monday May 10 to discuss a plan of enhancements to Harbert Community Park, 13495 Red Arrow Highway, and invite comments from the community.

The Park Board has engaged local architect Bill McCollum and landscape architects and urban designers Altamanu Inc.  to create a development plan for the park. The design, which is based on the Chikaming Township Park Board Five-Year Strategic Plan will include a small performance venue for events, completing an ADA enabled pathway from parking lot to pond and performance venue and native landscaping around pond.  The plan envisions removing the existing ball field to create an open meadow for events.

Future developments may include viewing platforms at pond, a series of connected loop trails around the park, a children's splash pad and Discovery Center. The plan will integrate existing plans to redesign Red Arrow Highway and the Berrien County Park Department Linear Park plan.

Due to the existing public health emergency in Berrien County, the public meeting will be held virtually.  Call in and log in information is available at the Township website: www.chikamingtownship.org.