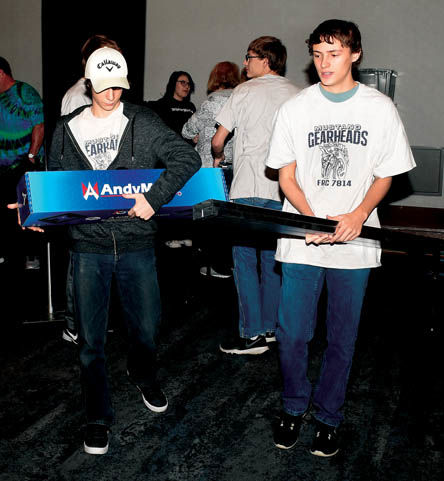 Jacob Ashcraft and Cody Kidder of the River Valley Gearheads FIRST Robotics squad carry some of their new parts back to the rest of the team on Jan. 4 in the Grand Upton Hall at Lake Michigan College after the 2020 INFINITE RECHARGE competition had been announced. - photos by David Johnson 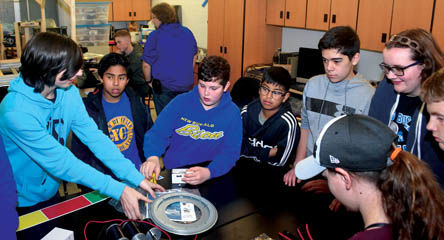 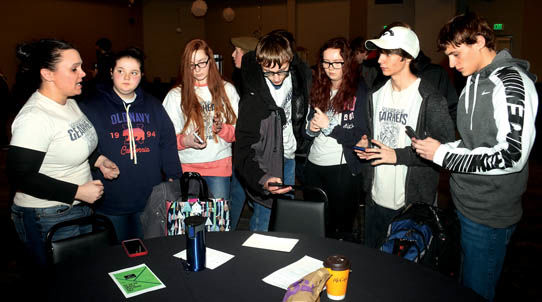 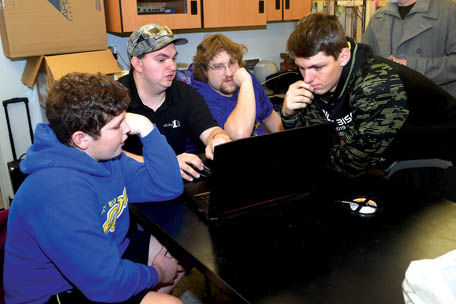 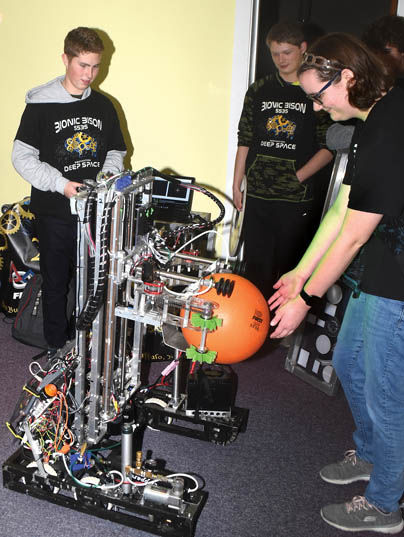 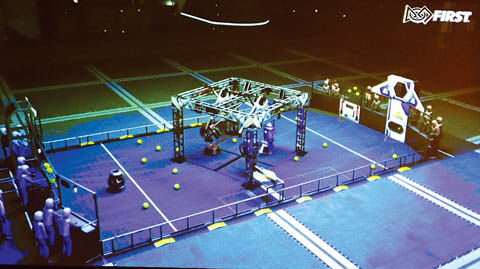 A simulation of the 2020 FIRST Robotics INFINITE RECHARGE field of play that was shown during the Jan. 4 livestream kick-off event. 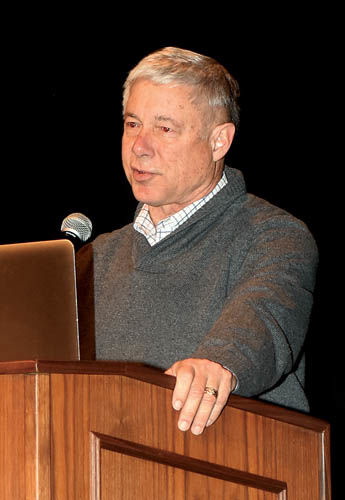 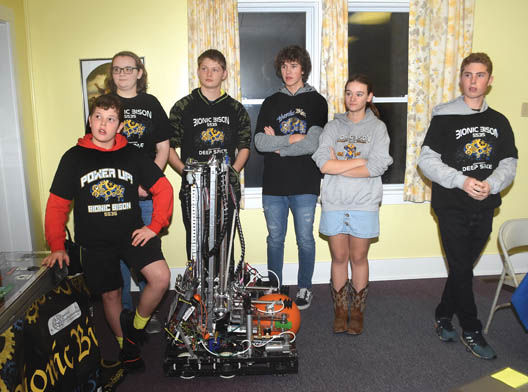 Members of the Bionic Bison team during a Jan. 3 presentation to the Rotary Club of Harbor Country.

Jacob Ashcraft and Cody Kidder of the River Valley Gearheads FIRST Robotics squad carry some of their new parts back to the rest of the team on Jan. 4 in the Grand Upton Hall at Lake Michigan College after the 2020 INFINITE RECHARGE competition had been announced. - photos by David Johnson

A simulation of the 2020 FIRST Robotics INFINITE RECHARGE field of play that was shown during the Jan. 4 livestream kick-off event.

Members of the Bionic Bison team during a Jan. 3 presentation to the Rotary Club of Harbor Country.

BENTON  HARBOR — The 2020 FIRST high school robotics season was kicked off on Saturday, Jan. 4, with the Star Wars-powered announcement of an INFINITE RECHARGE challenge.

The 2020 FIRST Robotics season is taking place in partnership with Lucasfilm as part of its Star Wars: Force for Change initiative, and the kick-off livestream featured videos with stars of the long-running series such as Daisy Ridley, John Boyega and Luke Sywalker himself, Mark Hamill.

“In INFINITE RECHARGE forces threaten the future of First City,” Hamill states during a video previewing the game. “Together we must shield our greatest resources from dangers to protect the citizens, culture and history of our planet. With assistance from your trusty droids, you and your crew will race to overcome obstacles and collect renewable energy cells to charge your city’s shield generator and protect First City. Through the power of collaboration you will bring hope and strength to the force that binds us all so that together we rise.”

Later in the program the Star Wars droid R2D2 was involved in a tour of the INFINITE RECHARGE playing field.

Among the area Robotics teams gathered at Lake Michigan College for the officials kick-off was the River Valley Gearheads squad.

Jenny Jones, one of the Gearheads mentors, said there are 7 to 8 students on the team. Seven attended the kick-off — Aubrey Arnold, Raven Sanford, Josh Kidder, Erica Horton, Jacob Ashcraft (a senior and team captain), Cody Kidder and Aidan Olson.

After seeing the initial description of INFINITE RECHARGE, Sanford said she already had a couple ideas of what the team could do.

“It was exciting,” she noted.

New to the squad is senior Aidan Olson, who said he is thinking about getting a Mechanical Engineering degree after high school the dual enrolled student expects to have an associates degree by the time he graduates).

Olson said he’s been interested in getting hand-on experience in building something for a long time.

Gearheads mentor Paul Boughner said one of the students will focus on marketing/seeking sponsors and another the safety requirements.

Jenny Jones said the plan is to rotate the other Gearheads on the playing field (four compete at a time) during the lengthy two-day tournaments.

Although the build period for robots has been extended from six weeks to the date of a team’s first district competition (that’s St. Joseph on March 5-7 for both River Valley and New Buffalo) Jones said the goal for the Gearheads is to have a completed robot by Valentine’s Day in the wake of a 2019 campaign hampered by 11 snow days and other delays.

“Last year was really stressful, coming into the first competition at St. Joe and having that robot bagged for almost two and a half week uncompleted,” she said.

Jones  said this year’s challenge looks to be “a really cool game.”

Members of the New Buffalo High School Bionic Bison team watched the kick-off livestream at their school, and immediately began planning for the challenge of designing, building, testing and coding a robot that can handle the multiple tasks required by this year’s competition.

Robotics Advisor Robert Hauch said INFINITE RECHARGE looks similar to recent games FIRST STRONGHOLD and FIRST STEAMWORKS with the “curve ball” of pulling the robots up on a moving structure at the end of each match.

“It’s going to be a fun challenge.”

Twelve members of the New Buffalo team began the process of building their 2020 robot soon after the kick-off had ended, meeting with parents, going through the Kit of Parts that was retrieved from LMC, and discussing options for the design.

Last year the Bionic Bison were part of the three-team alliance that placed second at the St. Joseph tourney. In 2015 they received a Rookie Award, and the following year received Best Alliance and Judges Award honors. They also have earned a Team Spirit Award (2016); an Engineering Inspiration Award (2018); and a Quality Award (2019). And the Bionic Bison qualified for the state robotics tournament in 2018.

Students do the majority of the building, marketing and programming with mentors providing guidance and assistance. The squad’s community outreach efforts include an Engineer’s Night at the Elementary School (where pupils can operate the robot); helping with the Lego Robotics portion of the BASE after-school program; the New Buffalo Area Schools Summer Day Camp; a T-shirt cannon bot that is used at games; and helping with animated elements of the New Buffalo community float.

Both the Bionic Bison and the Gearheads also are slated to participate in the East Kentwood district competition  set for April 2-4.

Prior to the announcement of the INFINITE RECHARGE game, master of ceremonies Tim Dunaj hosted a local kickoff ceremony at LMC that included a question-and-answer session with panelists Dave Goodenough of Edgewater Automation, Bruce Klumpp of Kendall Electric, Kim Wise of the City of South Haven, Paul Layendecker of Mid-West Family Broadcasting, and Courtney Dunaj of Prism Science & Technology.

Sixth District Michigan Congressman Fred Upton talked about his longstanding support for FIRST Robotics and a future featuring autonomous vehicles, life-saving advances in health care and other scientific breakthroughs that young people involved in the program will help make possible.

He said proceeds from a special coin to be released in 2021 paying tribute to the astronauts of the Challenger Space Shuttle will benefit STEM education and FIRST.

Much of the kickoff featured tributes to Dr. Woody Flowers of MIT who established a robotics course at the college that served as the template for FIRST and other competitions involving robots. Flowers, who passed away in the fall of 2019, also came up with the “gracious professionalism” mantra that serves as the spirit of the program.

FIRST founder Dean Kamen said he is confident the daunting challenges facing our world — such as the need for more and more energy while also reducing the negative impact on the environment — will be met thanks to the efforts of the next generation currently involved in FIRST (later adding that millions of kids have come through the program).

“As I’ve said for 30 years the only difference between science and science fiction is timing … Every generation aspires to accomplish something that nobody believes is possible,” he said.

INFINITE RECHARGE focuses on protecting “FIRST City” from an impending asteroid impact. Two alliances consisting of three teams each will compete to perform various tasks, including shooting foam balls known as Power Cells into high and low goals to activate a Shield Generator, manipulating a Control Panel to activate the shield, and returning to the Shield Generator to park or climb at the end of the match. The objective is to activate the shield before asteroids strike FIRST City, a futuristic metropolis modeled after Star Wars.

INFINITE RECHARGE is played on a 26 foot, 11 1/4 inch by 52 feet, 5 1/4 inch field bounded by short transparent polycarbonate guardrails on the longer sides and the taller Alliance Station walls on the shorter side. The field features two sectors, with each containing one end for each alliance combined with the center area. The sector contains robots at the start of each match, while drivers control their robots at the alliance station. The center area contains the Shield Generator and the Trenches.

The Shield Generator is a large box structure located in the center of the field. It contains both alliances Rendezvous Points, as well as the two Generator Switches.

There are two Power Ports on the field, with one at each Alliance Station. An alliance’s Power Port is located at the opposing alliance’s Alliance Station, requiring robots that intake from the Loading Bays to drive across the field in order to score Power Cells. There are three levels of scoring on a Power Port. The rectangular Bottom Port is worth two points in autonomous, or one in the teleoperated period. The hexagonal Outer Port is located above the Bottom Port, and is worth four points during the autonomous period, and or two points in teleop. The Inner Port is located inside of the Outer Port, and is a much smaller circular hole set in the back of the Outer Port. It is worth six points in autonomous, and three during teleop.

There are two Control Panels placed on either side of the middle of the field, in each alliance’s Trench. They are large discs, with eight colored wedges (red, yellow, blue, and green, repeated once) printed on both the top and bottom. There is a glass panel on the bottom of the Control Panel, however, its wedges are still visible from underneath. After activating Stage 1, an alliance may may score 10 points by performing Rotation Control on the Control Panel. This entails spinning the Control Panel at least 3 times, but not more than 5. Rotating one wedge past a fifth rotation resets this task, and the rotations must be completed again. After activating Stage 2, the alliance may score 20 points by performing Position Control. This entails rotating the Control Panel to a certain color specified by the Field Management System (ie., it is told to the robots, and they must process this information) to activate the Shield Generator, gaining the alliance one ranking point should they fully activate Stage 3.

An alliance’s Rendezvous Point is located underneath the Shield generator, and is marked with each alliance’s color on three sides, with the fourth side being a black line separating the two Rendezvous Points. Alliances gain 5 points for each robot parked there when the game ends.

A Generator Switch is located above each alliance’s Rendezvous Point, and is attached to the Shield Generator. During the final 30 seconds of a match, robots may extend up and attach to the bar on the bottom of the switch. Each robot attached to the switch and off the ground at the end of the match is worth 25 extra points. The switch is able to swing back and forth when robots attach to it, and there is an additional 15 point bonus for balancing the switch within ~8 degrees of level. An additional ranking point will also be given to an alliance if their Endgame Scoring (ie., that of climbing and parking) exceeds 65 points.

To find FIRST Robotics Competition events and/or teams in your area, visit http://www.firstinspires.org/team-event-search.