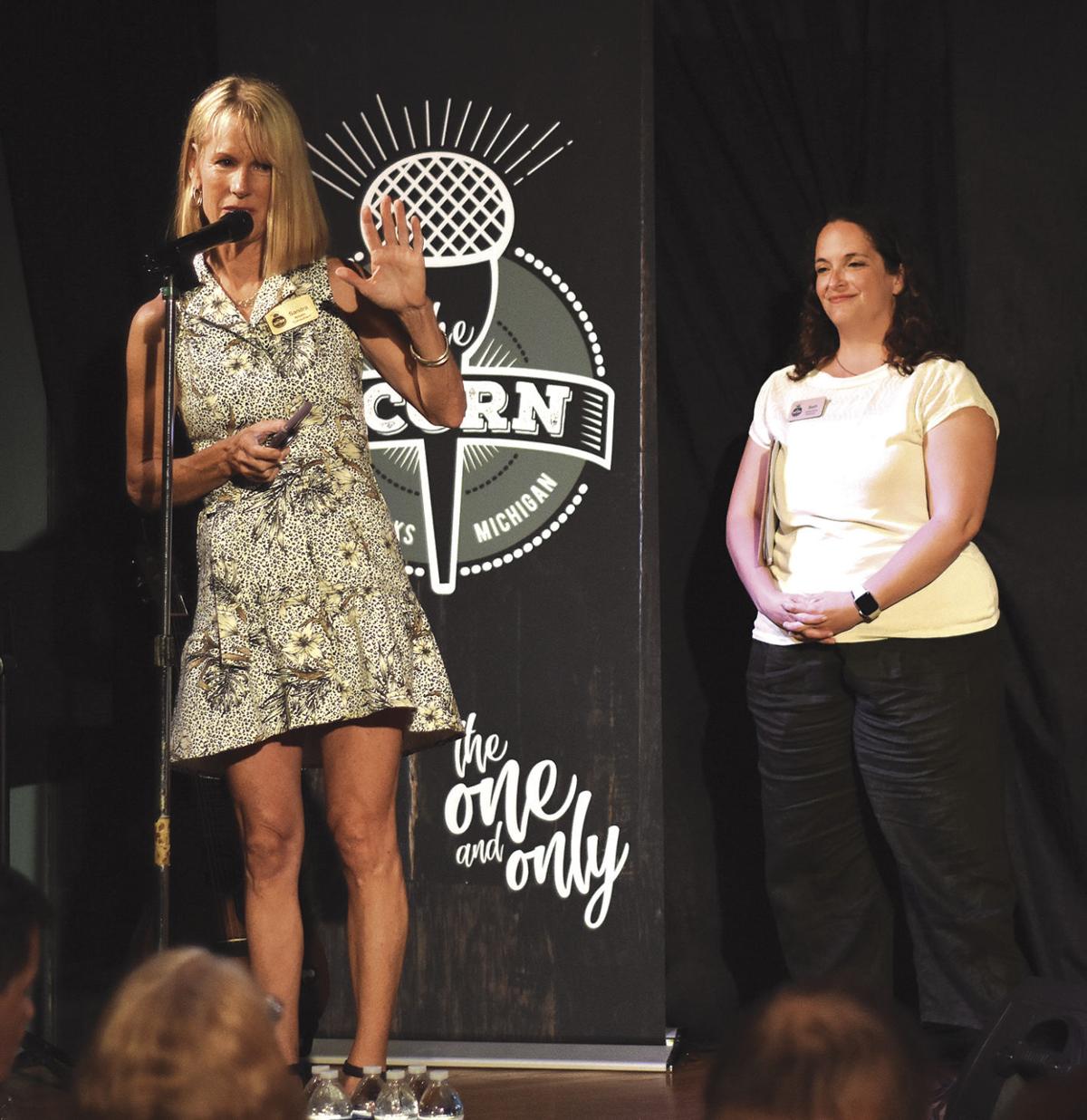 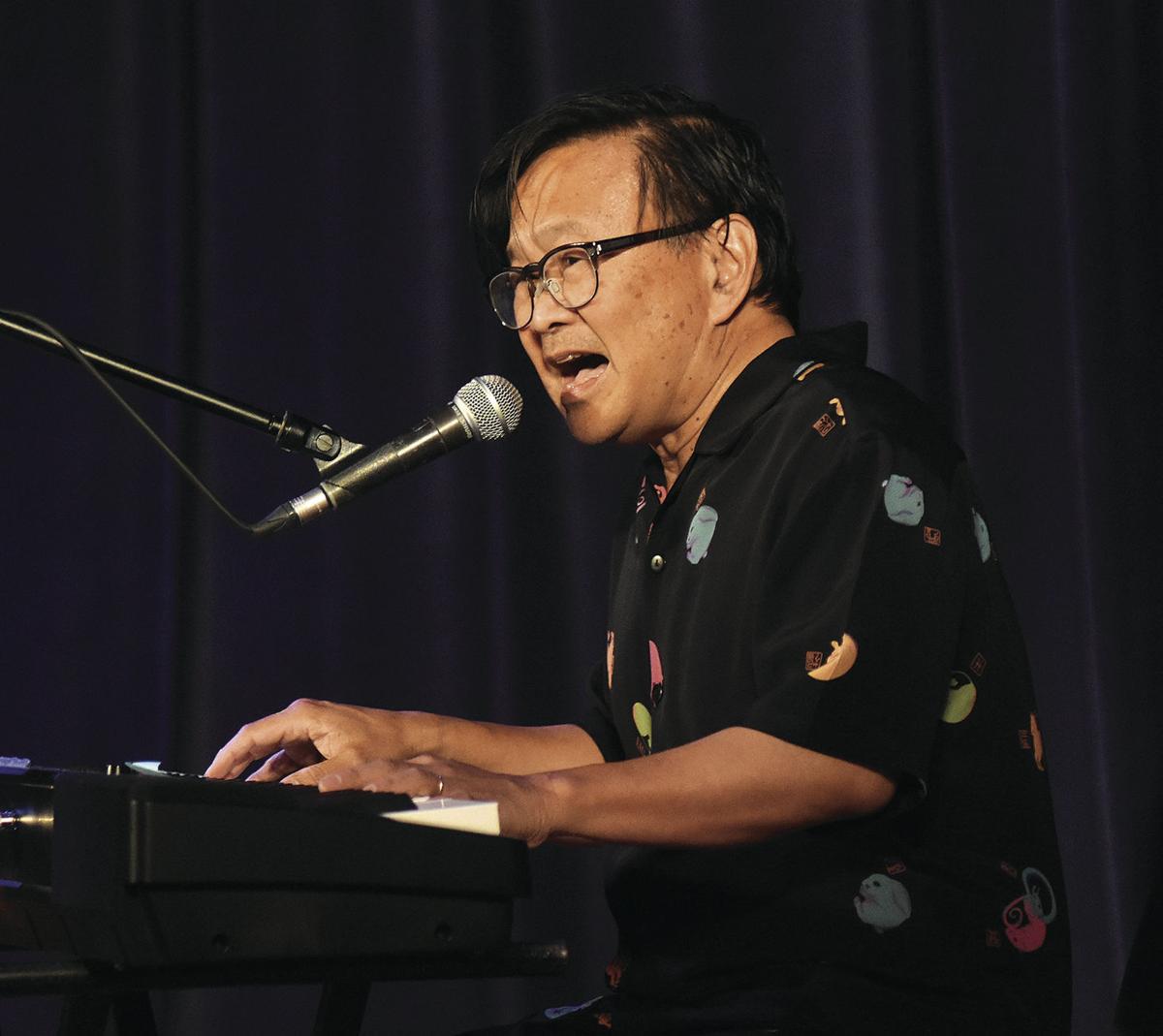 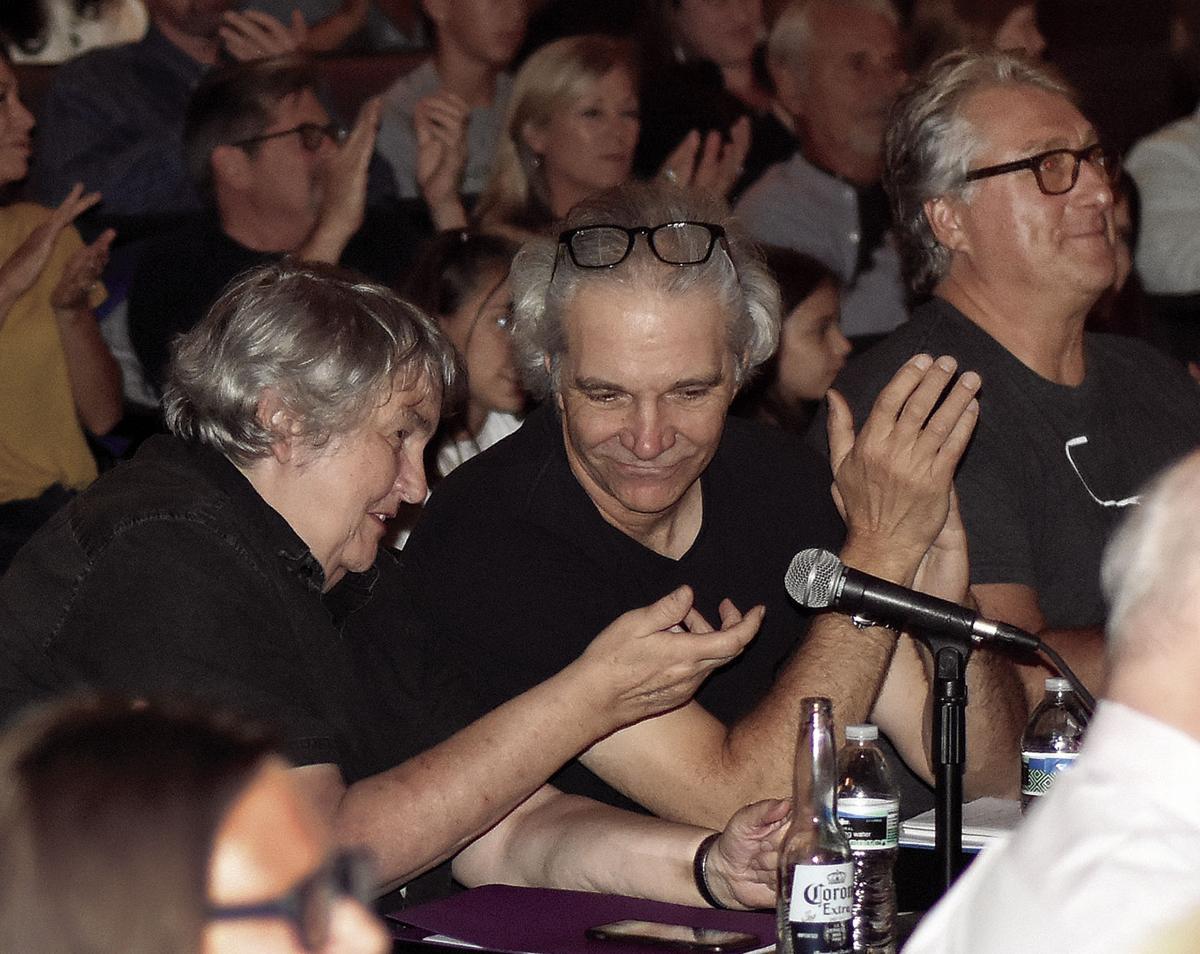 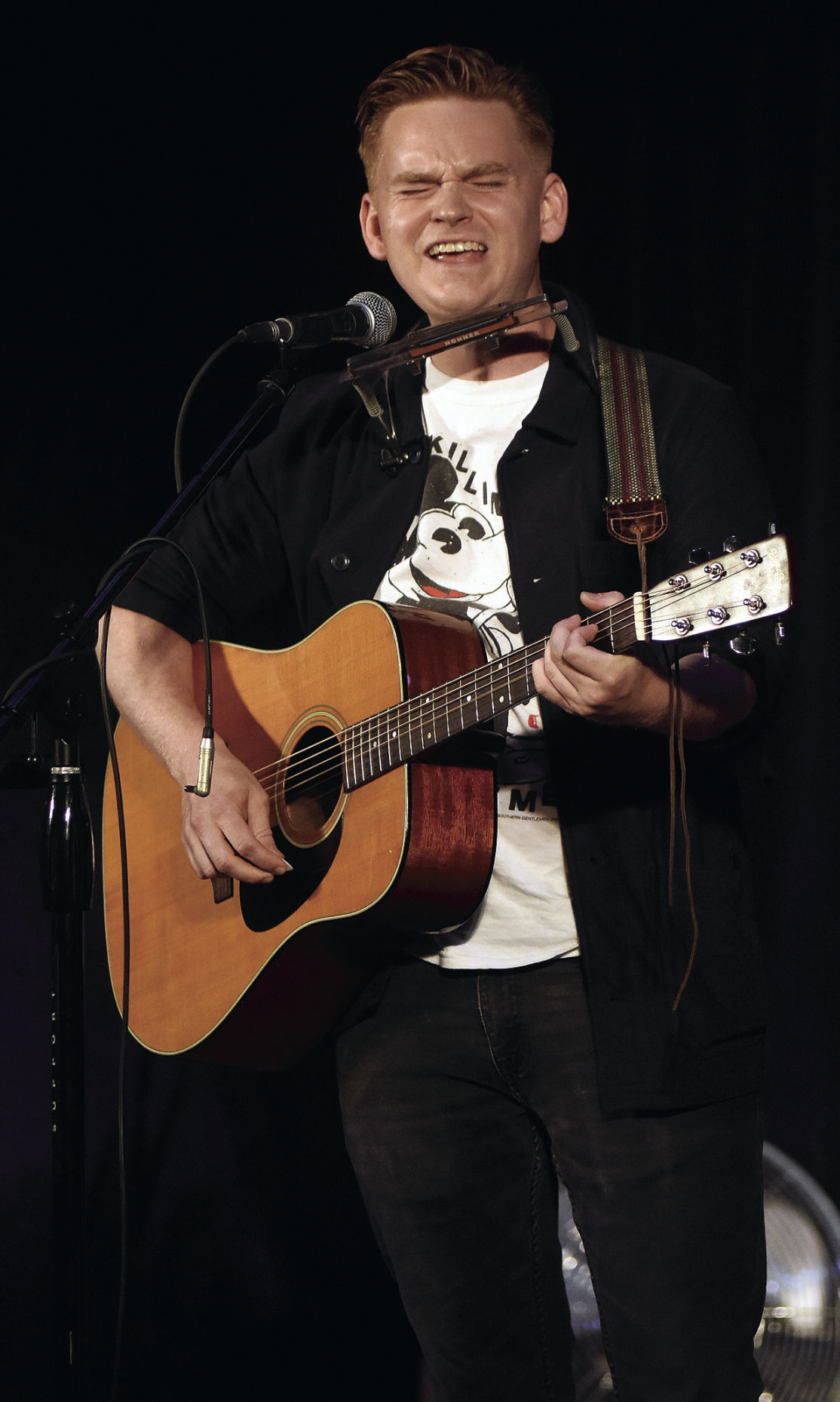 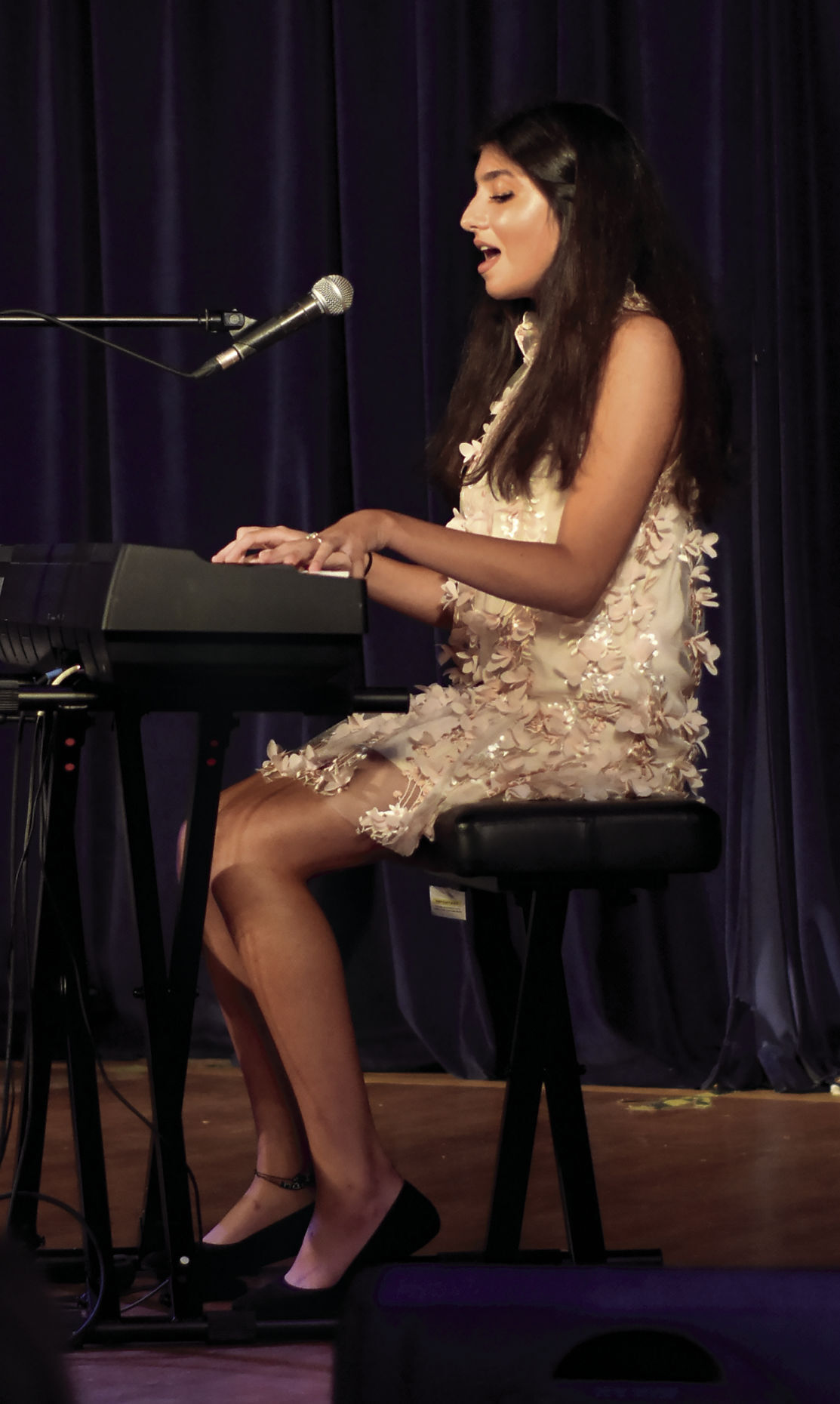 Isabelle Pouya plays piano and sings “Ashes of Dreams” on the Acorn stage. 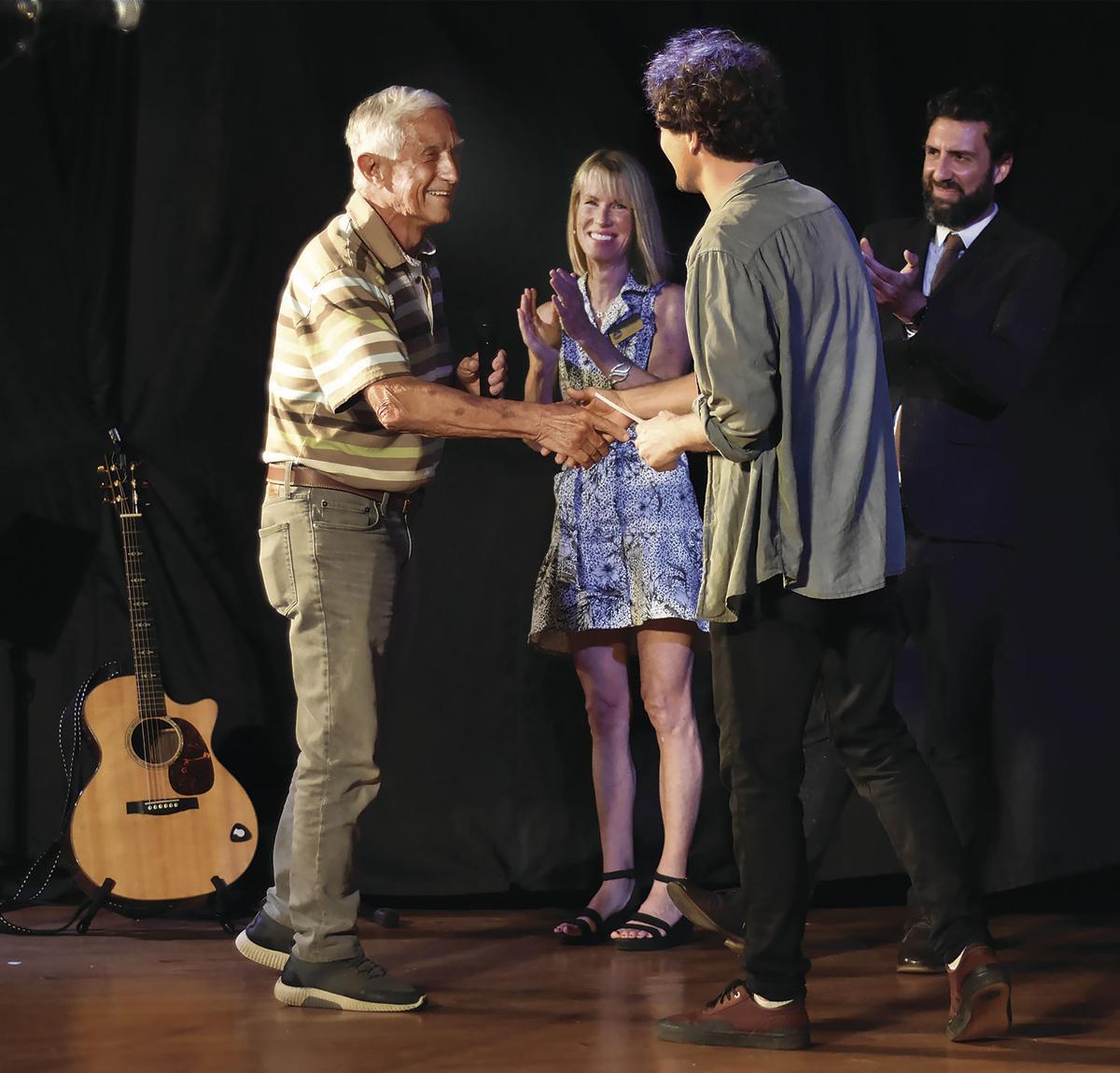 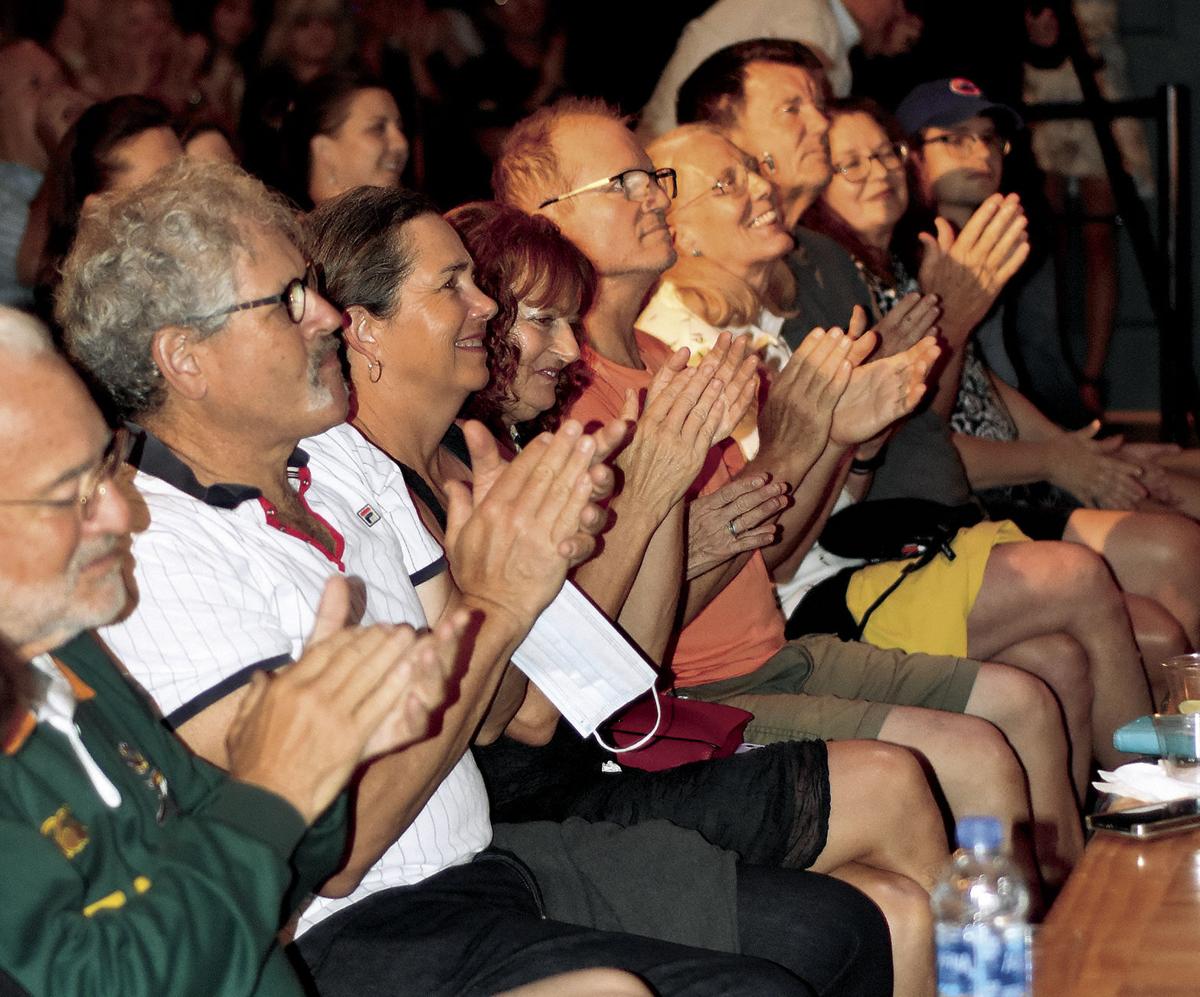 Cheering for an Acorn Singer Songwriter Competition performer on July 17.

Ollie Davidson belts out a tune during the July 16 Acron Singer Songwriter Competition. 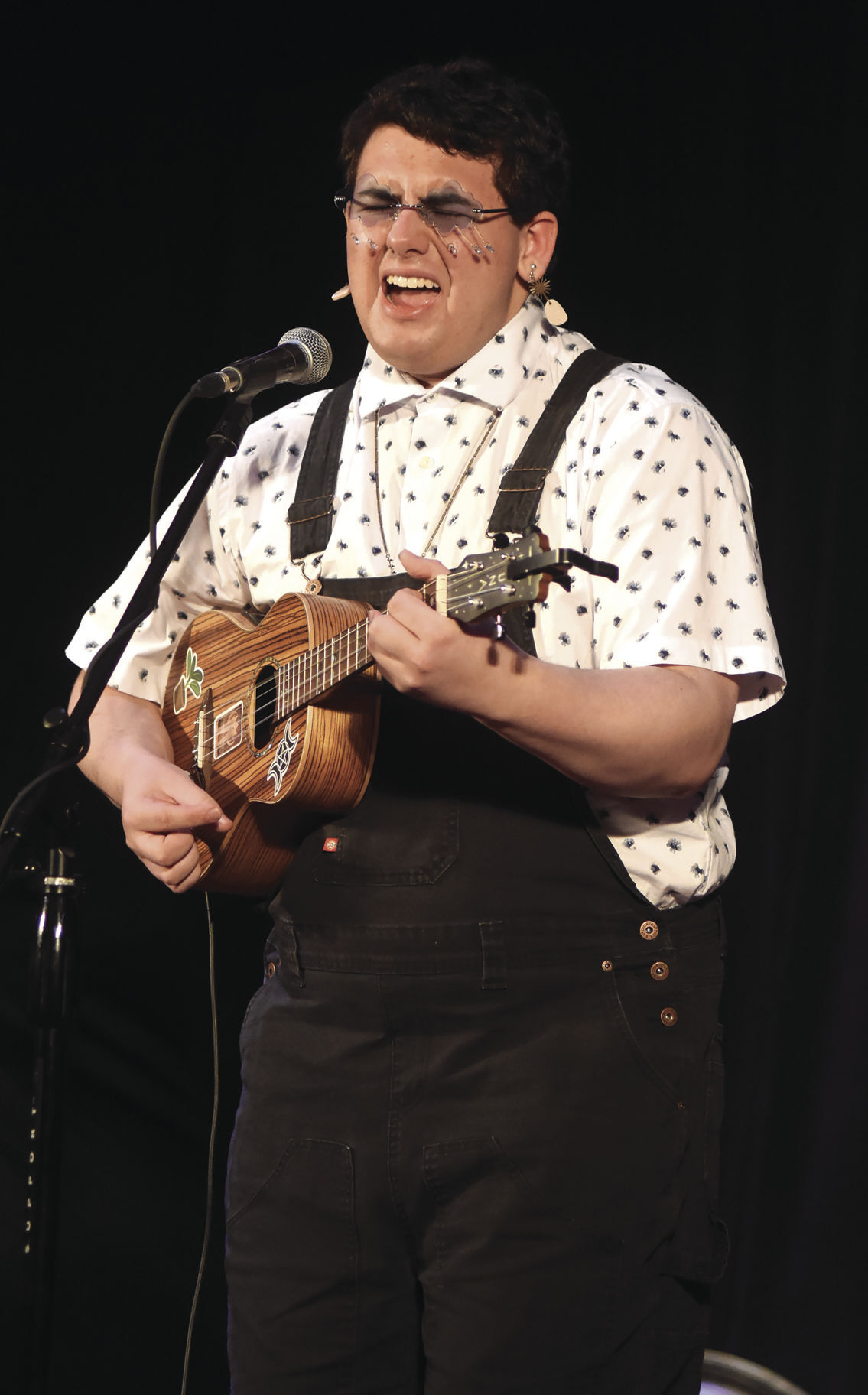 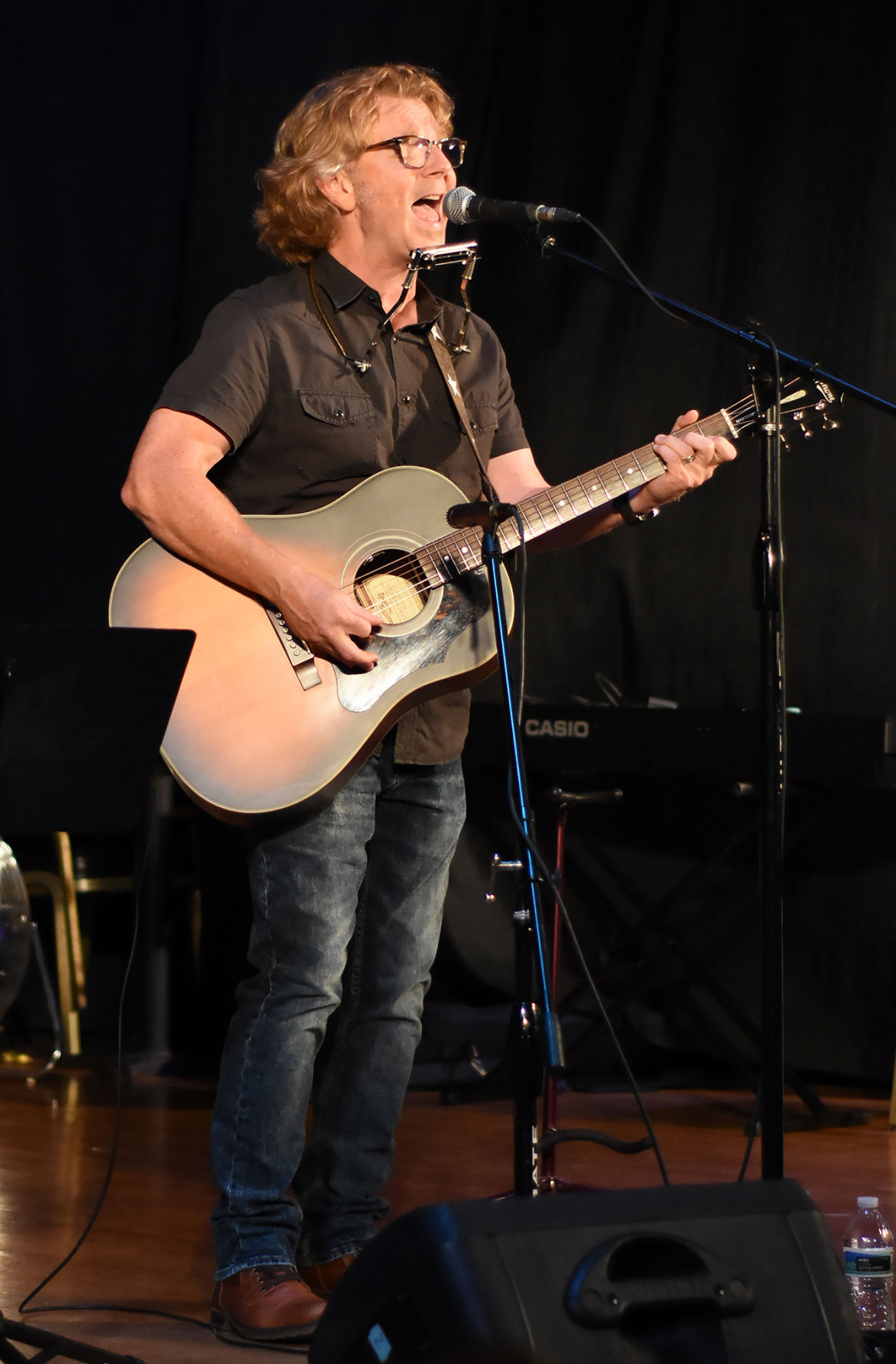 Doug Harsch performing “Those Kids Are Alright” during the Acorn Singer Songwriter Competition.

Isabelle Pouya plays piano and sings “Ashes of Dreams” on the Acorn stage.

Cheering for an Acorn Singer Songwriter Competition performer on July 17.

Ollie Davidson belts out a tune during the July 16 Acron Singer Songwriter Competition.

Doug Harsch performing “Those Kids Are Alright” during the Acorn Singer Songwriter Competition.

After winning, Hildebrand said all of the performers were great, adding “it’s so important that people believe in themselves and continue to do music and share art.”

Acorn Center for the Performing Arts Artistic Consultant Sandra Thompson said “every single one of them are winners … we are so grateful, so thrilled to have these performers on our stage and to have support from you guys the way you do.”

Hildebrand performed solo on the Acorn stage after the other half of acoustic duo Scott & Lila (Lila Despoix) was unable to fly in from Germany. Despoix is from Paris, and they met busking in the streets of Berlin, Germany, in 2019. Since then, they have written and recorded an album and performed all over Germany, France, Italy, Sri Lanka and the United States.

Hildebrand’s opening song was “Serafina.” He performed “Mississippi River” in the second round – which included a crowd-pleasing “down to the river” sing-along chorus that at one point called out Three Oaks.

Second place went to Will Fancher, a musician and songwriter from Chicago by way of Boston and Nashville. His songs have appeared on stage at The Second City, The Annoyance, and Laugh Out Loud Theater. His opening number was “Moonlight & Miller Light.” His second-round song was “Your Momma Raised Hell Before She Raised You.”

Two of the three finalists normally perform as part of a duo.

Third-place performer Ollie Davidson is a member of the Chicago duo Almond&Olive, known for creating and performing songs that span the folk and Americana genres. In 2021, Almond&Olive appeared on NBC’s “The Voice.”

“They are making a living on this, performing all over the United States,” said Singer Songwriter Competition Emcee Joe Bisceglia.

Davidson, originally from Kalamazoo, said the last time he performed solo was six or seven years ago.

“It reminds me of those coffee shop days when I was just playing in front of nobody, hoping somebody could hear me through the din of the latté machine,” he said.

The six Singer Songwriter Competition performers were chosen to compete from about 40 who sent in audition tapes. Also taking the Acorn Theater stage on July 16 were:

Doug Harsch performing “Those Kids Are Alright.” Harsch is a South Bend-based troubadour has been playing a stew of folk, blues, bluegrass and rock that he affectionately calls “Rockin’ Americana Folk” around the Michiana area for the last seven years.

Isabelle Pouya playing piano and singing “Ashes of Dreams.” Pouya is a high school junior from Granger, Indiana, who has been writing songs since she was 6 years old. Her dream is to raise awareness and empower people around the world through her music. She has performed numerous times at the LOGAN Center and Hannah and Friends.

Michael Ching with his well-received original tune “Crush Apples With Me.” Ching is a composer and conductor who also enjoys songwriting and occasionally performing as a singer songwriter. His opera, “SPEED DATING TONIGHT!”, has had over a hundred productions since its 2013 premiere. Ching lives in Ames, Iowa and his daughter, Lucy, just graduated from Michigan State.

Bisceglia pointed out that judges Mark Moore and Frank Sintich are accomplished musicians while Terri Hemmert “probably knows more about music than all of us combined.”

“You forgot to mention I play French horn,” she quipped.

Hemmert has been at WXRT 93.1 FM for over 45 years. Starting as overnight announcer and Public Affairs Director in 1973, Terri became the first female morning drive radio personality in Chicago in 1981. In 2002 she became host of Breakfast with The Beatles, which airs 8 to 10 a.m. on Sundays. She also has taught at Columbia College for more than 40 years.

Moore is a signed Songwriter/Producer for NOMA Music in Los Angeles and studio owner. He is also a sideman/session bass player and currently a member of the touring band for the iconic 60’s group Jay and The Americans. Moore has shared the stage with a who’s who of popular music ranging from Bob Weir (The Grateful Dead) and Kevin Hayes (The Robert Cray Band) to Jimmy Dillon (Bob Dylan, Clarence Clemons, Sting) and Bryan Lubeck.

Sintich has been an Acorn Board member since 2016. He was attracted to The Acorn’s connection to the community and live music and began producing shows before being elected to the board. He has spent over 30 years playing and writing music in bands throughout the Chicago area and Midwest. He studied guitar jazz improvisation at Sherwood Music Conservatory. Frank is currently writing, recording and producing original music for an upcoming Broadway musical.

After each first-round performance the judges gave their assessment to the performers, often getting the audience laughing in the process.

Following Hildebrand’s first-round performance of “Serafina,” Moore said “You probably get up in the morning and before you brush your teeth you’re playing your guitar.”

“If you had your guitar case open on the stage I would have thrown in a $20,” Hemmert added.

After Ching sang the light-hearted “Crush Apples With Me,” Hemmert said “Talk about playing to your base! I don’t know if it would go over so well in Arizona.”

“It reminded me a little bit if Billy Joel and Steve Martin wrote a song together,” added Sintich.

While the judges were deliberating, the Singer Songwriter Competition audience was treated to songs by 2019 winner Priscilla Sabourin and then the reigning (2020) Singer Songwriter champion, Dylan Reed Leavitt.

Bisceglia not only served as master of ceremonies, he was the first performer of the evening. Early on he gave the non-profit Acorn a ringing endorsement – “This is an incredibly unique place … there’s no place like this.”

Once the judges had selected the top three, it was up to the audience (voting via cell phones)

To vote for their favorite following a second song from each finalist.

Wible said he plans to keep supporting the “great event.”

All finalists are considered for future performing opportunities, with he first place winner guaranteed and opening spot for larger act.

Acorn patrons won’t have to wait long to see Harsch perform again – he is scheduled to host an open mic night at the Acorn Theater at 8 p.m. July 22.

For more on upcoming shows, go to acornlive.org.