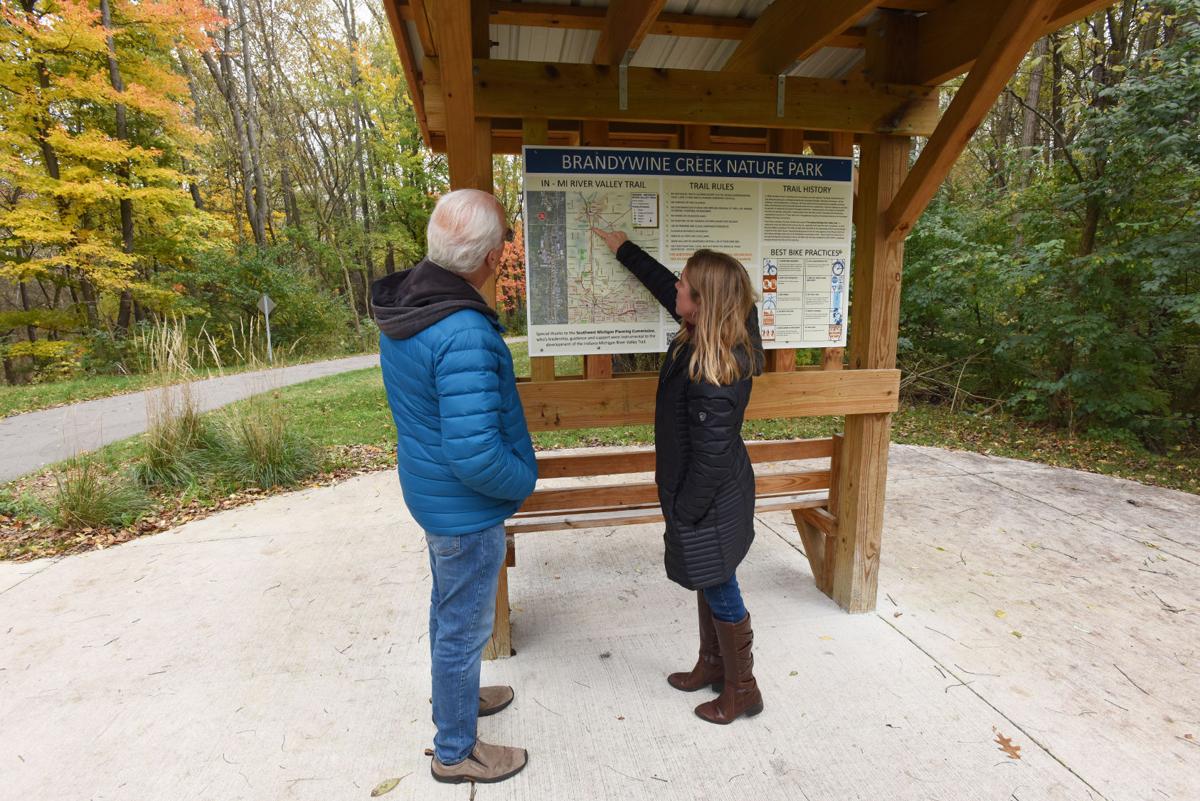 Marcy Hamilton, deputy director/senior planner of the Southwest Michigan Planning Commission, and Gary Wood, president of the Friends of Berrien County Trails, look over a map of the Indiana Michigan River Trail on Tuesday while visiting the Brandywine Creek Nature Preserve in Niles. 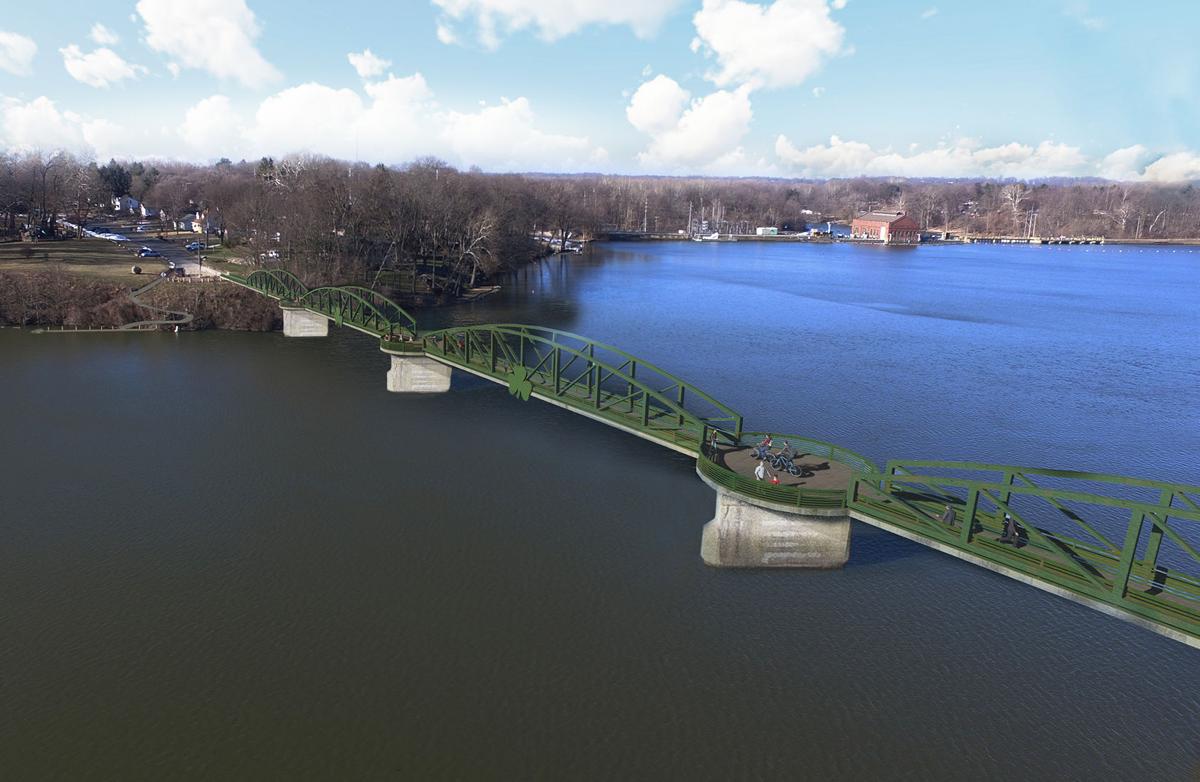 A rendering illustrates a proposed bridge across Lake Chapin in Berrien Springs, which would be built on the existing piers from an old interurban railroad.

Marcy Hamilton, left, deputy director/senior planner of the Southwest Michigan Planning Commission, and Gary Wood, president of the Friends of Berrien County Trails, are working to expand trail systems throughout the county including at the Brandywine Creek Nature Preserve in Niles.

Marcy Hamilton, deputy director/senior planner of the Southwest Michigan Planning Commission, and Gary Wood, president of the Friends of Berrien County Trails, look over a map of the Indiana Michigan River Trail on Tuesday while visiting the Brandywine Creek Nature Preserve in Niles.

A rendering illustrates a proposed bridge across Lake Chapin in Berrien Springs, which would be built on the existing piers from an old interurban railroad.

Imagine being able to safely ride a bike from St. Joseph to Coloma. Or walk or bike, away from traffic, from Union Pier to Warren Dunes State Park.

Imagine crossing a bridge over Lake Chapin to walk or bike from Berrien Springs to St. Joseph.

These are among the visions included in an initiative to connect parks and trails in Berrien County. And nearly half of the county’s municipalities have bought into the plan.

It will take years, but Gary Wood, president of Friends of Berrien County Trails, and Marcy Hamilton, deputy director and senior planner for the Southwest Michigan Planning Commission, are excited about the progress that’s being made toward making the vision a reality.

“We started with a goal of $45,000, but we realized more money would be needed to distribute the plan, provide community engagement and have a robust website,” Wood said. “We’ve raised about $60,000, and any additional funds will just enhance the plan further.”

The $60,000 raised so far is in the form of contributions or pledges from 17 of Berrien County’s 39 municipalities, along with private donations from the Berrien Community Foundation, Whirlpool Corp. and Spectrum Health Lakeland.

“I don’t know of a time in the history of Berrien County where so many local municipalities have come together like this. It’s pretty unique,” Wood said.

He said Friends of Berrien County Trails has begun meeting with Abonmarche representatives on data collection and planning for public engagement, and he expects it will take about a year to develop the plan.

“We want to see where people want to go, identify destinations and population centers, and most of these will eventually be connected in some way,” Wood said. He said the planners will work with individual municipalities to help tie in their own trails.

“Once we have the master plan, we will ask for each community to sign a resolution to support it and incorporate it into their own local plans,” he said. “A key component will be educating the public.”

Wood and Hamilton said the planning process will engage not just local governments, but community groups and citizens. Friends of Berrien County Trails will serve as project manager and fiscal agent for the plan.

The group’s mission is to support the construction and maintenance of pedestrian, bicycle and waterway trails within Berrien County, connect to adjacent counties and encourage trail use.

Hamilton said the Berrien County Trails Master Plan will lay out an overall vision for the county, and there will be collaboration with each municipality to implement the plan, prioritize and invest in projects.

Hamilton said the Michigan Department of Transportation a few years ago began developing a plan for non-motorized paths connecting seven counties in Southwest Michigan, and that plan provided a starting point for the Friends of Berrien County Trails to develop a local master plan.

“This plan will focus on Berrien County. What’s here now and what is wanted in the way of trails, parks, transportation and recreation,” she said.

Wood said there are some wonderful trail connections in the south county, such as the Indiana Michigan River Trail, which eventually will connect to Berrien Springs and, in the long-term, St. Joseph/Benton Harbor. As part of that plan, a bridge is proposed across Lake Chapin, to be built on existing piers that were from the old interurban railroad.

The Red Arrow Linear Park also will be included in the master plan.

A 2019 redevelopment project in Union Pier included putting in a six-foot wide, non-motorized path on Red Arrow Highway from Union Pier Road to Browntown Road. Friends of Berrien County Trails is supporting efforts to continue the linear park pathway south to New Buffalo and north to Bridgman and beyond.

Bunte, an active outdoorsman, said trail connections are important for tourism and attracting younger residents who enjoy biking or walking for recreation or as transportation to work.

And, he said, the state likes community partnerships when it comes to getting grants.

“When a county has the backing of multiple municipalities, the opportunity for funding is greatly enhanced,” Bunte said. “Working in partnership with the county for the betterment of all our communities is something we should all be very supportive of.”

The St. Joseph City Commission has pledged a $5,000 payment toward the Berrien County Trails Master Plan.

City Attorney Laurie Schmidt said the city cannot donate taxpayer’s money, and the $5,000 is not a donation, but rather a payment for a service.

Mike Garey, mayor of St. Joseph at the time the payment was approved, said, “This is really an exciting proposal. All our communities have a non-motorized trail system in their master plans. This will transform the Berrien County community. I look at this as an investment rather than a cost.”

Trail projects to be included in the master plan are Marquette Greenway, Harbor Country Hike and Bike, and Expanding McCoy Creek Trail.

For detailed information on these, or to get involved with Friends of Berrien County Trails, visit www.berrien trails.org.

"When a county has the backing of multiple municipalities, the opportunity for funding is greatly enhanced." — Dave Bunte, Chikaming Township supervisor

"This will transform the Berrien County community. I look at this as an investment rather than a cost.” — Mike Garey, former St. Joseph mayor