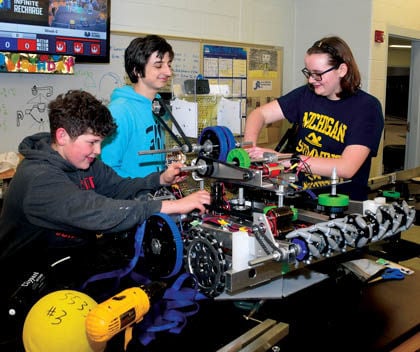 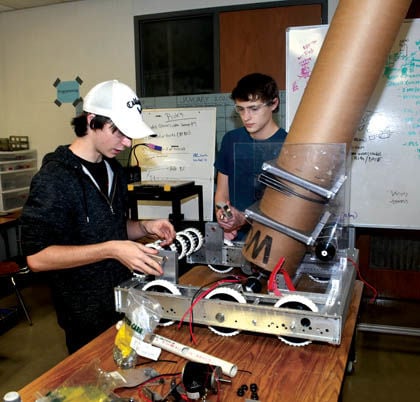 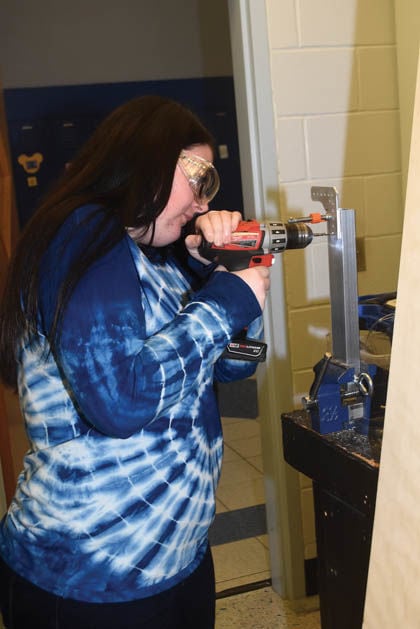 Alyssa Ruszkowski works on a part for the Bionic Bison robot. 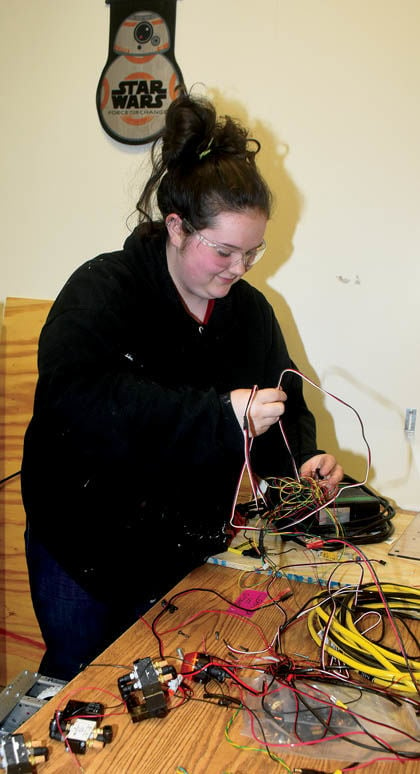 Aubrey Arnold works on electronics for the Gearheads competition robot. 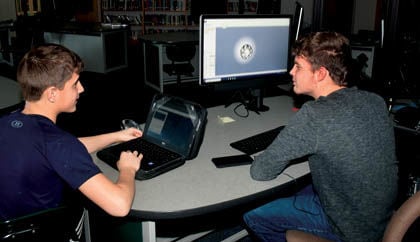 Jack Lantz and Chris Mejia of the Bionic Bison robotics team do some computer work. 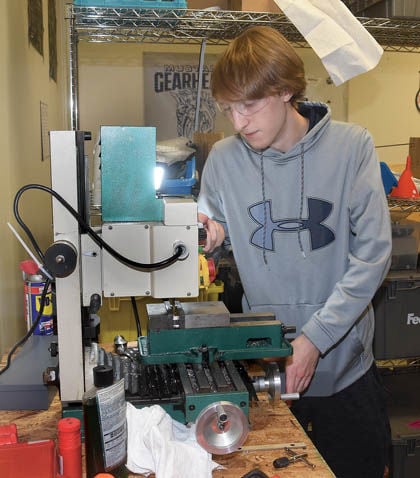 Aidan Olson works on bearings for the Gearheads robot. 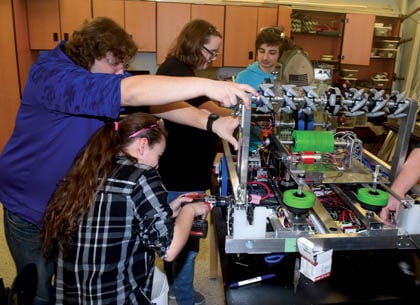 Working on the Bionic Bison competition robot on Saturday, Feb. 22.

Alyssa Ruszkowski works on a part for the Bionic Bison robot.

Aubrey Arnold works on electronics for the Gearheads competition robot.

Jack Lantz and Chris Mejia of the Bionic Bison robotics team do some computer work.

Aidan Olson works on bearings for the Gearheads robot.

Working on the Bionic Bison competition robot on Saturday, Feb. 22.

With two weeks to go until the initial 2020 FIRST INFINITE RECHARGE competition (scheduled for March 5-7 at St. Joseph High School), high school robotics teams from New Buffalo (the Bionic Bison) and River Valley (the Gearheads) are hard at work on their machines.

Members of the 15-member Bionic Bison squad were busy finishing up the assembly of their 2020 robot on Feb. 22.

“At first we were having issues with dead spots in our subsystem that feeds the ball into the feeder itself, which then feeds it into the shooter,” said Junior Ethan Moser, adding that the ball would just spin.

He said they added another part that eliminated the dead spots.

Another challenge was fixing a glitch that had the mechanism firing out two balls at once.

The yellow foam balls in question are considered “Power Cells” in the Star Wars: Force for Change-themed INFINITE RECHARGE game, which focuses on protecting “FIRST City” (a futuristic metropolis modeled after Star Wars) from an impending asteroid impact. Two alliances consisting of three teams each will compete using their robots to perform various tasks, including shooting those Power Cells into high and low goals to activate a Shield Generator, manipulating a Control Panel to activate the shield, and returning to the Shield Generator to park or climb at the end of the match.

He said the team had to trim down the size of their robot since it was a bit over dimensions. But this year’s model is well under the weight limit of 120 pounds (around 80 pounds as of Feb. 22).

“We’ve never had this issue of being really light,” Hauch said.

“It’s really nice because we have a lot of possibilities with what we can do,” added team member Zoe Price.

Hauch said the Bionic Bison robot is designed to fire the power cells about 27 feet into the top goal on the playing field (where more points can be scored — especially if you can hit a smaller sub-opening).

The robot will use a Limelight camera system that “sees the reflective tape” and recognizes it to auto-align for targets (the Limelight system on last year’s model was demonstrated at the Feb. 21 electives fair held at the high school).

“We’ve gotten a lot more done this than we did at the same time last year,” said Jacob Ashcraft (this year’s primary driver and captain for the Gearheads) during a Feb. 21 build session at River Valley High School.

He credited this largely to the presence of two new people on the build side (the four working on Feb. 21 were Ashcraft, Josh Kidder, Cody Kidder and Aiden Olson).

“It’s still slow going, but we are pushing through and I think we’re going to do pretty well at our first comp this year.”

As of Feb. 21 the Gearheds were finishing up intake system for power cells and the shooting mechanism (based on one from a past Gearheads robot).

Aubrey Arnold and Raven Sanford are in charge of assembling the electronics portion of the robot and doing the coding.

Arnold was putting together the electronics panel for the bot on Feb. 21.

She said the coding part includes setting (and adjusting) the speed that power cell balls shoot out of the tube.