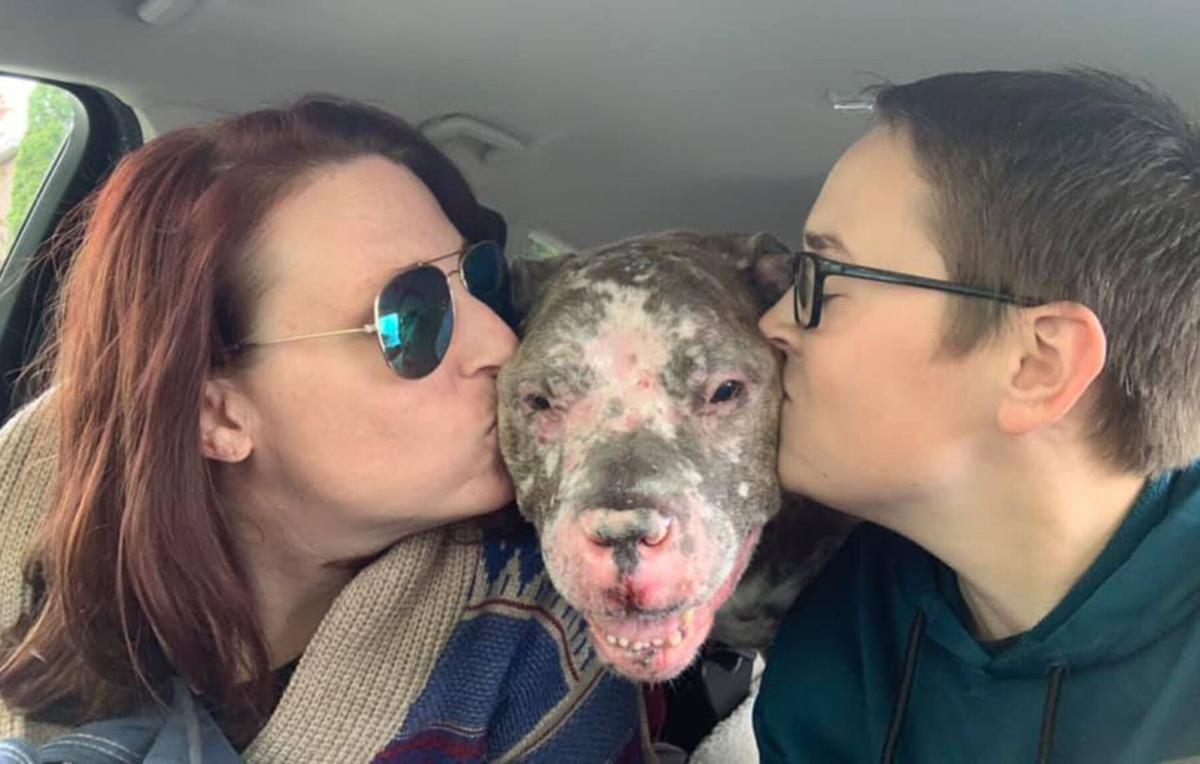 Jen, left, and Jordan Chapman adopted Marley, a terminally ill pit bull, in February, and the dog became a social media sensation while checking off items on his “bucket list.” 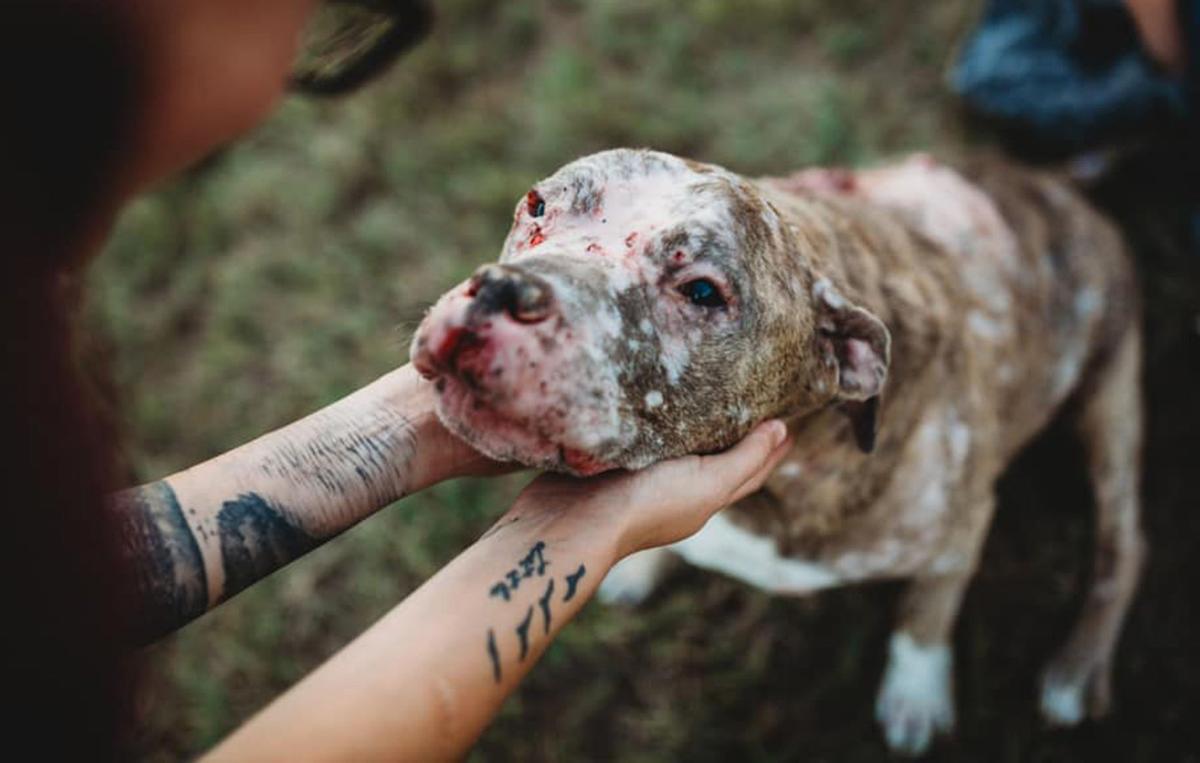 Marley suffered from a type of lymphoma that caused sore and lesions all over his skin. It was the painful lesions and arthritis that convinced the couple to have him put down earlier this month.

Jen, left, and Jordan Chapman adopted Marley, a terminally ill pit bull, in February, and the dog became a social media sensation while checking off items on his “bucket list.”

Marley suffered from a type of lymphoma that caused sore and lesions all over his skin. It was the painful lesions and arthritis that convinced the couple to have him put down earlier this month.

KANKAKEE, Illinois — Jordan Chapman calls putting down a cancer-stricken dog found roaming the streets of Michigan City one of the hardest things she and her partner have ever had to do.

And something they’d gladly do again.

“Ultimately, we made the decision to say goodbye to Marley when we did, mainly because of his arthritis and his sores,” the Kankakee, Illinois, resident said.

“He was really sore going up and down just a few steps. He was getting a bath literally every night to keep his wounds clean; was on an antibiotic daily; and the sores were just getting so much worse.”

She said while the pit bull was “by no means miserable,” she and Jen Chapman “decided when we adopted him that we wanted him to be feeling at least OK when it was time.

“We didn’t ever want to draw things out for our sake, we wanted to let him go for him, if that makes sense,” Jordan said.

It was tough on them, and on the thousands of people who followed Marley on social media, including the Facebook page Marley Smiles.

The dog was brought to the Michiana Humane Society in Michigan City around New Year’s 2020 after being found running stray, according to shelter executive director Johanna Humbert.

They knew immediately something was wrong, as the dog was covered in sores and scabby lesions.

At the Michigan City Animal Hospital, a veterinarian suspected skin cancer, a diagnosis which tissue biopsies proved correct – a type of lymphoma and only about six months to live.

So shelter staff, hoping to find him a home for those final months, started posting photos on Facebook.

That’s where he came to the attention of the Chapmans – Jordan, who runs an animal shelter; and Jen, a massage therapist at a hospice – who has fostered a number of sick dogs.

They adopted him in early February, and quickly found he was different. Marley had attracted a small following on social media, which grew and grew after his new family started a “bucket list” on Instagram and Facebook.

It was a series of things they wanted Marley to experience – from visiting Wrigley Field, Starbucks and government offices; to riding in a fire truck, walking on a beach and trying a hamburger.

And between regular trips to the vet and chemotherapy sessions, they got most everything on the list done.

“Really the only things he didn’t check off were being a police dog for the day, which we had scheduled but COVID kind of swooped in,” Jordan Chapman said.

“He didn’t ride on a boat either, but that was a tough one we’re glad we didn’t try. ... people offered their boats, but he couldn’t be in the heat or sun long with his sores, so that was a good one to skip.”

Marley also didn’t get to meet anyone truly famous, she said, “but I think there’s some irony ... because now that we’ve gone through this whole experience, I’ve realized he was the famous one.

“We were all just lucky enough to be the parents of a famous dog.”

One of Marley’s biggest fans was Mandy Krickhahn, co-founder of The Collective, a group of entrepreneurs/philanthropists who stage Artisan Markets and donate a percentage of proceeds to charity.

“I started following Marley’s story on social media as soon as he arrived at Michiana Humane Society,” she said. “He came in as a senior stray in rough shape with a lot of medical issues, but you couldn’t help but fall in love with him.”

A dog-lover herself, Krickhahn knew MHS had a “tall order of looking for a hospice home for an elderly, terminally ill dog” but she said the Chapmans provided “the perfect home with their family to spend his remaining time.

“Not only did they take him in and care for him, they came up with the bucket list ... I loved following along and watching them check things off.”

So The Collective got involved.

“My friends Nikki and Chris Reisetter – who are also volunteers at MHS and fell in love with Marley during his time there – spearheaded a fundraiser for MHS in Marley’s name.”

The Collective, MHS, Burn ‘Em Brewing and Zorn Brewing teamed up and, “Part of the fundraiser included brewing a specialty hop-free, alcohol-free dog beer with 100 percent of proceeds being donated to MHS,” Krickhahn said.

“I was lucky enough to be invited to help brew at Zorn, which was so much fun, but the highlight of the day was Marley and his moms coming to help.

“Word got out that Marley would be making an appearance and it was a packed house with people coming from all over Indiana, Illinois and Michigan just to meet him. When he walked into the restaurant, there were cheers, clapping and even a few tears from everyone who came out to meet him.”

There were more tears in early September, as fans and the Chapmans understandably took Marley’s passing hard.

“We were pretty upset the day of, as expected,” Jordan said. “Explaining things to our son was hard, because at 4, you just don’t understand why your dog is gone all of the sudden.

“Alexander says every day that he’s thankful for Marley and that he loves and misses him – he asks if we can go pick him up from Heaven – but he also understands Marley is not hurting or painful, so he gets it in his own way.”

And as for doing it again.

“Not a single ounce of us regrets adopting that big dude,” Jordan said. “He was the best dog either of us has ever met – better than our current 4, no offense to them.

“He came into our house and just was home. He clicked with us and meshed like he was ours since he was a puppy.

“Jen and I joke with each other, saying, ‘We are never doing this again,’ but we’ll look at each other and laugh and say, ‘Yeah, right,’ because we know we will.”

She said adopting terminally ill pit bulls has become “something of a niche market, but we’ve found that it’s our thing.

“Once we’ve had some time, I think another dog like Marley will find their way to us, be it through Facebook or shelter friends, and we’ll know that we’re right for them.”

They plan to “carry on Marley’s smile forever through future adoptions, and he will tell the stories of the next senior and terminal dog that we adopt.”

Humbert said she and the MHS staff will never forget.

“We are forever grateful to Jordan and Jen for seeing past Marley’s cancer to find the cheerful, loving boy inside. The life experiences they gave him for his final months brightened a dark time for thousands.

“They are an inspiration to us all.”

“To see a dog, who probably didn’t have the best life before he turned up at MHS, become a regional celebrity who brought people together, was absolutely amazing.”

She calls it one of the best things about 2020.

“Meeting Marley and his moms was definitely one of the highlights of this crazy year. The love and care they showed him; the patience MHS had finding him the perfect home; local small businesses and our community coming together to give back, is exactly what we need in the world right now.

“Marley may have crossed the rainbow bridge, but he will not be forgotten. He will remain a constant reminder to us that it is never too late to live your best life.”