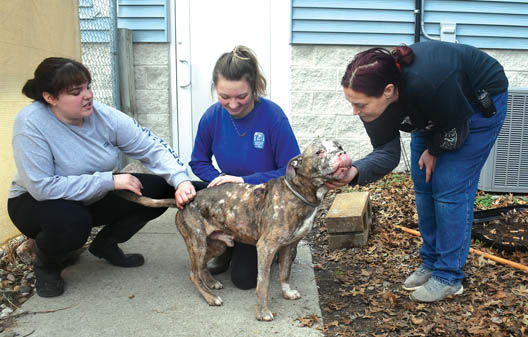 Angelina Diaz, Alexis Dickey and Renee Horn with "Marley" during a Jan. 31 excursion outside at the Michiana Humane Society shelter. Less than a week later he had found a new home. - photos by David Johnson 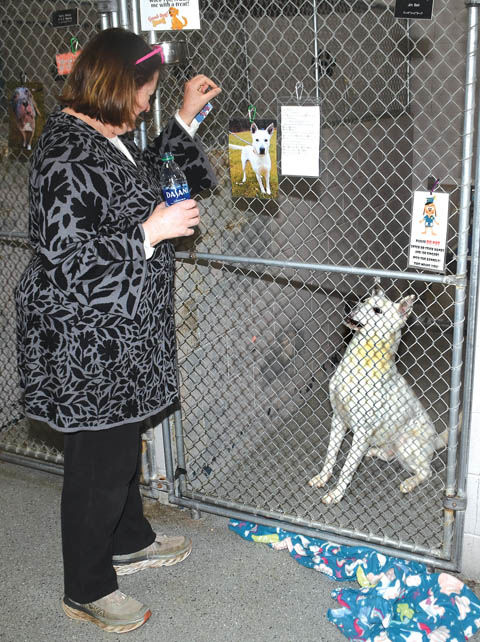 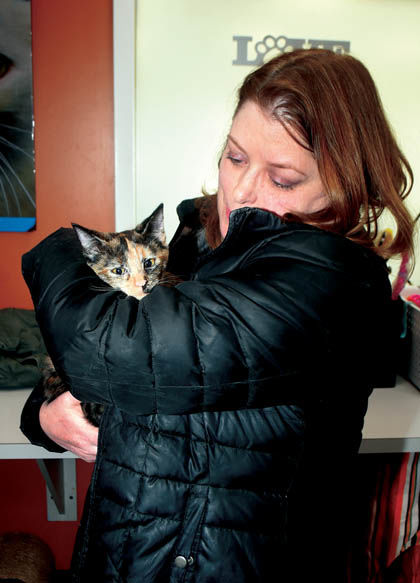 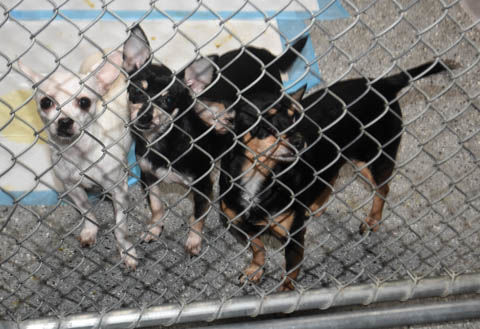 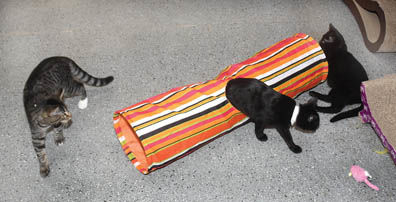 Angelina Diaz, Alexis Dickey and Renee Horn with "Marley" during a Jan. 31 excursion outside at the Michiana Humane Society shelter. Less than a week later he had found a new home. - photos by David Johnson

MICHIGAN CITY, Ind. — A century-old tradition of caring for animals in need of a good home is being celebrated this year by the Michiana Humane Society.

“We’re celebrating 100 years of second chances,” Humbert said. “We have a lot of things planned, We’re going to have a big birthday party in June as a community event to invite people who maybe haven’t stopped by lately. Spring Fling in April is going to kick off the celebration. We’re looking at changing our logo. Grand Cottage is going to be particularly special this year.”

She said the group that became the Michiana Humane Society was first organized in 1920.

“The legend is the police chief told his officers there were too many stray dogs on the street. If you see a stray dog I want you to shoot them.”

Humbert said a group of citizens came together to stand up for the dogs and find other ways to get them off the streets.

She said as the century went on improvements in disease and pest control along with the invention of kitty litter by Ed Lowe of Cassopolis helped increase the number of household pets in America.

Humbert said the current Michiana Humane Society Shelter facility, built in 1997, replaced a building on Karwick Avenue that seems primitive by today’s standards, with dog kennels located in the basement.

“In the 22 years that we’ve been there we’ve placed over 10,000 animals into loving families in the community,” she said.

Among the ways the Michiana Humane Society places animals into good homes include: Expanding hours at the Shelter to Sundays beginning in the fall of 2019 (the facility is now open 7 days a week starting at 11 a.m. Central Time); A $25 adoption fee for adult cats; the new Fetch Some Fun program where people can spend time outside of the shelter with adoptable dogs who are good on leash any day of the week; a soon-to-be introduced Fetch Some Feline Fun option (which will take place inside the shelter).

Humbert added that Fetch Some Fun participants fill out a “report card” on their canine companions that give them increased insight on the dogs at the shelter. Fetch Some Fun photos posted on social media also raise awareness of the animals and extend the Humane Society’s reach into the community.

About 50 percent of the animals brought in 20-plus years ago were euthanized and there was little in the way of available medical attention.

Now there is a full-time veterinary assistant (Susan Donovan) at the shelter and every animal gets a full exam upon arrival, with those needing further attention being seen by a veterinarian.

Over the past two years Humbert said a grant from the Barker Welfare Foundation made it possible to build three 20-by-30 foot outdoor play areas for dogs where they can “play like dogs.”

A spacious cat room filled with climbing stations and toys (and often staffed by volunteers including Carl Anderson, who “knows every single cat”) gives visitors a great place to meet the felines.

“Our cats want to be your friend, and that’s the kind of cat you want to adopt,” she said.

Humbert noted that other volunteers take dogs outside for exercise and socialization most afternoons.

She said there are 17 staff members at the shelter (10 full-time).

Humbert said the Humane Society makes a special effort to place appropriate pets with seniors who are home alone.

“There are plenty of cats and dogs that make perfect pets for seniors,” she noted.

Humbert said the Humane Society Shelter’s 23 dog kennels (some currently occupied by multiple canines due to a small-dog hoarding situation the Humane Society recently helped out with) are all full. There also are about 70 cats as well as some rabbits and guinea pigs looking for homes (there are currently about 30 dogs on a waiting list to be surrendered into the shelter and cats are turned away every day due to room constraints).

On Friday, Jan. 31, some of the dogs and cats at the shelter were introduced to potential owners.

Among these was “Marley” — a gentle older pit bull mix and former stray with some health issues who got to explore the great outdoors for a while.

On Feb. 6 the Michiana Michiana Humane Society reported that Marley had been "adopted ‪by Jordan and Jen."‬

‪"They are committed to giving him the best life for whatever time he has left and even have a bucket list made for him.‬"

According to a post on the Society's Facebook page, Marley was given about 6 months to live due to skin cancer.

"Thanks to all of you who shared his posts, amazing adopters like Jen and Jordan saw him. He is now living out his #secondchance."

Marley's story can be followed on the Marleysmiles Facebook page).

Humbert said a three-legged dog named “Milo” also recently went home with his new family. The 10-year-old canine came to the shelter after being home alone for a while after his owner passed away.

Also meeting with people in the shelter on Jan. 31 were an energetic young adult named “Max” and a big guy named “Major.”

A stray female had a litter of puppies at a foster home just before Christmas, and Humbert said by mid-February they will be available.

Photos and descriptions of adoptable dog, cats and other animals can ve viewed at michianahumanesociety.org.

“We love them all, every animal that comes to us,” Humbert said. “We do our very best to take good care of them and our track record is really great now.”