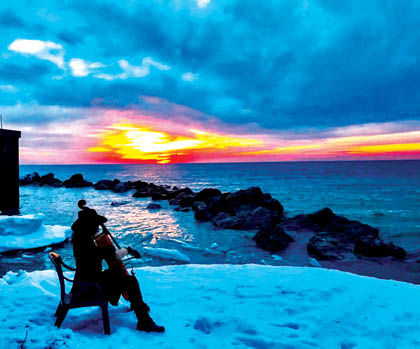 In this wintertime photo by Joel Brussell, Melissa Dittman plays her cello by a series of boulders protecting lakefront properties in Michiana Shores. 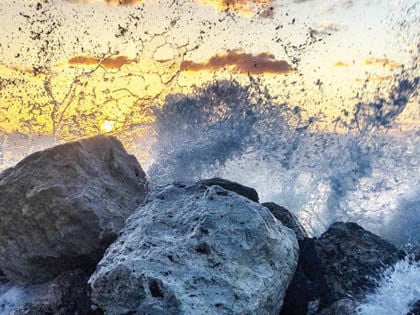 One of the many photos Brussell has taken of the sunset, this time through the waves crashing against the rocks. 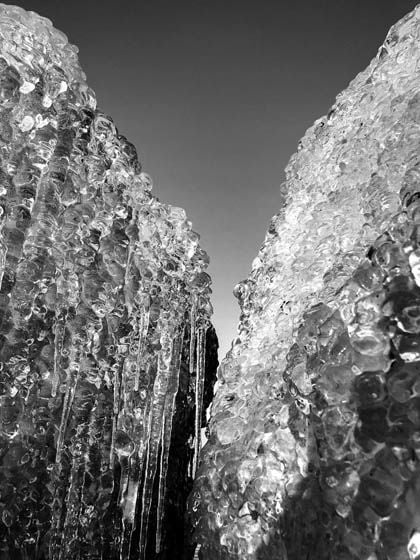 A study of ice formations at the lakeshore. 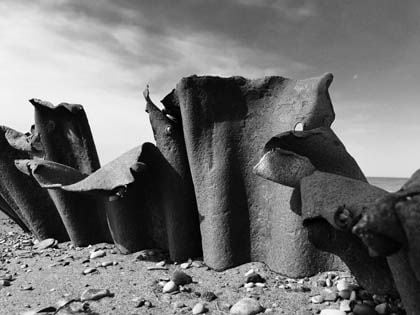 Photographic evidence of a battle.

In this wintertime photo by Joel Brussell, Melissa Dittman plays her cello by a series of boulders protecting lakefront properties in Michiana Shores.

One of the many photos Brussell has taken of the sunset, this time through the waves crashing against the rocks.

A study of ice formations at the lakeshore.

Photographic evidence of a battle.

There are slabs of cement, worn and blasted by the waves; remnants of iron sea­walls, torn apart by the action of wind and wa­ter; but most­ly there are the boulders and stones, part of a con­tingent of battlements put out years ago to protect lakefront homes from encroaching nature.

Brussell said it reminds him a bit of the ruined battlements of Normandy Beach, where the U.S. launched the largest amphibious invasion in histo­ry during World War II.

And it’s something he’s been cataloging for about a year in photos. At first, he said, he was just interested in photographing the ice for­mations on the boulders near Stop 42 in Michiana, but then things changed.

“I began to notice when it warmed up they (the boul­ders) were a good kind of background or framing for the sunset,” he said, “and spe­cifi cally, I had an idea to do the sunset through the splash­es of water above them.”

Brussell, whose work has been shown at the Lubeznik Center for the Arts, the Box Factory, Fernwood Botanical Gardens, and the A+C Archi­tects Gallery in Skokie, Illi­nois, said he’s since become obsessed with capturing the look of boulders and seawalls and other defenses as they change with the seasons. Now they’re part of the gal­lery of work – Songs of Ero­sion and Savage Sunsets – in his latest shows. He wants others to see what he sees in the uniqueness of the land­scape created by this strug­gle.

“I think that it’s an unnatu­ral accident that sort of creat­ed a kind of, to me, cool land­scape,” he said. “Because in one sense you have complete nature and rugged nature, and then in another sense you’ve got people fighting that na­ture, with boulders and sea­walls and whatever they’re doing, and maybe between the two of those things, it’s created something else. Again I say stumbled be­cause I didn’t necessarily set out to do this.”

He said a lot of people didn’t notice or appreciate how different the boulders look at different times of the year. Photographing them be­came more about capturing moods or personalities, or different universes.

“I just was intrigued with the boulders and at first the prehistoric-like feel they had when covered in ice,” he said.

“The winter feels timeless, but spring and summer are a bit more like a painted dramatic landscape. ... I was intrigued with the sunsets around them as seen through a splash. It took time to set in that this was the same set of boulders.”

But there was more for Brussell.

When he posted some of this work online, people started commenting about how the landscapes could be from a million years ago, “as opposed to down the street at your beach this afternoon,” he said.

“And in fact, people have said, when they see the pictures, ‘Oh, is that Maine?’ ‘The East Coast?’ And I go, ‘No, that’s Lake Michigan.’ Because you don’t generally see big boulders, you don’t see rock formations in Lake Michigan.

“It looks like a sort of rugged East Coast coastline. Or West Coast. You know, we live in the Midwest, which of course is flat, and Lake Michigan doesn’t have a rocky coastline, so this is kind of an artificial creation of that.”

He also started juxtaposing the primordial-looking landscapes with people, namely cellist Melissa Dittman, to emphasize some of the “softness” he sees. “Maybe [this is about] opening eyes to the beauty of something they wouldn’t naturally think of,” he said. “I’m a firm believer in accidents rather than intentions. And this was an accident.”