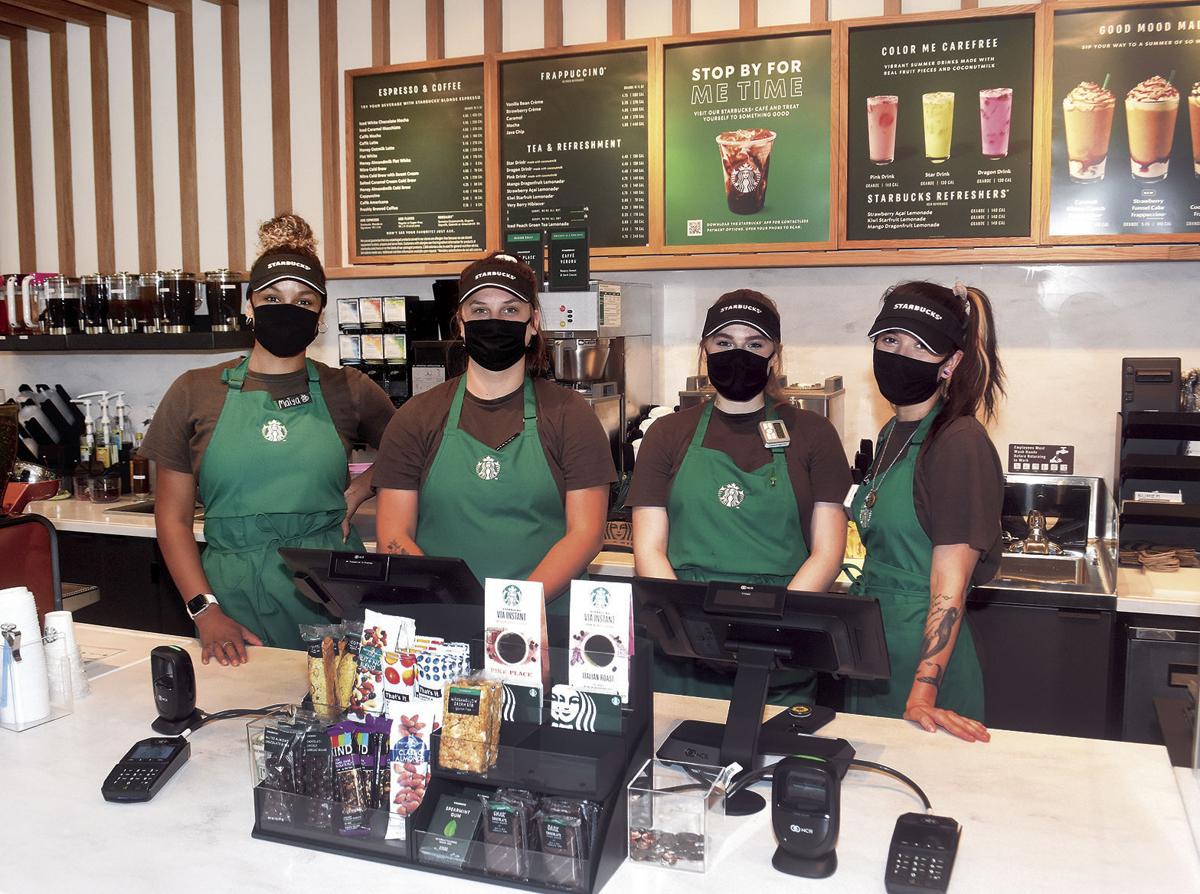 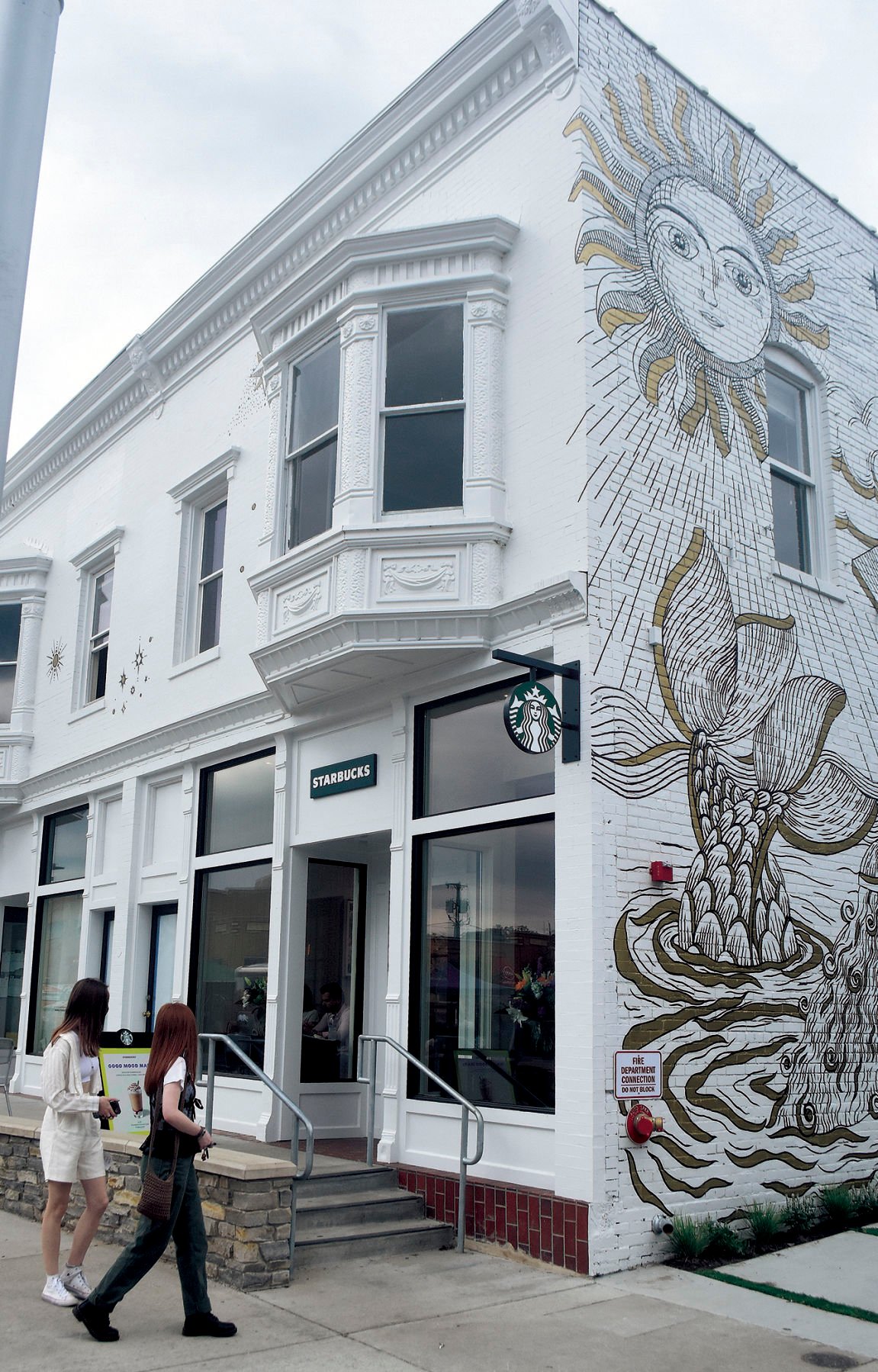 An exterior view of the downtown New Buffalo Starbucks in the Michigan Mercantile Building. 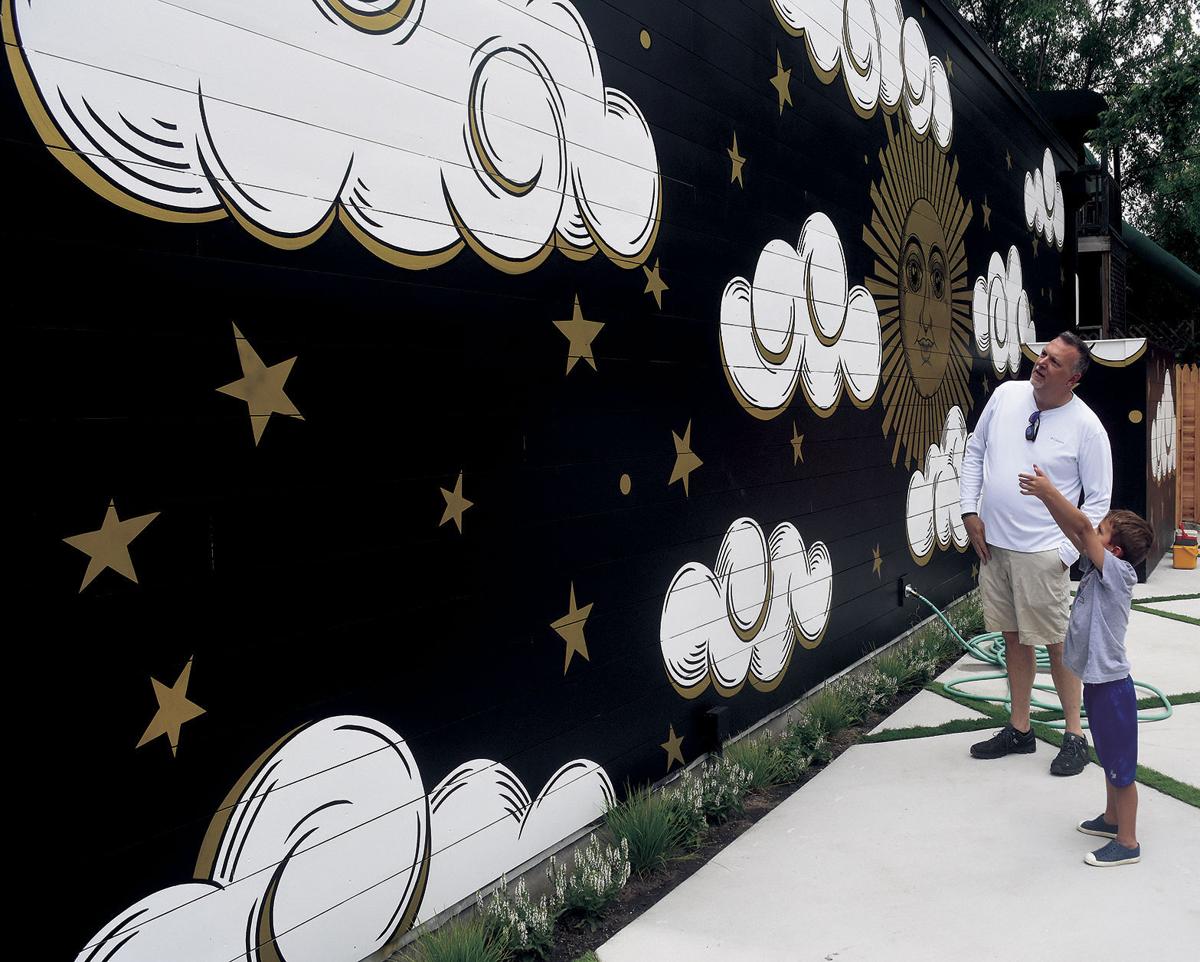 ABOVE: John and Luke Grady admire the mural in the courtyard located between the new Starbucks and the Mick Klug Farm market in New Buffalo. 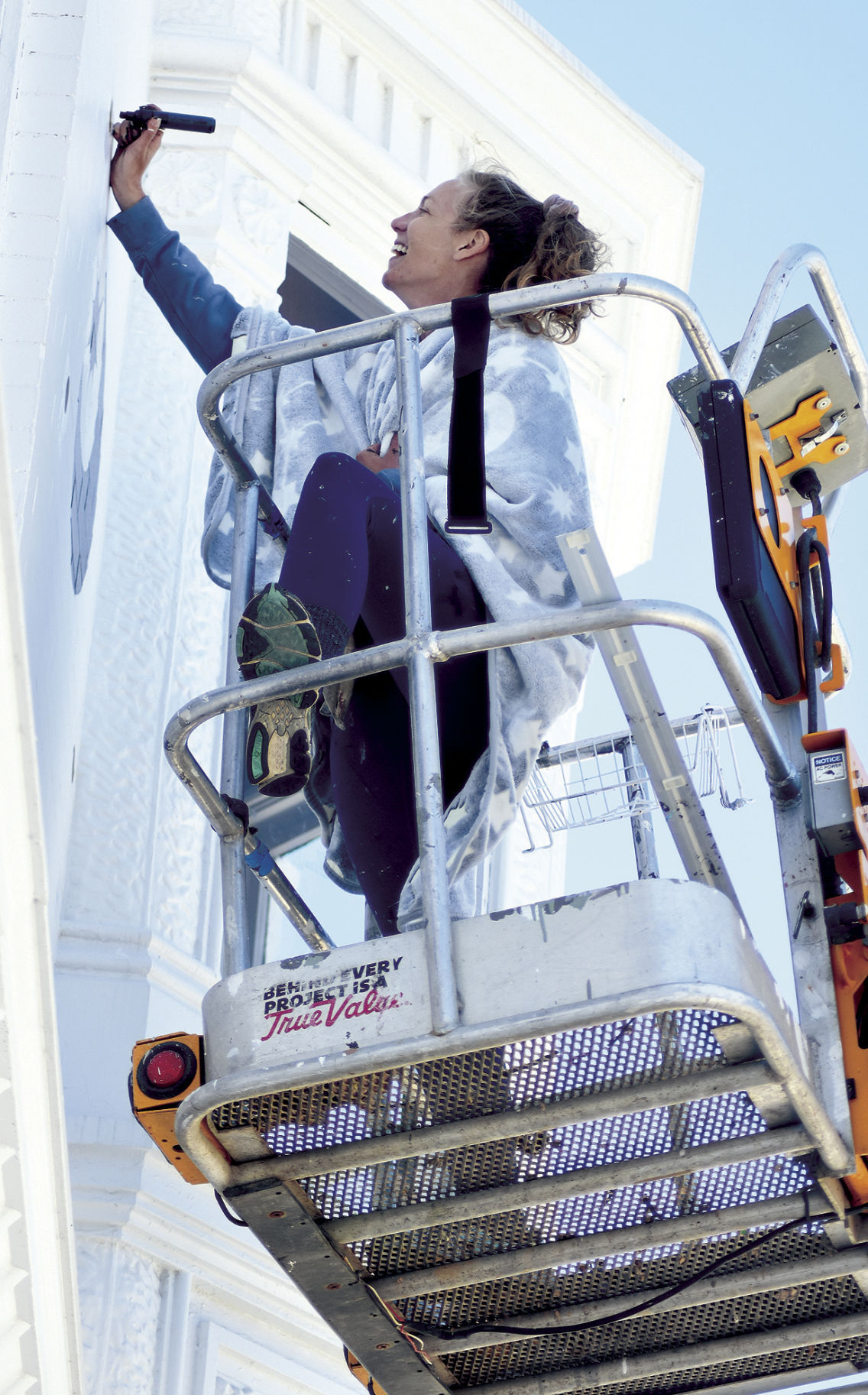 Kate Lewis puts the finishing touches on the mural that covers three sides of the Michigan Mercantile Building in downtown New Buffalo.

An exterior view of the downtown New Buffalo Starbucks in the Michigan Mercantile Building.

ABOVE: John and Luke Grady admire the mural in the courtyard located between the new Starbucks and the Mick Klug Farm market in New Buffalo.

Kate Lewis puts the finishing touches on the mural that covers three sides of the Michigan Mercantile Building in downtown New Buffalo.

NEW BUFFALO — Visitors to downtown New Buffalo have been buzzing about the new Starbucks at 116 N. Whittaker St. since it opened on June 23, with passersby stopping to take cell phone photos and heading in to be among the first customers.

“We had been talking to Starbucks about coming here since 2011,” said Leslie Danesi, who with her husband, Marc, owns the Michigan Mercantile Building where the new venture is located.

“We’ve got a great staff working with us. A couple of the managers have been managers at The Stray Dog and worked for us for a number of years. And we’ve been lucky enough to hire some great partners that are the baristas,” she said.

Leslie Danesi said the plan is to eventually expand the hours to 10 p.m., noting that their Stray Dog restaurant and store are open later in the evening to give visitors more after-hours options.

“I think a lot of people are walking around trying to figure out what they’d like to do after they had dinner,” she said.

Leslie said they previously had city approval for a Starbucks location up the street, but a fire at their Stray Dog restaurant and other issues took precedence at the time.

Danesi said being able to attract a retailer like Starbucks creates an excitement about New Buffalo that she thinks will bring other good things to town.

Leslie said she and her husband had the opportunity to buy the Michigan Mercantile Building last year (Starbucks is located in the lower right space).

“We knew that one of the things we wanted to do was position it as a multi-use kind of development,” she said. “It’s a development that we’ve thought about for a long time. We’ve lived here for over 30 years (and have had different restaurants in town beginning with Dakota’s).”

Danesi said they have always tried to provide full-time, year-round employment for their workers, adding that they paid their employees during the pandemic (they were closed for two months in the spring of 2020) and didn’t let anybody go.

“We’re always here for our customers and for the town,” she said.

Also new is the Mick Klug Farm Market (located in a separate building behind Starbuck’s).

“Every morning when you come to get your coffee, you can get your fresh strawberries or your peas or whatever is in season,” Danesi said.

Starbucks and the farm market are separated by a spacious courtyard adorned with the same Kate Lewis mural art that covers the side and front of the Michigan Mercantile building.

Danesi said there will be cafe tables throughout the courtyard between Starbucks and the Mick Klug Farm market. A public bathroom also will be located there.

“Anybody’s welcome to come here,” she said. “You can enjoy your produce, your coffee, your paper, whatever you like … it’s really a meeting place for the town and for the people who are visiting.”

Mick Klug Farm (committed to sustainable agriculture and MAEAP Environmentally verified) grows many varieties of fruits and vegetables, employing approximately 25 employees seasonally. We have provided fresh produce to the Green City Market for over 15 years and to City of Chicago Farmers Markets for over 30 years

Leslie Danesi said a shop offering resort clothing and other items is expected to open in one of the Michigan Mercantile Building’s North Whittaker Street storefronts later in July.

“When we’re fully finished, probably in the fall, we’ll have three different retail stores in the front, one of them being Starbucks, and Mick Klug Farm should be open year-round,” she said.