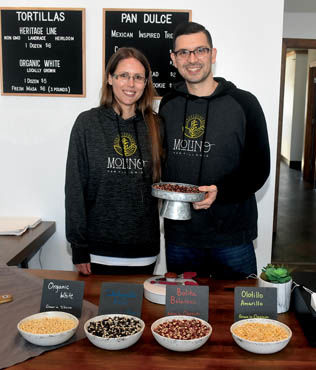 Aaron and Christie Harris inside the new Molino Tortilleria in Sawyer on Saturday, Feb. 29. 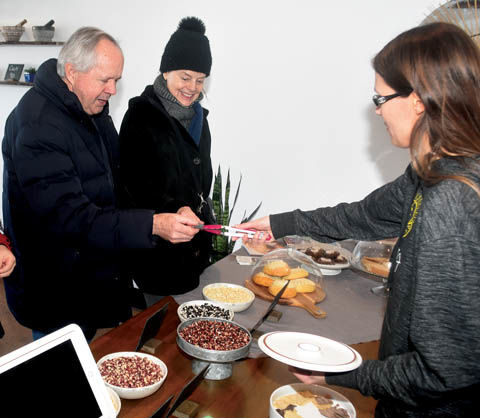 Mike and Geri Himes get a tortilla sample from Christie Harris inside the new Molino Tortilleria in Sawyer.

Aaron and Christie Harris inside the new Molino Tortilleria in Sawyer on Saturday, Feb. 29.

Mike and Geri Himes get a tortilla sample from Christie Harris inside the new Molino Tortilleria in Sawyer.

SAWYER — Aaron and Christie Harris set out several years ago to make a better tortilla for their tacos.

“We were doing this all out of our home kitchen (in Stevensville),” he noted.

The former Chicagoans (they moved to Michigan four years ago) “were just trying to make a really good taco” that would be gluten-free and were disappointed with the corn tortillas available at most stores.

“So we decided to make our own,” Arron said, adding that they started with corn flour before learning how to make tortillas from scratch using different varieties of corn (varieties of Mexican heritage corn are featured in many recipes).

As their recipes improved, they began sharing information on their homemade tortillas via social media, and that sparked enough interest to begins selling them at the Farmers Market.

“From there it kind of took off and took on a life of its own,” he said.

The opportunity to make and sell their tortillas (and several varieties of pan dulce) at a spacious space in Sawyer came up in 2019, and Aaron said they knew it was the right place to be.

The Molino Tortilleria began to take shape last November, and opened on Feb. 15 (current retail hours are 10 a.m. to 4 p.m. on Saturdays).

The family processes dried corn for tortillas (the Mexican heritage types arrive dried and sorted by variety) by cooking the kernels, then soaking them overnight in powdered lime minerals. After that, the kernels are ground by hand using two volcanic rocks, then mixed with water (to make masa) and cooked to create the tortillas.

“They’re fully cooked … you just re-heat them when you get home,” Aaron said.

Molino Tortilleria is located at 5846 Sawyer Road (next-door to Infusco Coffee Roasters). You can peruse their offerings online at www.molinotortillas.com.