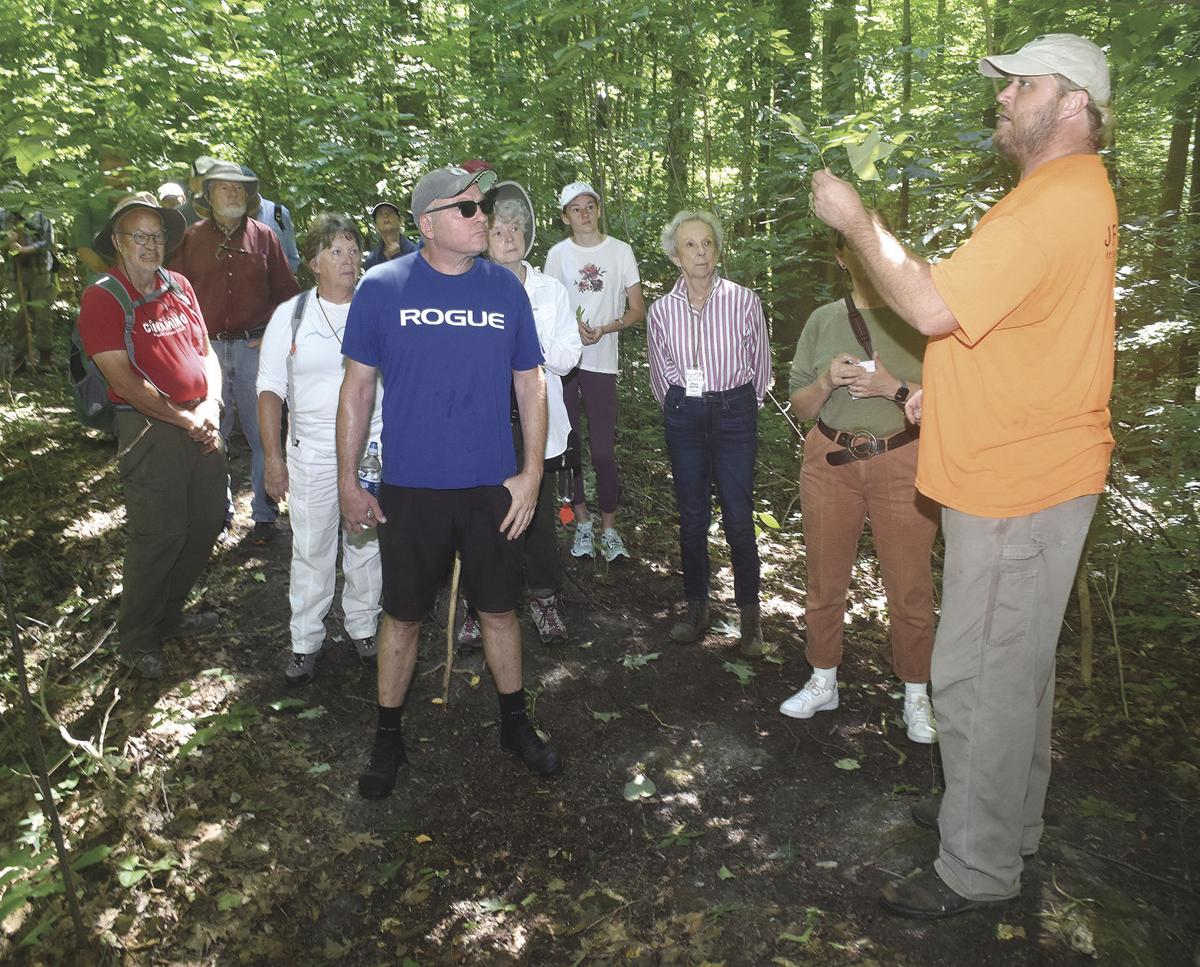 Chikaming Open Lands Executive Director Ryan Postema (right) talks about the trees in the forest during a hike through the Merritt and Younger preserves. 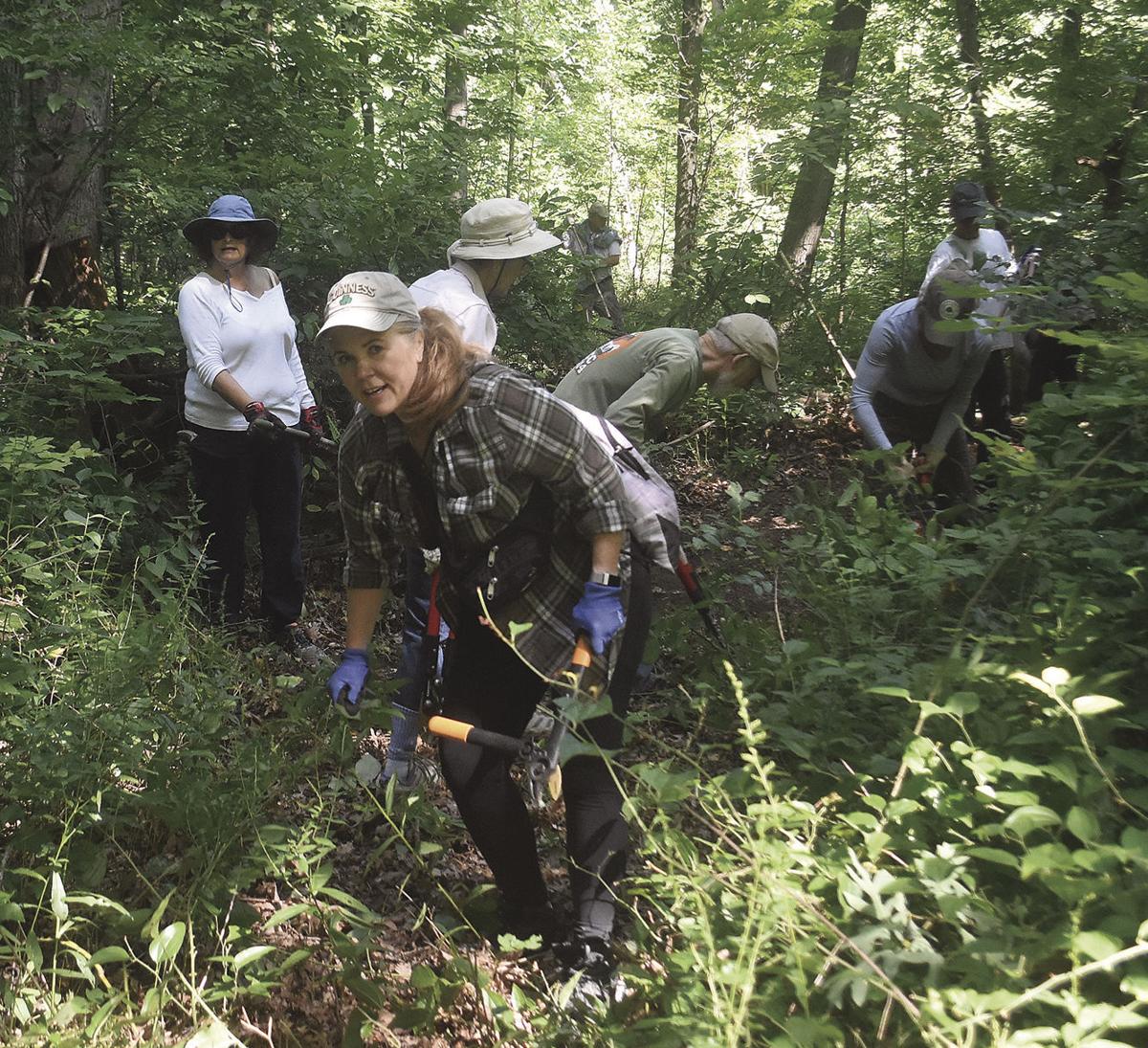 Clearing a new trail through the Flynn Woods Preserve on Aug. 1. 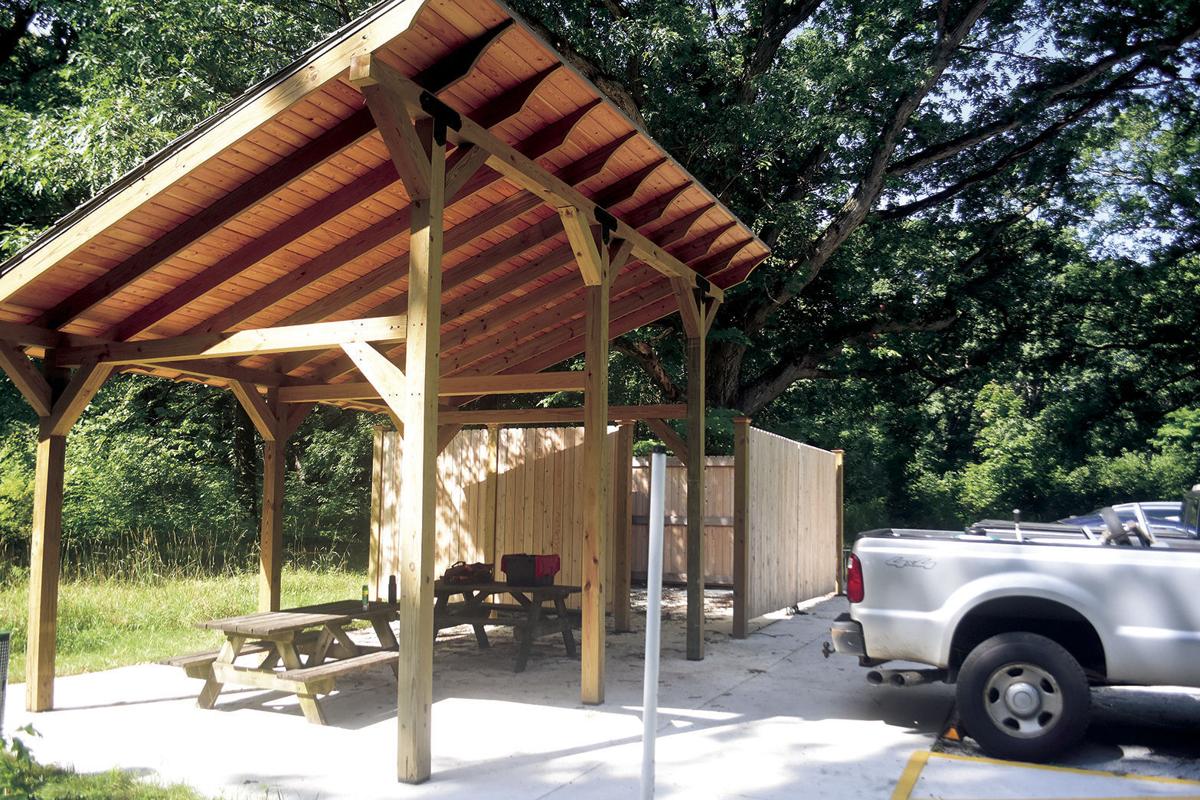 Chikaming Open Lands Executive Director Ryan Postema (right) talks about the trees in the forest during a hike through the Merritt and Younger preserves.

Clearing a new trail through the Flynn Woods Preserve on Aug. 1.

The two Chikaming Open Lands (COL) preserves protect 60 acres of forest and wetland consisting of two contiguous preserves stretching from Mydra Road (the entrance is located near the end of that street north of Elm Valley Road) to East Road.

“The Merritt Family Preserve was donated to us by Meryle Merritt (in memory of Lawrence H. Merritt),” he said, adding that the family used the site as a retreat and recreation area.

Postema said the Younger family also didn’t want to see their family property developed, and that land was purchased by COL from Joan Younger Stevian for “a reduced price.”

The hiking trail that passes through both preserves begins as the remnants of a driveway on the Merritt property while the Younger parcels has some old logging roads on it.

Before setting out to explore the 60 acres encompassed by the connected preserves (35 of them in the Merritt parcel and 25 in the Younger area), Postema talked about the different stages of forest succession represented along the trail and how planting efforts on all COL properties are being adjusted to take climate change into account.

He said the two preserves are home to forests in different stages of succession.

“The Merritt Family is a younger forest is an earlier stage of succession, so we’ll see a lot of smaller young maples, not a lot of beech. There’s also cherry and sassafras,” he said. “Then and we move further west and get into the Younger property we’ll have a more mature forest.”

Postema said the Merritt site was farmed until the 1980s while the Younger parcel was abandoned by farmers about 40 years earlier.

Postema said most “climax” mature forests in this area are beech-maple woodlands (such as the nearby Warren Woods).

He said COL is working with partners such as the Southwest Michigan Land Conservancy and the Michigan Nature Conservancy with funding from a grant for a climate adaptation project that includes reforestation in some of the land conservancy’s local properties such as the Younger Preserve, the Chris Thompson Memorial Preserve on Warren Woods Road, and the Edward & Elizabeth Leonard Wildlife Preserve on Lakeside Road.

“We’re planting tree seedlings that are native to the area, but we’re at the northern edge of their range,” he said, noting that most climate models show this area becoming similar to areas further south in the coming years. Those tree species include paw paw, hickory, sycamore, and some types of oaks.

“Fifty years from now they’ll be full-grown mature trees and we hope that they’ll have adapted to any changes that have happened.”

Right across Mydra Road (and a large ravine) from the Merritt and Younger properties is the border of the Chikaming Park & Preserve.

Postema said a trail allowing visitors to the Merritt and Younger Preserves to explore the township park may be developed in the future.

For complete details or information on Harbor Country Hikers membership, volunteering and

Earlier on Aug. 1, a group of volunteers and Postema cleared a new section of hiking trail at Flynn Woods Preserve along East Road (located across the street from COL’s Robinson Woods Preserve).

COL Stewardship Coordinator Dan Engel said volunteers from a Minneapolis youth group staying at Tower Hill Camp in Sawyer in late July pitched in to do some trail work at Flynn Woods after they had helped out at Harbor Country Mission.

“They installed the first half of the trail, and they did a great job,” he said.

Engel said the new trail connects the upgraded entrance/parking area of Flynn Woods Preserve to the big loop trail, and the creation of another smaller loop is planned for the future.

“Between here and Robinson Wood we’re going to have three to four miles of trails,” he said.

Also new at Flynn Woods is a parking lot, picnic tables, a shelter structure, an outhouse, a bike repair station and a drinking fountain.

Prior to the hike at the Merritt and Younger Preserves, Harbor Country Hikers

President Pat Fisher said the original plan had been to have the volunteer group at the Flynn Preserve (which included Postema on the chainsaw) install trail markers at those properties, but the decals had yet to arrive.

• A Fall Birding Hike from 9 to 11 a.m. Sept. 30 at the Edward and Elizabeth Leonard Wildlife Preserve. Engel will lead a morning of bird watching for resident and migrant birds on the preserve (bring your own binoculars). Space is limited, RSVP by contacting Casey Struecker at cstruecker@chikamingopenlands.org or call (265) 405-1006.

• A Volunteer Stewardship Work Day from 10 a.m. to noon Sept. 11 at Burns Prairie Preserve. The 38 acre preserve located off of Mt. Zion Road in Galien includes restored prairie, woodland, and wetland habitats. Stewardship work will include native seed collection from prairie plants. Anyone is welcome to help. Please let COL know you are coming by contacting Dan Engel at dengel@chikamingopenlands.org.

• A Friday Fall Yoga Series under the covered pavilion at Chikaming Township Park and Preserve is scheduled for 10 to 11 a.m. Sept. 10, 17, and 24. COL has partnered with Chikaming Township Parks and yoga instructor Deirdre Guthrie of Spore Studios for the fall yoga series. Cost is $15 per person per session and registration is required (register with Spore Studios: https://studiobookingsonline.com/sporestudios/classcalendar). Please bring a yoga mat and water bottle.