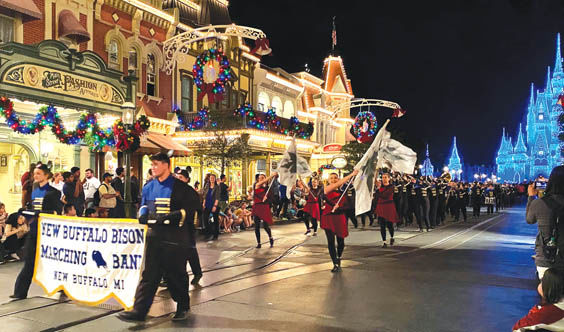 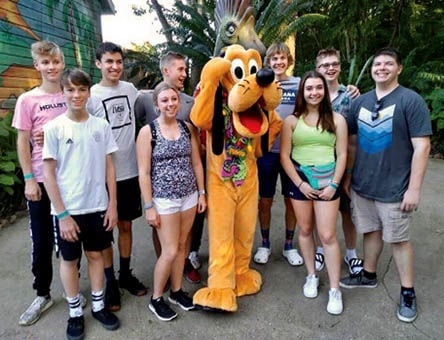 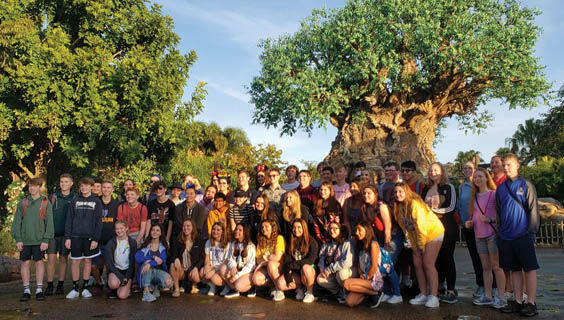 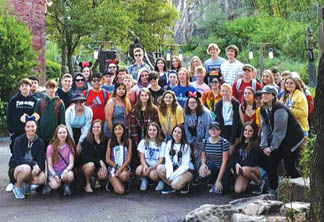 Another group photo opportunity in the Magic Kingdom.

Another group photo opportunity in the Magic Kingdom.

ORLANDO, Fla. — The New Buffalo Band had a lot to be thankful for this Thanksgiving as they traveled to Walt Disney World in Florida.

Fifty one students and four chaperones made the Thanksgiving Break trip by charter bus down to Florida for a week of music, Disney magic and fun. While there, the band had several performance opportunities, including participating in the Disney Performing Arts “You’re Instrumental” workshop.

During the clinic, students worked with a Disney clinician who led the students through several sight-reading exercises, and talked about what it means to be a professional musician. The workshop culminated with our students rehearsing and recording the music for the ending of “The Little Mermaid”, which was then matched up with the movie. They also had the opportunity to be the backup band playing “Trashin’ the Camp” from Tarzan, for the clinician to solo over.

“Our students performed very well during clinic, and I received great feedback from the clinician about their strengths and weaknesses,” said New Buffalo Band Teacher Christina Baumann. “As a director, it was nice to sit back and listen to someone else work with our group, because I was able to identify overall concepts that I would like to improve for our Holiday concert and going forward.”

The highlight of the trip was the band’s performance on Thanksgiving Day, marching down Main Street in the Magic Kingdom. They were the only group to be featured in the evening, performing in front of tens of thousands of vacationers from all around the world.

The New Buffalo High School Marching Band played a medley of songs from the movie “Frozen,” much to the delight of the many young kids dressed up in costume. The band ditched their traditional marching band hats in favor of Disney Performing Arts Mickey Ears, which are only earned by students performing in the Disney parks.

“The march down Main Street is very special to me, as I’ve been going to Disney with my family almost every year since I was a kid,” Baumann noted. “It is so fun and fulfilling to see our kids as part of the Disney “magic,” and to know that this memory of being together as a band will stay with them for the rest of their lives.”

Another highlight of the trip was heading offsite to the Roback home, about a half hour from the parks. Thanksgiving dinner was prepared by Baumann’s parents, Dave and Sue, brother Kevin, and husband John.

“With all of our students, parents, and chaperones, the Robacks prepared a traditional Thanksgiving dinner for 79 people!” Christina said.

Throughout the week, students were able to visit all four Disney parks, were granted access to enter the Animal Kingdom early one morning, and got the first ride of the day on the park’s roller coaster, Expedition Everest.

“As a senior in the band, I knew that the Disney trip was going to be special and memorable,” said Grace Gradowski. “I didn’t expect the marching performance through the Magic Kingdom to be as magical as it really was. It was one of the most exciting and cool experiences I’ve ever had. It was the perfect bookend for my time in the color guard with the marching band, and I was emotional as I walked down Main Street performing with the color guard for the last time. I’m so thankful for the opportunities we had at Disney and the whole trip.”

Baumann said the New Buffalo High School Marching Band takes the Walt Disney World trip once every four years so all high school band students have the opportunity to participate in the once-in-a-lifetime experience.

“The trip went very smoothly because we have great kids in New Buffalo,” she said. “I am very grateful to the parents allowed their kids to spend the week with us, who traveled down and supported us at our performance, the chaperones who helped make the trip run smoothly, my family for cooking Thanksgiving dinner, and the New Buffalo admin and school board for giving our students this amazing opportunity.”