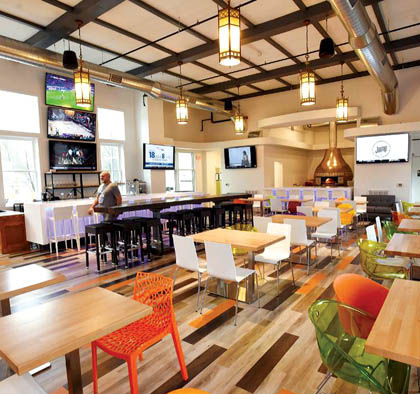 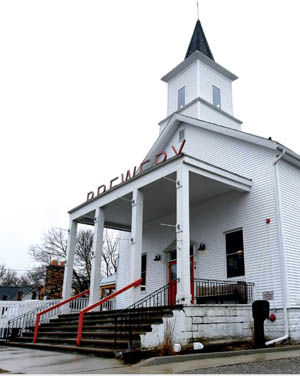 The Beer Church Brewing Co. is located in a former Methodist church in New Buffalo, dating back to 1861. 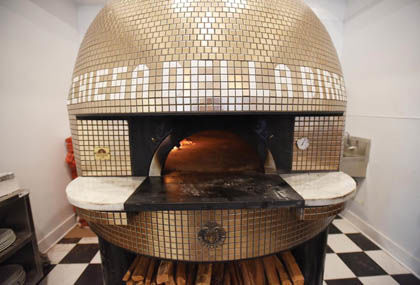 The Beer Church Brewing Co. is located in a former Methodist church in New Buffalo, dating back to 1861.

As part of the third and final phase of renovations, the co-owners plan to open the new taproom/ restaurant by the mid-February.

With ongoing work the past few months, Beer Church shut down its taproom and was only able to serve beer outdoors through the igloos stationed in the beer garden.

“It seems like forever,” Lustina joked  during a Feb. 7 interview. “Everyone was sad about only being able to be outside. But this is worth it. We’re really excited about being able to have food.”

Prior to opening Beer Church in February 2017, the couple had spent another two and half years trying to break ground. Originally, Lustina said they wanted to have both the beer garden and restaurant ready for the opening.

Everything was split into three phases, with the beer garden opening this past summer.

Housed in a white church with wide windows, the brewpub is hard to miss at 24 S. Whittaker St. in downtown New Buffalo. According to Lustina, the church was built in 1861 and was used as an armory by the Union during the Civil War. For most of its life the building was home to a Methodist church until the congregation moved several years ago.

Lustina said the two biggest complaints Beer Church has had to contend with were the lack of seating and food.

The renovation addresses both problem areas.

The inside of the brewpub can now seat 103 people, while the outside can house 67 guests. The menu includes 12-inch personal pizzas, wings, sandwiches and various breads.

The pizzas will be baked in a vesuvio oven, which was flown in from Italy. Made from clay that was formed at a mountain in Naples, the oven was personally tiled to read “Chiesa Della Birra” – which is Italian for “Church of Beer.”

Lustina, who claims to have the only vesuvio oven in the Midwest, paid $20,000 for the wood-fired oven. He refers to it as “the Cadillac of ovens.”

Installing the oven proved difficult. Workers were forced to cut a hole in the back wall of the church after adding steel reinforcement beams in the floor to support the mammoth oven.

Lustina and Simon trained under Roberto Caporuscio, a pizza savant, to learn how the dough should be prepared and how the pizzas are cooked. Beer Church will offer two styles of Neapolitan pizza that have 10 variations on the menu.

“We took weeklong course and it was very intense,” Lustina said.

The pizzas are made with imported toppings/ ingredients and range in price from $14-20.

One of the first things patrons will notice is a large mural that dominates the western wall of the brewpub.

The mural wasn’t part of the original plan.

But Lustina and Simon wanted an art deco vibe and eventually hired Indiana artist Felix Maldonado. The couple wanted Maldonado after spotting a few of his Jackson 5 murals. It took him two weeks to craft the mural.

Referred to as “Graffiti Renaissance,” the mural’s bottom half is a graffiti painting that intertwines the name Beer Church through various shapes and colors.

“It made us think of a neighborhood in Miami that’s called Wynwood,” Lustina said. “It’s an art district. It’s a living outdoor gallery.” The top portion has two stoic figures lounging above windows with a pattern that resembles the quatrefoil on the church’s original lanterns.

“We wanted customers to get the feeling of Florence and the Renaissance movement,” Lustina said.

The brewpub reused some of the original pieces from the 19th century church.

In addition to the doors and glass at the front, Lustina said they are using the lectern as the hostess stand, the alter for carryout or ordering beer, and a few pews for seating along a wall. One of the pews is used for the waiting area.

The inside of the brewpub has a more modern decor because the church was very dark, Lustina said.

“One of the first things we realized was we needed to lighten it up,” he said. “Once we saw all the white walls we got the feeling that it was kind of like an art gallery.”

In addition to the mural, Beer Church has colorful seating and blue lighting centered under the white bars. Beer Church now has a staff of about 25 people – more than double its previous staff – but Lustina said they hope to have at least 30 by this summer.

The hours are also likely to change with the added kitchen staff.

“By the time we’re getting to spring – and certainly summer – we’ll be open every day, 11 (a.m.) to midnight,” Lustina said. “We want to focus on late lunch and dinner for now. We’ll eventually move to two shifts.”

The brewpub has a C license that allows it to also sell cocktails and wine. As of Thursday, Beer Church is waiting on a final license to be approved until it can reopen its taproom.

Lustina said the continuous two-year process was a blessing in disguise.