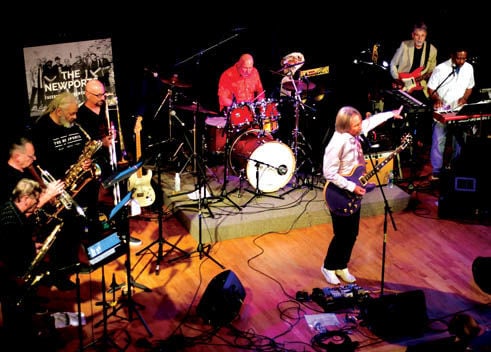 The Newports perform on the Acorn Theater stage Saturday night, July 6, during a concert celebrating the release of their debut album “Live at the Acorn!” - photo by David Johnson 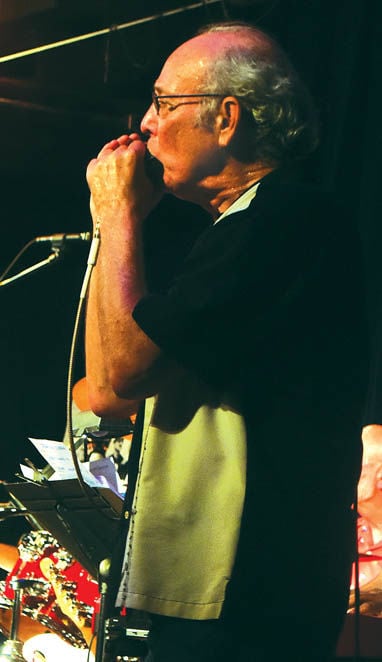 Jumpin’ Gene Halton plays a harmonica solo during the July 6 Acorn Theater concert celebrating the release of “Live at the Acorn!” 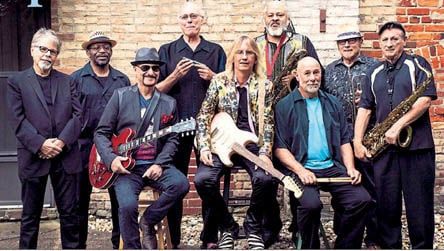 Members of The Newports, a band originally formed in 1961 when Bill Bielby (left) was in the eighth grade at Roosevelt School in Dolton, Ill. The band re-grouped to host an open mic night at The Acorn Theater in July 2015. - photo provided

The Newports perform on the Acorn Theater stage Saturday night, July 6, during a concert celebrating the release of their debut album “Live at the Acorn!” - photo by David Johnson

Jumpin’ Gene Halton plays a harmonica solo during the July 6 Acorn Theater concert celebrating the release of “Live at the Acorn!”

Members of The Newports, a band originally formed in 1961 when Bill Bielby (left) was in the eighth grade at Roosevelt School in Dolton, Ill. The band re-grouped to host an open mic night at The Acorn Theater in July 2015. - photo provided

THREE OAKS — When the nine members of the blues/rock/ soul ensemble The Newports get together, it’s always distinct.

“It’s not just distinctive music, it’s a distinctive kind of performance,” bassist Bill Bielby said. “We have our own distinctive take on those genres because everything is horn-based, and Mark (Rongers) is this high energy, high driving, high vocalist, guitar player and never sits still.”

The Newports made a triumphant return to The Acorn Theater on Saturday night, July 6, with opener Funky Mojo Daddy, for the release of their debut album “Live at the Acorn!”

Bielby formed what became The Newports in 1961, when he was in eighth grade at Roosevelt School in Dolton, Ill. Initially, they called themselves The Trebles, but changed their name to The Newports a year after forming.

The band continued when they went to high school and became popular in Chicago’s south suburbs.

Bielby left the band when he went to college, and the band dissolved the next year. Other than playing in a band his freshmen year of college, and another band when he was a graduate student at the University of Wisconsin, Bielby quit playing music.

“One of the guys decided to get a bunch of us back together to host an open mic night at The Acorn in July 2015,” Bielby said. “Most of us hadn’t seen each other since those days. A couple of guys from northwest Indiana, who weren’t part of the original band, joined too, and that sort of clicked, and we kept it going.”

Over the last four years, The Newports are averaging two shows a year at The Acorn and regular performances at festivals and clubs between Southwest Michigan and Chicago.

“We’re performing about as much as we want to,” Bielby said. “Once a weekend from Memorial Day through October, then a little on the shoulder season, that’s fine. In fact, we talked a little bit about maybe next season going after better and bigger venues, and more Chicago stuff, and doing it a little less often.”

He said The Acorn is the group’s favorite place to play and not just for sentimental reasons.

“It’s sort of where we got our second life, but it’s a perfect sound system with state-of-the-art technology and a highly professional sound technician,” Bielby said. “Basically, we get to do a stage show version of what we play in clubs.”

The live album, which was released July 6, is a collection of songs from a live performance in November.

“Evan Margol, who runs the sound over there, does all of our shows. We do audio and video recordings every time we’re there, and he mixes it for us afterward,” Bielby said. “I was talking to the company that’s manufacturing the CD, and they said they’ve never gotten live performance audio of that kind of quality.”

He said it’d be nice to go into a studio some time and do some original music, with multiple takes, but this way comes pretty close to that quality at about a fifth of the price.

“Also, at the time, white suburban kids were discovering Chicago electric blues,” Bielby said. “So we all have that in our background, and then the appreciation for classic rock: rock music that any baby boomer would be embracing.”

On Saturday, the audience that filled The Acorn enjoyed a show that began with a cover of the theme song from “Shaft” (because the third movie just came out, Bielby said, adding “It’s a great horn song”).

The horns are one of the ways the band tries to be distinct and make songs their own. One that they’ve made their own is David Bowie’s “Let’s Dance.”

“We actually decided to start playing that after he passed away as a tribute to him,” Bielby said. “And we have Gene, our harmonica player, play congas on that. The horn guys have a great horn line, and it’s a perfect bass line for me to play. So it has a real ’60s soul feel to it. There’s one chorus where we all drop out except for the congas for 12 whole bars. Then we all come back in at once. It’s a really great dynamic.”

The group also visits songs by The Doors, The Beatles, and some contemporary blues, like Gary Clark Jr.

“Where he has a big, big guitar solo, we make that a big horn thing,” Bielby said. “It starts out soft, then does this big crescendo. It gets us going and it gets the audience going.”

He said when they’re up on stage, the audience can tell the band is having the time of their lives.

“For some of us, it was bringing back the glory days we hadn’t had since high school – me, Jeff and Ralph,” Bielby said. “And for the others, they’ve been performing one way or another, professionally engaged in music, for half a century. Because we have these connections that go way, way back, it’s a bond that doesn’t always exist in bands.”