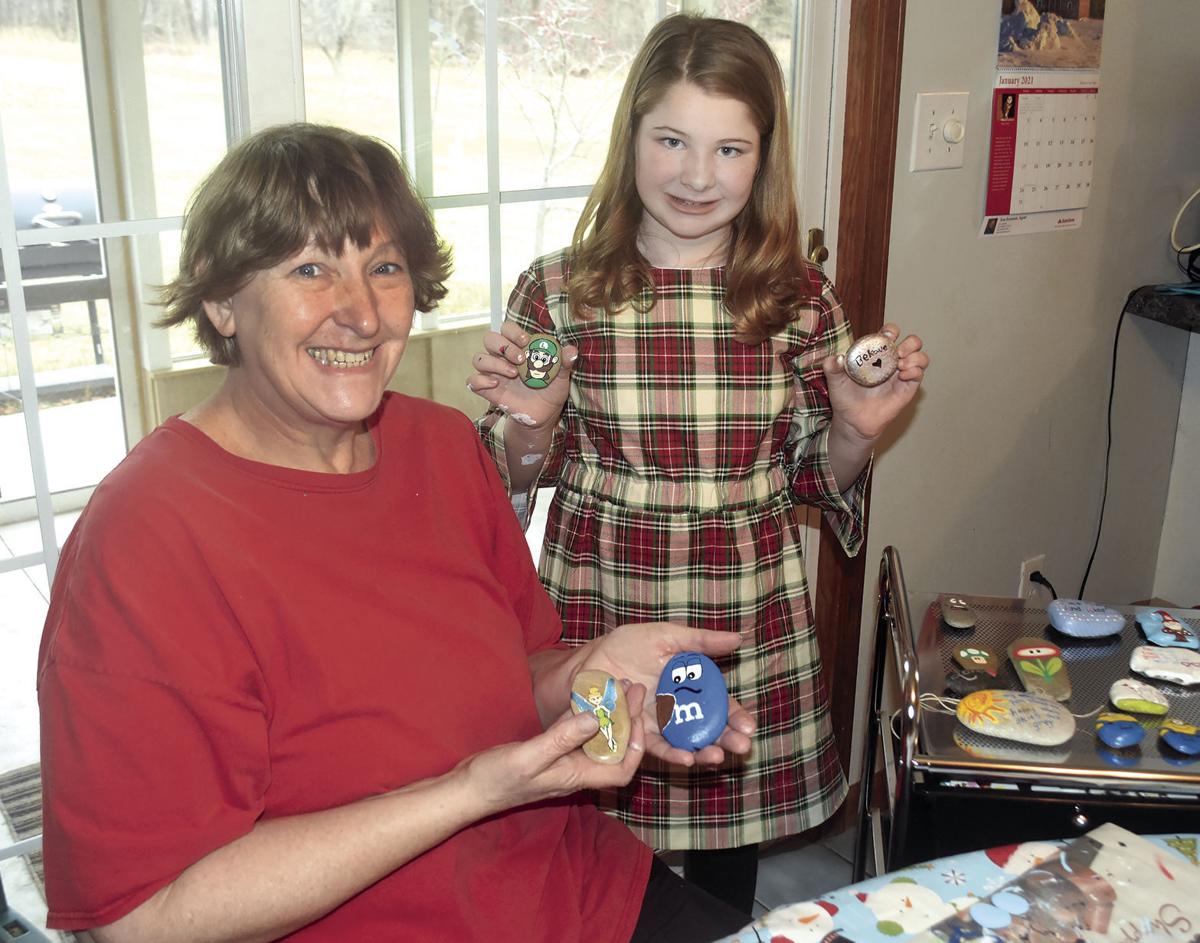 Becci Umphrey and Ella Lijewski with some of the rocks they painted during a recent holiday break session. 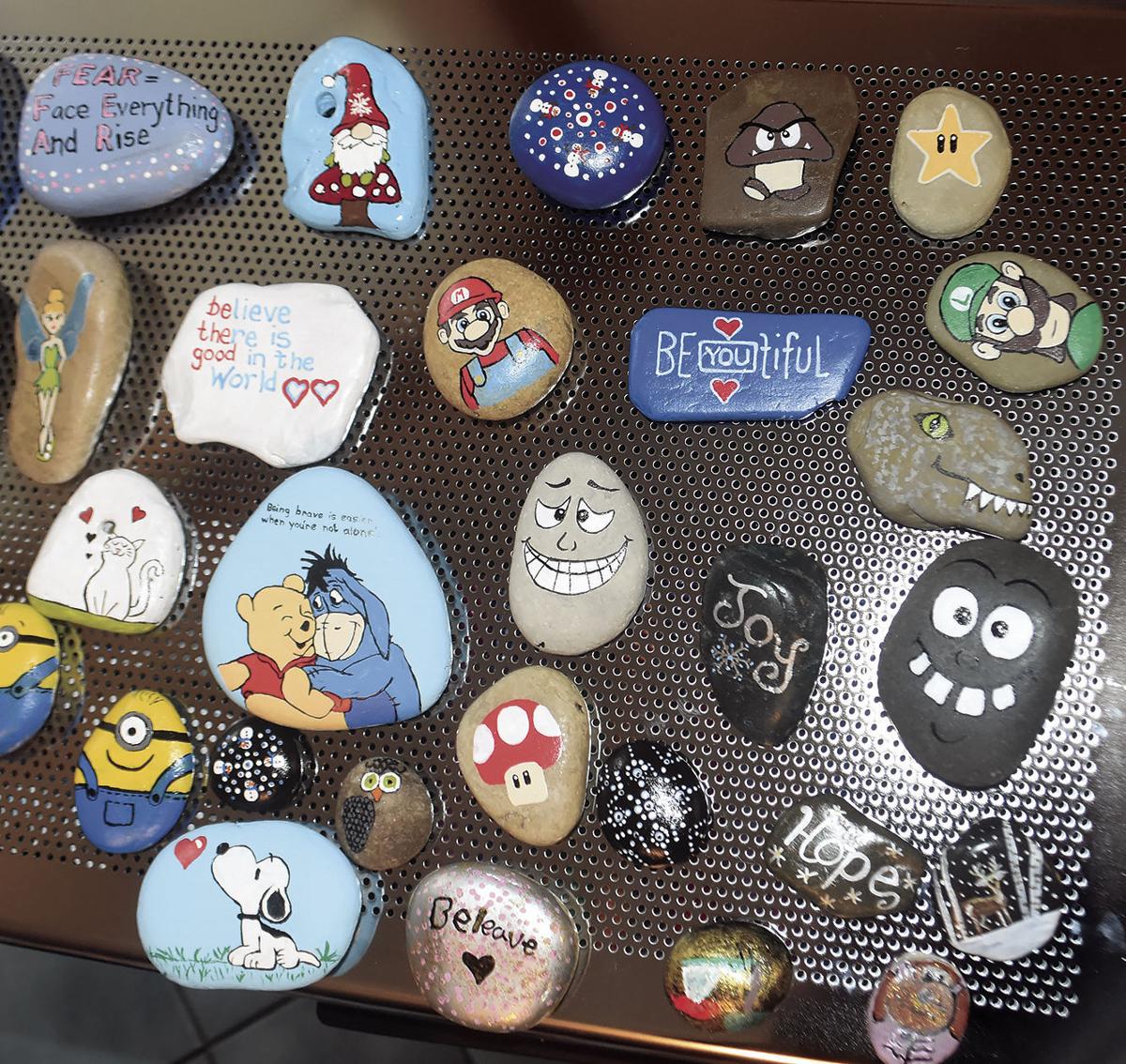 A new crop of painted rocks ready to go public. 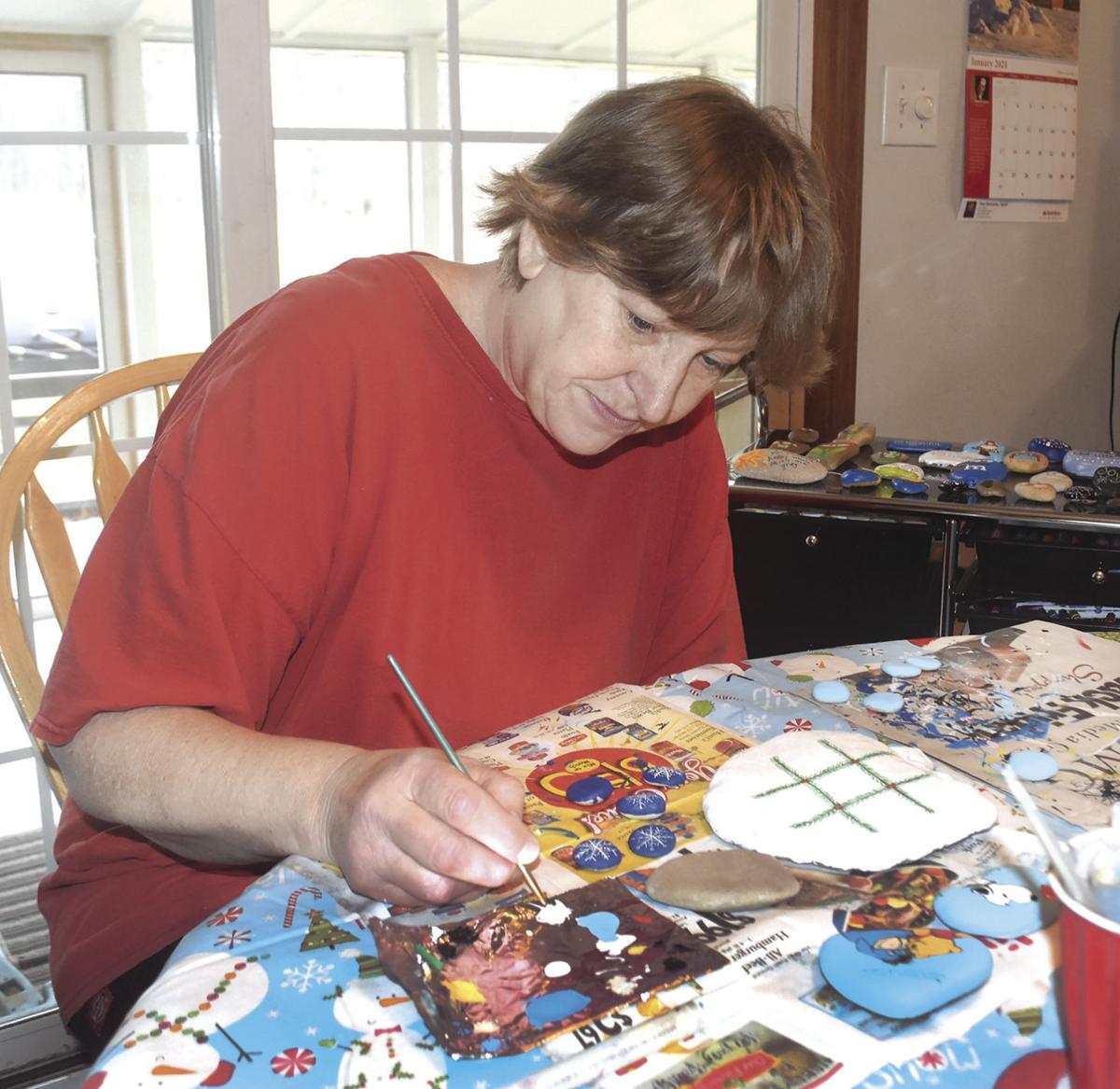 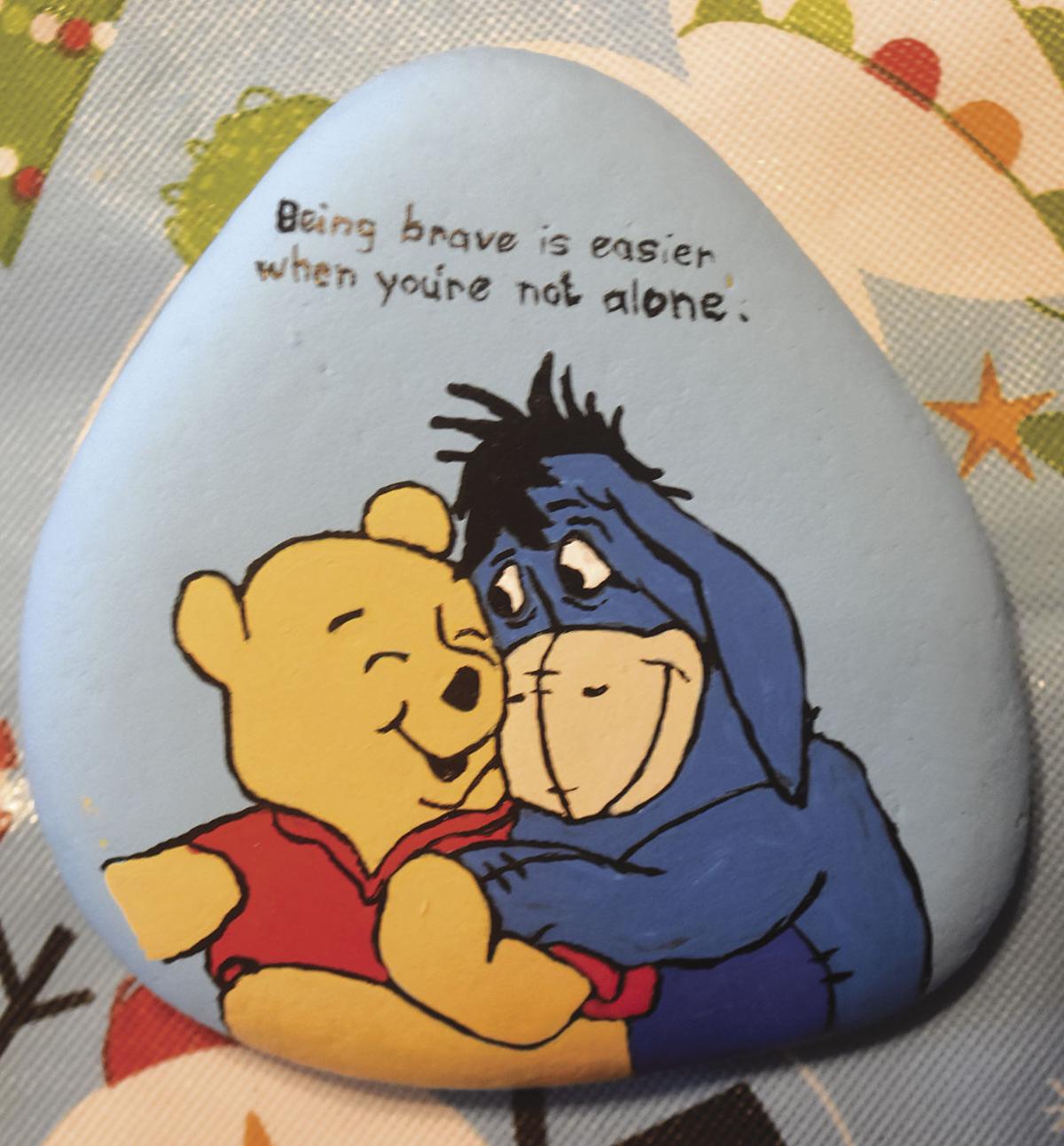 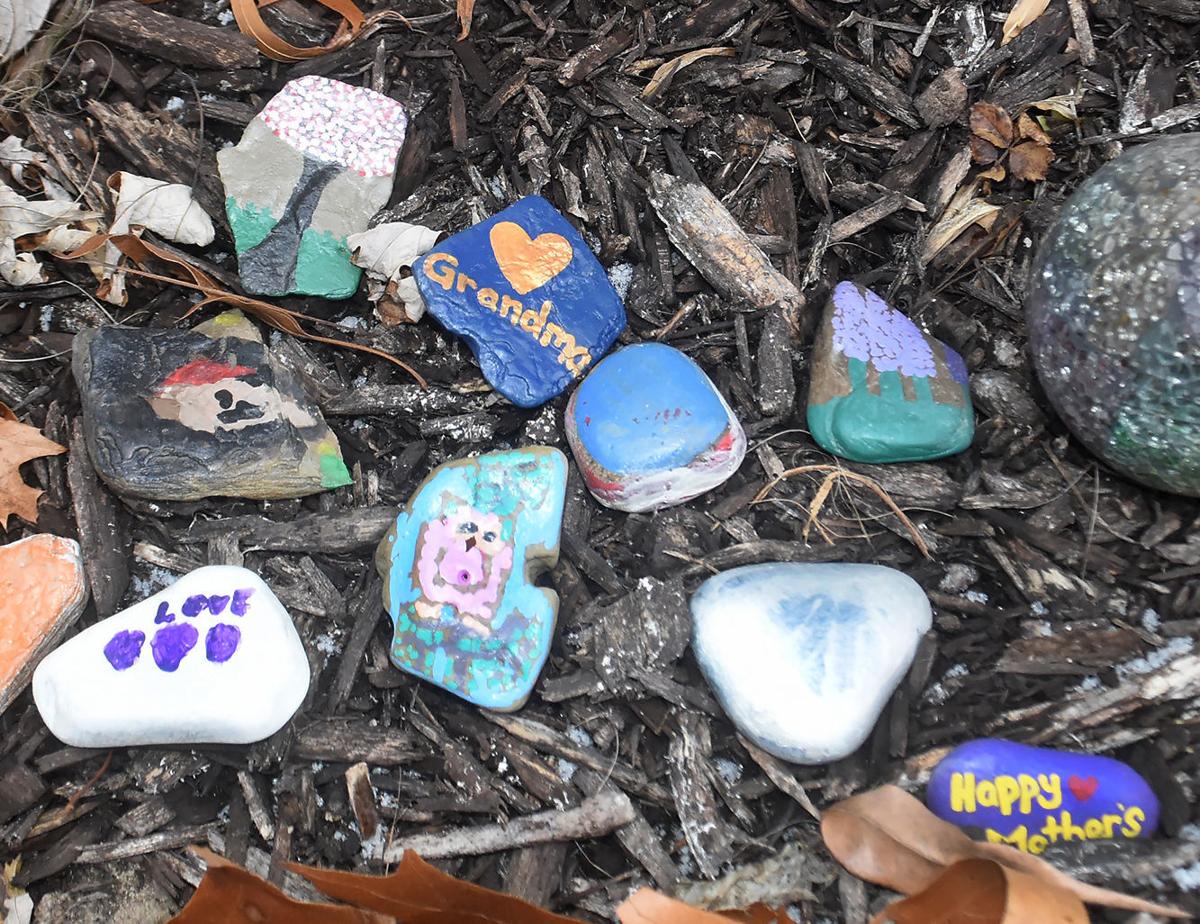 A collection of rocks Becci Umphrey’s grandchildren made for her.

Becci Umphrey and Ella Lijewski with some of the rocks they painted during a recent holiday break session.

A new crop of painted rocks ready to go public.

A collection of rocks Becci Umphrey’s grandchildren made for her.

NEW BUFFALO — Painted rocks are popping up all over Harbor Country, and Becci Kissman Umphery has created many of them.

“When I start painting I don’t stop,” she said during a recent stone-decorating session with granddaughter Ella Lijewski.

When the COVID pandemic first hit last March, Umphrey said she had cleaned her house, cleaned her yard and cleaned the nearby trails surrounding New Buffalo Elementary – “and I thought ‘I’m going to paint rocks and put them on the trails.’”

Umphrey said her cousin, Karla Madison, has a New Buffalo Rocks Facebook page, and it became an avenue to let people know when and where the painted rocks could be found.

She began placing (not hiding) the rocks in the woodland trails around New Buffalo Elementary School. The effort has since expanded to include other locales such as Oselka Park, New Buffalo Township’s Memorial Park, downtown New Buffalo and the public beach, Galien River County Park, and Warren Dunes State Park. Umphrey said she put quite a few out at Warren Dunes because it was a pretty big gathering spot for a while during the pandemic.

Umphrey said she usually puts the rocks out in groups of 20 or more (up to as many as 100 in many designs including Halloween, Christmas, Pikachu, inspirational messages, Super Mario Brothers, owls, funny faces, cartoon characters and more).

“I really enjoy doing it because I see how happy people are,” she said.

The New Buffalo Rocks Facebook page states that its singular and simple goal is to “SPREAD JOY” and includes the following message: “We are painting rocks to ‘hide’ around New Buffalo, Michigan (this includes all of Harbor Country – Michiana, Grand Beach, NB, Union Pier, Lakeside, Harbert, Sawyer and Three Oaks). This is a community-building group meant to inspire creativity in all ages and energize people to explore the beautiful joy and brighten people’s day. Come join us! All you have to do is find some rocks and some painting supplies and get creative! This is surprisingly fun for ALL ages young and older. Need inspiration? Search ‘rock painting’ on Pinterest or Google Images to find lots of rock painting ideas. Artwork that is PG rated is appreciated as kids love to look for and find the hidden rocks.”

The New Buffalo Rocks page is filled with posts by people who have found some of the miniature works of art in the area.

“Some of them put them back … some of the kids trade them or re-hide them for each other,” Umphrey said.

A question that comes up often is whether people should keep the rocks they find.

“Although I would prefer people to take just one or two and leave some for other people, some people take a whole bunch and I’m OK with that, because I can always put more out,” she said.

Umphrey said she’s not the only person in the community painting rocks and leaving them in public places.

She said one of the local rock artists, Colin Harvey, left some of his unique designs (including a tiny slice of pizza) in downtown New Buffalo with clues posted on the Facebook page.

“There are a lot of people painting. My sister (Krindy Kissman) has done some, a friend I work with has done some. My grandkids come over and paint with me,” Umphrey said, adding that Ella has “gotten really good at it.”

“You can do what you want on different surfaces … It kind of depends what it is for me to decide what I’m going to do on it.”

Umphrey said she gets many of her flat rock “canvases” along the lakeshore including Grand Beach where a friend’s beach is full of good rocks.

Umphrey said she took the holidays off (she works as a custodian at New Buffalo High School) and created quite a few rocks for the new year. During a recent painting session she was creating tic-tac-toe sets (with a large flat rock serving as the board and small pebbles as the Xs and Os). She noted they are usually the first to go when they are put outside.

“After I set them out I go on (the New Buffalo Rocks page) and I say ‘rocks are out.’ And sometimes I’ll have hints with them and sometime I won’t ... Anytime I’d put a picture of a tic-tac-toe it was gone almost instantly.”

Umphrey said her last placement of about 60 painted rocks took place around New Buffalo Middle School because students were still in class before the holiday break and “the kids had a blast.”

Umphrey has also tried to brighten the difficult year of 2020 with messages such as “Believe there is good in the world” and “Be-YOU-tiful.”

She made a special batch for the New Buffalo High School Class of 2020 outdoor graduation ceremony.

Some Valentine’s Day designs are in the works, and the next place new rocks will show up will be posted on the New Buffalo Rocks page.