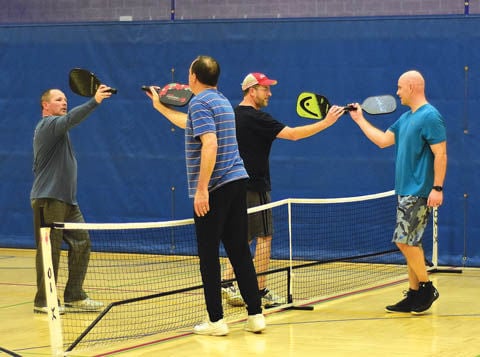 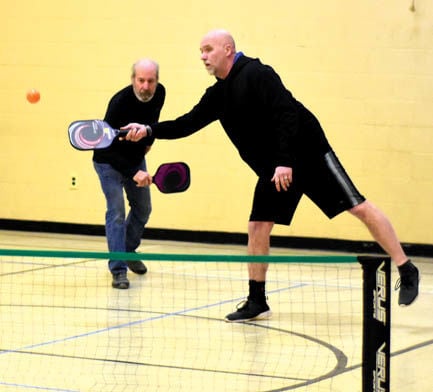 Terry Hanover and Ken Rochefort (from left) team up to play picklebal in the New Troy Community Center's all-purpose room on a recent Thursday evening. 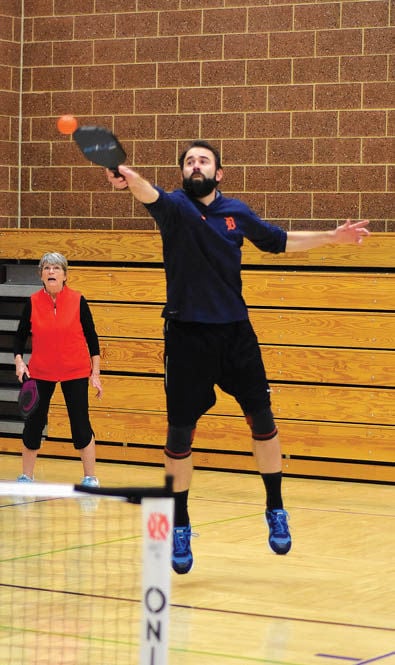 Michael Tate goes up to hit the pickleball back across the net on Feb. 11 in the New Buffalo Elementary gym. 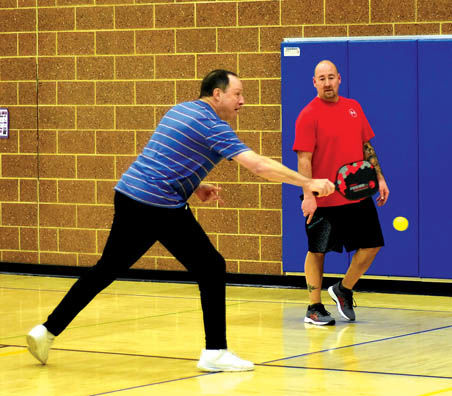 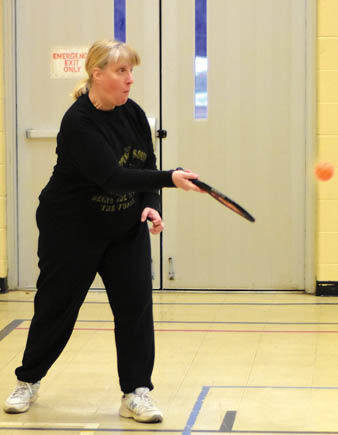 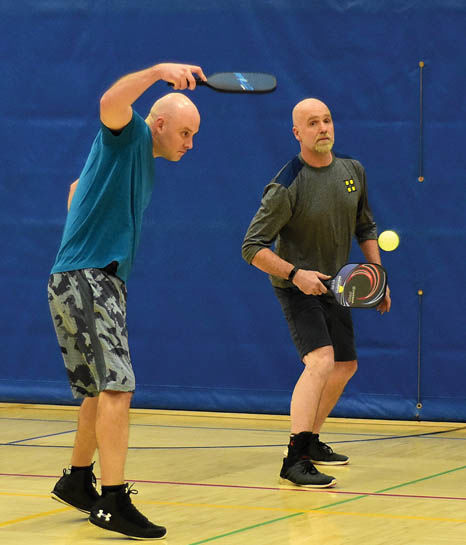 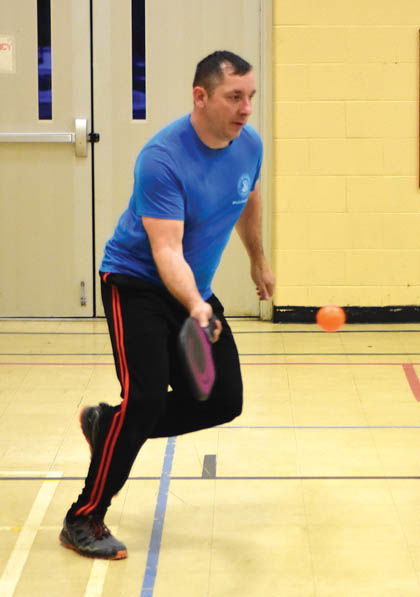 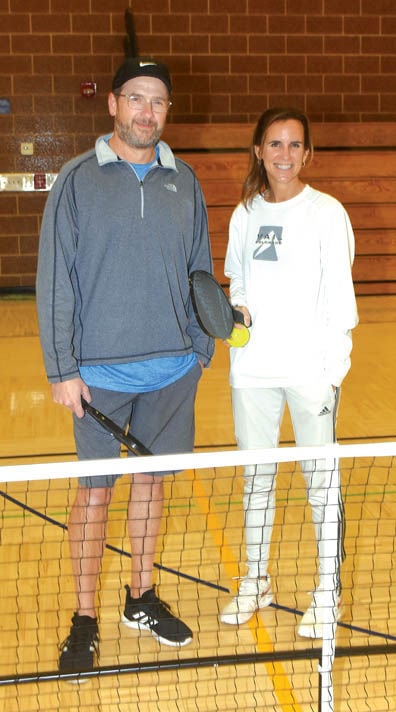 Matt and Mary Moon at a recent New Buffalo pickleball night. The couple learned to play the sport during a Caribbean cruise. 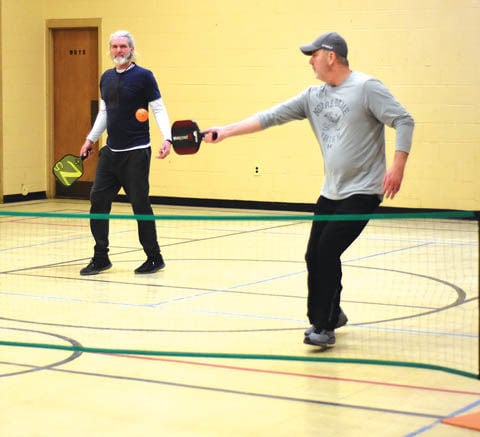 Terry Hanover and Ken Rochefort (from left) team up to play picklebal in the New Troy Community Center's all-purpose room on a recent Thursday evening.

Michael Tate goes up to hit the pickleball back across the net on Feb. 11 in the New Buffalo Elementary gym.

Matt and Mary Moon at a recent New Buffalo pickleball night. The couple learned to play the sport during a Caribbean cruise.

Pickleball is truly a sport for all seasons.

The “tennis-badminton” mash-up can be played outdoors during the warmer months (as it often is at venues such as the courts across Clay Street from New Buffalo Middle/High School) or inside when the snow is flying.

Local opportunities to play winter pickleball are offered at the New Troy Community Center (5:30 to 7 p.m. Tuesdays and Thursdays year-round except for the third week of the month during October-April Flea Market season) and in the gym at New Buffalo Elementary School (6:30 to 8:15 p.m. on Tuesdays and Fridays).

During a recent Thursday evening session in the New Troy Community Center’s all-purpose room, plenty of laughter rang out during a series of spirited matches.

“Most of us learned the game together and we’ve been playing against each other for like three years now,” said Mark Forrest of Union Pier between matches on a recent Thursday evening. “We’ve all grown at the same time and we’re very competitive. We have a lot of fun.”

Sawyer resident Jenny Gabbard said she just wanted to try pickleball when she began playing a year and a half ago in New Troy.

She now plays year-round and said she is improving and really likes the opportunity to get regular exercise that the sport provides.

Terry Hanover (of the Friends of New Troy group that operates the Community Center) said Pickleball is “a game that can be played by young and old,” noting that both he and his grandson are competitive and have fun.

“We invite everybody to come in and just play. It doesn’t cost anything,” he said.

The Tuesday night, Feb. 11, scene at New Buffalo Elementary featured 13 players, allowing for plenty of Pickleball “doubles” action (matches can be played with one or two players on each side of the net, although doubles seems to be the preferred arrangement).

Angela Trainor, of Grand Beach, along with her husband, Ed (both New Buffalo HIgh School graduates), have been playing for about three years.

“We needed some indoor activity in the winter because the roads are so bad and we’re walkers,” she said.

Angela noted that they learned the sport from a different group of people in New Buffalo.

“It just keeps changing. A lot of the snowbirds leave, but when they come back they like to play outside in the summer,” she said, adding that another wintertime place to play is the La Porte County YMCA in Michigan City.

Jan Tomecek, credited with maintaining the email list of Pickleball players for New Buffalo (up to more than 60 names), said she and her husband, Frank, began playing outside at the Clay Street courts.

“I was a former tennis player as many people are, and then they switch over to pickleball.” she said.

Jan said there are currently about 20 winter players who are “really active.”

Jan said one of the great things about the sport is it’s truly co-ed.

She noted that new outdoor courts will soon be built next to the middle/high school (as part of a STEAM Building project).

Ken Rochefort, who plays pickleball in both New Troy and New Buffalo, was giving some tips to new players in New Buffalo on Feb. 11.

“Everyone learns match by match.”

Scott Rice said it was his second time ever playing, adding that he joined some people from work (the Four Winds Casino) to “come out and get a little bit of exercise.”

During an earlier Friday night session in New Buffalo, Matt and Mary Moon said they learned to play Pickleball while they were on a cruise ship in the Caribbean.

Mary said there were “a ton of people” who played on the ship.

Matt noted that matches played on the ship’s top deck could be challenging due to “a 40 mile-per-hour wind.”

“We came back and decided we have to figure out where to play,” he said.