You have permission to edit this article.
Edit
Home
News
Features
Sports
Photo Galleries
Opinion
Obituaries
Community
Classifieds
Jobs
How Do I?
1 of 10 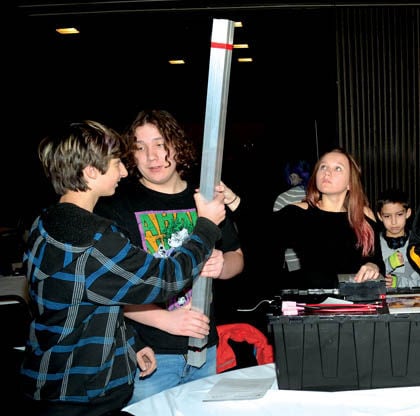 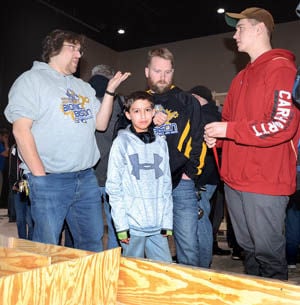 Rob Hauch, Tim Raykovich, Mike Irwin and Daniel Fairchild of the Bionic Bison team (from left) discuss the new Power Up game while exploring a mock-up of the playing field. 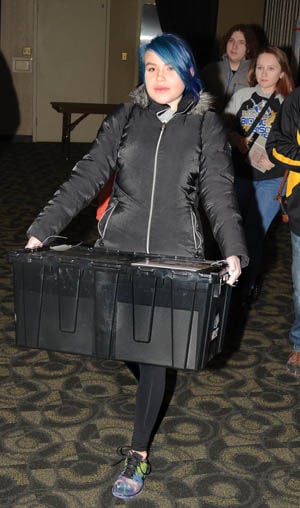 Bailey Ferrell of the Bionic Bison team retrieves some of the 2018 robotics supplies at Lake Michigan College. 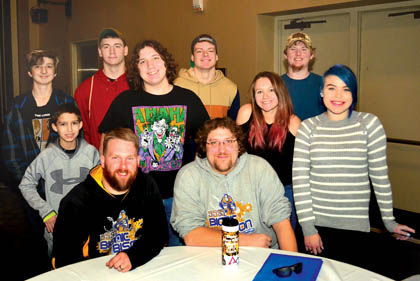 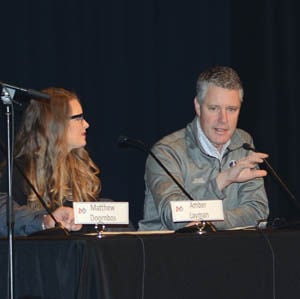 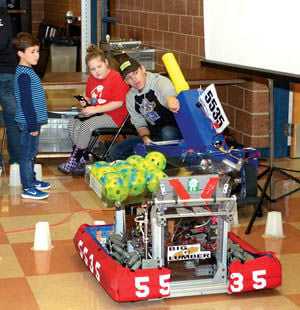 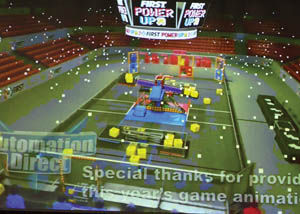 The FIRST Robotics Power Up game playing field as presented during the Jan. 6 kick-off event. 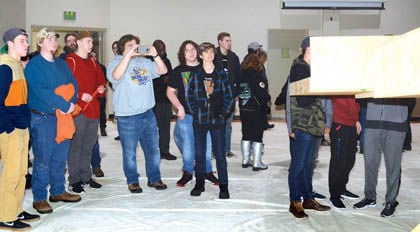 Checking out a mock-up of the Power Up playing field in the LMC Mendel Center on Jan. 6 are (from left) Brenden Stark, Danny Bowen, Daniel Fairchld, Rob Hauch, Ashton Jabobs-Golebiewski and Ethan Moser of the Bionic Bison. 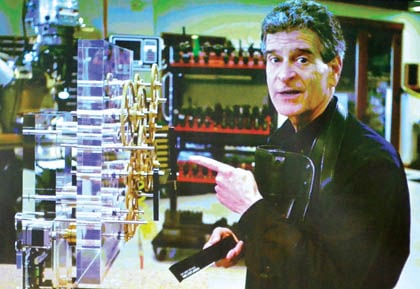 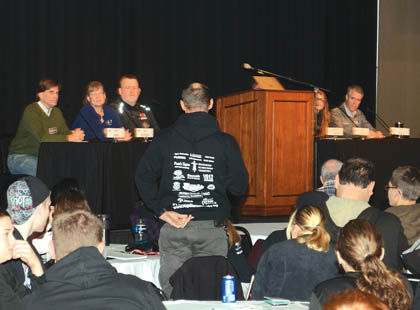 The panel participating in the Jan. 6 FIRST Robotics kick-off at LMC takes a question.

Rob Hauch, Tim Raykovich, Mike Irwin and Daniel Fairchild of the Bionic Bison team (from left) discuss the new Power Up game while exploring a mock-up of the playing field.

Bailey Ferrell of the Bionic Bison team retrieves some of the 2018 robotics supplies at Lake Michigan College.

The FIRST Robotics Power Up game playing field as presented during the Jan. 6 kick-off event.

Checking out a mock-up of the Power Up playing field in the LMC Mendel Center on Jan. 6 are (from left) Brenden Stark, Danny Bowen, Daniel Fairchld, Rob Hauch, Ashton Jabobs-Golebiewski and Ethan Moser of the Bionic Bison.

The panel participating in the Jan. 6 FIRST Robotics kick-off at LMC takes a question.

BENTON HARBOR — The Bionic Bison face a series of challenges to help their robot (which will stand-in for a vintage 8-bit video game character) escape from a playing field modeled on something you might have found inside a 1980s-vintage arcade in the FIRST Robotics 2018 “ Power Up” game.

Oh my gosh it’s challenging this year,” said Rob Hauch, coach of the New Buffalo High School robotics team after getting his first look at Power Up. “We’re going to do a lot of reading of the game manual.”

The Grand Upton Hall at Lake Michigan College was filled with area high school robotics teams on Saturday morning, Jan, 6, for the kick-off of the 2018 FIRST Robotics competition season and the introduction of this year’s game. A live video feed of the “Happy Kickoff” event in New Hampshire was screened, with FIRST founder Dean Kamen noting: “The world needs more capable, smart young innovators. FIRST Team members have been two steps ahead for many years now, taking the hands-on, real-world experience that we give them out into the workplace. They’re innovating in the world of technology, design, manufacturing — they’re making an impact.”

The following information on FIRST Power Up was supplied by the organization:

Two alliances of video game characters, and their human operators, are trapped in an 8-bit arcade game. Both alliances are working to defeat The Boss (a menacing figure looming over the playing fueled atop a central tower).

Each three-team alliance prepares to defeat the boss and escape the 8-bit virtual world in three ways:

1. Control the Switches and the Scale — Robots collect Power Cubes (bright yellow squares the size of milk crates) and place them on plates to control switches or the scale (teeter-totter style fixtures on the playing field both low and high). When the scale or switch is tipped in their favor, it is considered owned by that alliance. Alliances work to have ownership for as much time as possible to maximize points.

2. Earn Power Ups — Robots deliver Power Cubes to their human operators who then place them into a three-sectioned “Vault” earning the Alliance Power Ups which are used to gain a temporary advantage during the match. There are three Power Ups available to teams: Force, Boost, and Levitate. Force gives the alliance ownership of the Switch, Scale, or both for a limited period of time. Boost doubles the rate points earned for a limited period of time. Levitate gives a robot a free climb up the tower to face The Boss.

3. Climb the Scale — Robots comb the scale in order to be ready to face The Boss. Each match begins with a 15-second autonomous period in which robots operate only on pre-programmed instructions. During this period, robots work to support the three efforts listed above as well as earn points for crossing their Auto Line.

During the remaining 2 minutes and 15 seconds of the match, the tele-operated period, student drivers control  robots. Teams on an alliance work together to continue to control their switch and the scale. They can also trade in their Power Cubes for Power Ups. During the final 30 seconds, teams work together to Climb to Face the Boss.

Daniel Fairchild, a junior on the Bionic Bison squad, said he sees getting the power cubes onto the elevated scale as being a major challenge.

Also expected to help build and operate this year’s robot are Noah Sharum, Colin Bendiner, Josh Shaner, Brenden Tanksley and Bodee Davis. Raykovich is one of three sixth-graders on the squad (the others are Payton Lijewski and Hagen Davis).

He had one word for the experience so far after the game had been revealed— “Awesome.”

“It’s a nice concept I think. It’s going to be really fun,” said Stark, a junior who is new to the Bionic Bison effort.

For Ferrell, the Jan. 6 kickoff gathering was truly a happy occasion. “I’m seeing a lot of my friends here and making a lot of new ones already, and they help me learn and make us a better team by helping us when we get stuck,” she said.

Along with Hauch and Mike Irwin, the New Buffalo squad’s mentors are set to include Derek Fairchild, Cara Irwin and Todd Tanksley.

Teams have six weeks to build their robots. They received a “Kickoff Kit” from the “Kit of Parts” during the Jan. 6 event made up of motors, batteries, control system components, construction materials and a mix of additional automation components. District competitions the Bionic Bison are scheduled to attend are an April 5-7 event at Battle Creek Lakeview and the March 8-10 district meet at St. Joseph High School.

Speakers participating in the local portion of the Jan. 6 kickoff stressed the career-building aspects of robotics, with Amber Layman of Kinexus recounting how her father stressed the importance of “heart and hustle” while imparting some advice of her own for the “lifelong learners” in the room. “Be willing to be flexible, be willing to be part of a team, to collaborate and know your role, to know when to lead and know when to guide.

Riley Cain, a junior and second-year member of the Bionic Bison, said the experience has already impacted her plans for the future.

“I was always interested in English, and since I’ve joined FIRST Robotics I’ve gotten really into STEM (science, technology, engineering and math) and I really like the idea of going into a science field. It makes me really excited for the future.”

Although Congressman Fred Upton was unable to attend the kickoff at LMC due to the weather, his District Director, Mike Ryan, said Upton talked with Kamen recently about what fantastic growth there has been in Michigan regarding FIRST Robotics.

“Fred is very proud if all of you and we’ll try and get him here for the regionals in St. Joe,” Ryan added.

Prior to the Power Up game release announcement, a video chronicling the growth of the CW Tech Robotarians team (No. 2959) which began in Coloma and has grown to include members from a number of area schools including Watervliet, Grace Christian, Lake Michigan Catholic and Michigan Lutheran, was shown.

More than 91,000 high-school students on 3,647 teams at 137 venues around the globe (in Australia, Canada, China, Dominican Republic, Israel, Mexico, Turkey, and the United States) viewed the 2018 Kickoff.

FIRST Robotics Competition participants are eligible to apply for more than $50 million in FIRST Scholarships. Students also learn and apply the FIRST ethos of Gracious Professionalism — a way of doing things that encourages high-quality work, emphasizes the value of others, and respects individuals and the community.