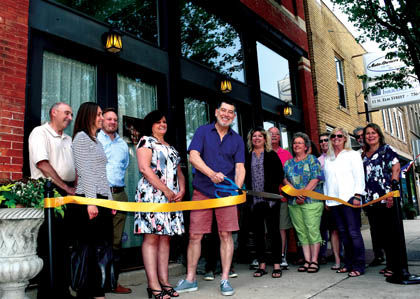 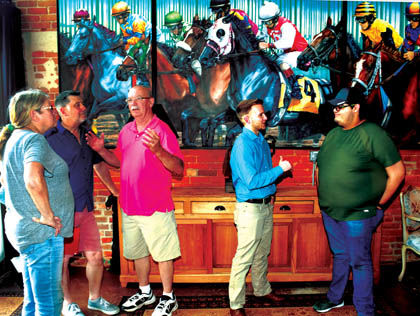 Socializing during the May 31 grand opening of artist Thomas Allen Pauly’s new A Drawing Room studio and gallery at 9 North Elm St. in Three Oaks. 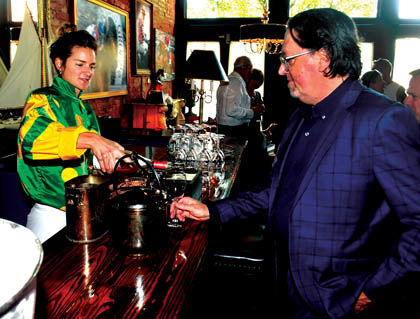 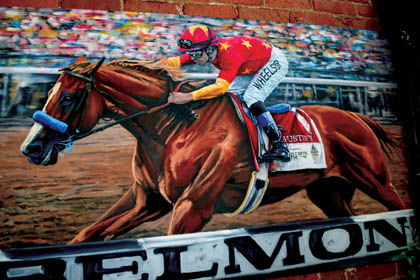 A Thomas Allen Pauly painting of Justify during the 2018 triple crown campaign.

Socializing during the May 31 grand opening of artist Thomas Allen Pauly’s new A Drawing Room studio and gallery at 9 North Elm St. in Three Oaks.

A Thomas Allen Pauly painting of Justify during the 2018 triple crown campaign.

THREE OAKS — For many attending the May 31 ribbon-cutting and grand opening event at “A Drawing Room,” getting a long-awaited look inside award-winning artist Thomas Allen Pauly’s new studio and gallery at 9 North Elm St. was a magic moment.

Pauly said he’s seen people peeking through the window in anticipation since he came to Three Oaks.

“Sort of like Willy Wonka, here’s my chocolate factory!”

The sumptuous space, which captures the old-fashioned elegance of an English Polo Club with its Indiana orange brick walls, leather-studded chairs and oriental rugs, is filled with Pauly’s colorful paintings, plenty of horse-racing memorabilia, rare equine art books and racing trophies perched on library bookshelves framed by jockey silks and leather saddles that glow in the warm Edison lighting.

Pauly said he has been doing paintings of race horses since June 17th, 1978, when a friend’s father invited him to a harness race at Sportsman’s Park. It was Pauly’s first visit to a race track, and a horse owned by his pal’s dad won.

“Two weeks later I got the winner’s picture, and for some reason I decided to do a painting of the horse. His dad bought it and ever since then I’ve been doing paintings of horses.”

At the time Pauly said he was doing caricatures for Mad Magazine and other illustrations.

His career as a portraitist of champions soon began to take off.

“Churchill Downs commissioned me to do Barbaro, the horse that won the Kentucky Derby in 2006 for their commemorative poster,” Pauly said.

He later was commissioned to do art for Brown Foreman’s Whitford Reserve Kentucky Derby bottles twice and the holiday bottle once.

And Pauly was the official artist for American Pharaoh, the 2015 Triple Crown winner.

He said one of the paintings of American Pharaoh (showing him racing at the Belmont Stakes) on display at A Drawing Place was part of an exhibit at the Kentucky Derby Museum.

After attending the last 19 Kentucky Derbies, Pauly said he christened A Drawing Place with a party on Derby Day 2019.

“Basically I moved my studio in Chicago right to here. It’s a beautiful building, it’s 137 years old,” he said.

The new space is similar to his studio in Chicago, “but this is much grander.”

“13-foot ceilings and orange Indiana brick, not to mention the bar,” he noted.

“I had the option to take the bar out, I said ‘no way! It looks awesome.’”

All of the artwork on display inside “A Drawing Room” is for sale (although Pauly said the furniture, trophies and jockey silks are not).

And new works are coming soon.

“This is why I’m here, I’m here to paint ... none of my studios have ever been open to the public, so this is interesting and different for me,” Pauly said.

Pauly said he and Marco Chavarry have been coming to the Three Oaks area for years, and recently decided to move here.

“Everybody has been so nice, we have met so many friends,” he added.

Chavarry is getting ready to open his second Alapash home decor/gift shop right across the street in Three Oaks (where Real Life Church was located before its move to 12 Michigan St. East in Three Oaks).

Chavarry said the Chicago Alapash store has been open for about eight years. The Three Oaks shop (expected to open in late June) will feature an eclectic mix of local products and imports from around the world (including home decor rugs, art and candles.

A Drawing Room gallery hours are 11 a.m. to 5 p.m. Friday through Sunday or by appointment. For more information, visit www.aDrawingRoom.com or www.horseartist.com.