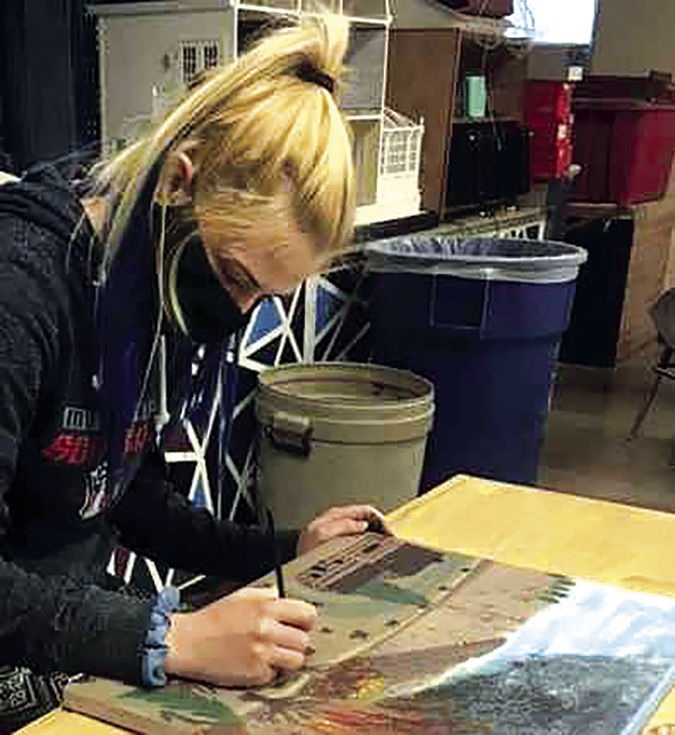 Brianna Martin adds some detail to her acrylic painting depicting the wildfires that threatened local residents in 1871. 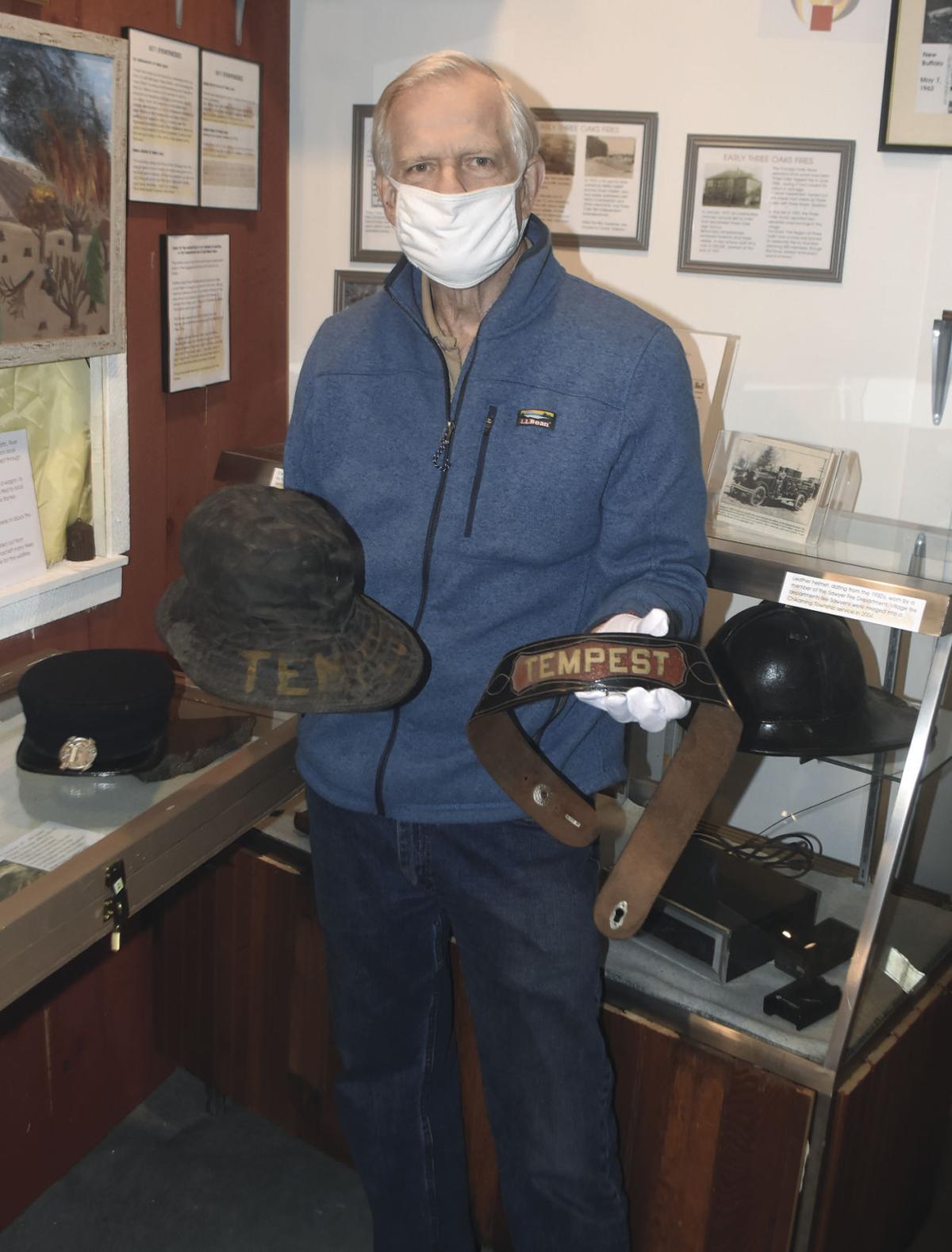 Nick Bogert with items from the Three Oaks Tempest Brigade firefighting crew established in the wake of devastating 1871 blazes. 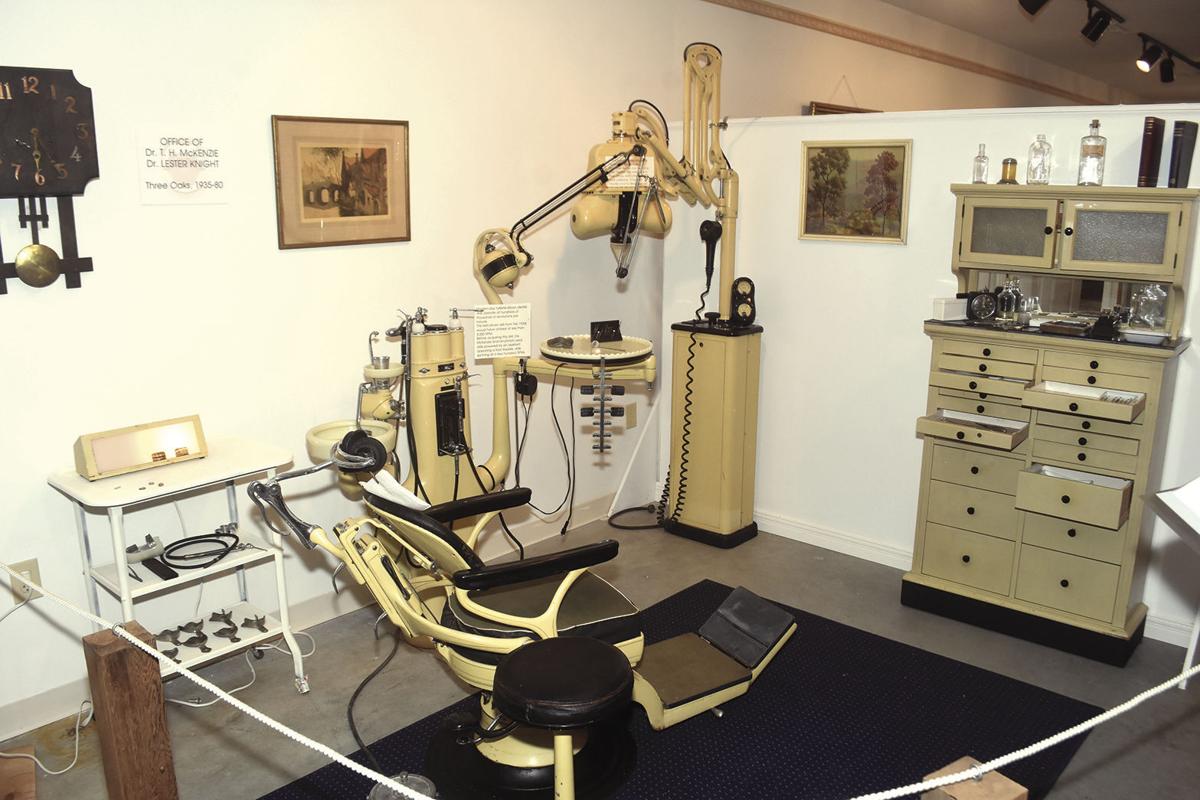 The 1935 dental office display inside the Region of Three Oaks Museum. 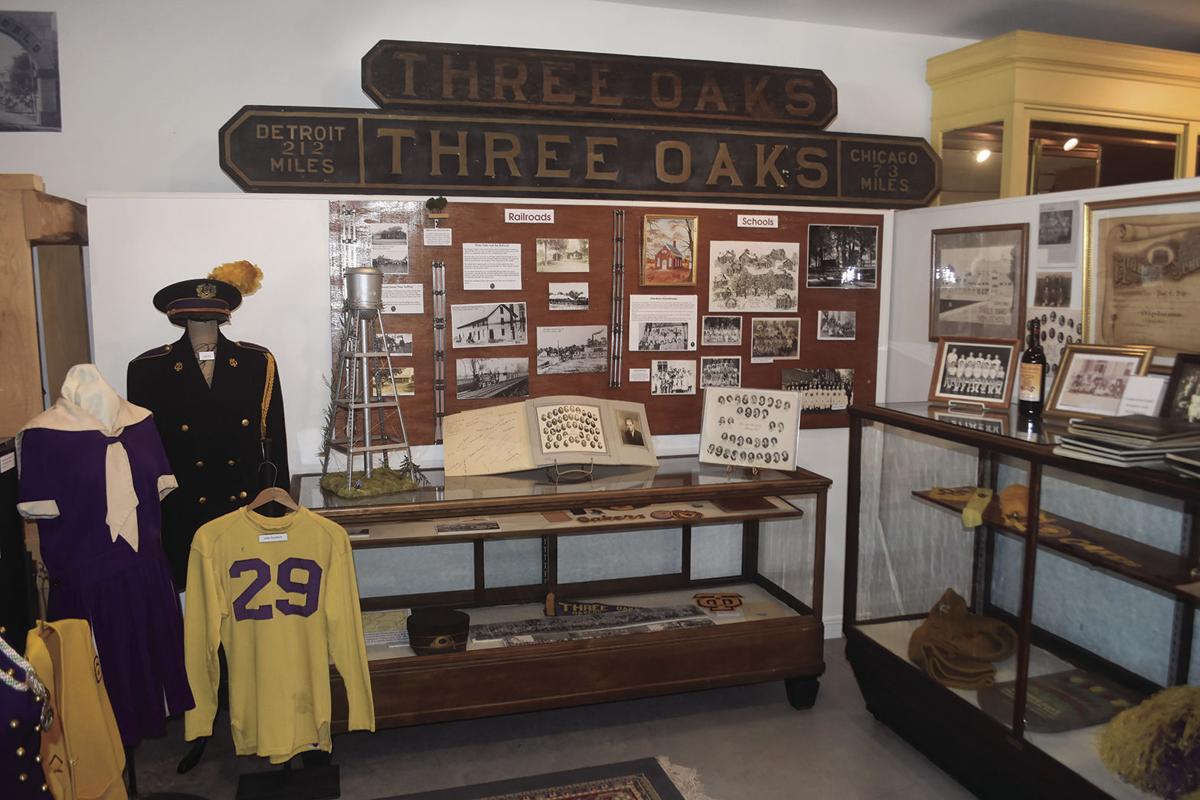 The Three Oaks “Oakers” display in the museum.

Brianna Martin adds some detail to her acrylic painting depicting the wildfires that threatened local residents in 1871.

Nick Bogert with items from the Three Oaks Tempest Brigade firefighting crew established in the wake of devastating 1871 blazes.

The 1935 dental office display inside the Region of Three Oaks Museum.

The Three Oaks “Oakers” display in the museum.

THREE OAKS — The Region of Three Oaks Museum will begin the 2021 season on Saturday, May 1, from noon to 5 p.m. (the doors will open in accordance with the latest COVID-19 guidelines and regular hours will be noon to 5 p.m. Friday-Sunday through October).

New exhibits include FIRE!, a look at area blazes of the past and the teams and equipment that fought them. In addition to artifacts from the Tempest Brigade, Three Oaks’ first fire company, the exhibit features an acrylic painting by River Valley High School Senior Brianna Martin depicting the 1871 fire that swept across the fields between Sawyer and New Troy.

After doing research on the wildfires, Martin said she chose acrylic because of its bright, vibrant color choices. Her painting depicts a family loading a wagon to flee the flames while others plow a firebreak in the fields to slow the blaze. Her attention to detail isn’t surprising when one learns her goal is to earn a doctorate in forensic science and become a medical examiner. She heard about the The Region of Three Oaks Museum (TROTOM) project from her art teacher Jacqueline Rowlison.

“I have been painting and drawing since i was very little. I remember I asked my dad when I was about seven if he could teach me to draw as good as he could. He would show me different techniques and I would spend hours practicing them,” Martin said.

Martin has been painting and drawing ever since. Today, she often uses her sketchbook for relaxation when she has time from her other pursuits which, in addition to advanced schoolwork, include football and basketball cheerleading, softball, golf, horseback riding, showing dairy cows and participating in LaPorte County 4-H.

The FIRE! exhibit, marking the 150th anniversary of the 1871 Chicago Fire, also includes eyewitness accounts of local blazes that happened that same year, pictures and news accounts of devastating downtown fires that struck New Buffalo (in 1962), Galien (two in 1971) and Three Oaks, along with early firefighting tools and uniforms from area firefighters, including the Tempest Brigade, Three Oaks’ original fire company that was formed in the aftermath of the 1871 the wildfires.

Museum Board member Nick Bogert said 1871 was filled with destructive fires throughout the Midwest as drought, high winds and large expanses dry brush left behind after many forests had been logged out resulted in blazes including one that went from Sawyer to New Troy and another that charred an area from New Buffalo to Avery (a former settlement between Three Oaks and Galien).

Bogert said the Chicago Fire happened within a month of the local blazes, and the region also saw downtown Holland burn to the ground. An inferno that took place in northern Wisconsin (Peshtigo was the epicenter) spreading into Michigan’s Upper Peninsula left 1,200 people dead.

In another corner of the museum the dental office from 103 South Elm has been recreated circa 1935. This scene will be familiar to many local residents with its patient chair, drill, spit stand and tool cabinet.

Bogert said the equipment was stored in the basement at 103 South Elm where Dr. Debra Mannia and her son, Paul Mannia, currently practice dentistry.

He said Dr. Frank Hinchman was the dentist at a house located there in the 1890s. Dr. T.H. MacKenzie built the current structure in 1935 and added the Ritter Dental equipment now on display in the museum.

Nearby is a display on local road names and the families behind them featuring historical information and photos on the Martin and Minnich families.

Bogert said the Martin’s have been holding well-attended family reunion picnics for more than 150 years.

On loan from Michigan State University for a second straight year is the Warren Calculating Engine, possibly the first functional mechanical calculator made in the USA Invented by local jeweler Fred Warren, this is its first appearance in Three Oaks in close to 70 years.

Other displays include greeting cards sent to and from the area dating as far back as the 1880s (including a 1924 Christmas card from the Studebaker Automotive Corporation) and “Faces from the Past” that visitors are asked to help identify. Another exhibit features quilts done by the Churchill women at the turn of the 20th Century in a period-furnished bedroom. A kitchen from the past, artifacts from the area’s native peoples, a Three Oaks High School “Oakers” room, and the Marxochime Colony of New Troy also are highlighted.

Another new attraction is the recently added 1870s mailbox from inside the Woodland House, a hotel that once stood near the railroad tracks where the bust of E.K. Warren is now located.

“Henry Chamberlain originally moved that building from New Buffalo,” Bogert said, adding it was the first general store in town as well.

Several exhibits have been enhanced and updated with additional narratives through QR code scans.

The Region of Three Oaks Museum presented a streaming “Artifactoids” program on April 21 with community members telling the stories behind unique items of local interest.

Judy Jackson related how her dad found what he later determined was a mammoth tooth in Harbert in the 1970s (it is on display in the museum).

Suzanne Levy described how a yellowed newspaper clipping led her down a twisted trail left by a missing Three Oaks’ village treasurer in the 1920s. Randy Miller set the scene created around a powder case carried by a Civil War soldier from Three Oaks. Dave Mannia drilled down on the history of the dental tools and equipment seen in the museum’s new exhibit. And Bogert introduced the FIRE! exhibit.

Bogert said the Artifactoids presentation should be available for viewing on the museum website in the near future.

The Region of Three Oaks Museum, located next to Acorn Theater, plans to be open Saturday and Sunday through October from noon to 5 p.m. (Eastern). For further information, visit the museum’s website, email trotommusuem@gmail.com or leave a message at 269-336-9688.