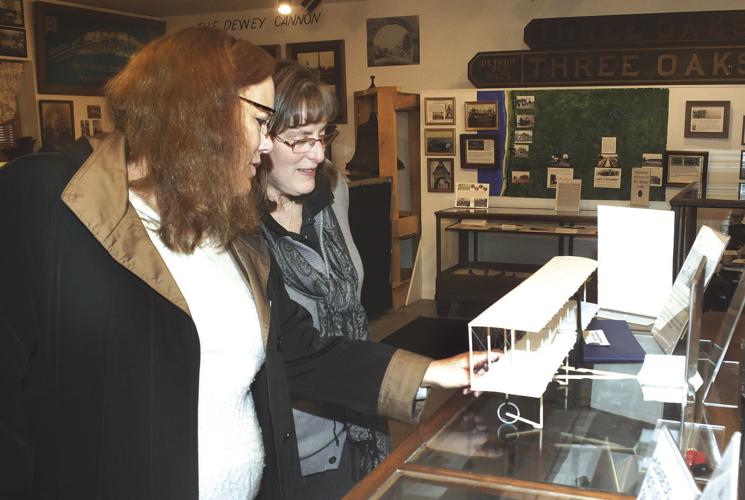 Susan Buckingham and Linda Frederickson check out a scale model of possibly the first airplane to take flight at the Region of Three Oaks Museum on April 22. 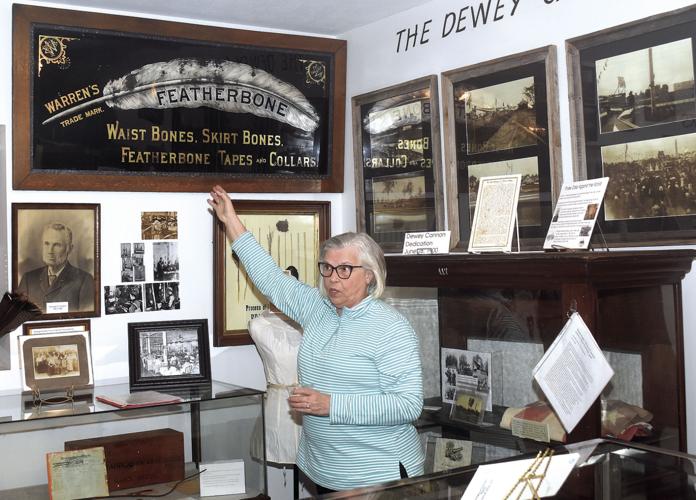 Judy Jackson points to the Warren’s Featherbone wall sign that has come home to the Region of Three Oaks Museum during an April 22 tour. 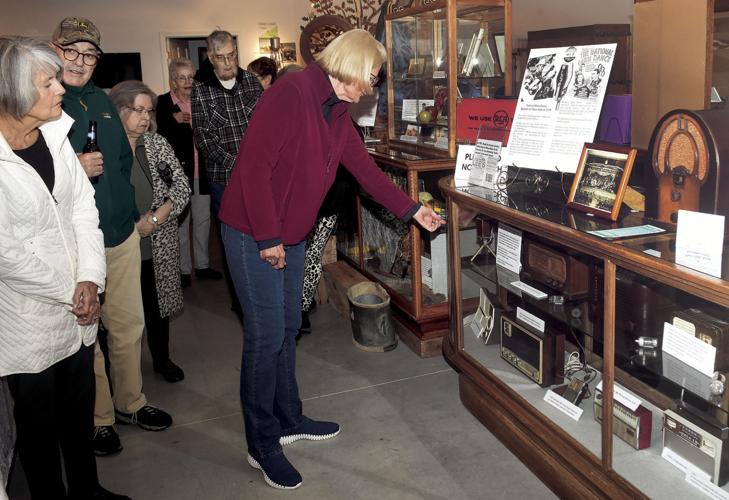 Sue Harsch talks about vintage radios during the April 22 tour of the Region of Three Oaks Museum. 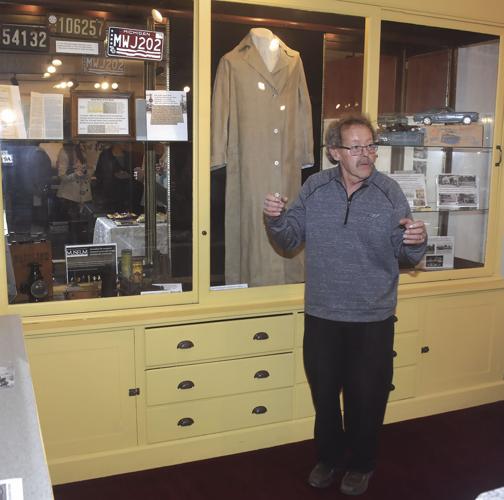 Chuck Sittig talks about the golden age of motoring in the Automobiles Room at the Region of Three Oaks Museum. 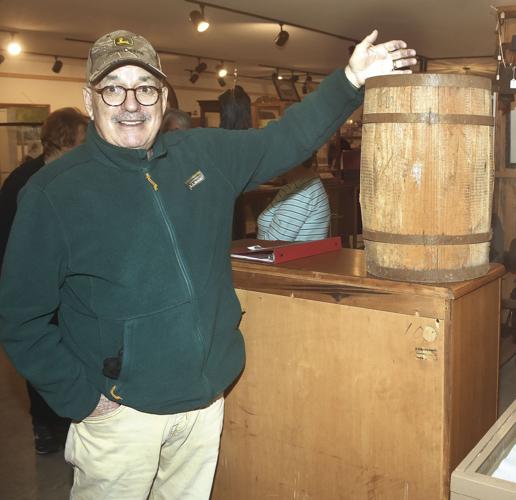 Kim Weber with a wooden barrel on display inside the Region of Three Oaks Museum just like the ones he used to use to hold ice fishing poles when he was a kid.

Susan Buckingham and Linda Frederickson check out a scale model of possibly the first airplane to take flight at the Region of Three Oaks Museum on April 22.

Judy Jackson points to the Warren’s Featherbone wall sign that has come home to the Region of Three Oaks Museum during an April 22 tour.

Sue Harsch talks about vintage radios during the April 22 tour of the Region of Three Oaks Museum.

Chuck Sittig talks about the golden age of motoring in the Automobiles Room at the Region of Three Oaks Museum.

Kim Weber with a wooden barrel on display inside the Region of Three Oaks Museum just like the ones he used to use to hold ice fishing poles when he was a kid.

THREE OAKS — The Region of Three Oaks Museum will re-open for the 2022 season on Friday, April 29, but Judy Jackson, one of the museum’s founding directors and an active volunteer, led a tour of new and existing exhibits during an April 22 preview gathering.

The first new display she introduced focuses on historic resorts in the area including the Golfmore Hotel in Grand Beach, Michigan’s second-largest hotel in the 1920s that had its own ski jump.

“They had spas and saunas, and of course Lake Michigan,” Jackson said, noting that a wood model of the Golfmore Hotel made by Tom Suhs is part of the display (his model of a Lake Michigan freighter is on display elsewhere in the museum).

During a 2018 presentation on the Golfmore at the New Buffalo Library, Suhs said the hotel’s nearly 20-year run ended on Nov. 19, 1939, when it was destroyed by fire. Construction began in 1921 and was completed in 1922. Suhs said the finished product contained 175 rooms and could handle 500 guests.

In its heyday the Golfmore included a golf course, the ski jump run that straddled a dune, and a dining hall reached by a bridge spanning a small creek. Horseback riding and visits by celebrities including golfer Chick Evans and boxer James “Cinderella Man” Braddock are part of the hotel’s lore.

occupant leaving only their head exposed is at the center of the Resorts display.

Jackson said Arthur Aylesworth, a former owner of the Lakeside Inn, was a colorful character who had acted in films, had bears, a pet raccoons and peacocks on site, and possibly now haunts the Inn with the ghost of one of his wives.

During a recent Lakeside Association History Tour it was noted that a woman who stayed at the Lakeside Inn for a wedding reported seeing the ghost of Aylesworth himself complete with a raccoon on his shoulder.

Resorts of Union Pier with a Lithuanian flavor (such as the Gintaras Resort which is still in business) or catering to the Czechoslavakian community (including the Vavra’s Resort) also have a wall in the Resorts Room.

One of the hand pumps used to get water for cabins at Vavra’s Resort is on display.

Another Union Pier resort still operating is the Gordon Beach Inn. Jackson said it is a Michigan Historical Site, and in the 1960s when it was owned by a black family a firebombing attack occurred.

A trio of displays on Planes, Trains, and Automobiles are new for 2022.

The Planes area includes a hand-built model replica of an early airplane that took flight five years before the Wright brothers that was overshadowed by a presidential visit.

Jackson said the weekend President William McKinley came to Three Oaks in 1899 (to dedicate the park where the Dewey Cannon is located) coincided with several brief motorized flights on the beach in St. Joseph by Augustus Herring.

“He didn’t get the publicity that he should have,” she said.

The model was made by Three Oaks native Bob Stanage.

Also featured in the aerial history display is a bizarre incident involving New Troy resident Victor Woodrick that earned a mention (complete with an animated re-creation) in Ripley’s Believe-it-or-Not.

Jackson said during World War II Woodrick was training to be an Air Force pilot in St. Louis. During a flight (he was in the back seat of the plane not wearing the seat belt).

He was thrown from the PT-19 Fairchild when it hit an air pocket, did a backward somersault, and landed astride the plane’s tail facing backwards.

“I think a year or so later Ripley’s Believe-it-or-Not contacted him,” Jackson said.

The display on Trains includes railroad lights and a map showing the routes including one that ran between locales such as Sawyer, Harbert, Lakeside, Union Pier New Buffalo and Grand Beach.

Jackson said the railroads came to the area to haul lumber to Lake Michigan where they were shipped to Chicago.

In the Automotive Room there is a like-new model of a Ford Mustang recently donated by Helen Williamson, photos of classic cars, information on local dealerships and early car makers, an original car coat on loan from Michigan State, license plates and kerosene headlights from yesteryear.

“In 1910 Jane Adams drove her car (from Chicago) to New Buffalo, and it only took five hours,” noted Museum Board President Chuck Sittig.

Sue Harsch talked about the Radio Display, which includes many classic models from her late father-in-law’s collection, as well as some donated by others and information on the National Barn Dance and WLS.

She pointed out a “very old crystal radio receiver,” alongside slightly newer tube radios and transistor ones.

“Probably … everybody here remembers having a little transistor radio with the little ear things, going down to the beach and listening to the music,” she said.

Recently donated is a handmade beaded Indian costume worn during the 1967 Three Oaks Centennial celebration. Jackson said the museum’s next goal is to try and get a headdress made to replicate the one in historical photos.

Serving as a sort of exclamation point for the 2022 Region of Three Oaks Museum season is the long-awaited arrival of a sparkling “Warren’s Featherbone” framed glass sign from the Michigan State University Museum that Jackson said is “home to stay.”

“After much debating and talking and praying, we have the sign home, and they have given it to us. We’re all real excited about that.”

Ongoing exhibits include a Music Room (new for 2022 is a squeezebox from the Chicago World’s Fair); The Bedroom (with the addition of a vintage wedding dress and photo of the bride who wore it); a recreation of the dental office from 103 South Elm circa 1935 (on loan for one more year); the Agriculture Display (basically unchanged since it opened); and the final year FIRE!, a look at area blazes of the past and the teams and equipment that fought them.

The regular Region of Three Oaks Museum schedule is Friday through Sunday, noon to 5 p.m. through the end of October. Admission to the facility at 5 Featherbone Ave. is free, though donations are encouraged.

Opening weekend at the Region of Three Oaks Museum coincides with Art Attack, and the museum’s Heritage Hall, at 8 E. Linden Street in Three Oaks, is on the art map. A St. Jude’s Children’s Hospital Benefit with local artists displaying their work and 100 percent of sales going to the hospital. There also will be a display on the history of Art Attack.