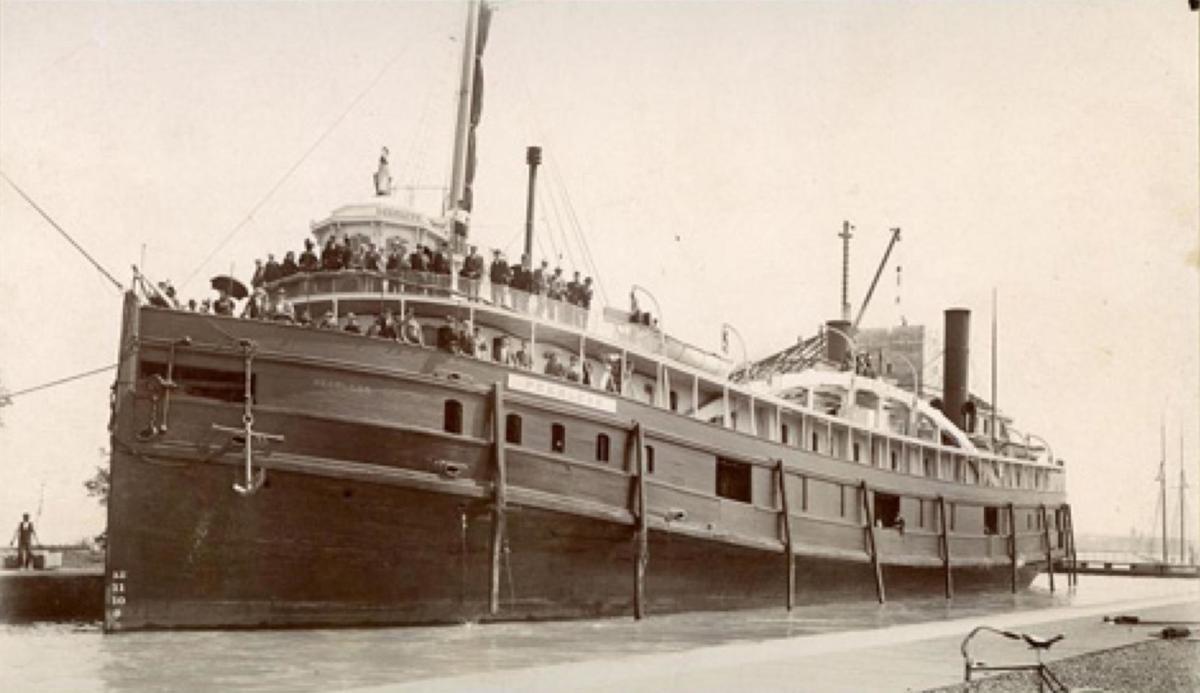 A historical photo shows the Muskegon, which caught fire and burned while docked in Michigan City, Ind., in October 1910. The wreckage was later hauled out into Lake Michigan and submerged about a quarter mile offshore. 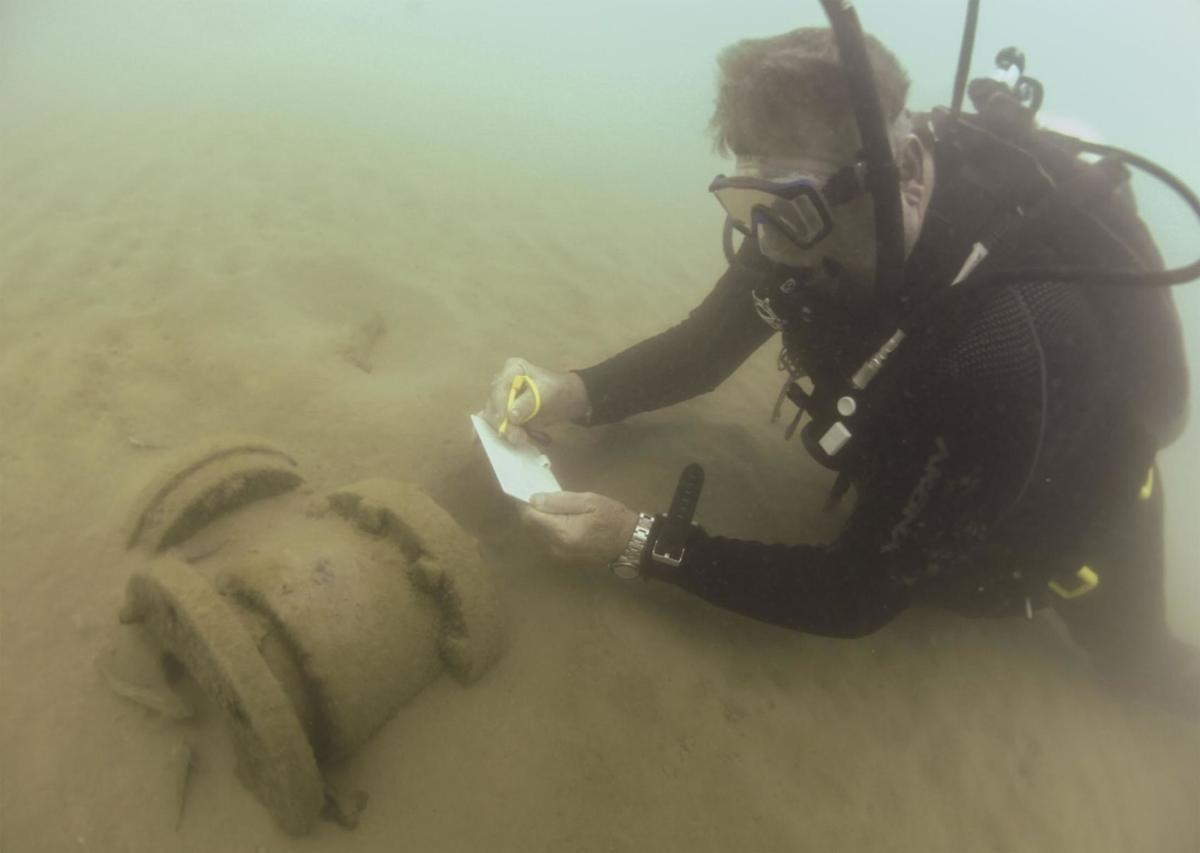 An Indiana University diver inspects the remains of the Muskegon. The IU Center for Underwater Science is nominating the Muskegon as Indiana’s second underwater shipwreck preserve. 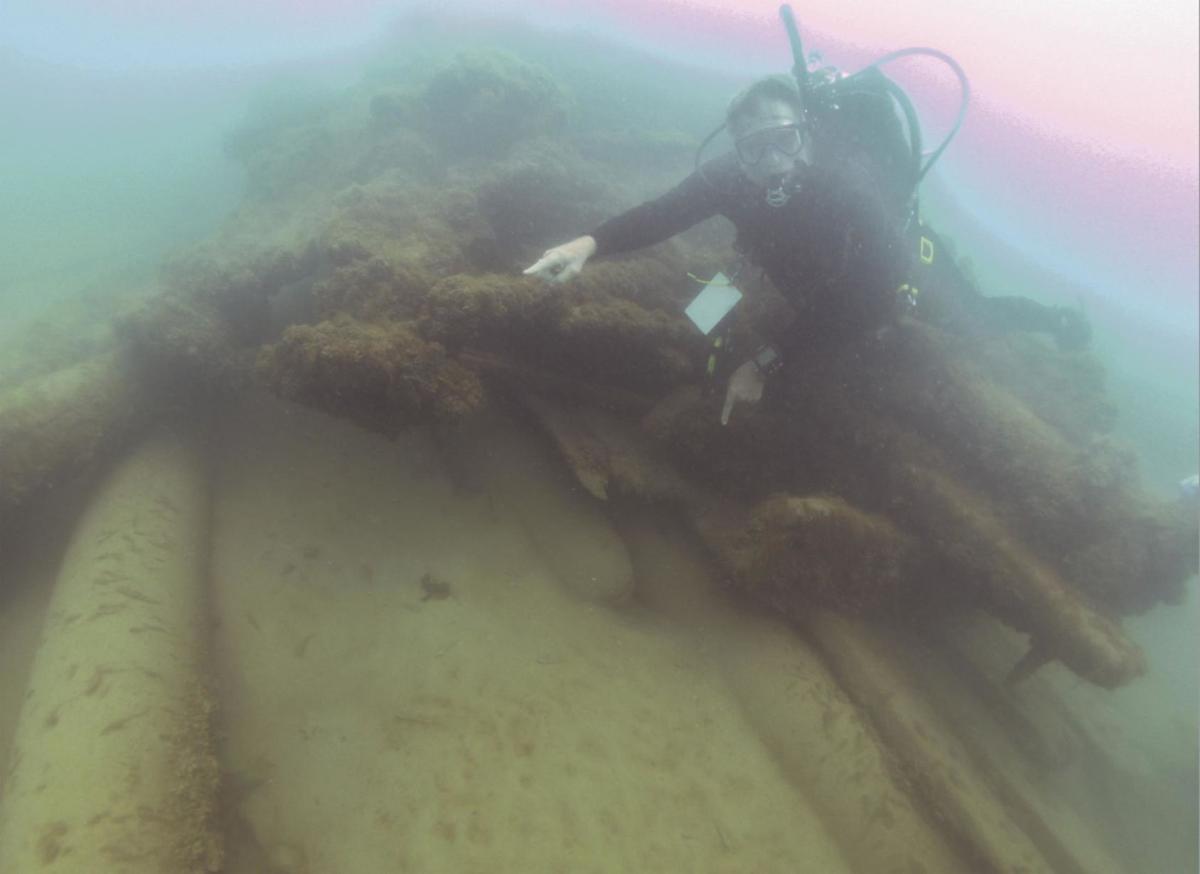 Major segments of the Muskegon’s main frame and side walls, steam engine, twin boilers, Bishop Arch assemblies, propeller and drive shaft remain visible to divers 110 years after it was submerged. 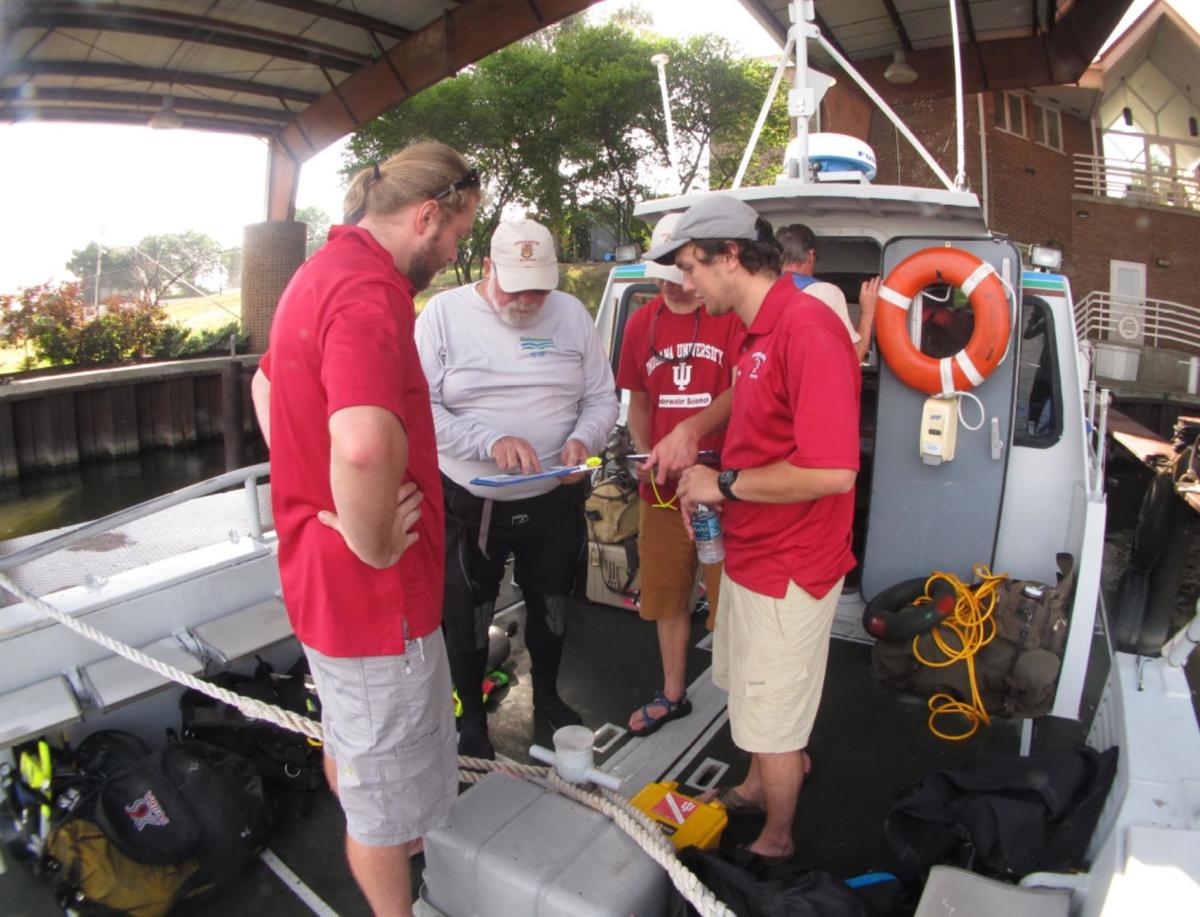 A historical photo shows the Muskegon, which caught fire and burned while docked in Michigan City, Ind., in October 1910. The wreckage was later hauled out into Lake Michigan and submerged about a quarter mile offshore.

An Indiana University diver inspects the remains of the Muskegon. The IU Center for Underwater Science is nominating the Muskegon as Indiana’s second underwater shipwreck preserve.

Major segments of the Muskegon’s main frame and side walls, steam engine, twin boilers, Bishop Arch assemblies, propeller and drive shaft remain visible to divers 110 years after it was submerged.

MICHIGAN CITY, Ind. — A shipwreck off the shores of Mount Baldy in Michigan City, Ind., that few people even realize is there could become Indiana’s second underwater nature preserve.

According to researcher Charles D. Beeker, the Muskegon began its life as the 1,199-gross-ton, 211-foot steel-hulled passenger freighter Peerless, with a 39.9-foot-beam and 12.5-foot draft. It was built in 1872 in Cleveland.

The ship operated on the Great Lakes as a lumber-hooker, dredger (or “sand sucker”) and passenger liner. It was renamed Muskegon after the Indiana Transportation Co. purchased it.

On Oct. 6, 1910, while tied to the company dock in Michigan City, the Muskegon caught fire and burned nearly to the waterline. The wreckage later was towed about a quarter mile off the shores of Mount Baldy, and sunk in 35 feet of water.

According to Beeker, the wreck is important because “it represents significant innovations in commerce, engineering, industry and transportation within Indiana waters and the Great Lakes.”

The wreck was rediscovered by recreational divers in the 1960s and became “Indiana’s first shipwreck to be successfully accepted to the National Register of Historic Places for its 19th century contributions to Great Lakes maritime innovation and technology,” Beeker said.

Because of its shallow depth, the wreckage site is an exceptional venue for recreational diving, he said, provided divers are trained for low-visibility environments.

“While much of the superstructure of the ship was destroyed in the fire, a great deal of the ship remains to be explored by divers,” Beeker said. “Major segments of the ship’s main frame and side walls, steam engine, twin boilers, Bishop Arch assemblies, propeller and drive shaft” remain intact.

Beeker, the director of the Center for Underwater Science at Indiana University, will speak at 1 p.m. (Central Time) Sept. 11 at Michigan City Public Library during a program celebrating the Muskegon’s nomination as Indiana’s second “Shipwreck Nature Preserve.”

The program will include a talk and slideshow highlighting features of the shipwreck, and why it’s important to preserve the site.

The nearby J.D. Marshall was the state’s first shipwreck preserve. In September 2013, several agencies came together at Indiana Dunes State Park in Chesterton to mark its dedication about 600 yards offshore.

The Marshall was a wooden, 154-foot, steam-powered, sand-sucker barge that sank in June 1911, taking the lives of four crew members.

The preserve, approved by the National Resource Commission, covers approximately 100 acres, and is marked each spring by buoys at the corners and along the northern edge. Fishing and paddling is allowed by boat in the boundaries, however, anchoring is prohibited to protect the structure.

Divers can enter the water to view the ship, but must follow rules set by the DNR for environmental preservation and be familiar with the site before diving. All items in the preserve are property of the state and removing them is prohibited.

An ironic twist is that the Marshall was destroyed while performing salvage on the Muskegon.

Built in 1891 in South Haven, the Marshall was designed for hauling timber. It was later purchased by the Independent Sand and Gravel Co., and converted to a sand sucker for transporting sand and other material to help build Chicago.

The same company owned the Muskegon, which stayed docked in Michigan City until residents got tired of seeing the burned out hull.

On June 10, 1911, a 10-member crew under the command of Capt. Leroy Rand loaded the Marshall with 1,000 tons of sand, pig iron and other supplies from the Muskegon. It was carrying the cargo to Chicago when a leak sprung in the hull. It set anchor close to the current Indiana Dunes State Park for repairs.

When it departed a second time, an intense squall sprang up just before 1 a.m., and rocked the boat so hard it “turned turtle,” or flipped over, and sank.

Rand swam to shore and took a small john boat back to look for surviving crew members. Three were trapped at the bottom of the boat. Another washed up on shore a few days later almost 2 miles away.

The Marshall was rediscovered in 1979, and a few years later, in 1982, an illegal attempt was made to raise it for scrap. The salvagers were caught by the U.S. Coast Guard, and the remnants sank back to the bottom.

“The J.D. Marshall and Muskegon represent two historic shipwrecks significant to the maritime heritage of Michigan City,” Beeker said, “and deserve to be promoted and protected as nature preserves.”

Sorry, there are no recent results for popular articles.

Sorry, there are no recent results for popular images.