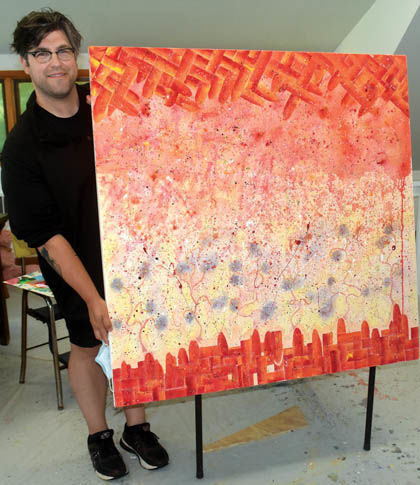 Rossa Crean in the Lakeside Inn studio with his recently completed. “Saffron.” The resident artist has found plenty of inspiration during the lockdown period. 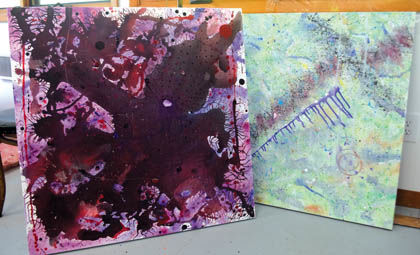 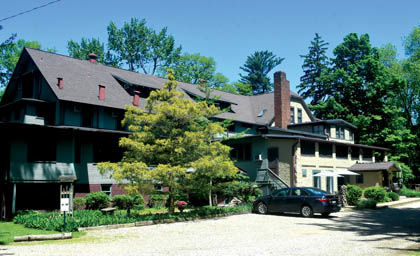 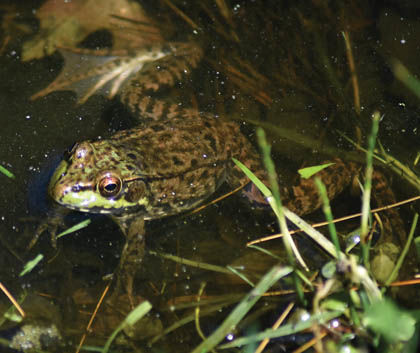 A frog in the pond next to the art studios at the Lakeside Inn. 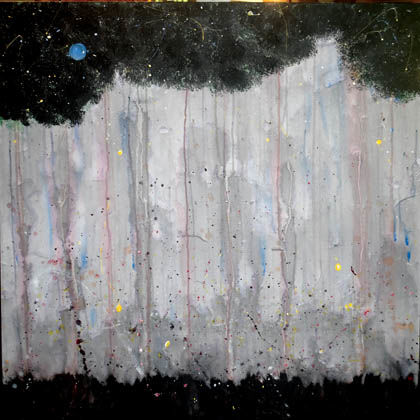 “In the Garden of the Elusive Francine.”

Rossa Crean in the Lakeside Inn studio with his recently completed. “Saffron.” The resident artist has found plenty of inspiration during the lockdown period.

A frog in the pond next to the art studios at the Lakeside Inn.

“In the Garden of the Elusive Francine.”

LAKESIDE — The coronavirus lockdown of the last few months has served as a time of discovery and creation for Lakeside Inn artist in residence Rosśa Crean.

“There’s definitely loneliness in a lot of what’s happened, but I think there’s been a lot of beauty in the chaos too,” he said in late May as things were just beginning to open up.

The multimedia artist, singer and musician (a resident of Chicago) has been working on his art at the historic inn since August 2019.

Crean said he was originally scheduled to do live painting demonstrations during the 2020 Harbor Country Art Attack before the pandemic struck (the annual event was postponed from the spring and may take place later this year).

He was isolated at the Inn for over two months after a month in Chicago where he said people weren’t respecting the six-foot rule. During his first week back in Lakeside, Crean said there was just one person staying at the Inn who was doing work related to the pandemic.

“It’s a lot safer here and it’s a lot more peaceful here. And they definitely have the resources to keep my creativity going, which has been really healing,” he said.

The solitude has sparked creativity in different forms for Crean, who decided to record an album there — “A Lonely Voice in These Empty Rooms: Songs in Quarantine.”

“I went to Room 13 and was recording … I just love the idea of being able to record here with the open space and history of this place.”

A mixture of all kinds of music including Celtic traditional singing, some French and English tunes, acapella voice numbers, experimental music based on a fictional language created by H.P. Lovecraft along with sub-harmonic and multi-phonic vocals.

“I felt like it paralleled the experience of isolation here,” Crean noted.

He also has created art during his “lockdown” time at the Lakeside Inn.

He recently won the American Prize for Opera Performance for his “The Great God Pan” that premiered in Chicago in 2018.

Crean said he has a form of synesthesia called chromesthesia which means he sees color and sound. He often paints while music is playing and puts down what he is visually seeing.

“I see everything as it is, but I see a filter of moving colors. It’s not just music, it’s the birds chirping, it’s chairs creaking, it’s doors slamming, it’s people’s voices — everything has different colors and combinations and different ways that it moves.”

On a sunny spring afternoon one of his latest works. “White Rhino,” (an acrylic and water painting on a 4- by 5-foot canvas)was drying outside near the pond. It is on virtual display at Happy Gallery in Chicago.

Crean recently finished a commission piece (“The Calmest Light”) that will be on display in the renovated Little Gallery at the Lakeside Inn.

Other paintings that Crean has created during the lockdown period at the Inn include “Quarantine,” “Nightingale,” “Ascension,” and “Saffron” (which he said was inspired by his recent purchase of saffron flower “and the colors just really inspired me.”

On display inside the Lakeside Inn are pre-quarantine works including: “The Rift,” “Ghost Forest” (inspired by an October 2019 concert at the Inn by Mag Baird and Mary Lattimore) and “In the Garden of the Elusive Francine.”

Crean said he welcomes people’s interpretations of his art.

“I have my idea of what I was doing when I created it … but I love that they can come up here and look at my work and see things that I had no intention of creating,” he said. “I think that’s just an amazing thing. I would rather be able to have it be a collaborative experience with people’s perspectives on each piece rather than me just saying ‘this is what it’s about.’”

Crean said people have had some “really strong reactions” to some of his recent pieces — “I feel like this is how I get to reach people.

Crean conducted Zoom music lessons in Lakeside during the lockdown, and is now offering art lessons at the Inn.

“We had a lot of plans for the Inn this summer, and we want to see what we can keep rolling in order to benefit the Inn and the community here.”

Group lessons with Crean are being offered on Saturdays and Sundays this summer both in-person and online (the Inn is equipped for social distancing) and online individual instruction also can be arranged. For more information, call (708) 439-0564.

Crean said the art studio in a building located behind the main Inn is being transformed and they hope to eventually establish an residency program for artists. There also are residences (including apartments occupied by Crean and the night innkeeper.

One of his favorite parts of the grounds is the area surrounding a pond between the Inn and the studio/residence building.

As for the oft-told tale of a resident ghost at the Inn, Crean said the first time he stayed at the Inn was in a room thought to sometimes have an extra guest.

“I have had my door rattled a few times when I was up there — If we do have a ghost I don’t believe she means any harm.”

During Christmas week (when he was hosting a holiday movie marathon) Crean said he was in the kitchen making chili.

“If I’m in the kitchen too long I know the pantry door opens by itself sometimes.”