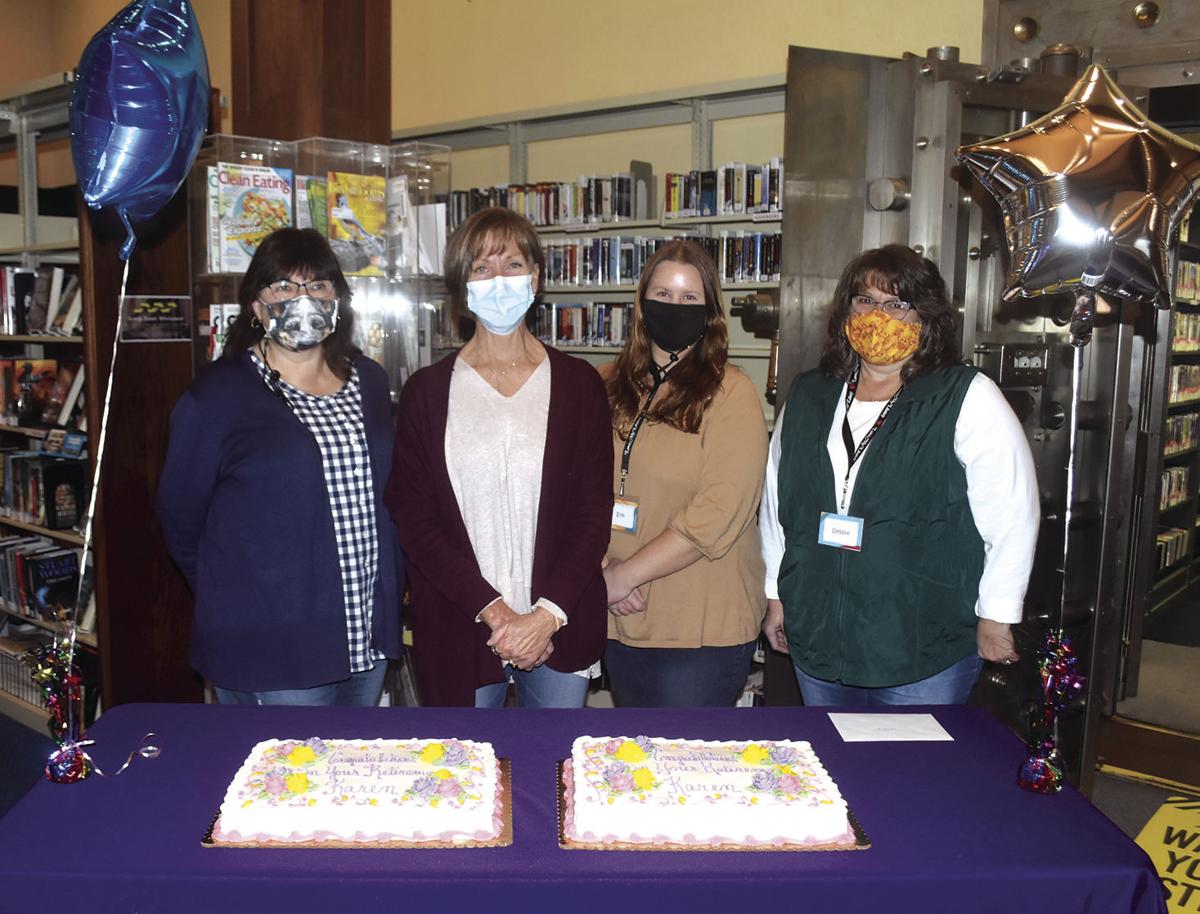 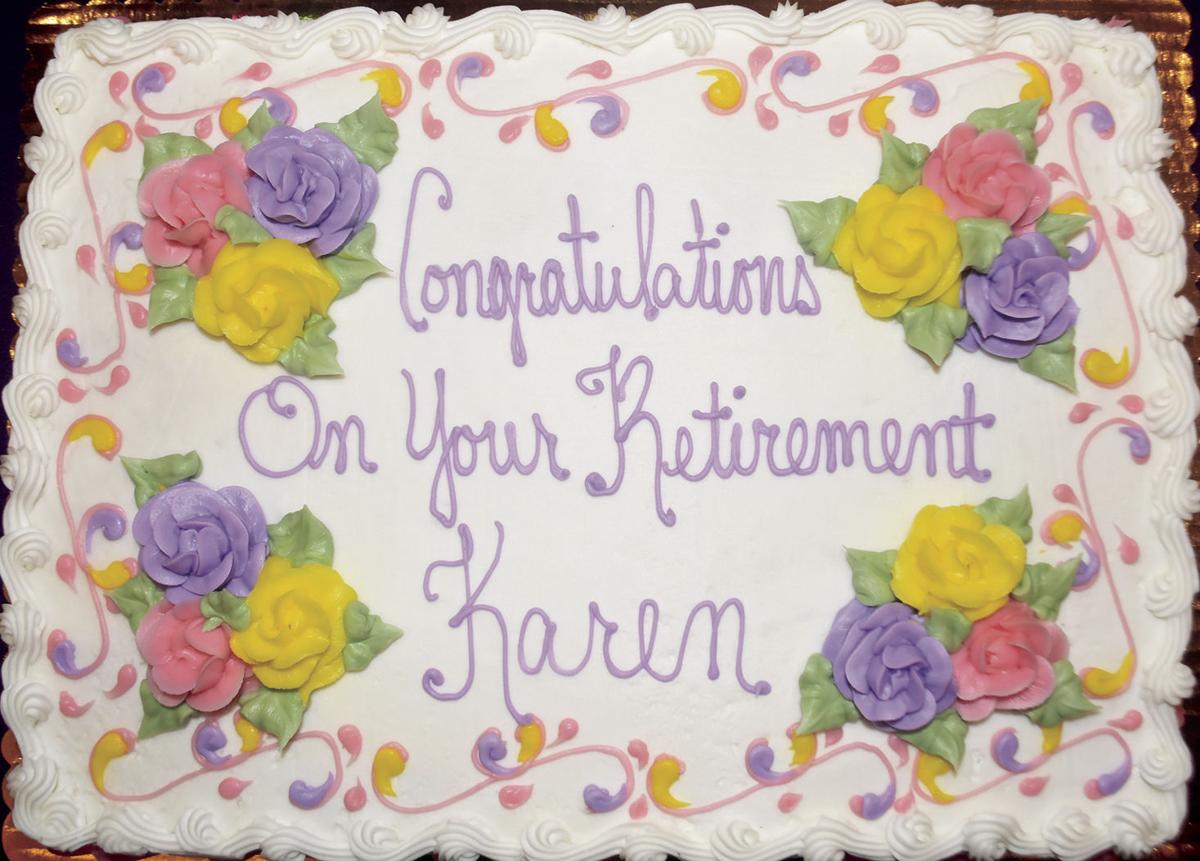 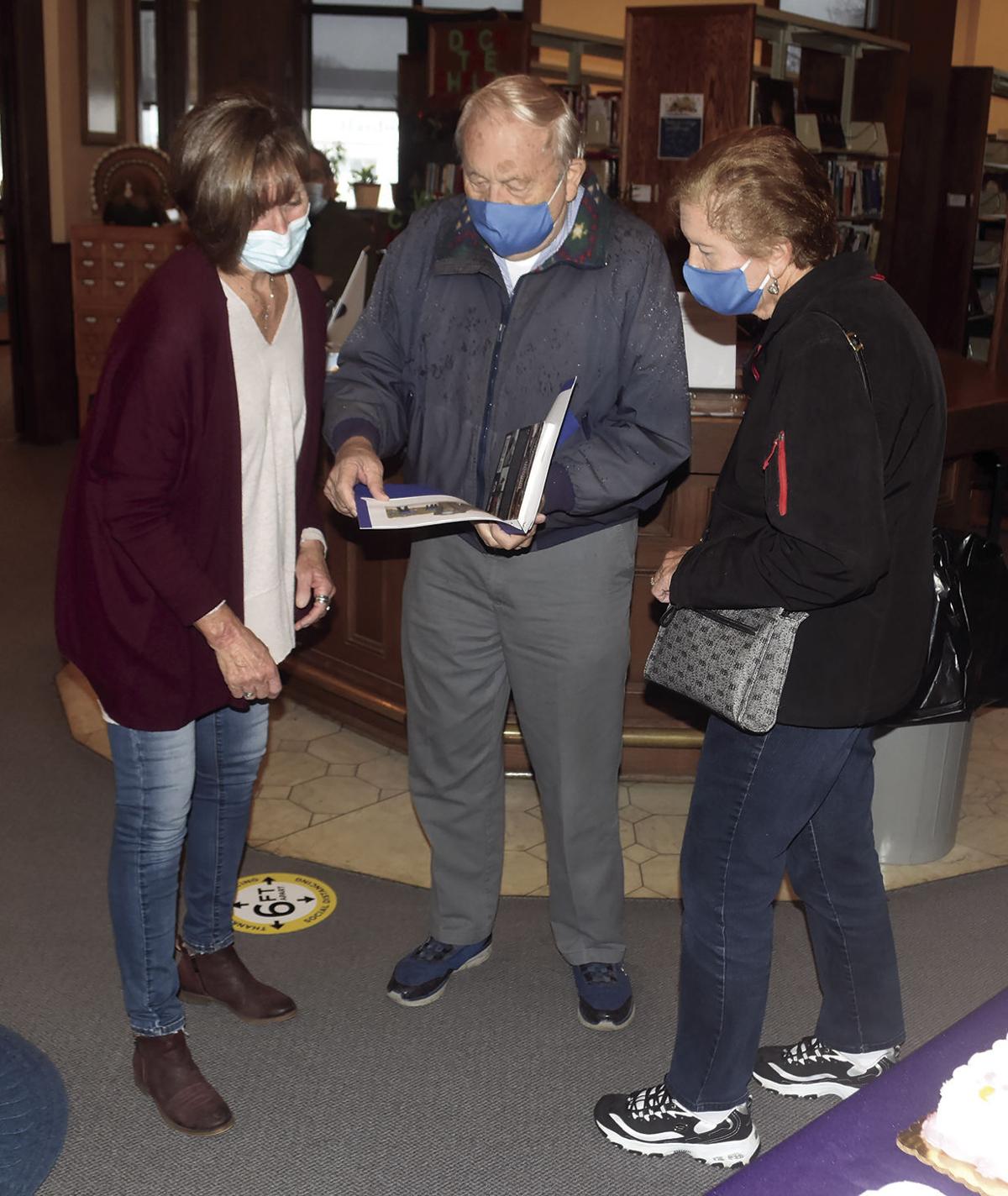 Karen Lubarski goes over some local history with Charlie and Mary Klute during her retirement party.

Karen Lubarski goes over some local history with Charlie and Mary Klute during her retirement party.

Her last day before retirement was Nov. 25, and a celebration involving cake and well-wishers was held that day to bid Lubarski a fond farewell

Lubarski said she first worked at the front desk in 2007. In 2013 she began learning from library historian and genealogist Jane Ward (described as a gracious teacher).

In 2016, after Ward passed away, Lubarski took over the day-to-day running of the Jane Ward Genealogy Room and Local History Room at the library, and has continued to expand her knowledge.

According to a release from the library, “Over the years Karen has worked countless hours at the circulation desk assisting patrons, cataloging items, and performing a myriad of library tasks all with her contagious smile.”

Lubarski said her genealogy resources include “a lot of old newspapers.”

“I always like to start with an obituary because there’s lots of information in an obituary – birth, death, parents’ names,” she said. “There’s also newspaper articles.”

Lubarski said her research has intersected with some interesting old murder cases including the early 20th Century case of Thomas Payne, who shot his wife, but claimed he had been trying to wrestle the gun away from her after she shot at him.

“He got convicted, but then they didn’t send him to prison because of his age,” she said. “A lot of the area people stood up and said they didn’t want to se him go to jail, and he didn’t (although he only lived another year or so before passing away).”

Lubarski said a lot of people don’t know who their ancestors are, noting that she recently met with a library patron who wishes she’d asked her grandparents more questions while they were still around since she doesn’t know her grandmother’s parents’ names or where they were from.

“I like looking for people’s families because it’s kind of like solving a puzzle. It’s always interesting what you find,” she said.

Another aspect of local history that Lubarski said a lot of people come to the library to explore involves the backstory of their houses.

“Especially along Elm Street and the bigger houses down here, they want to know who lived there before they did or who originally built it.”

Lubarski added that business people also are often interested in the history of their location in the community.

She said members of the Warren family were involved in a lot of local history involving homes and buildings.

“I was surprised that when the Featherbone (Company) was in operation how many homeowners were renting out rooms to people who worked (there),” she said.

The Three Oaks Township Public Library itself is located within one of the village’s most historic structures – the headquarters of the Warren Featherbone Company from 1905 to 1928. The Chamberlain Memorial Museum occupied the E.K Warren Building from 1928 to 1952, honoring the memory of Three Oaks founder Harry Chamberlain. In 1952, the museum was donated to Michigan State University (some of that collection is now displayed at the nearby Region of Three Oaks Museum), the library was moved to a smaller structure, and the building fell into disrepair before it was purchased by the Bank of Three Oaksin 1982. Under the direction of Larry Bubb, over $1 million was spent in restoration and the building was placed on the National Register of Historic Places.It was home to various banks until 1999 when the Library and Three Oaks Township entered into an agreement to purchase the building from Fifth-Third Bank.

The library moved there in January of 2000, with a community “bucket brigade” style effort transferring many books and other items from a structure that once stood between the fire station and Three Oaks Elementary.

Those seeking genealogical and historical information at the library will now be referred to Erin Przybylinski, who has been working with Lubarski since August.

“I’m excited, and Karen has been a great teacher, and we’re all going to miss her very much,” said Przybylinski (a 1998 River Valley High School graduate who also attended Grand Valley State University) said.

Karen and her husband, Tom, plan to stay at their nearby farm where she will work on raising and selling perennials such as hostas, daylilies and grasses.

According to the library website, “These temporary hours are based on circulation metrics and Covid-19 numbers. Masks are required at all times. Please limit the size of your group and limit your visit to one hour. Computer time is limited to one hour per day, per patron. Patrons are expected to adhere to social distancing and remain six feet away from others not in their household. Curbside service is still available. To place requests: call 756-5621 and we will get your order ready for you.”