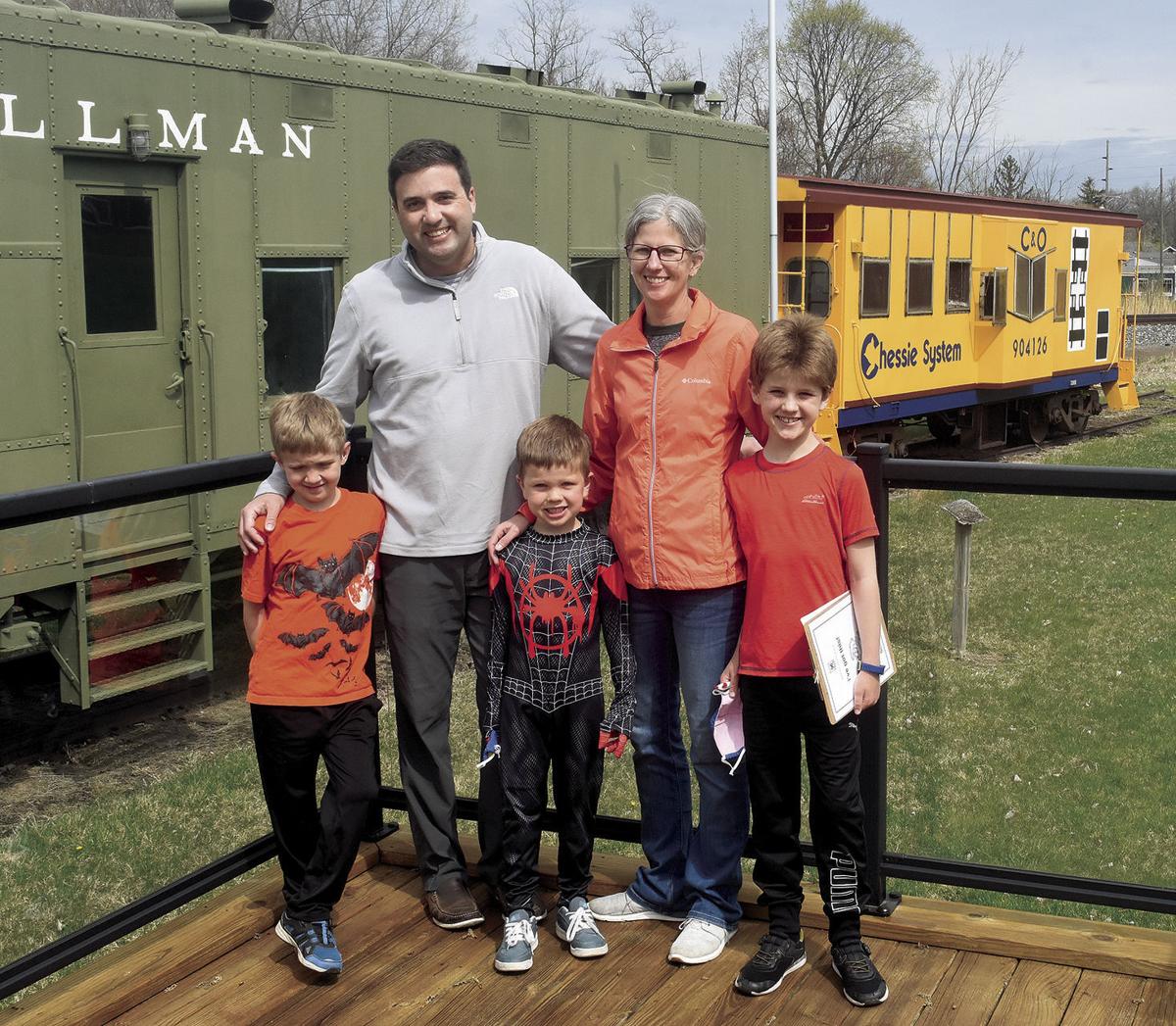 Enjoying an April 10 visit to the New Buffalo Railroad Museum are members of the Brunner family: (front row, from left) Mark, Thomas, George and (back row) Brad and Karen. 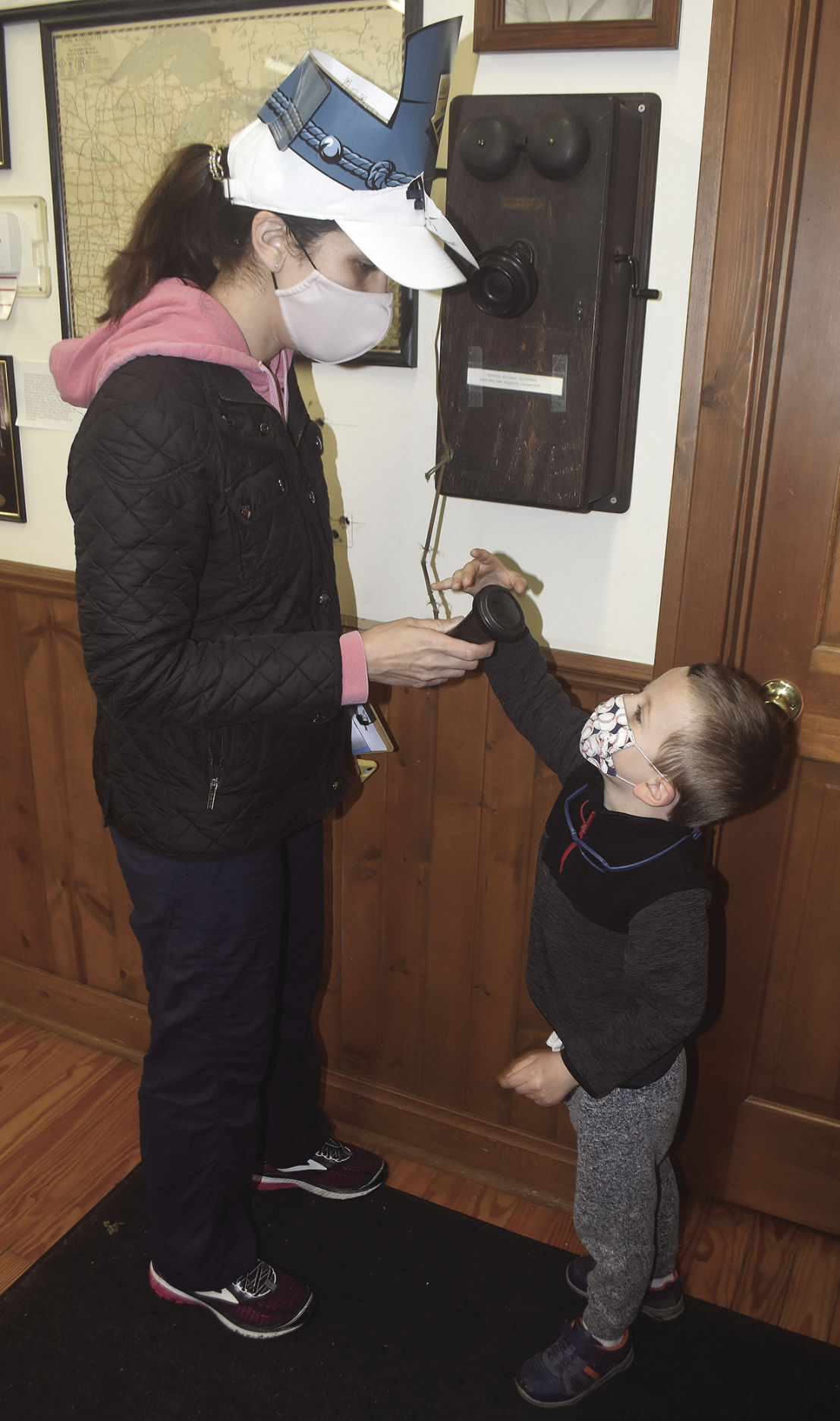 Sally and James Rose check out a vintage telephone inside the New Buffalo Railroad Museum on Saturday, April 10. 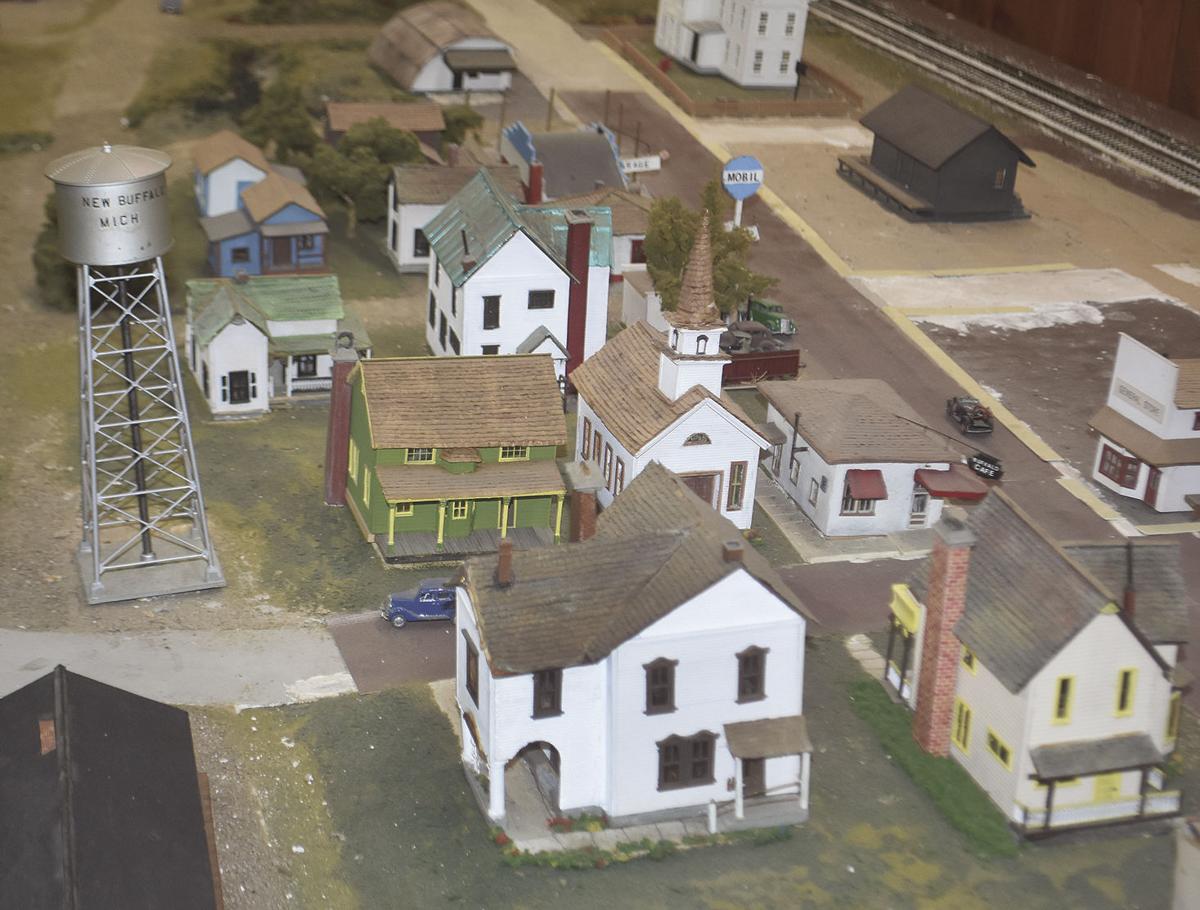 A portion of the model railroad layout inside the Railroad Museum depicting New Buffalo in the 1920s. 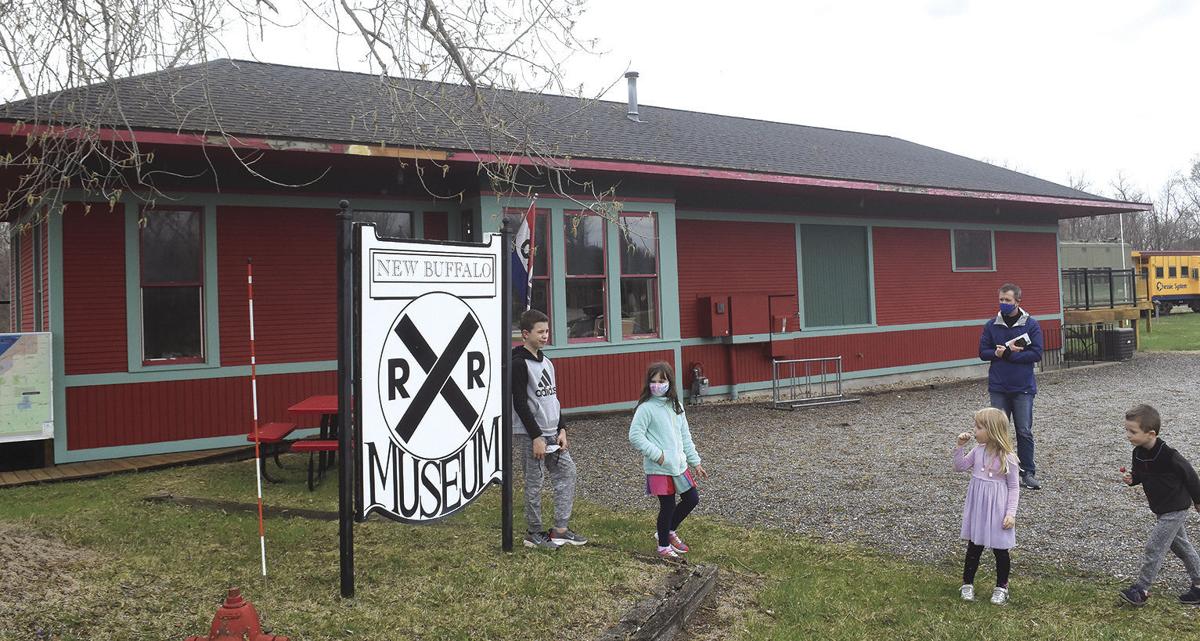 An exterior view of the New Buffalo Railroad Museum, which is a replica of a Pere Marquette Depot. 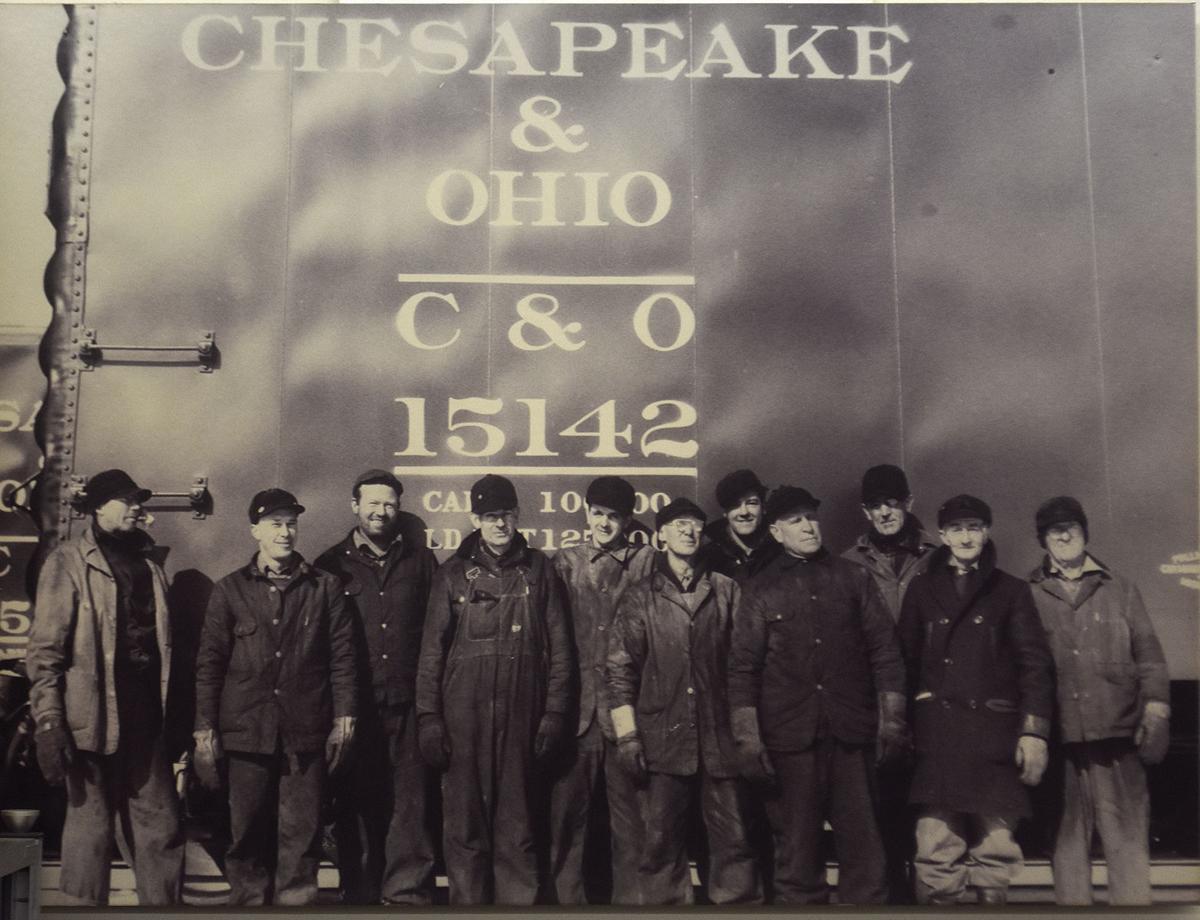 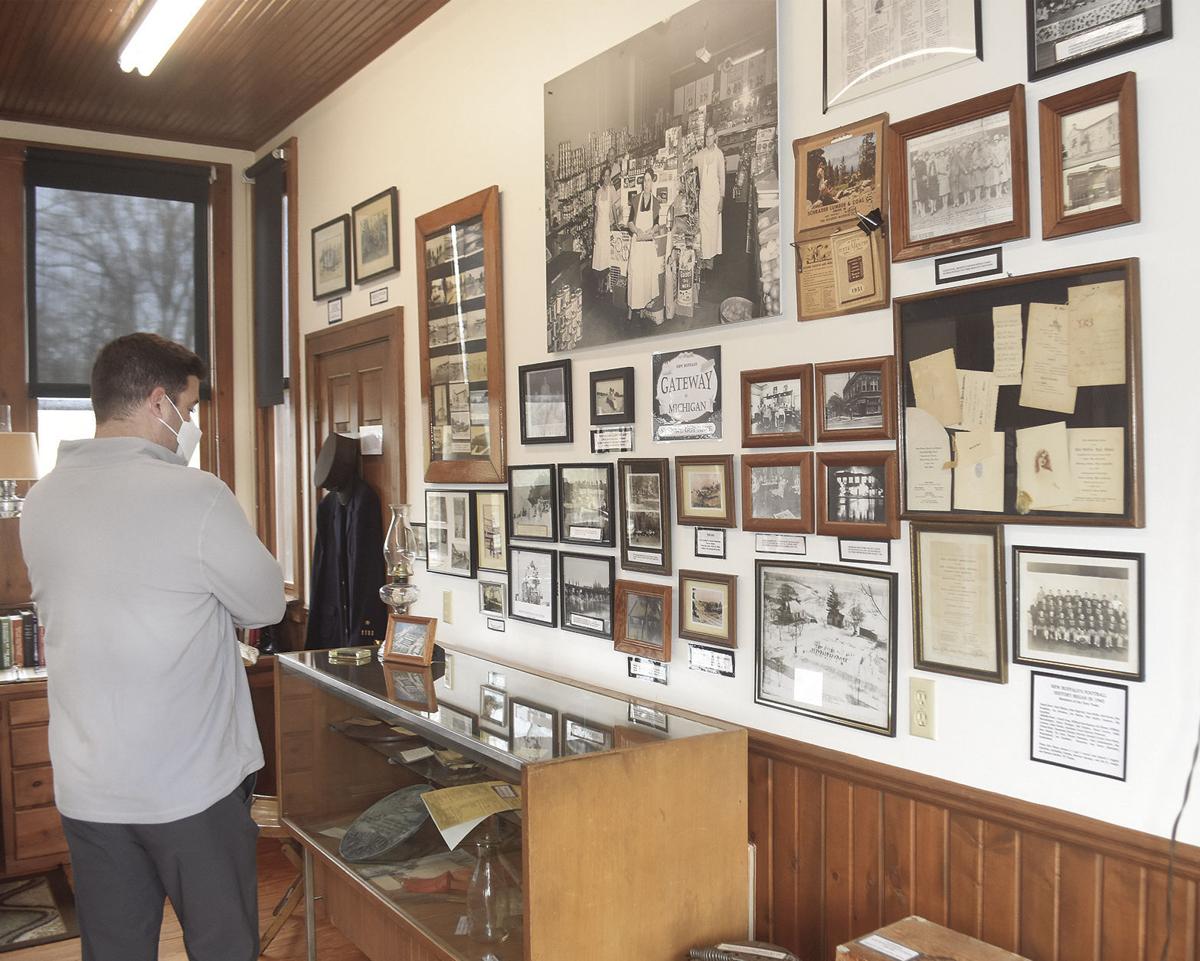 A wall of historical information inside the New Buffalo Railroad Museum.

Enjoying an April 10 visit to the New Buffalo Railroad Museum are members of the Brunner family: (front row, from left) Mark, Thomas, George and (back row) Brad and Karen.

Sally and James Rose check out a vintage telephone inside the New Buffalo Railroad Museum on Saturday, April 10.

A portion of the model railroad layout inside the Railroad Museum depicting New Buffalo in the 1920s.

An exterior view of the New Buffalo Railroad Museum, which is a replica of a Pere Marquette Depot.

A wall of historical information inside the New Buffalo Railroad Museum.

NEW BUFFALO — The New Buffalo Railroad Museum opened for the first time since October 2019 at noon on Saturday, April 10, and there were some new exhibits to explore, including a restored Chesapeake & Ohio 904126 Caboose which can be viewed both outside and inside (by passing through a Chessie box car and a Pullman troop sleeper car).

Nancy Kennedy welcomed visitors which included two families and a total of 14 people in the first 15 minutes. She said the museum, located at 530 S. Whittaker St. in New Buffalo, is open on Saturday and Sunday (as well as holidays such as the Fourth of July and Memorial Day and Labor Day) from noon to 5 p.m. through late October.

“We’re excited to be open again,” she said. “We’ve had things repainted, we’ve added a caboose … and we have a new display that’s coming up. We will be adding things into the cars.”

Founded in 1989, the Museum not only exhibits artifacts relating to the rail industry, it houses items of historic interest and value to the greater New Buffalo area. Most of the items in the museum have been donated or loaned by area residents. Many of these people, or their ancestors, worked in New Buffalo for the Pere Marquette Railroad, which eventually became the Chesapeake & Ohio and, finally, CSX.

Located on the grounds of what was once the largest train yard in Southwest Michigan, the Museum is home to exhibits and collections recalling New Buffalo’s heritage as a railroad hub. The rail line behind the museum still carries CSX freight trains through the stanchions of one of the original coal towers.

The Board of Directors of the New Buffalo Railroad Museum recently received a $7,000 grant to support General Operations for the 2021 Season from The Pokagon Fund (the grant required a $3,500 match, which was received from an anonymous donor). In addition to purchasing personal protection supplies to fulfill restrictions required due to COVID-19, the Museum will use the funds for ongoing expenses so that visitors can still visit free-of-charge.

Kennedy said the caboose was recently painted and refurbished thanks to The Pokagon Fund.

CSX Transportation donated the caboose in an “as is” condition subject to it being relocated from Holland, Michigan, to the Museum site. The Pokagon Fund Board of Directors granted a conditional $5,000 grant to support the costs of relocation and refurbishment of the caboose as a permanent display, with many local donations making the dream a reality.

Kennedy said the New Buffalo Railroad Museum building is a replica of the original Pere Marquette Depot which used to be located across the street on the other side of the tracks.

The original plans were discovered by life-long New Buffalo area residents Nadra and Al Kissman and Ron and Rol Oselka and the building was built from those original blueprints.

The first room you come to inside was originally the lobby (complete with ticket sale windows). A working railroad model (which depicts New Buffalo in the early 1900s) takes up much of what would have been the baggage area. Visitors can get the model trains running with the push of a button.

The HO scale train layout shows visitors how the the village of New Buffalo may have appeared in the 1920s. Depicted are the train yard, roundhouse, turntable locomotive facility, Hobo Village, the Pelican Pond into which boiler wash was disposed, the Quonset Hut, which is now Oink’s Ice Cream, Whittaker Street (not to scale), and the surrounding neighborhood.

On display in front of the museum is the New Buffalo City Fire Department’s 1863 Button & Blake Hand Pumper, which was pulled by and relied on human power to pump water to the fire. The unit on display, built sometime between 1850 and 1863, helped fight the great Chicago Fire. The pumper and crew were loaded on to a flat car and the Pere Marquette took them to Chicago. The pumper was restored to its present condition as part of New Buffalo Founder Days in 1964.

Visitors to the Railroad Museum also can go on a scavenger hunt complete with a checklist that includes “a tiny hobo camp” and “a picture of ‘Chessie” the cat.” Those filling out the form get a Tootsie Roll Pop.

For more, go to newbuffalorailroadmuseum.org.