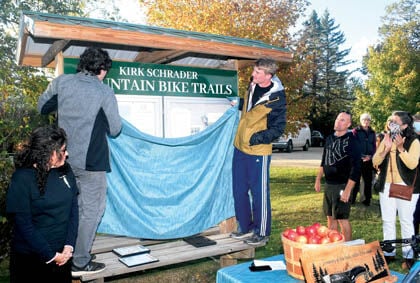 The Kirk Schrader Mountain Bike Trails sign is inveiled at the Chikaming Park and Preserve during a Sept. 30 Kirk's Ride ceremony. 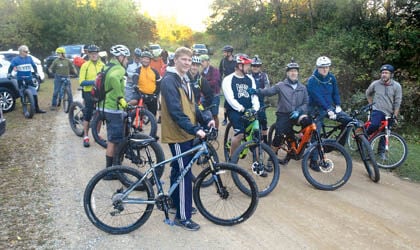 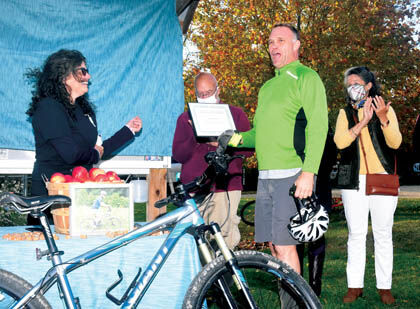 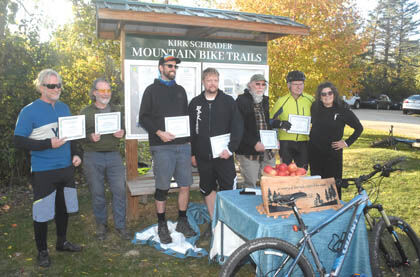 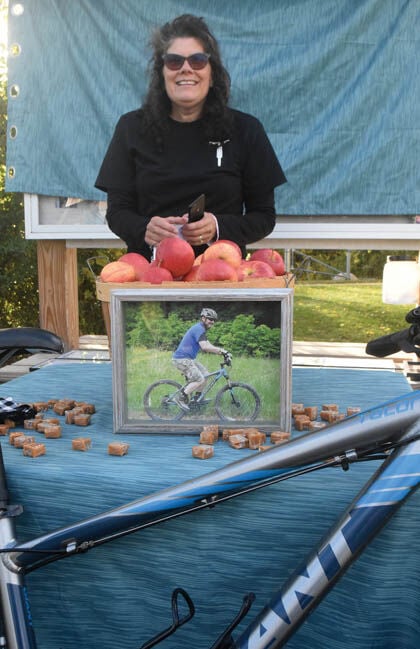 The Kirk Schrader Mountain Bike Trails sign is inveiled at the Chikaming Park and Preserve during a Sept. 30 Kirk's Ride ceremony.

LAKESIDE — The late Kirk Schrader was the driving force behind the establishment of mountain bike trails at the Chikaming Park and Preserve.

His legacy was honored Sept. 30 as the first annual Kirk's Ride was held at the park on what would have been his 56th birthday.

Janet Schrader talked about her husband's successful effort to establish a place for mountain bikers to ride before their sons Alex and Nick unveiled a new "KIRK SCHRADER MOUNTAIN BIKE TRAILS" sign (which was donated by ART/FX).

She said creating a trail on the Schraders' property was considered, but Kirk had worked for Chikaming Township for 36 years "and he loved this park."

"He had a dream. He said 'I want everyone to ride it, and liability is a little too high for us to have it on private property.'"

Janet said Kirk approached the township with the idea, and a public hearing took place.

"Quickly it just started happening. It was amazing how many people wanted this to happen," she said.

Janet said Kirk took one of his last Jeep rides last year to the Park and Preserve where mountain bikers were riding. As they drove away she said a rider yelled out "Hey Kirk, thanks for having a dream!"

"And that really stuck with him, so thank you. It was a call-out we would say to each other," she noted.

Schrader said the inaugural event was "a celebration of volunteers that made this trail possible."

"Kirk just happened to be the first volunteer, but there were many, many others," she noted.

Ten "Celebration of Volunteers" awards were handed out during the Kirk's Ride event to the following (the framed certificates read "In appreciation to your commitment in building the Kirk Schrader Mountain Bike Trails and putting in over 50 volunteer hours. Your contribution in our community is highly Valued"): Tony Dlouhy, Stefanie Brown, Rodney Summerscales, Tiffany Summerscales, Cory Schiller, Lanny Ross, Eric Nevalainen, Jack Kirkpatrick, Chad Sperry and Bruce Jones (the last five also serving as build leaders who are slated to be involved in adding another loop to the trail).

Schrader said Jones came to the initial public hearing on the trails and told Kirk it could be done.

She said Sperry "took over when Kirk got sick, and for that I'm eternally grateful."

Janet said she once snuck up on Kirk and Jack Kirkpatrick when they were flagging a yet-to-be finished trail.

"For those of you that don't know what that looks like, they had flags in the one pocket, a machete strapped to the other, and they had invisible handlebars doing this (she demonstrated them pretending to be riding mountain bikes). I thought grown men pretending like they had handlebars was the funniest thing I'd ever seen, It was beautiful."

A pair of Lifetime Service Awards were presented to J.V. Peacock and Pat Fisher "In appreciation to your commitment in motivating people to 'get outside and Move.'”

Janet said Peacock's group, the Bike Michiana Coalition, donated money for signs along the trail. He urged everyone to "get outside and get some fresh air!"

She said Fisher, president of the Harbor Country Hikers, "has done so much to unify all of the trails in Harbor Country so they have the same signage."

Also recognized were members of the Chikaming Township Park Board, the Township Board and local businesses that have supported the bike trail including Louisa's Cafe, The Whistle Stop, Art/FX (for the sign).

Park Board Chair Deborah Hall-Kayler said "What an honor, thank you for all you have done!"

Schrader said she will soon leave the Park Board, adding that a Steward Committee for the Mountain Bike Trail has been formed. She then introduced its members as: Arthur Anderson, Rich Schroeder, Tim Moore (her brother), D.J. Johnson, Bruce Jones, Chad Sperry, Jack Kirkpatrick, Eric Nevalainen, and Lanny Ross.

The Sept. 30 Kirk's Ride ceremony concluded with a group of mountain bikers (led to the trailhead by Alex) going for a ride, followed by hikers (and some canines) hitting the trail for a mile.

During the ceremony Janet Schrader said Kirk grew up nearby on East Road and had a "claim to fame" involving bicycles.

"He could do a wheelie … from East Road over the railroad tracks all the way down to Pier Street to the beach and back," she said.

Janet noted that many bike riders on the local scene named themselves after their cycles back in the day, and Kirk's ride was a Mongoose.

His last mountain bike was a Giant (it was front and center during the Sept. 30 ceremony), and Janet said "I'm becoming the Giant, I will learn how to ride."

Schrader said next year's Kirk's Ride will be a "timed race and fund-raiser" that will also feature more volunteer service awards for those who have out in more than 50 hours of service.

"It will be an annual event," she added.

Schrader passed away on Nov. 27, 2019. He was a fifth generation resident of Lakeside and served his community for over 36 years as the sexton and caretaker of the Chikaming Township cemeteries. Schrader was an avid bird watcher and transporter of endangered birds of prey. He enjoyed working on his 1985 Jeep CJ7 and being his wife’s “first mate” building sand castles in her Sand Pirate business.