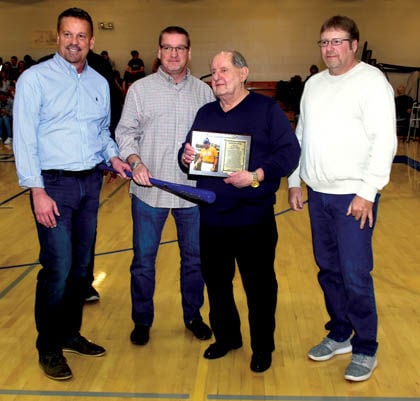 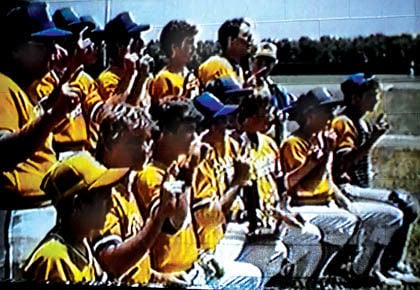 Members of the 1983 New Buffalo High School baseball team pose with the state championship trophy in a scene from the video shown March 5.

Members of the 1983 New Buffalo High School baseball team pose with the state championship trophy in a scene from the video shown March 5.

NEW BUFFALO — A coach and teacher who led the 1983 New Buffalo High School baseball team to a state championship was inducted into the school’s Athletics Hall of Fame on Thursday, March 5.

The induction ceremony for Roger Vink took place at half-time of a New Buffalo-River Valley varsity basketball game (see page B1 for a report on that contest).

During a meet-and-greet session at the school, Roger Vink was joined by three players from the 1983 Bison squad in reminiscing about the extra-inning state title game victory over Morrice played at Eastern Michigan University.

Tim Rogers (an outfielder on the team) said it was always fun to play for Vink.

“He kept it light and he believed in us. Gave us confidence to play as a team.”

Joe Debiak (a left-handed pitcher and first baseman): said watching the video of the championship game (scenes were shown during the induction ceremony) “really brings back the memories.”

He said the score was tied at 4-4 when Coach Vink called a suicide squeeze bunt play with no outs and Rogers at third base — a spur of the moment call that caught the Morrice defense off guard.

Shortstop John Hammond said teammate Greg Waaso laid down the bunt that ended up driving in the winning run.

Rogers said he led off the New Buffalo 10th with a single and ended up at third after Pete Liberty collected a hit followed by a fielding error.

Vink described Rogers’ slide into home plate as “a cloud of dust,” adding that the pitcher fell down and Rogers was safe by a wide margin thanks to “the element of surprise.”

“I thought ‘Now or never’ because we were running out of pitchers,” Vink said of the suicide squeeze call.

He noted that Morrice was the number-one team in the state.

Before the championship game, Vink said he decided it would be his last as coach.

“It worked out well,” he added.

Rogers, Debiak and Hammond  signed a special bat presented to Vink along with a framed jersey.

Vink said he’s been operating the Oink’s Dutch Treat Ice Cream shop in New Buffalo for 34 years, with the 2020 opening coming in April.

One of those present for the induction ceremony was longtime New Buffalo High School Principal Ron Hart — who said he was coaching Galien’s baseball team (along with football) in 1982-83.

“The year that they won the state championship, New Buffalo and Galien tied for the Red Arrow Conference championship,” Hart said.

Hart, who spent 30 years as a coach, educator and administrator in New Buffalo is himself a Hall of Fame Inductee along with coaches Randy Mast and Ron Morrison.

New Buffalo Athletic Director Matt Johnson read the following during the Vink’s Hall of Fame induction ceremony: “Many of you here tonight probably know Mr. Vink in one of two ways: the coach of the 1983 Baseball State Champions and/or the owner of Oink’s Dutch Treat .

There is much more to the man we are honoring this evening.

Roger Vink started his teaching career at New Buffalo in 1966 after graduating from Western Michigan University. He was hired to teach Physical Education and History. He started his athletic coaching career as a varsity football coach in 1966. His career would later see him coach basketball, cross country and finally on the diamond as baseball coach from 1975 to 1983.

Professionally Mr. Vink went back to school and earned his certificate in driver’s Education and began teaching that as well. Not only was he a coach and teacher, Mr. Vink also drove a bus route, usually making him the first one to school in the morning and the last one to leave in the evening.”