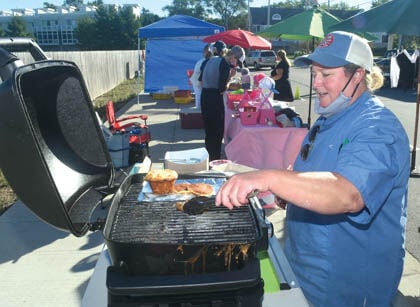 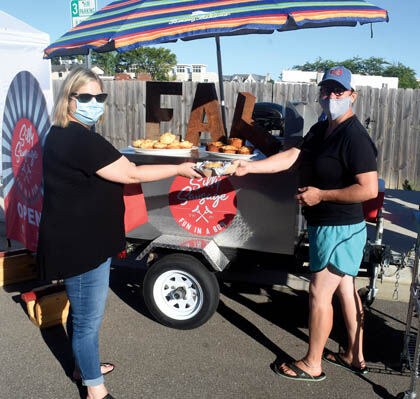 Deborah Hamilton (left) delivers an order to Traci Lauricella at the SIlly Sausage (Fun on a Bun) food cart during a recent visit to the New Buffalo Farmers Market. 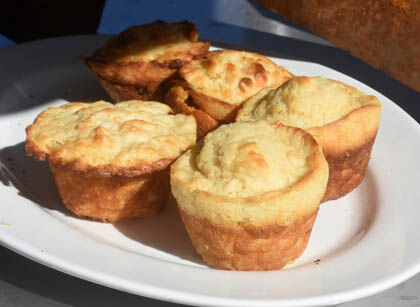 A batch of Silly Sausage (Fun on a Bun) buttermilk biscuits.

Deborah Hamilton (left) delivers an order to Traci Lauricella at the SIlly Sausage (Fun on a Bun) food cart during a recent visit to the New Buffalo Farmers Market.

A batch of Silly Sausage (Fun on a Bun) buttermilk biscuits.

NEW TROY — Chef Jen Powell and her partner, Deborah Hamilton, have been working hard to make sure the Silly Sausage (Fun in a Bun) food cart more than lives up to the promise of its name.

"Silly sausage is a term of endearment for children in the UK — and Deb's from the UK," Powell said.

She said the New Troy-based food cart got its start setting up in early June at Red Arrow Roasters in Harbert.

Lately it's been "have cart, will travel."

"We started getting a lot of calls to go to different places," Powell said, adding that they have been visiting area farmers markets including New Buffalo and Buchanan, Peat's Cider Social in Stevensville (where a Sunday afternoon brunch was recently started), Transient Artisan Ales in Bridgman, and Stevensville's Watermark Brewery.

"We're going as far as Fennville in October (Waypost Brewery)," she added.

"In the morning and for brunch I make buttermilk biscuits … some are made with sausage from Patellie's in Three Oaks and our homemade pimento cheese," said Powell, who added she's from the South (outside of Houston, Texas).

She said Silly Sausage features all kinds of fun sausages and recently did chorizo tacos, as well as "Tiny Dancer" pancakes with chicken sausage, homemade blueberry jam and whipped cream.

"One our claims to fame is sausage called Texas in My Rearview Mirror," Powell noted. "It's a jalapeno cheddar brat on a pretzel bun with homemade pimento cheese, bacon, fried onions and barbecue sauce."

She said they always have vegan, vegetarian and gluten-free options.

In addition to their signature sausages, biscuits and other dishes, Powell said Silly Sausage can cater all kinds of food.

During a recent New Buffalo Farmers Market $5 of every purchase went to the Humane Society of Southwest Michigan.