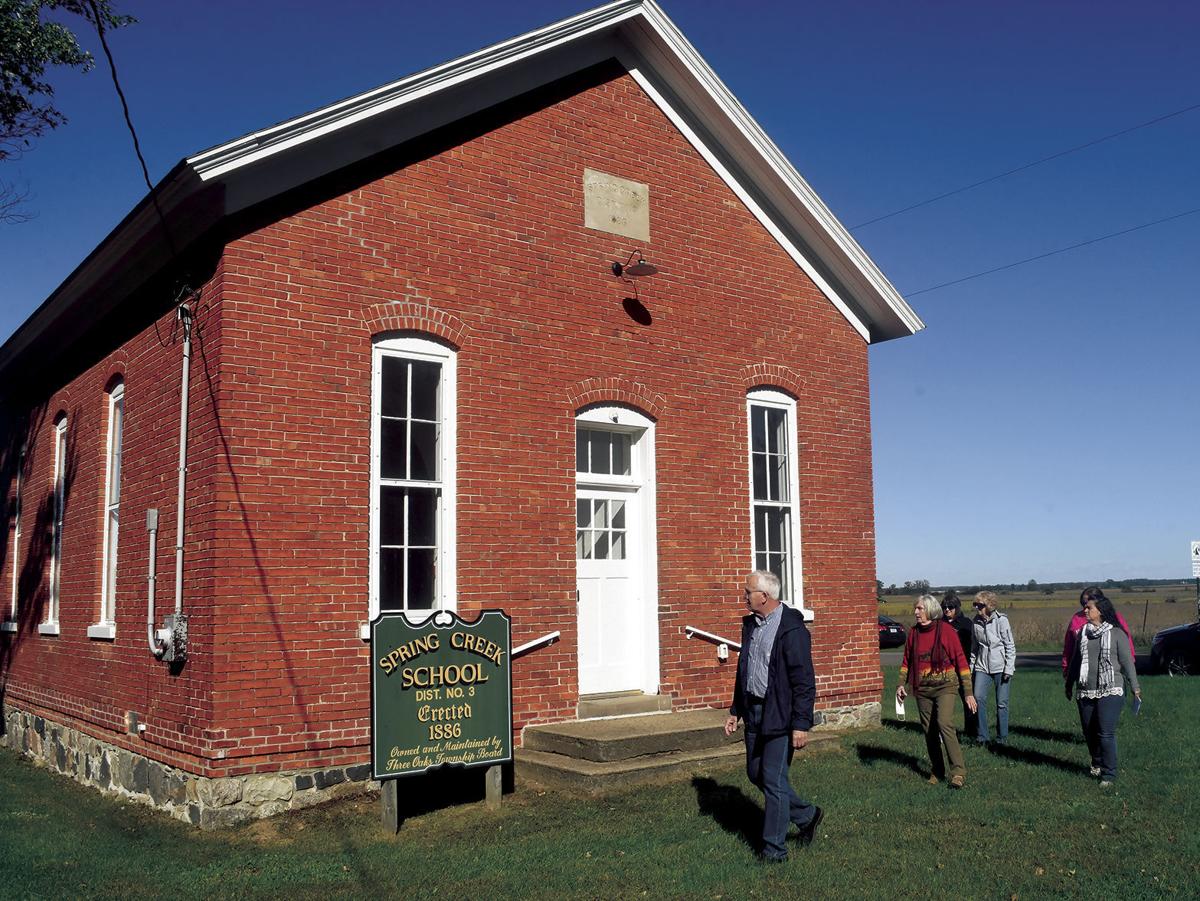 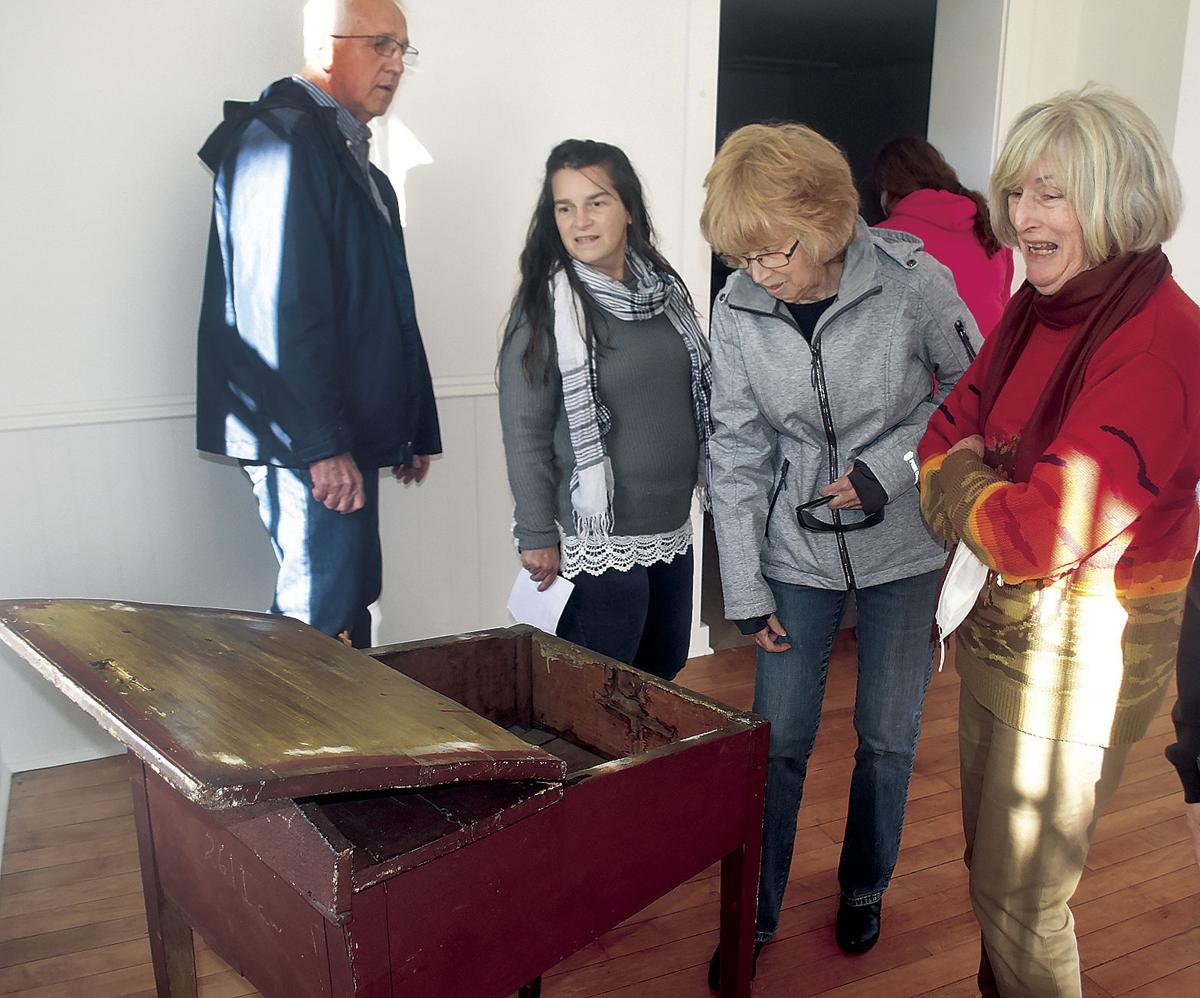 Checking out a vintage desk inside the partially restored Spring Creek School House near Three Oaks.

Checking out a vintage desk inside the partially restored Spring Creek School House near Three Oaks.

THREE OAKS — During a recent tour of the historic Spring Creek School House, located at the intersection of Three Oaks and Donner Roads in Three Oaks Township, members of the Rebecca Dewey Chapter of the Daughters of the American Revolution got an up-close look at an ongoing restoration effort.

Three Oaks Township Board Trustee Christian Mitchell said on Oct. 17 that recent work has reversed a decline that saw the foundation of the 1886 building beginning to come apart and bricks starting to drop out of the exterior walls.

“It was close to being condemned,” he said.

Phase 1 of the restoration project (completed in 2020, before the pandemic) included securing the building’s structure, restoring the interior by adding a new ceiling and walls, removing the remains of a 1,200-pound boiler that once provided heat, and adding an accessible rear entrance (all of which were explored during the Oct. 17 tour). The wood floor looks great after being sanded and sealed.

Mitchell noted that a collision with an errant vehicle in the 1980s and a resulting insurance settlement ended up providing some improvements such as a new roof.

Highlights of the Oct. 17 tour included the bright, open interior that once was a bustling classroom, and the contents of a massively improved back storage room (once used to stash coal and wood for the boiler) that houses a collection of old desks, maps and textbooks from the one-room schoolhouse, including a picture of the Pilgrims. There’s also the original outhouse standing behind the main building, built in the same style.

During an October 2019 fundraiser to support the Spring Creek School renovation and preservation project hosted by Lynn and Allen Turner at their nearby Spring Creek Farm property, John Guinness of the Berrien Community Foundation presented a $7,500 William J. Deputy matching grant.

The Spring Creek Schoolhouse Restoration Committee also was awarded a $10,000 matching grant from the Frederick S. Upton Foundation, a $20,000 grant from The Pokagon Fund, a $25,000 commitment from Three Oaks Township, and a $15,000 pledge from township Allen Turner.

Mitchell said generous donations also have come from people who went to the school.

In a recent interview with Region of Three Oaks Museum Board member Nick Bogert, Ed Miller, who attended the Spring Creek School for two years before the local district consolidated, said Katherine Zeiger was the teacher.

“She sat in front of the room, we sat in back.”

Miller said there was a a pump out front, and a bucket was filled every morning. Everybody drank water out of same dipper during the day. He said there were never more than a dozen in the first through eighth grades. Also, there was no horseplay in the school. You had to be quiet so other kids could do their work.

Mitchell said the next phase of improvements (and related fund-raising) is slated to include a parking area in back, a ramp to the back entrance, the addition of septic and a well so a bathroom can be built, along with an HVAC unit to make it a functional building.

Just how the restored Spring Creek School House will be used is yet to be determined by township officials, but Mitchell said he would personally like to see it furnished as close to it was when pupils were attending class there as possible.

“We have a lot of nonprofits that are interested in it once it’s completed.”