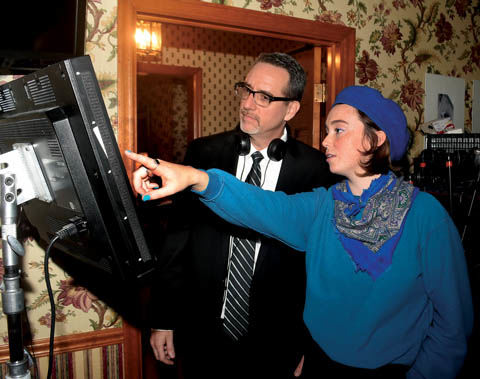 “The Funeral Photographer’ Director Ashley Thompson (right) and screenwriter/producer Mark Strauss work together on the set in Three Oaks. 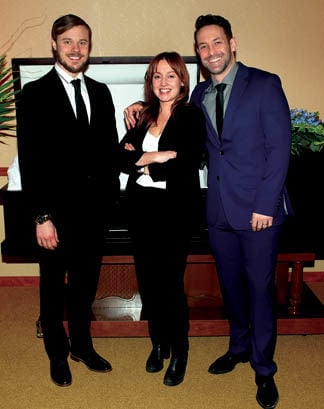 “The Funeral Photographer’ Director Ashley Thompson (right) and screenwriter/producer Mark Strauss work together on the set in Three Oaks.

THREE OAKS — A local funeral home proved the perfect place to film a short film about “a young woman (portrayed by Tara Hazel Walsh) hired for what she thinks is an ordinary photography job — until she discovers the real reason she was hired.”

“The Funeral Photographer,” directed by Ashley Thompson of Chicago and written by local screenwriter/producer Mark Strauss, was shot over three days (Dec. 6, 7 and 8) at the Pobocik Chapel Wagner Family Funerals in Three Oaks.

A more in-depth description of the story follows: “Julie Morgenstern steps into a funeral home for what appears to be just another photography job and quickly learns she won’t get paid unless she takes photographs of every single person in attendance – and she must be done before the service starts. But why? And who are the suspicious looking late-comers to the funeral?”

Executive Producer Brad Gorman said the short mystery film (about 15 minutes in length) features “an amazing cast and crew” along with its talented 28-year-old director.

“Somebody who read the script (by Mark Strauss) said ‘I wish Rod Serling was alive to read this,’” he added.

Thompson said “The Funeral Photographer” is her second short film. The first is entitled “I Miss Jamie When She’s Gone” (about two sisters returning to their childhood home which had become a hoarding situation) was shot in July 2018.

“I came into filmmaking pretty organically” … participating and editing short films made by friends … “I’ve kind of learned it all be just being on set and YouTube Tutorials,” Thompson said.

She said “The Funeral Photographer” will probably have a premiere  screening as well as being taken it around on the Festival Circuit before being released public.

Strauss said a private screening for cast, crew and crowd-funding campaign donors will likely occur at The Vickers Theatre in Three Oaks.

A percentage of donations from the production’s successful crowd-funding campaign will go to Final Farewell – a charity which provides money and services for families who can’t afford funeral or burial services for loved ones.

Strauss said about 50 extras and 22 crew members were involved in the three days of shooting in Three Oaks.

Mark Strauss said he started writing “The Funeral Photographer” last fall, and has been collaborating with Thompson as production approached.

An earlier screenplay he wrote finished third out of 800 in an international competition.