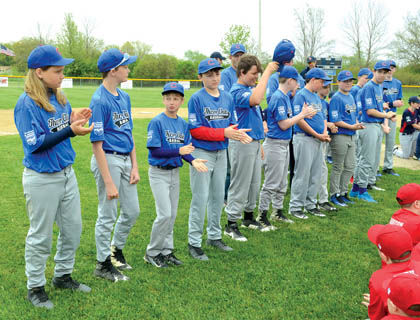 The Three Oaks Baseball Association 12U Cubs are introduced during the recent season-opening ceremony. 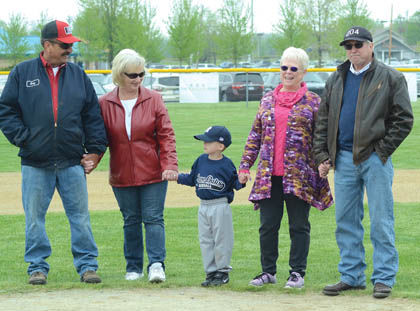 Gary and Gail Martin, Garrison Gibson, Sally and George Frye (from left) are recognized during the May 12 opening ceremony. 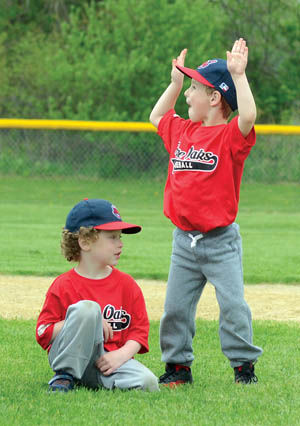 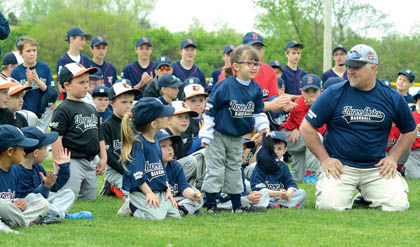 Ashlynn Beregsasy takes a bow as the Yankees T-ball team is introduced during the May 12 opening ceremony for the Three Oaks Baseball Association held at the Jim Vickers Memorial Complex at Watkins Park in Three Oaks. 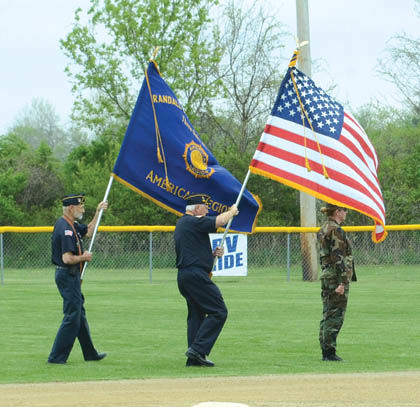 Carrying the colors during the recent season-opening ceremony. 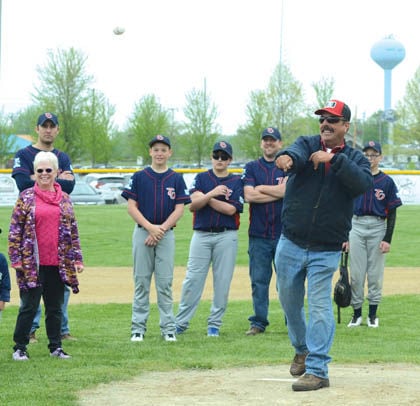 Gary Martin throws one of the “first pitches” during the May 12 ceremony. 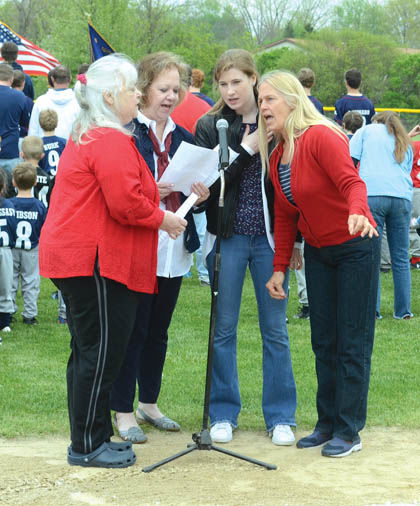 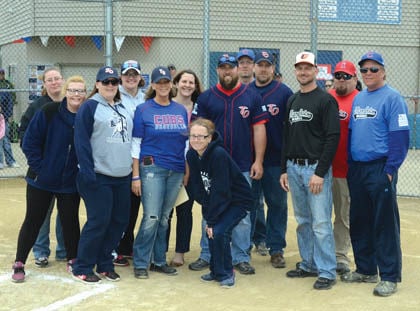 The Three Oaks Baseball Association 12U Cubs are introduced during the recent season-opening ceremony.

Gary and Gail Martin, Garrison Gibson, Sally and George Frye (from left) are recognized during the May 12 opening ceremony.

Ashlynn Beregsasy takes a bow as the Yankees T-ball team is introduced during the May 12 opening ceremony for the Three Oaks Baseball Association held at the Jim Vickers Memorial Complex at Watkins Park in Three Oaks.

Carrying the colors during the recent season-opening ceremony.

Gary Martin throws one of the “first pitches” during the May 12 ceremony.

THREE OAKS — The Three Oaks Baseball Association celebrated the start of its season on May 12 by meeting this year’s teams and revisiting its past.

Honored during the ceremony at the Jim Vickers Memorial Baseball Complex at Watkins Park were Gary and Gail Martin and George and Sally Frye.

Public address announcer Garry Lange noted that Three Oaks’ first Little League games were played on the field that now is the exclusive home to the local adult softball league.

“The first Little Leaguers to play on that field are turning 70. In the 1980s, a field was build between that field’s outfield fence and the railroad tracks. It served as the Little League field for over a decade. In the mid 1990s, the Watkins family, who had Three Oaks first supermarket, made this land on which you are standing or sitting, available to the community. What happened next was a true story of a community coming together.”

Lange said a group of Little League parents got together and approached the village of Three Oaks with the idea putting in a Little League complex. The village said yes, and then the work began.

“Over the course of the next 12 months, generous donors, area contractors, and more than 200 people contributed thousands of man hours of their time to put together what is one of the finest complexes in the area, giving each and every Little Leaguer a special place to play,” Lange said. “Our honored guests played important roles in guiding the project to completion.”

He said Gary Martin learned the game and enjoyed it by playing with friend Curt Smith and other family and friends in a beautiful meadow on Martin Road.

“Gary became involved in Little League when his son Tommy began to play. Like many dads, he coached his son’s team, and also served as a league officer. Gail was also very involved, doing all the usual Mom things for the league. She also handled all of the books and accounting for the construction of these fields,” Lange said.

He said George Frye learned the game as a Little Leaguer in New Buffalo, fell in love with teaching the game, and had a coaching career that spanned 40 years and included several championships at Eaton Park.

“In a special season, one of George’s Little Leaguers was Brian Terry. Brian’s mom Sally and Coach George struck up a friendship that season, which resulted in their marriage. George’s love for baseball also resulted in him finding the love of his life. Sally has been the ultimate baseball mom.”

“During those 12 months, if you wanted to know where Gary, Gail, George or Sally were — after work or on the weekend — it was right here. They all saw the joy the game brought to kids, and they wanted them to have a special place to play. Both couples, of course, had children in the league. They now have grandchildren in the league,” he said.

Todd Noble then led a prayer.

Players were credited with selling $3,496 with of popcorn in a league fund-raiser and raising $1,643 in pledges during a Hit-A-Thon.

“These are the volunteers that run this program,” said Lange.” For a lot of them, this is their first year. Major changes have been done and they are proud of them. The age divisions that opened our teams to play more teams, the South Field was upgraded and the infield is bigger, that now allows for 12U teams to come in and play here. A special thank you goes to Tom Krieger. Tom was instrumental in getting the 12U field updated and spent many hours of his personal time getting it repaired. Thanks Tom! Thank you to all the board members for everything you have done and continue to do.”