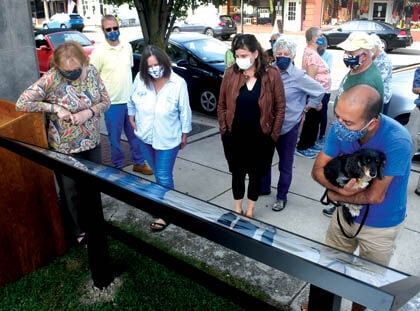 People attending the Sept. 23 unveiling of the historical plaque in downtown Three Oaks take a close-up look at the information it contains. - photo by David Johnson 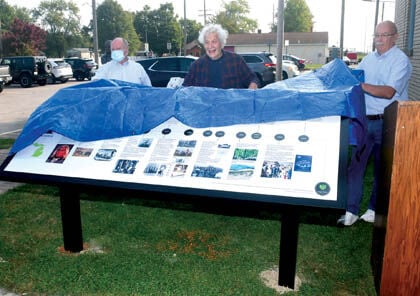 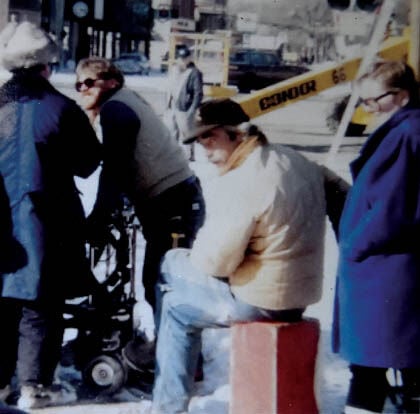 People attending the Sept. 23 unveiling of the historical plaque in downtown Three Oaks take a close-up look at the information it contains. - photo by David Johnson

THREE OAKS — The history of Three Oaks is now on display in the middle of town near a bust of local legend E.K. Warren.

A historical plaque located along South Elm Street across from Big C Lumber was dedicated during a Sept. 23 unveiling ceremony.

"The stories in this community are extraordinary. If we told all the stories, this plaque probably would have had to extend all the way to South Bend," stated Allen Turner, who with his wife Lynn financed the new addition to downtown Three Oaks.

Village President David Grosse said the plaque, inspired by a similar display in a neighboring community, was about a year in the making.

"I'm sure there are people who have lived here their whole lives and don't know some of the things that are on this plaque. It's terrific," he said.

Grosse gave Nick Bogert of the Region of Three Oaks Museum credit for gathering much of the historical information and illustrations.

Bogert said much of the information on the plaque came from exhibits at the museum.

"We're delighted to have cooperated in bringing some of the history out of the indoors … and onto a street where people passing by can learn a little more about history," he added prior to the unveiling.

Bogert said when the producers of 'Prancer' were trying to figure out where to shoot their movie, they picked Three Oaks because it hadn't been papered over — "it still looked like the place that it was."

"We still see it with the E.K. Warren office building anchoring downtown as the library, and a department store that was built in 1910 is now reborn as a place to eat," he said.

"It has a fresh coat of paint on its interior walls, we've ordered some canvases of photographs of old Three Oaks and the people who built it … We're hoping that for many years to come it will be the site of community events."

Suzanna Bierwirth, chairperson of the Three Oaks DDA who along with Brad Simpson did design work on the plaque, said there are so many stories in the village and it was amazing to read all of it.

"It was my job to make it digestable and present it in a way that people can stand around here and really get a glimpse of our wonderful story," she noted.

Grosse said the project would not have been possible without the generosity of Lynn and Allen Turner.

"These folks have supported Three Oaks in ways that most people are never going to know," he said.

"We live on what may be the first settled piece of land — 1833 the Shedd family moved in there and they're still buried in the cemetery," Allen Tuner said during the Sept. 23 dedication ceremony. "We're very fond of this town and its history, and we are basically storytellers."

The plaque is set up as a timeline from the early days to the present. The first entry reads:

"Long before Three Oaks existed this land was home to native peoples. Michiana was rich in game, fowl, fish and wild rice. The soil was good for growing

vegetable crops like corn, beans and squash. Ojibwe, Odawa and Miami indians have all lived in Southwest Michigan, but by the early 1800s Michiana was primarily occupied by people who referred to themselves as Neshnabek (True People) and were known in the Algonquin language as Bodéwadmi (or Keepers of the Flame).European settlers spelled their name Potowatomi."

Among the other entries are passages featuring village founder Henry Chamberlain; renowned businessman and conservationist E.K. Warren; and the filming of "Prancer" (complete with a photo of actor Sam Elliott between takes).