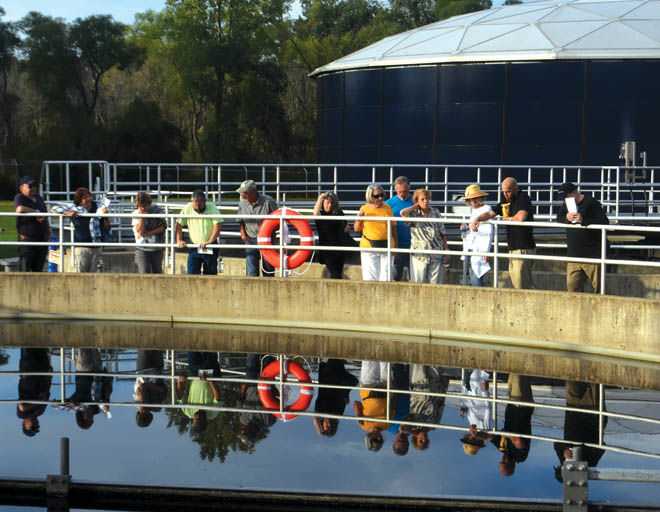 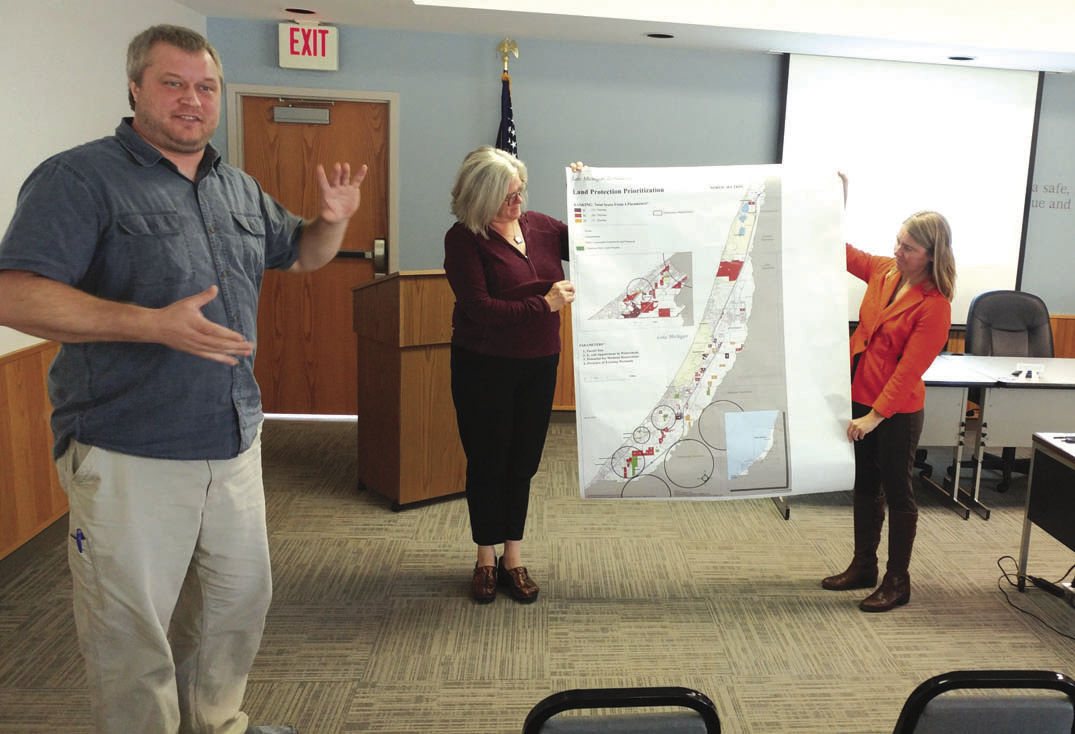 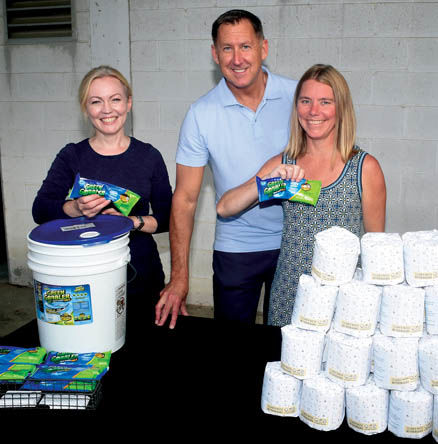 Some of the water-friendly products offered to those participating in the GRSD tour. 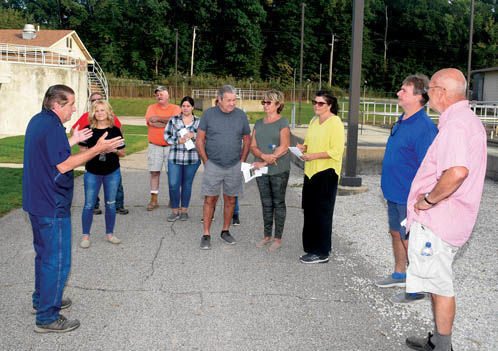 Some of the water-friendly products offered to those participating in the GRSD tour.

“After a lengthy grant application, SWMPC (the Southwest Michigan Planning Commission), with its partners, was able to secure funding to raise awareness of the aging and failing sewer system and septic systems in this area,” said Senior Planner Marcy Hamilton. “We authored a watershed management plan that details solutions to reduce pollution. Ultimately, we want to eliminate beach closings due to E. coli bacteria levels being too high.”

The Lake Michigan Tributary Watershed partners include the Berrien County Health Department, The Pokagon Fund, Great Lakes Scientific, and Chikaming Open Lands. Each plays a significant role in the protection of the land and water through education, pollution prevention, testing, water protection, and funding. Visitors to the new website will receive detailed information about the current local and regional situation, actions that can be taken by businesses and homeowners, plus resources and news on active solutions updated regularly with articles, upcoming events, breaking news, opportunities for public engagement, and original content to support SWMPC’s mission to promote a sustainable, high quality of life through the facilitation of sound planning and decision-making.

“With the … beach closings at Warren Dunes, Weko Beach, and Cherry Beach due to E. coli (during the spring and summer of 2019), the release of this website is very timely.  We really hope the website will serve as a resource that will help to improve our Lake Michigan beaches and our economy,” Hamilton added.

“Which means we take the dirty water and make it clean and put it back in the lakes and streams and creeks and rivers” at 97 to 99 percent clean water discharged into Galien River which goes out into Lake Michigan,” he said.

Histed said a priority at the facility is to get rid of ammonia and phosphorous.

Most of the cleaning and filtering is done in gigantic aeration tanks (there are six totaling 2.25 million gallons) by a variety of naturally occurring bacteria which literally eat waste out of the water (thus making it a live filter plant).

During the tour is was explained that making sure chemicals that would harm those microbes, sometimes called “bugs,” is not released into the system is a high priority.

A brochure on the facility includes the following information on its Industrial Pretreatment Program (IPP).

“The IPP staff goes into the local industries in the service area to try and prevent the introduction of pollutants (both accidental and procedural) into the system. This is huge for preventative measures.”

Most of the solid waste processed by the GRSD (1.8 million gallons a year) is skimmed off in immense clarifying tanks and ends up as fertilizer on area fields.

The facility does not treat storm drain runoff (“I’m only connected to your toilets, bath tubs, sinks, washing machines, dishwashers,” Histed said). It serves residential and commercial customers from Lake Township to New Buffalo including the city of Bridgman and the townships of Chikaming and Weesaw — (Three Oaks has its own system centered around lagoons).

The system that gets all of that wastewater to the plant in New Buffalo Township involves a series of more than 70 lift stations that combine pumps and the gravity effect to keep things moving toward the plant. A fleet of generators is stationed there in case the power goes out. The plant has an immense 750 kilowatt diesel-powered generator as well.

Histed said a major construction project on Red Arrow Highway from Union Pier north will include re-doing the force main and re-routing the main line to avoid a residential area.

Histed said the GRSD doesn’t have to raise rates this year, but does need to expand its system to handle heavy rain events and cut down on SSOs (sanitation sewage overflows).

A brochure on the GRSD facility includes the following information on “What Kind of Treatment is Used at GRSD?”

The name of the game is to remove the solids and treat the clear stuff (water). The GRSD Sewer Authority uses a couple of different methods for treatment.

The wastewater enters the plant via two intercepts (North and South). It then gets split between two primary clarifiers (which allow the solids in the wastewater to settle to the bottom of the tank as sludge, which is removed and sent to the digester. The GRSD has two sludge digesters where the primary sludge is pumped to be further broken down with heat in an environment that is without oxygen. Once the sludge is fully digested (neutralized) it will be trucked to farmland where it will be used for fertilizer.

Once the water makes it through a primary clarifier, it will go to the aeration tank in the form of “food” for the “bugs” in the aeration tank. This is called an Activated Sludge Process. The “food” is converted to new cells by the “bugs.” There are six aeration tanks that hold around 2.25 million gallons. This is where the bugs (bacteria, microbes, etc.) convert pollution into new bugs. Think of this portion of the process as a “living filter.”

The water and bug slurry (known as mixed liquors) goes into the secondary clarifiers. There are three secondary clarifiers. Their job is to allow the mixed liquors to settle to the bottom of the tank. We call this Return Activated Sludge (RAS). RAS is collected and pumped back to the front of the aeration tanks allowing the “bugs” to eat the available food, thus converting pollution into new cells again.

The clear water goes onto the next part of the treatment process which is the filters, which are filled with a mixed bed of charcoal and sand that filter out and capture solids. The water that leaves the secondaries gets pumped up into the box that forces the water from the bottom, up through the mixed bed, and ultimately overflows the top of the filter and onto the chlorine contact tank.

After the filters, next is the chlorine contact tank step. The GRSD has two sets of contact tanks where Sodium Hypochlorite (bleach) is added to the water for disinfection. This allows the wastewater to be rid of any harmful organisms. Before this water can be discharged into the river, it must be dechlorinated to protect the environment and wildlife. We use Sodium Bisulfate for dechlorination.

Under the heading “Help us at your house” it is noted that “The only thing that belongs down your drain is water.”

“Please do not flush or rinse anything down the drain that is not supposed to be there. Throw it away. This includes hygiene products, wet-wipes, straws, fats, oils, grease, etc.”

Hamilton said grant funding from the state Environment, Great Lakes and Energy Department (formerly the DEQ) is supporting an effort to keep e. Coli bacteria out of area streams that flow into Lake Michigan by reducing human sources of contamination.

“We’re working on a campaign to inform people how important our infrastructure is,” she said, adding that Michigan is the only U.S. state that lacks a sanitary code so septic systems are unmonitored after being installed. And she noted that one on three homes in the state are on septic (over 1.3 million).

She later said “It’s amazing how much they clean the water there,” regarding the GRSD facility.

Amy Cross of RLB Strategy talked about the Cleaner Water Better Beaches campaign developed with the Southwest Michigan Planning Commission that explains why e Coli is ending up in lakes and waterways and what people can do about it via the www.betterbeachesswmi.org website.

Those participating in the GRSD tour who filled out a questionnaire received samples of bamboo toilet paper and Green Gobbler, an enzyme based treatment to clean drains that is safe for septic systems.

One of those taking the tour was New BUffalo Township Supervisor Michelle Heit. She also serves as treasurer of the GRSD Sewer Authority Board, and said the group meets at 10 a.m. on the fourth Wednesday of each month at the Chikaming Township Center.

A video from the website shown during the Oct. 5 Water Quality Workshop in Bridgman illustrated how wastewater containing bacteria and pathogens like E. coli is making its way into Lake Michigan, with closed beaches a result.

It explained that Southwest Michigan is a watershed that drains directly into the lake through small streams and creeks that lead to rivers and lakes.

“Homes and businesses are either on municipal sewer systems or septic systems,” failing septic systems are a source of contamination, and Michigan is the only state without a sanitary code.

It also was noted that specially trained dogs can sniff out the source of E. coli.

A “here’s what you can do” portion of the video included the following advice:

2. Be careful what you put down drains.

Hamilton said water brought to City Hall would be tested for nitrates and nitrites for well water — high levels could indicate that waste is getting into the supply.

He said the more natural ground cover there is the better the infiltration of groundwater there is and also reduces pollution and surface run-off.

“Having areas of natural vegetation helps recharge groundwater,” he said.

Postema said buffer strips of grasses or forest separating farm fields from streams and creeks also improves water quality downstream by reducing runoff and filtering out fertilizers and other contaminants. He noted that a lot of native plants in prairies have deep root systems that can help clean water and slow runoff.

Nick Margaritis of the Berrien County Health Department said septic systems consist of the drain lines in a house, a large, concrete septic tank which traps solids and has them broken down by anaerobic bacteria, and a drain field where grey water filters into the ground where it is filtered and cleaned further by aerobic bacteria.

He said those on municipal sewer systems get their waste water treated by a plant such as the GRSD facility in New Buffalo.

The SWMPC specializes in providing data, information, maps, and technical assistance for planning and grant writing in Berrien, Cass, and Van Buren counties. The major program areas include transportation, economic development, community planning, and natural resource protection.  For more information, log on to www.swmpc.org or contact Marcy Hamilton at hamiltonm@swmpc.org or (269) 925-1137, Ext. 1525.