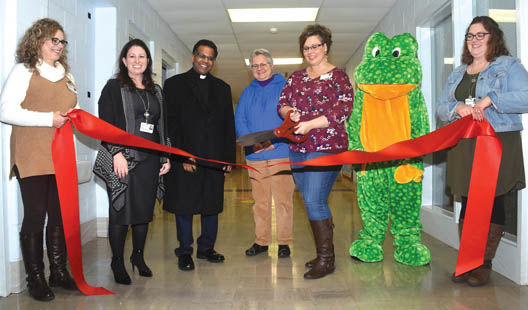 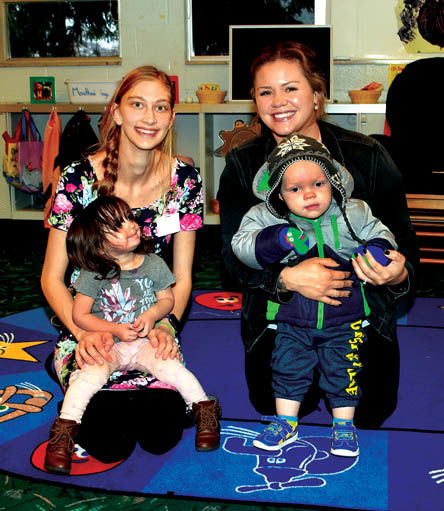 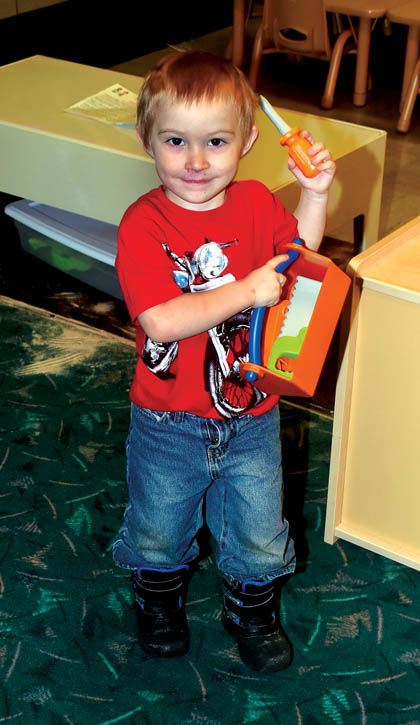 Brayson Wolford gets to "work" in a New Buffalo Head Start classroom. 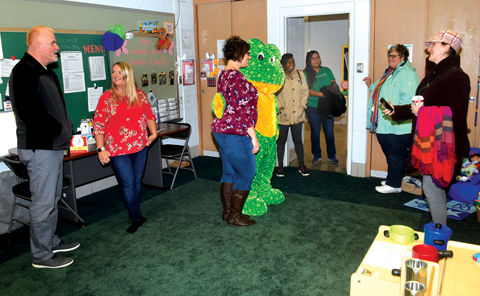 Brayson Wolford gets to "work" in a New Buffalo Head Start classroom.

“Opening the center here has been over a year in the making,” said Chanda Hillman, CEO and Executive Director of Tri-County Head Start. “We are so excited to be in this community and feel so welcomed here.”

She thanked Zech Hoyt, Executive Director of Youth Programs for the YMCA of Southwest Michigan, “for helping start the conversation;” Father John Peter Ambrose and Jan Conrad of St. Mary of the Lake Church for being advocates “to get us open;” New Buffalo Center Director and Family Advocate Noelle Krawiec “for taking that leap of faith” to lead a center that wasn’t open yet; Allison Lowry for getting the licensing done; and Pattie Masters for making the rooms look beautiful.”

“We have amazing families, amazing staff … we’re very excited to grow in this community,” Hillman said during the ribbon-cutting ceremony.

Classes began on Nov. 18 with full group of students (12 from infants up to age 3) and six staff members — two teachers in each room and support staff. The year-round program begins at 8 a.m. and runs until 4:30 p.m.

“The kids have been here about two and a half weeks and they’re loving it,” Hillman said. “We already have a waiting list so we know that people have needed this in the area.”

Hillman said a community needs assessment showed “that we needed something down in this area.”

She said seeing “this beautiful building that was open and ready for kids, it just made sense for us to go in here.”

“We home visited families for about two and a half months before the center opened — we were waiting for inspections to go through — so it was a really great time for the staff and families to build relationships with each other,” said Krawiec. “We’re going into week three and they’re happy. they say ‘We don’t want to go home’ when parents pick up.’ We tell them don’t take it personally, they just have a lot of fun here.”

Shelby Basham, who is in charge of the Sawyer Head Start, said there are 20 children in the classroom with a lengthy waiting list.

She said toddlers in New Buffalo will “transition out of this center, and go into my classroom.”

All slots are currently full in New Buffalo as well, but Hillman said people can apply throughout the year in case there are openings (For more, visit www.tricountyhs.org).

“Our eventual plans are to open a 3-year-old classroom here (in New Buffalo) as well (for about 15 children),” she said, adding that there already is free preschool available for 4-year-olds in the area.

Hillman said there are 20 Tri-County Head Start locations throughout the three counties (Berrien, Cass, and Van Buren) serving 908 children from birth to age five (and pregnant women) in 44 classrooms and in home-based programs. There are 250 staff members. Tri-County Head Start also offers a variety of services including health, vision and hearing screenings, family advocates that help connect families with community resources.

She said Head Start is funded through federal grants that run in 5-year cycles (since 1972) and has served about 40,000 children since then.

“It’s a great benefit for the children to acclimate themselves … helping in socializing and learning proper manners,” she said, adding “He really likes it!”

“I love the program, it’s awesome,” she said, noting that the people are the best part of all.

Hoyt said the YMCA has a goal to offer infant and toddler child care as part of a local YMCA in other parts of the facility (which includes a gym) at 704 West Merchant St.

Katie Maroney (President of the New Buffalo Business Association and owner of Equilibrium Fitness) said a series of community needs assessment meetings sponsored by The Pokagon Fund identified the need for a community center.

“We created an advisory committee, and from that committee we had invited different entities including Tri County Head Start, the United Way, and the YMCA of Southwest Michigan. Those talks ultimately were a catalyst for this - the credit goes to Chanda and her team from Head Start and Zech Hoyt from the YMCA — they’ve been the movers and shakers on this project.

“It was just bringing people together.”

The YMCA of Southwest Michigan recently announced plans to open a YMCA community center in the St. Mary of the Lake parochial school building behind the church, and also hopes to manage the development of a day care center with a targeted opening date of March 2020.

Future plans for the new facility also include health and wellness initiatives, fitness classes, a workout facility, and a gymnasium for sports programs.

YMCA of Southwest Michigan CEO Mark D. Weber said Maroney, Father John and St. Mary’s church members have helped spark the push to turn the facility into a community center, adding that they also have been working with The Pokagon Fund and Tri-County Head Start.

He noted that the YMCA of Southwest Michigan will become part of the YMCA of Greater Michiana on Jan. 1 through a merger of South Bend and Camp Eberhart in Three Rivers, Mich. The new entity will have facilities in St. Joseph, Niles, South Bend, at the camp and eventually in New Buffalo.