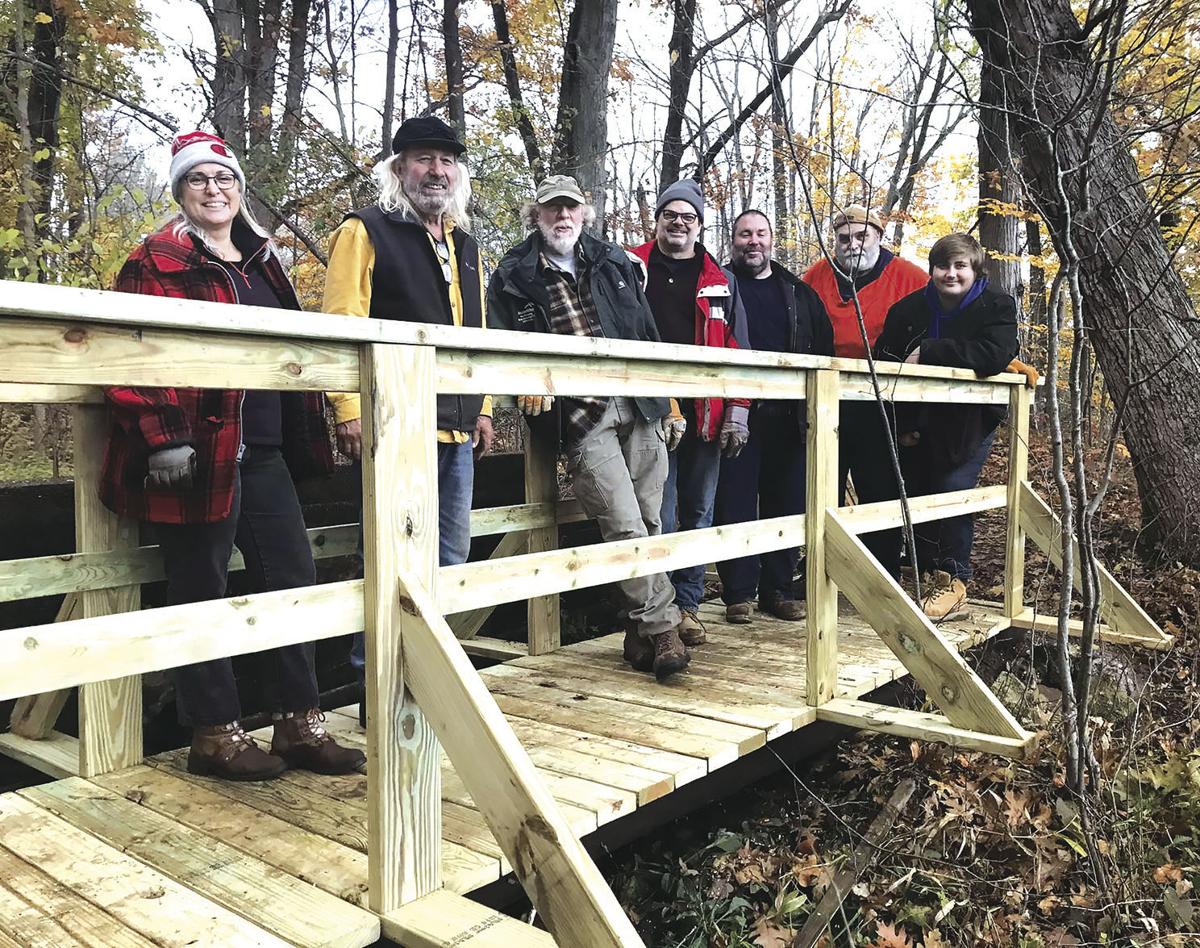 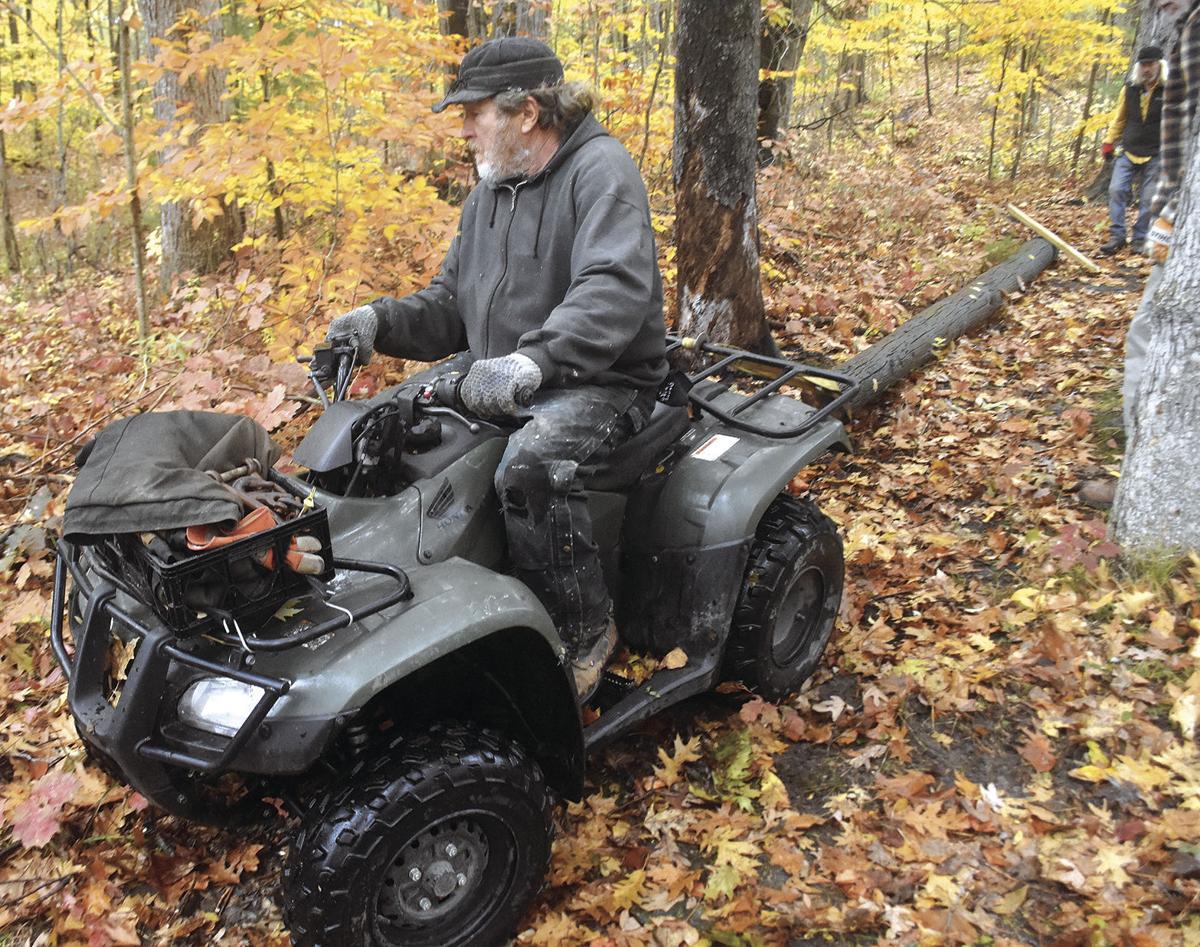 Charles Perkins pulls a key building block for the foot bridge down the trail on Nov. 13. 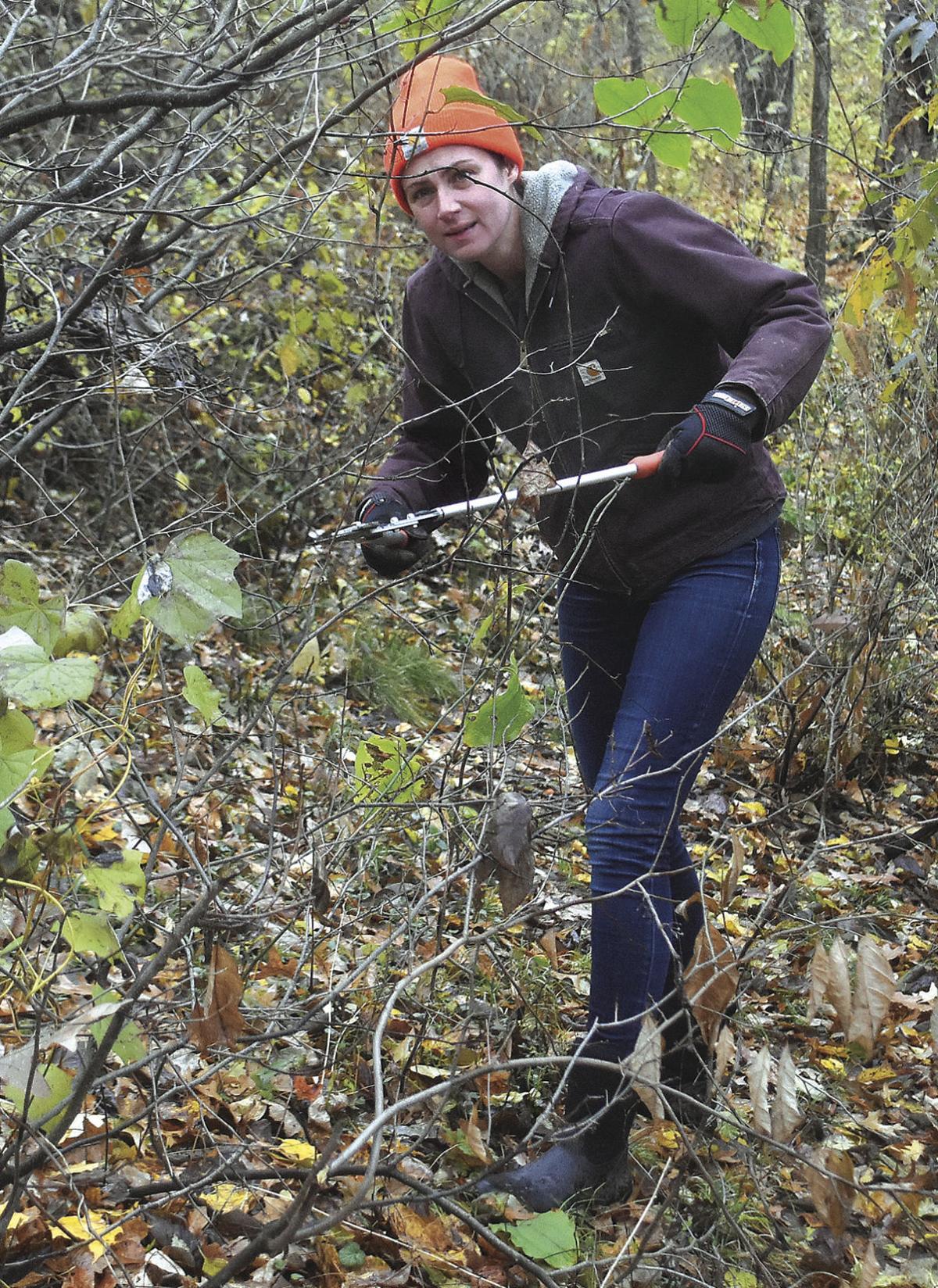 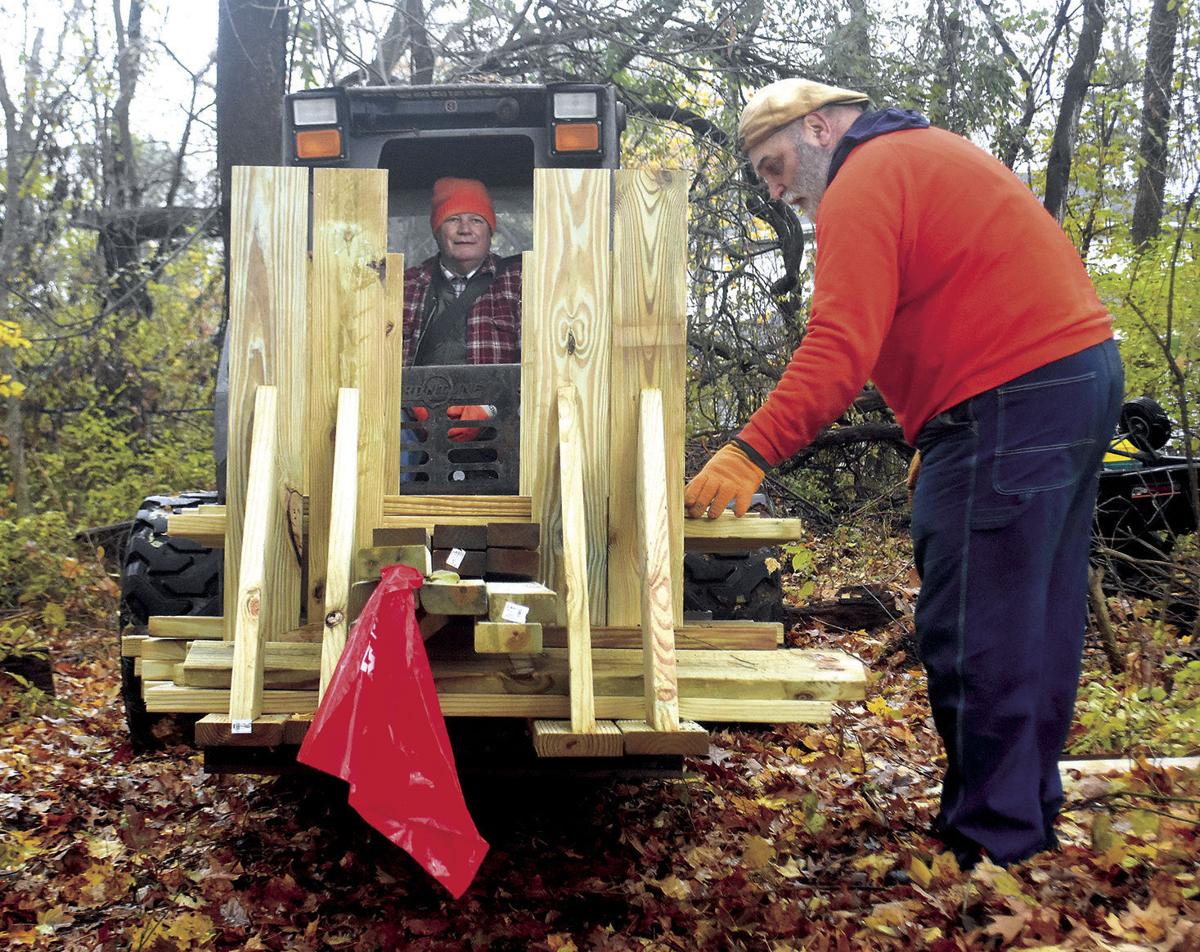 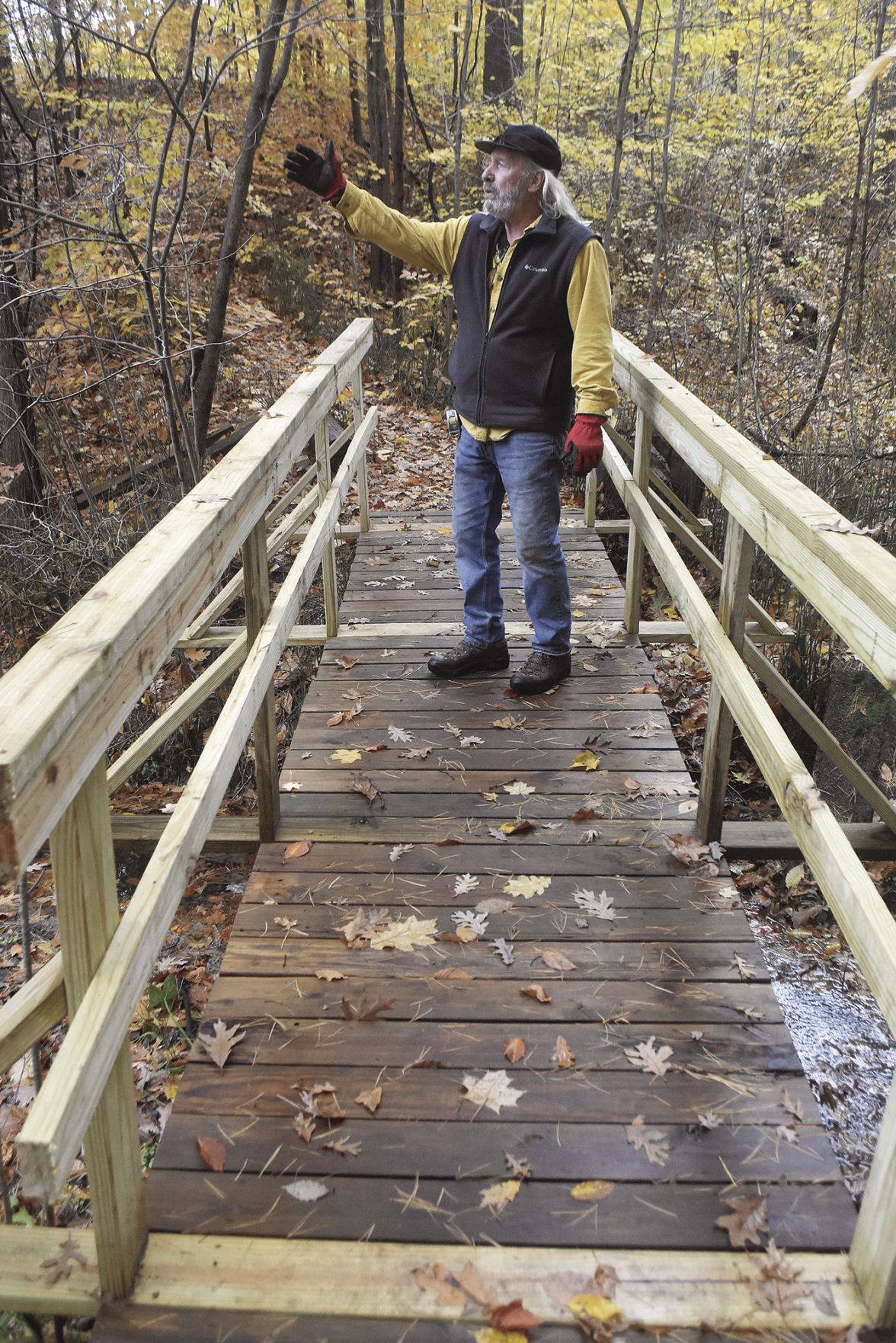 Terry Hanover enjoys the view from a foot bridge built by the Weesaw Trailblazers in October. 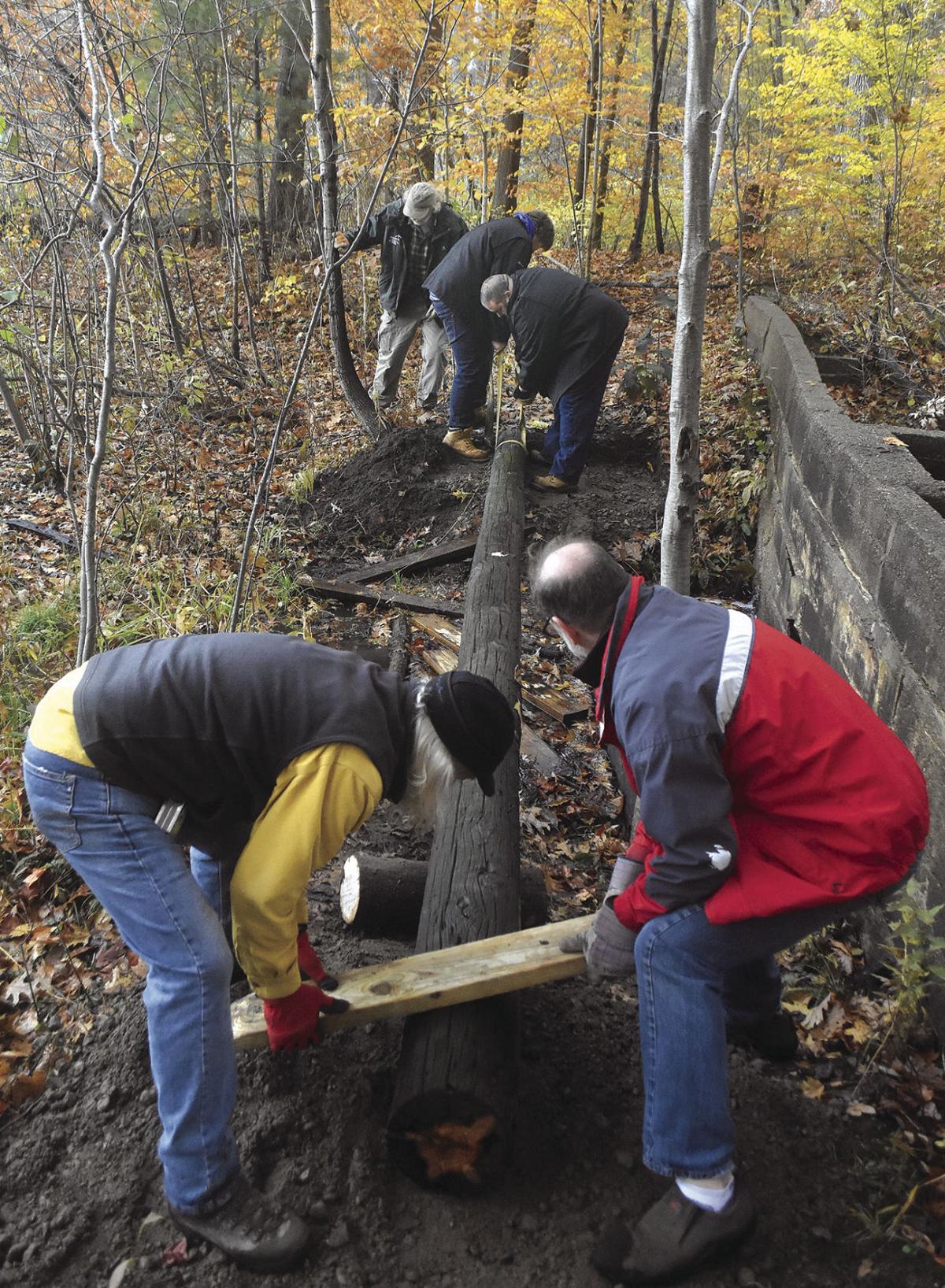 Placing a pole that serves as a foundation for a foot bridge along the New Troy trail system.

Charles Perkins pulls a key building block for the foot bridge down the trail on Nov. 13.

Terry Hanover enjoys the view from a foot bridge built by the Weesaw Trailblazers in October.

Placing a pole that serves as a foundation for a foot bridge along the New Troy trail system.

NEW TROY — A group of volunteers known as the Weesaw Trailblazers is building bridges and clearing paths in a scenic woodland and wetland area behind the New Troy Community Center.

November 13 was a busy day for the group as a foot bridge over a small creek was installed and sections of the trail were cleared.

Trailblazers member Linda Kanoski said the grassroots group was galvanized by their opposition to a proposal to log some of the larger trees from the township-owned land where a trail has long connected the Community Center (formerly an elementary school) to the cemetery area.

“Last summer this group formed,” she said.”We got petitions together to prevent the logging.”

As the project to rejuvenate the trail system has gained momentum, Kanoski said, it has become an exercise in “celebrating the trees and the woods instead of tearing them down.”

Weesaw Township acquired 28 acres of land between the Community Center and the New Troy cemetery (reportedly for $1,200 in back taxes) a few years ago, and a proposal to log that land to help fund an expansion at the cemetery was the main subject of an August 2020 outdoor hearing at which members of the public expressed concerns about many large trees (about 160) along the trail through that had been marked with paint.

Township Supervisor Gary Sommers, who helped clear a section of the trail off Weechik Road with a New Holland skid steer machine before hauling pre-built portions of the bridge closer to the worksite on Nov. 13, said the Township Board “made the statement that we’re not going to cut the trees that are OK to cut for market because the trees will accent the park.”

Terry Hanover of the Friends of New Troy (and the Weesaw Trailblazers) said every time he sees one of the red dots painted on bark along the trail, he thinks to himself “we saved that tree.”

The trail passes by the ruins of a former fruit orchard processing building and some concrete dams at the bridge sites that were involved in irrigation for that operation.

“It’s a dream come true. It’s amazing that we’re going to be able to do this when just a few short years ago there seemed to be a lot of brick walls to getting there,” Hanover said of the trail project.

He remembers walking the trail in the 1970s when he had his first woodworking shop in the “Center of the World” (otherwise known as New Troy).

Kanoski said Weesaw Trailblazers volunteers also built a foot bridge along the trail about a month ago.

She said the goal of the Weesaw Trailblazers is to ultimately encircle the marsh area at the center of township-owned land (from behind the Community Center to the Mill Road Park where the old camelback bridge Park and the cemetery) with a foot path.

“We think that would be a beautiful circuit trail that people can walk on and run on,” Kanoski said.

A third (and larger) footbridge is planned in another section of the path to reach the Tirrell’s Trail section, which offers a scenic view of the marsh. Hanover said he visited that area recently with New Troy settler (and Center of the World shop owner) Hosea Tirrell’s great-great-granddaughter Jorja Renwick.