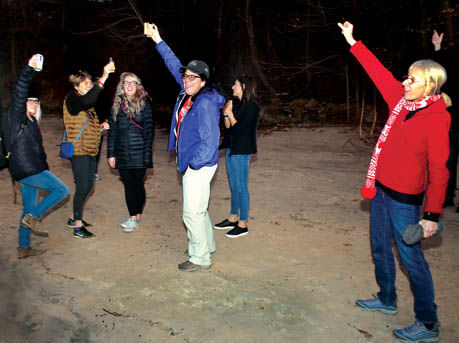 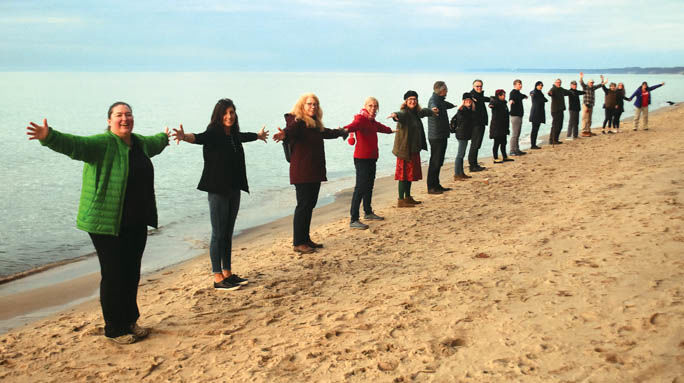 Most of the people participating in a Dec. 26 celebration of the state grant and local donations to expand Cherry Beach joined hands at the shoreline to symbolize the 400-plus feet of beach that will be added. 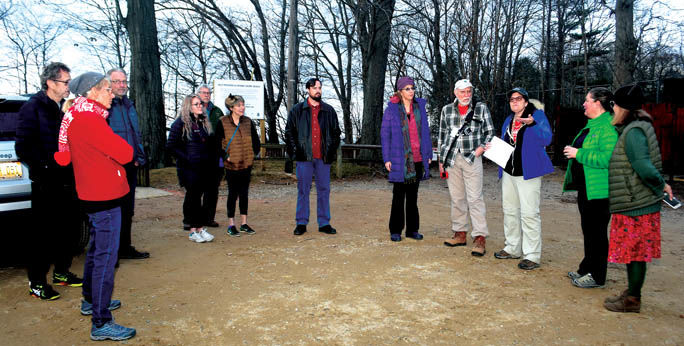 Talking about the four-year history of the effort to expand Chikaming Township’s Cherry Beach in the parking lot at the site on Dec. 26. 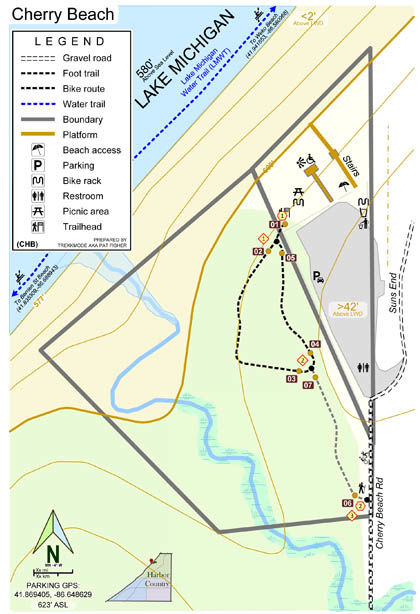 Most of the people participating in a Dec. 26 celebration of the state grant and local donations to expand Cherry Beach joined hands at the shoreline to symbolize the 400-plus feet of beach that will be added.

Talking about the four-year history of the effort to expand Chikaming Township’s Cherry Beach in the parking lot at the site on Dec. 26.

HARBERT — A sunset celebration of the successful effort to more than double the size of Chikaming Township’s Cherry Beach property was held at the site on a balmy Dec. 26.

“What we’re really here to talk about is our community and the 940-some people (from about 30 states) that pledged to find the rest of the money,” said Park Board member Janet Schrader.

It was recently announced that the Cherry Beach Project’s second attempt at securing a Michigan Natural Resources Trust Fund grant providing 60 percent of the funding ($2.475 million) toward the township’s purchase of the undeveloped three-acre lakefront parcel that borders Cherry Beach to the south was successful.

Currently under the ownership of the Reed Beidler Trust, the property features, along with an expansive beach, old growth forest along a critical dune.

The acquisition will increase the size of the public beach (originally donated to the township by the Warren Family in 1922) from 253 feet to 657 feet and will protect it in perpetuity for future generations. The 40 percent match (including a $250,000 donation pledge from the township) totals 1.65 million in donation pledges.

Schrader said the Dec. 26 gathering was “an impromptu sunset salute to cheer all the people that helped make this project happen.”

“This has been four years of our life,” she added.

Schrader thanked Cherry Beach Committee members, Park Board members, “all sorts of foundations,” businesses, nearby lakefront property owners, (including “Hometown Hero” Sasha Boersma), and the many other people “who came together to make these parts move.”

“I personally received a phone call from a lady who hadn’t been here in 30 or 40 years, but she had childhood memories and she heard about the project. And she donated a great chunk of money,” Schrader said.

“This is an absolutely fabulous community to live in,” she added.

Also given credit for making it happen was Township Supervisor David Bunte.

“David was the one who convinced the owner to sell the property to the township … that was a really critical piece,” local resident Sarah Doty said.

Schrader said seeing the way people in the community rallied around the effort to keep Cafe Gulistan owner Ibrahim Parlak from being deported convinced here they would do the same to preserve the undeveloped land at Cherry Beach.

Schrader said the property owner of the adjacent land had obtained a permit from the state to remove 100 trees and build a large home on the site (and according to Schrader quickly put it up for sale for $4 million) — and only neighboring property owners could object.

Doty said a woman in her 90s at the time ended up writing a letter that triggered a public hearing.

Schrader thanked Kristy Putnam for “doing a marvelous job” of alerting the public to attend the hearing, which was held at the Township Center.

“Kristy alone got like 350 people to the hearing. It was packed house out the door,” Schrader said.

She added that a public posting at a local post office kept vanishing, but the postmistress kept putting new ones up.

Schrader said since people think the property was already thought of as being part of Cherry Beach, it was decided to “just buy it.”

The current Cherry Beach public acreage is approximately 1.9 acres, with 2.55 acres to be added with the new property (not including the beach itself). Most of the upland area of the current property is parking lot, with a slice of dune-top that features a viewing platform and the stairway to the beach. If a home had been built on the adjacent, property it could have been very close to the Cherry Beach lot.

Park Board member Jill Underhill said the new land is wooded and includes some old-growth trees.

She noted that the pledge money now has to be secure.

“Everybody who did make a pledge should have received an email from the people who are collecting the money  — now (they) actually need to give the money that they pledged.”

“The whole process, including the grant work (and arriving at a final sale price with the seller), will take the next year.”

Pat Fisher of Harbor Country Hikers was on hand to join in the celebration and talk about a low-impact educational trail planned for the new property (which would be accessed off the existing parking lot). Schrader said the Hikers offering to establish that trail gave the grant application effort more positive “points.” She said a partnership with Chikaming Open Lands slated to include educational hikes also helped.

A map shown to those participating in the Dec. 26 gathering illustrates a proposed path for the trail. Schrader said public input and a vote by the Park Board will determine the final arrangement.

Fisher told those assembled at the Cherry Beach parking lot that they were standing on “sand dune sand” which he noted is more stable than blown-in sand … which comprises much of the lakefront.

Eventually the 25 or so people made their way to the shore where they held hands to cover as much of the 400 new feet of shoreline as possible before toasting the expansion project’s success (thanks to a wonderful community) at sunset.

Schrader said Cherry Beach is two and a half years away from marking its 100th year as a township property.

In addition to a ribbon-cutting ceremony to celebrate the expansion sometime in 2020, Schrader she hopes to do “an art project (for the 100th anniversary) here to thank people — I’m thinking beach stones.”

“Everybody here helped give Cherry Beach a huge birthday present, and it’s for the next generations.”