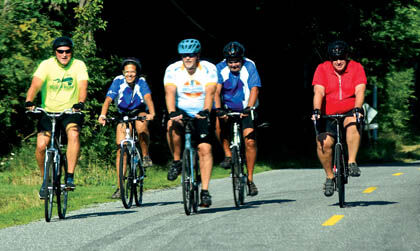 A group of cyclists pedal their way down Kruger Road near Three Oaks on a recent afternoon. 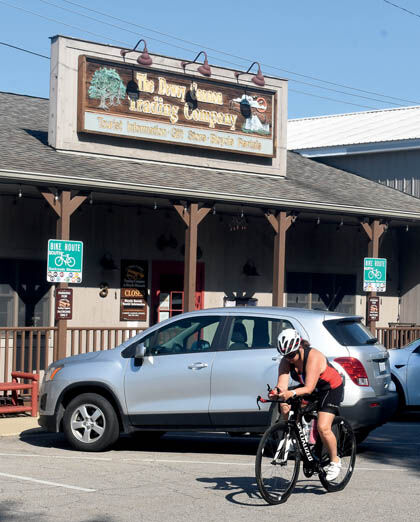 A bike rider starts their journey near the Dewey Cannon Trading Post in Three Oaks.

A group of cyclists pedal their way down Kruger Road near Three Oaks on a recent afternoon.

A bike rider starts their journey near the Dewey Cannon Trading Post in Three Oaks.

THREE OAKS — Bicycling is a popular activity on local roadways, but the final Sunday in September won’t see the usual exponential increase of two-wheeled traffic because the 2020 Apple Cider Century bike tour has been canceled.

According to the following letter to “Dear Apple Cider Century Riders” posted by Executive Director Bryan Volstorf on the official Apple Cider Century website (www.applecidercentury.com/ ): We regret to inform you after much debate and deliberation we have decided to cancel the Apple Cider Century Tour for 2020. The safety and health of the participants, volunteers, and our community at large is our prime concern. As the organizers of many large events across the nation have agreed, we are not able to effectively run our tour while meeting CDC guidelines. Even though we are one of the later rides, we had to make a decision based on current conditions as we would now normally begin our final preparation for materials and volunteers.

Registration will be closed for the 2020 year. Riders that have currently signed up for 2020 will have their registrations applied to the 2021 ACC ride. Registration for 2021 will begin immediately.

Please call us with any questions or concerns regarding your registration and we will do what we can as promptly as possible, but please be patient as we are not set up for a large influx of inquiries. Contact us at 269-208-4255.

We truly love our riders and all of the camaraderie, spirit, and fun you bring to our event. We will miss everyone this year and hope to see you Sunday, September 26, 2021!

Volstorf said all who had signed up for the ride by mid-summer (1,400 versus the normal 2,500 or so) can choose to keep their entry (including the rider number) for the 2021 Apple Cider Century, or opt to get a refund. He added that most have so far opted to transfer their registration to next year.

He noted that the Dewey Cannon Trading Company store, the Three Oaks Bicycle Museum, and bike rentals at the site are all closed during the pandemic. Backroads Bikeway maps are still available outside the Trading Post (and online), and Volstorf said he has made and installed bike route signs over the 300 miles in the area.

In addition to the Apple Cider Century event, the Three Oaks Spokes Club maintains the Backroads Bikeway trails which provide 20 self-guided tours on paved area roads, with lengths from 5 to 60 miles with some passing by area attractions such as the New Buffalo Railroad Museum, Warren Woods State Park and Warren Dunes State Park.

It’s not all quite during the pandemic.

“There are lots of riders here all the time,” Volstorf said, noting that he often sees small groups of cyclists on area roads, and they often begin and end their journeys around Dewey Cannon Park.

A GoFundMe drive for the Three Oaks Spokes Bicycle Club is under way.

The club is a volunteer-run non profit established in 1974 to promote and encourage cycling in Southwest Michigan/Northwest Indiana. The GoFundMe drive was launched due to the current lack of bicycle rentals, visitor donations and registrations for the club’s annual Apple Cider Century with the goal of raising $50,000 to continue the services it has offered for over 35 years such as housing and retaining ownership of Bicycle Museum artifacts and the Dewey Cannon Trading Company/Information Center/bike rentals, sponsoring club rides and activities, offering Backroads Bikeways bike routes and community engagement through the Apple Cider Century. The Go Fund  Me site is: https://charity.gofundme.com/o/en/campaign/keep-the-three-oaks-spokes-bicycle-club-rolling.