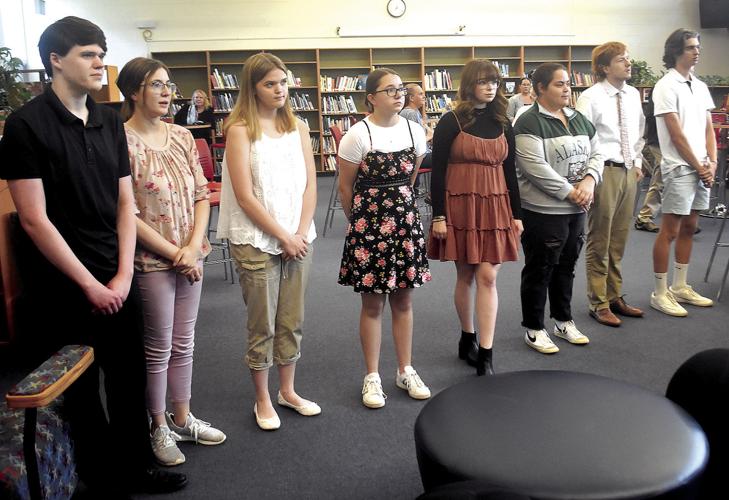 River Valley High School Top Seniors from the Class of 2022 are recognized during the May 23 Board of Education meeting. 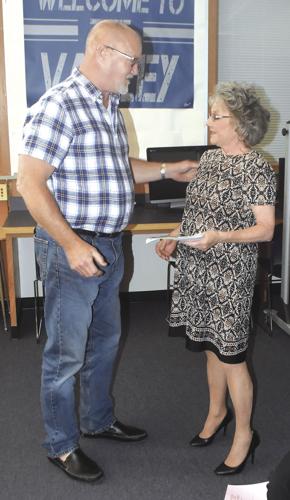 River Valley Board of Education President David Whitlow with retiring teacher Pam Kaniuga during the May 23 meeting.

River Valley High School Top Seniors from the Class of 2022 are recognized during the May 23 Board of Education meeting.

River Valley Board of Education President David Whitlow with retiring teacher Pam Kaniuga during the May 23 meeting.

THREE OAKS — The River Valley Board of Education during its May 23 meeting awarded bids for the School Construction Consolidation Project that will result in an all-grades facility at the site of the current middle/high school.

Skillman Corp. Vice President Michael Kounelis said a pre-construction meeting is planned for June 2, “and then shortly thereafter you’ll see mobilization happening onsite. The focus will be on the new addition (the elementary school wing) right away, but there will also be phased renovation that will commence this summer and continue on all the way through the school year until completion next year. So it will be done very selectively, isolated.”

“There will be construction in some form or fashion going on inside the building over the course of the next year,” Kounelis said.

He thanked the district’s administration team, adding “It’s been a heavy lift to get where we are.”

“We’ll keep the board and the administration very well informed on how things move forward.”

The new facility is expected to be finished in time for the 2023-24 school year.

During the board’s Dec. 13, 2021, meeting, Cordogan, Clark & Associates Architectural Designer Cayce Horton went over renderings of the building’s new look, including exterior views of the blue-hued elementary wing, which is separated from the older grade areas inside, and floor plans showing the layout of classrooms and other facilities. Parent drop-offs and pick-ups will take place in the front while a new bus loop will be added behind the facility. There will be separate entrances for elementary and middle/high school pupils. A playground area will be located on the south side of the building adjacent to the elementary wing.

The existing media center where Board of Education meetings are held will be transformed into a multi-purpose cafeteria/gym area for elementary pupils under the conceptual design.

During the December meeting, Kounelis said just under 14,000 square feet of the project is new construction, while 108,000 square feet is the existing area where renovation is planned.

The majority of revenues will come from an 18-mill levy and a .75-mill sinking fund tax.

“These are students who not only are high-achieving in the classroom, but I think almost every single one of them is either a leader or a contributor in multiple co- and extra-curricular events,” said Middle/High School Principal Ryan Portenga.

The Class of 2022 Commencement Ceremony is scheduled for 7 p.m. Thursday, June 2.

He added that as Science Chair she led the science curriculum study this past year and has sponsored National Honor Society, coached track and cheerleading, led trips to Central America, Mexico, Spain and Washington, D.C.

“Everything about Mrs. Kaniuga is class and grace and her kids love her,” said Board President David Whitlow, who added her positive influence on countless River Valley graduates will be felt by them and the community.

“It’s been great. My administrators, the board members, everyone’s treated me quite well,” Kaniuga said.

Also on May 23, the River Valley Board of Education:

• Approved a July 11-Aug. 11 Summer Camp Program in partnership with the Boys & Girls Club of Benton Harbor funded by a grant from The Pokagon Fund.

• Agreed to hire Heather Willsey as a third-grade teacher.