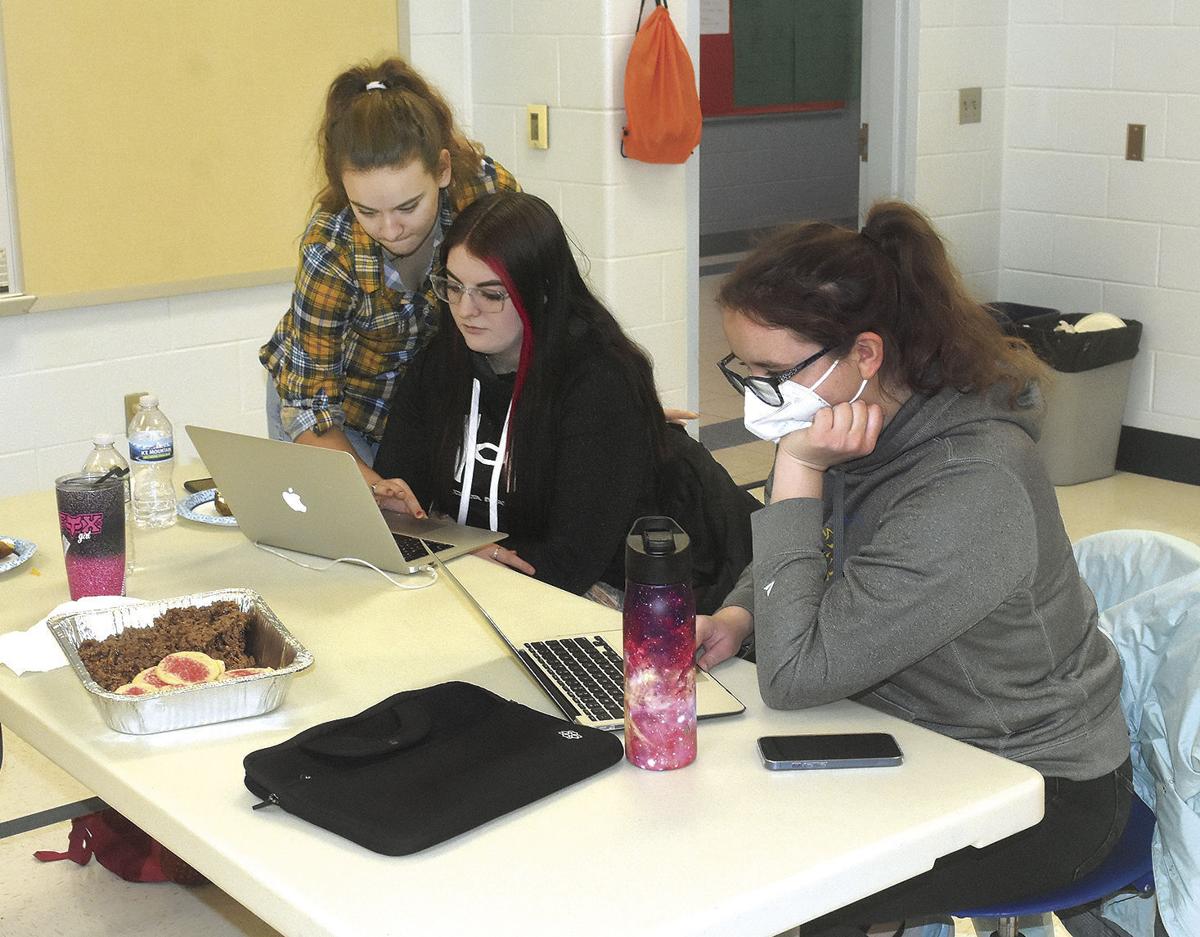 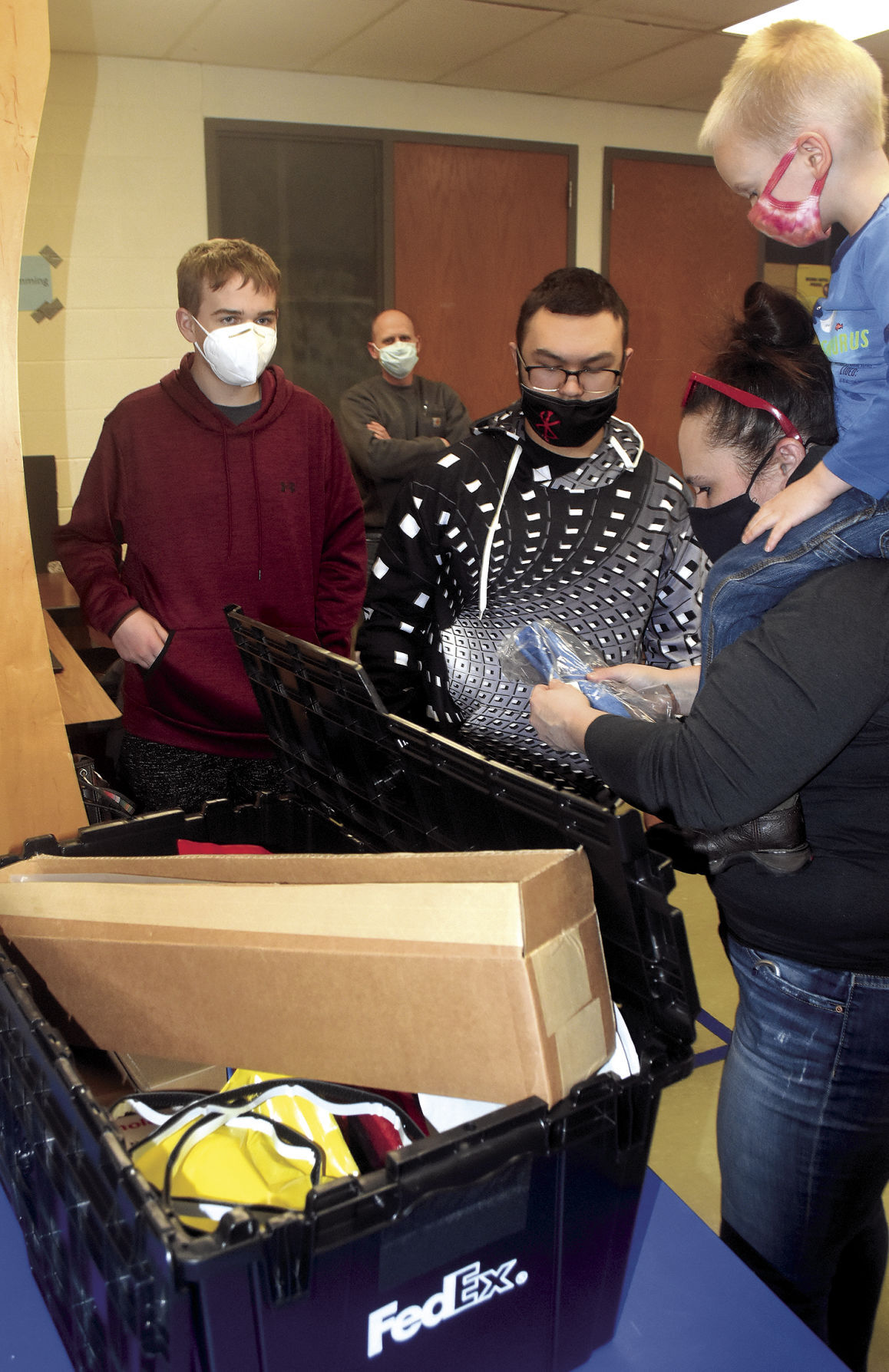 Checking out the “Kit of Parts” for this year’s RAPID REACT robotics competition on Jan. 11 are (from left) Jayden Witter, Mike Jones, Gage Orman, Jenny Jones and Ben Jones of the RV Gearheads. 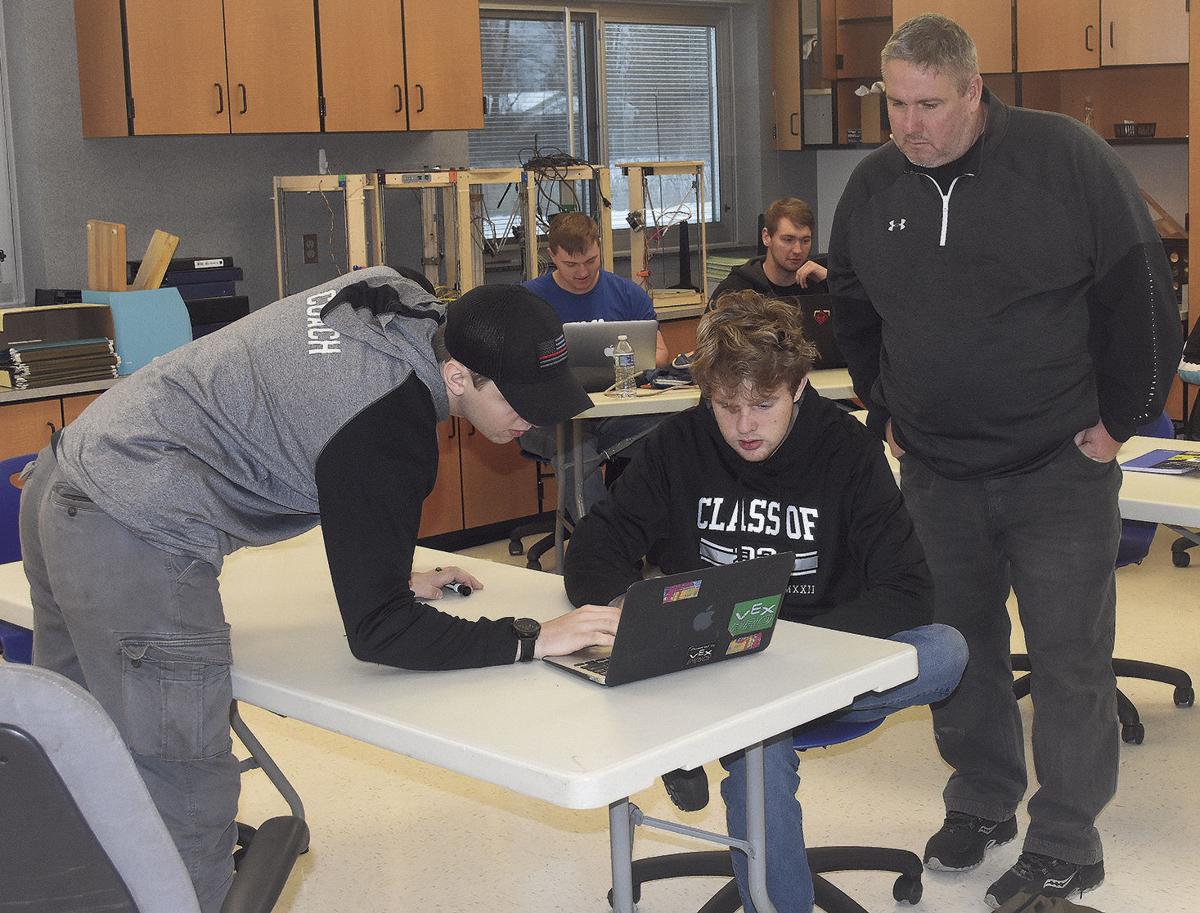 Noah Sharum, Chris Mejia and Darrick Fairchild (from left) of the Bionic Bison robotics team begin preparing for the 2022 season. 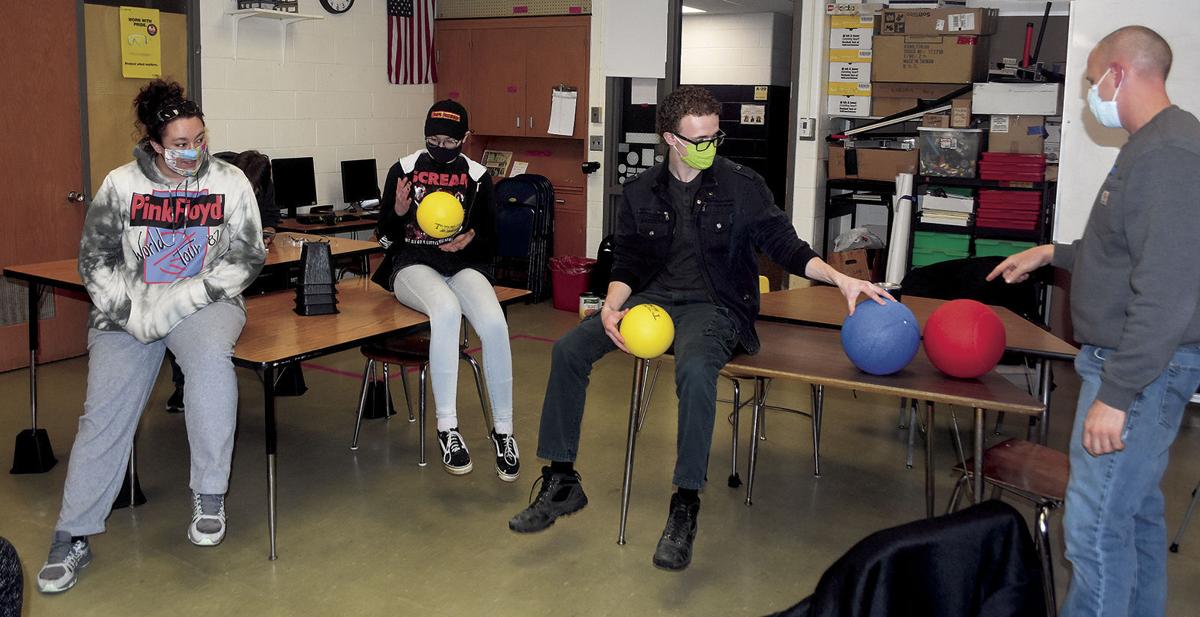 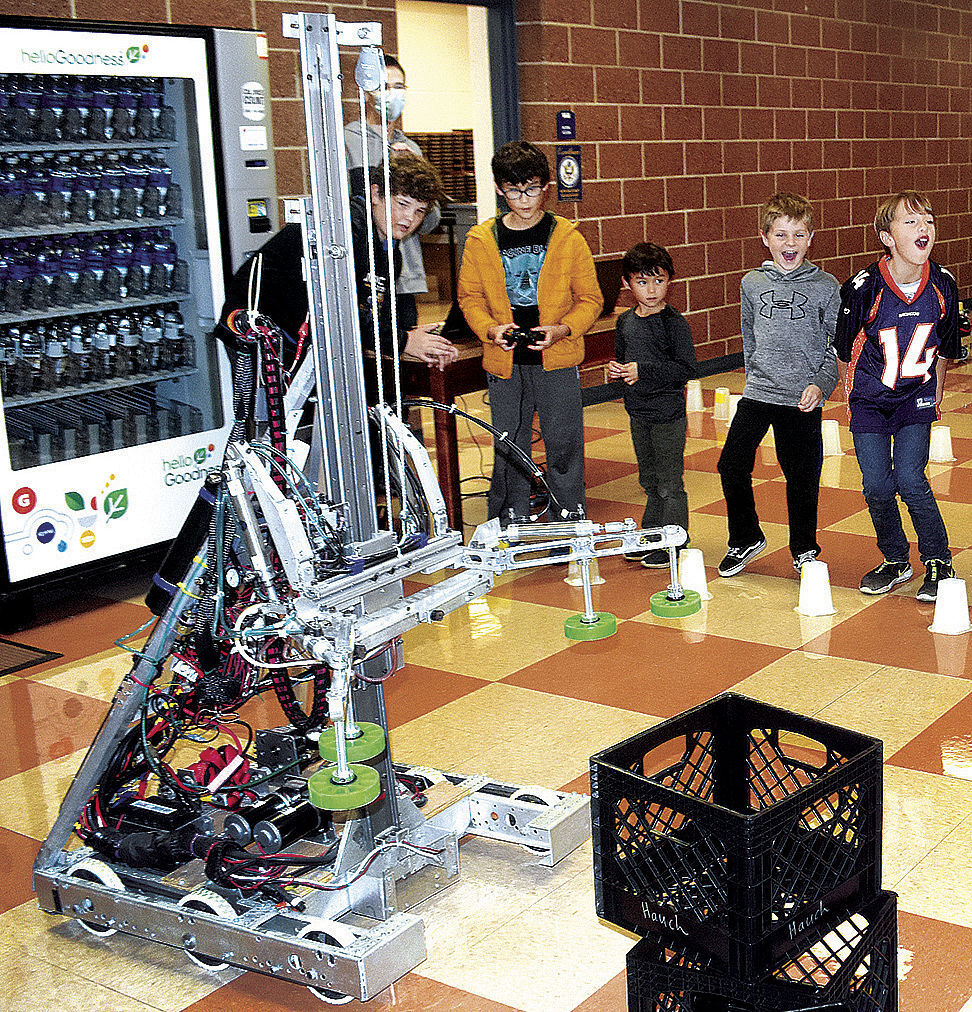 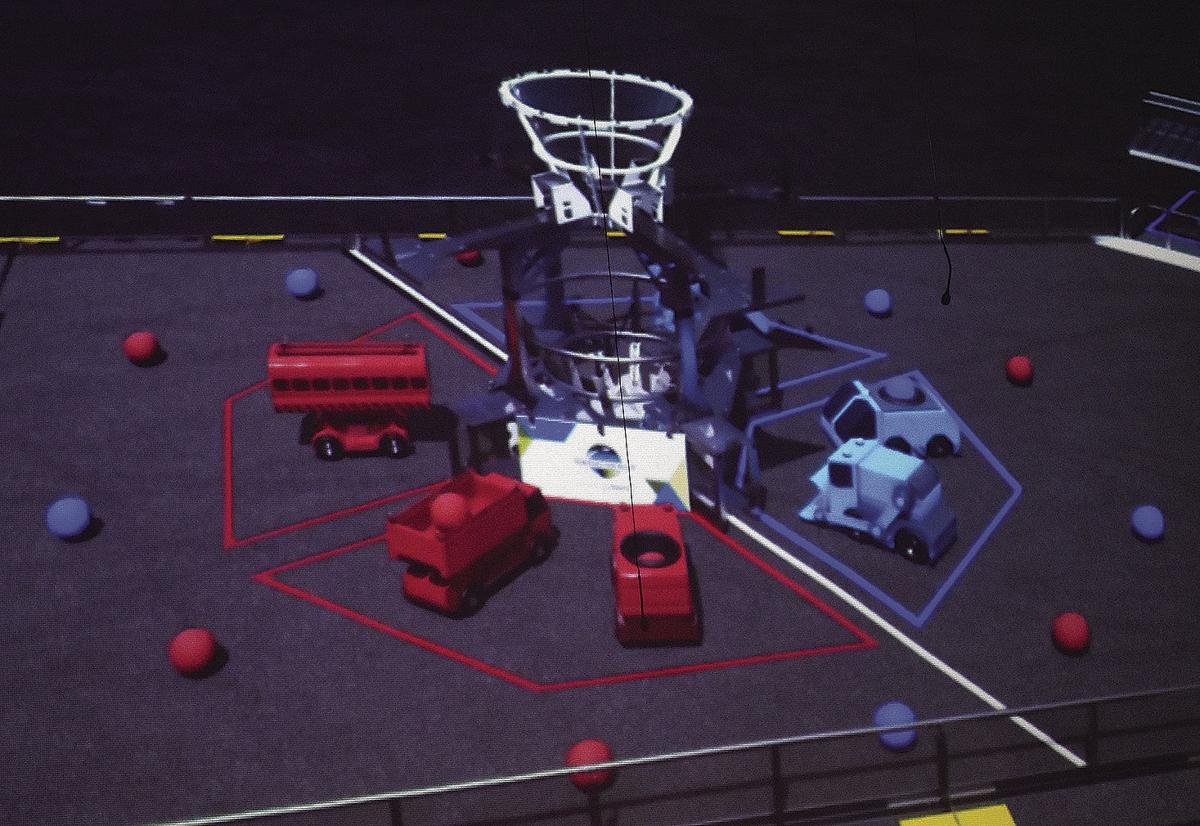 A depiction of the RAPID REACT competition field.

Checking out the “Kit of Parts” for this year’s RAPID REACT robotics competition on Jan. 11 are (from left) Jayden Witter, Mike Jones, Gage Orman, Jenny Jones and Ben Jones of the RV Gearheads.

Noah Sharum, Chris Mejia and Darrick Fairchild (from left) of the Bionic Bison robotics team begin preparing for the 2022 season.

A depiction of the RAPID REACT competition field.

NEW BUFFALO — The New Buffalo and River Valley high school robotics teams have eight weeks to get ready for the March 10-12 competition in St. Joseph.

Details about the FIRST 2022 RAPID REACT game were unveiled during a Jan. 8 “Kickoff” livestream watched in real time by teams around the world including the New Buffalo High School Bionic Bison (the RV Gearheads began digging into this year’s challenge on Jan. 11).

“Our seniors were sophomores last time we had a season, and it was really only half a season,” said Darrick Fairchild, lead mentor for the Bionic Bison team at NBHS.

Sharum, a 2018 New Buffalo High School grad and alumni of the Bionic Bison, said the nearly two-year hiatus from robotics competition has left everyone a bit rusty.

“It’ll be fine, I think we’ll be where we were before.It’s just going to take a little bit longer to get there.”

Jenny Jones (one of the RV Gearhead team’s three lead mentors – the others are her husband Mike Jones and Paul Boughner) are working with a five-member team (with hopes to add a few more students): Raven Sanford, Emma Sanford, Jayden Witter, Jeremiah Smith and Gage Orman.

Also helping out as mentors are Amy Orman, Jacob Ashcraft, and Aiden Olson (Ashcraft and Olson are RV grads and Edgewater Automation apprentices).

RAPID REACT (presented by The Boeing Company) features two competing three-team alliances process cargo (in the form of oversized tennis balls) for transportation. Each alliance is assigned a cargo color (red or blue, based on alliance affiliation) to process by retrieving their assigned cargo and scoring it into a central two-level hub. Human players assist the cargo retrieval and scoring efforts from within their terminals. In the final moments of each two-and-a-half-minute match, alliance robots race to engage with their hangar to prepare for transport (there are three ascending “monkey bar-like” levels of rungs for robots to attach to and pull themselves up off the ground – the higher they go the more points they score for their alliance).

Each match begins with a 15-second autonomous period, during which time alliance robots operate only on pre-programmed instructions to score points by: taxiing from their tarmac and retrieving and scoring their assigned cargo into the hub. In the final 2 minutes and 15 seconds of the match, drivers take control of the robots and score points by: continuing to retrieve and score their assigned cargo into the hub and engaging with their hangar.The alliance with the highest score at the end of the match wins.

Fairchild said the climbing to three ascending levels at the end of each match is going to be tricky, and speed for moving around on the competition field is going to be a key.

Immediately after watching the Kickoff Bionic Bison team members began figuring out what their robot is going to be (it has a weight limit of 125 pounds) and going over the field.

Bukowski, one of the squad’s seniors, said there’s a lot going on in designing the 2022 robot, especially with the climbing challenge at the end of each match.

“I think it’s going to go good, especially with the people on this team,” she said.

Fairchild said the Bionic Bison probably won’t start building the chassis for their machine until the week after Kickoff.

“We don’t want to get ahead of ourselves with any one certain design, we want to stay open to everything for a couple weeks, and then we’ve got to lock it in,” he added.

Jenny Jones said durability is a priority for the RV Gearheads.

“Our goal is to have a functional robot for both competitions (the second one for both River Valley and New Buffalo is scheduled at Battle Creek Lakeview March 31-April 2) … We’re going to go out, enjoy ourselves and learn something,” she said.

In 2022, FIRST Robotics Competition is projected to reach between 55,000 and 81,000 high-school students representing approximately 3,200 teams. Teams come from nearly every state in the United States, as well as many other countries. Teams will participate in 59 Regional Competitions, 106 District Competitions, and 11 District Championships. In addition, approximately 450 teams will qualify to attend the FIRST Championship in April 2022.